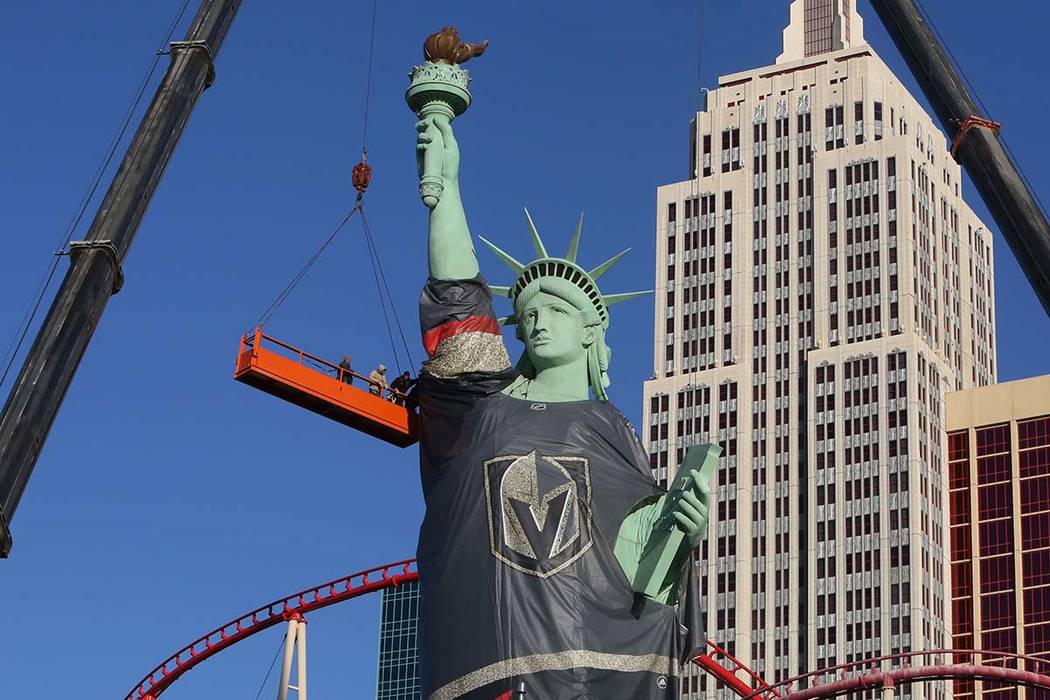 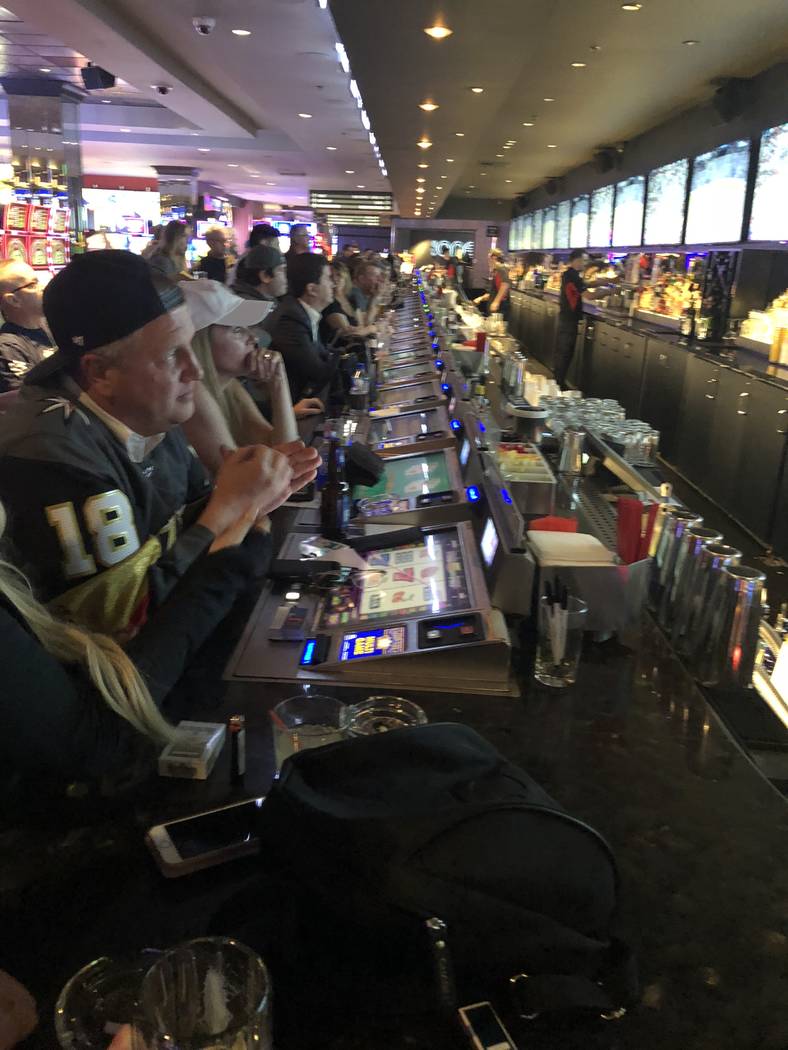 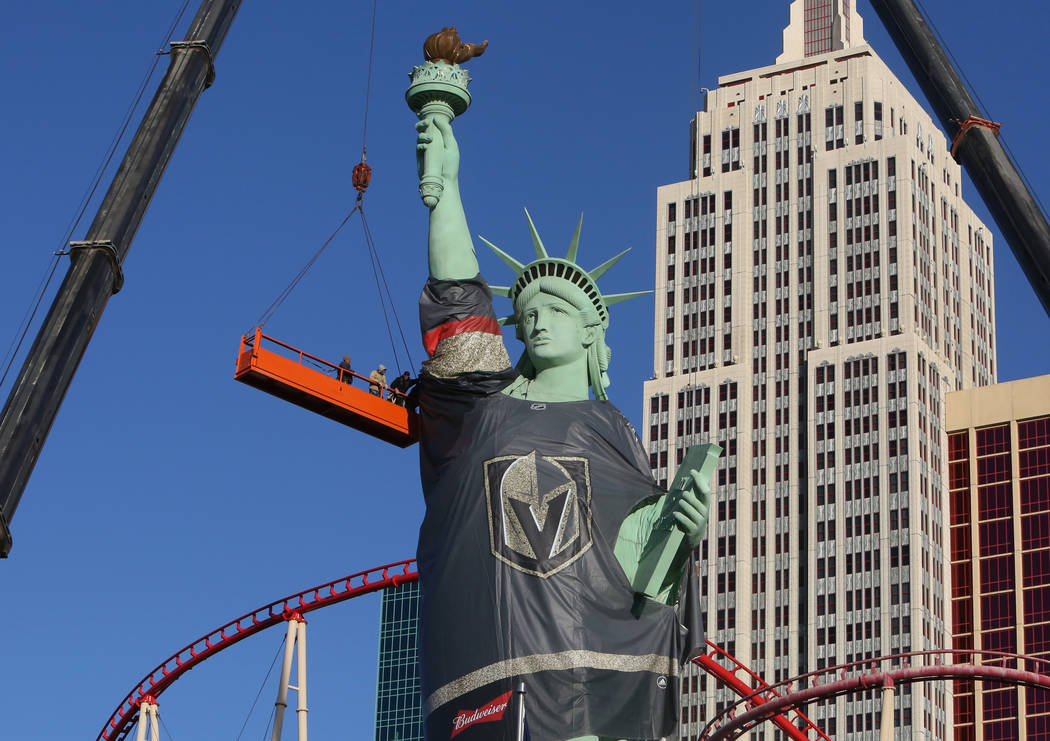 The Golden Knights are having an extraordinary first year in the NHL and are now just three wins away from the Stanley Cup Final. Fans have been spoiled with instant success, and the front office is cashing in.

But this being Las Vegas — a place built on excess and with a track record of getting slap-happy when all is good in the world — it’s worth asking: Is Las Vegas in a Golden Knights bubble?

Industry pros say the team’s on-ice success has helped fuel its booming off-ice business. Fans want to be part of a winner, and the Knights are making a historic inaugural-season run for the Cup, boosting demand for tickets and merchandise.

Things could deflate if the team gets bounced from the playoffs or has a weak start next season, but that’s “if” the Knights stumble so soon.

“I can’t imagine this bubble popping anytime soon because it’s a good team, and this is the first year they’ve played together,” said Matt Nyman, owner of the USA Hockey Store in Fashion Show mall. “They might be better next year.” 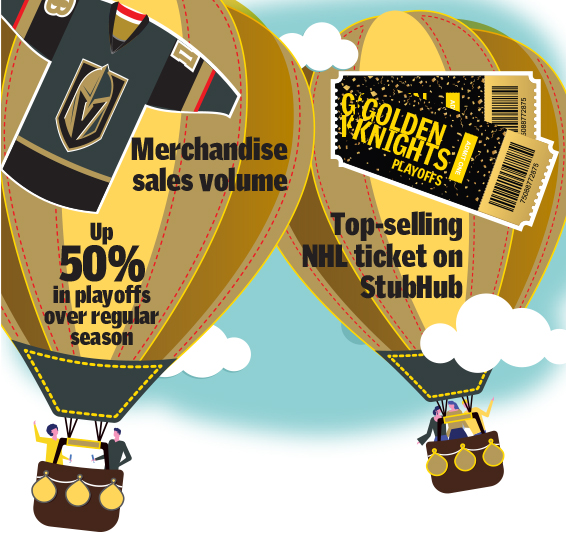 Brian Killingsworth, the Knights’ chief marketing officer, said he has “never seen a market react to a team like this, ever,” and the support has been “way above and beyond any of our expectations.”

He noted there is the “short-term novelty” of an expansion team in a market “that was hungry” for a major professional sports franchise. If the Knights had been a typical, struggling expansion team, business would have leveled off earlier, he said, but “we just kept getting better and better on the ice.”

Expansion teams — with their new logos, color schemes and fan base — often have strong merchandise sales. The Knights had robust sales early on, but as the team kept winning, its sales “quickly jumped” into the top five in the NHL in the second half of the season, helped by more buyers outside Las Vegas, said Jim Haskins, the NHL’s group vice president of consumer products licensing.

Of course, Las Vegas has had boom times before. Its housing bubble of the mid-2000s was perhaps the most bloated in the country, with soaring property values, nonstop construction, widespread flipping and easy money everywhere. The market’s crash all but toppled the local economy.

Even if the Knights have a plunge in business at some point, Las Vegas overall will be fine. But in some ways, the housing craze seems to have a whiff of similarity to the Knights’ opening year.

Signs of the fervor: The team had some Marc-Andre Fleury jerseys turned into three baseball hats and recently put them on display in the retail shop at the Knights’ practice rink, City National Arena. The hats cost $3,000 each and sold within hours.

The team, in a nod to Las Vegas’ area code, also sold 702 limited-edition posters for $70.20 each at City National. There were lines around the building for eight hours straight.

Online retailer Fanatics, which operates every NHL team’s shopping websites, has said the Knights led the league in merchandise sales through its network this season and had sold more merchandise this month than all other remaining playoff teams combined.

Knights’ playoff tickets also have been among the most expensive, if not the priciest, on the resale market in the NHL. On StubHub, a dominant resale site, the team had the league’s top-selling tickets during the regular season and still does in the playoffs.

Moreover, the Knights sold out their season tickets for the 2018-19 campaign by mid-March, before the playoffs started.

‘Greatest expansion team of all time’

New sports teams can be notoriously lousy, and hockey is no exception. The Knights, however, had the fifth-best record in the NHL this season and took the Pacific Division title.

They’ve won two rounds of the Stanley Cup playoffs so far and are tied 1-1 with the Winnipeg Jets for the Western Conference Final. Games 3 and 4 will be played Wednesday and Friday at T-Mobile Arena.

“Is this the greatest expansion team of all time, any sport? The answer is, absolutely,” Berry Tramel, a sports columnist for The Oklahoman, wrote this month.

Ultimately, every sports team has good and bad years, and fans love rooting for winners and easily bail on losers. StubHub communications manager Cameron Papp noted that demand for Knights tickets will depend on how well the team plays, and Nyman, of the USA Hockey Store, pointed out that teams can have hot streaks and that retailers simply try to capitalize on them.