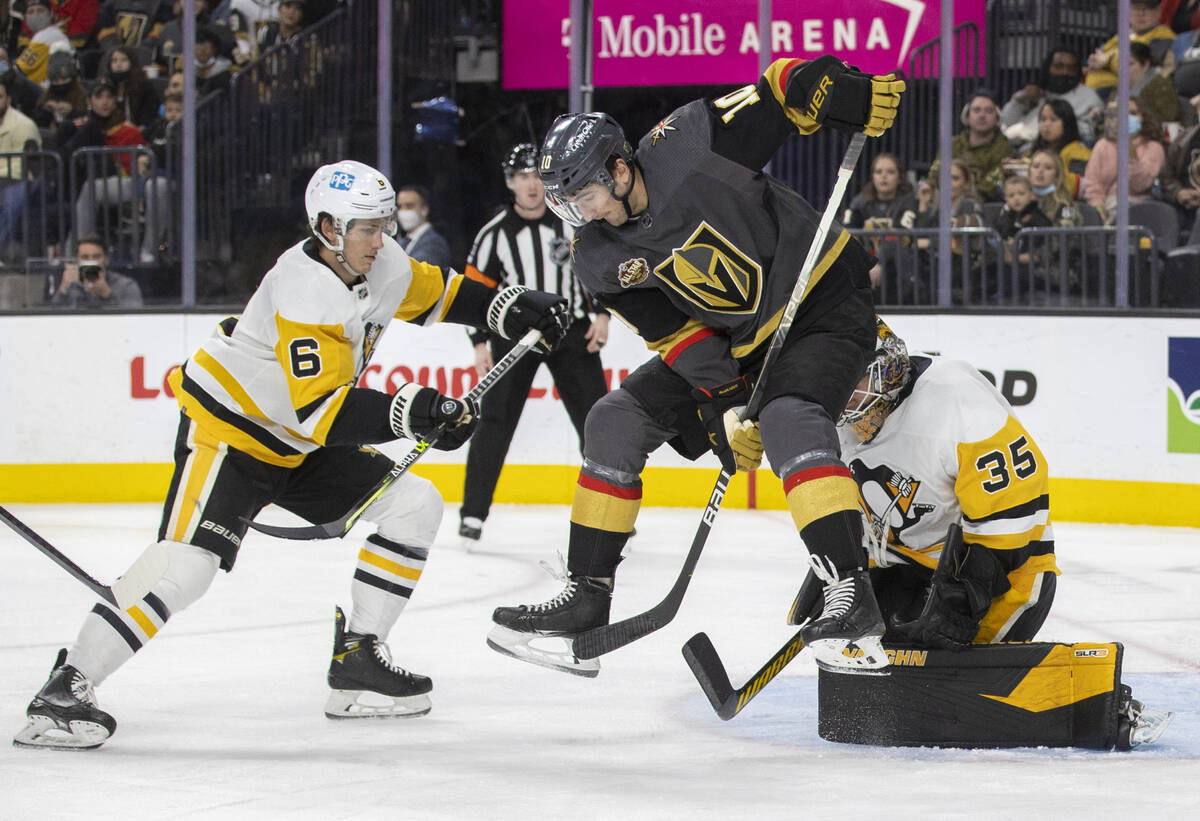 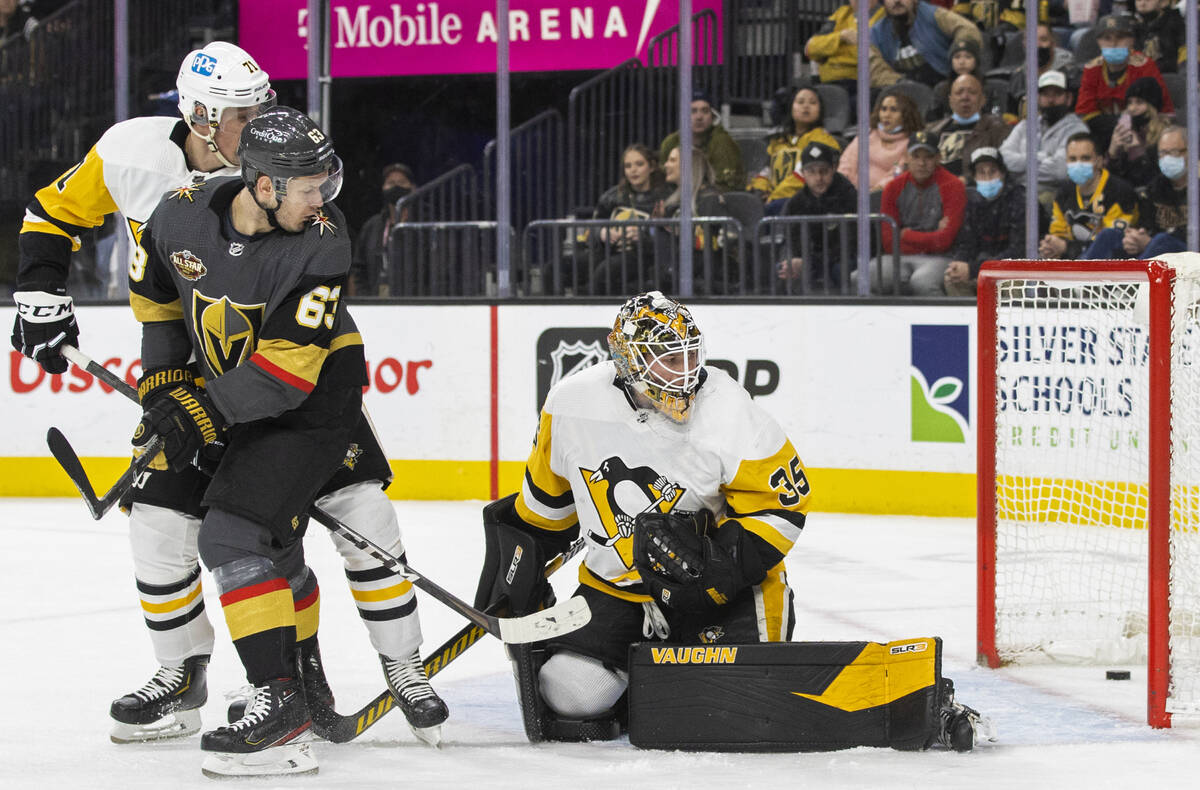 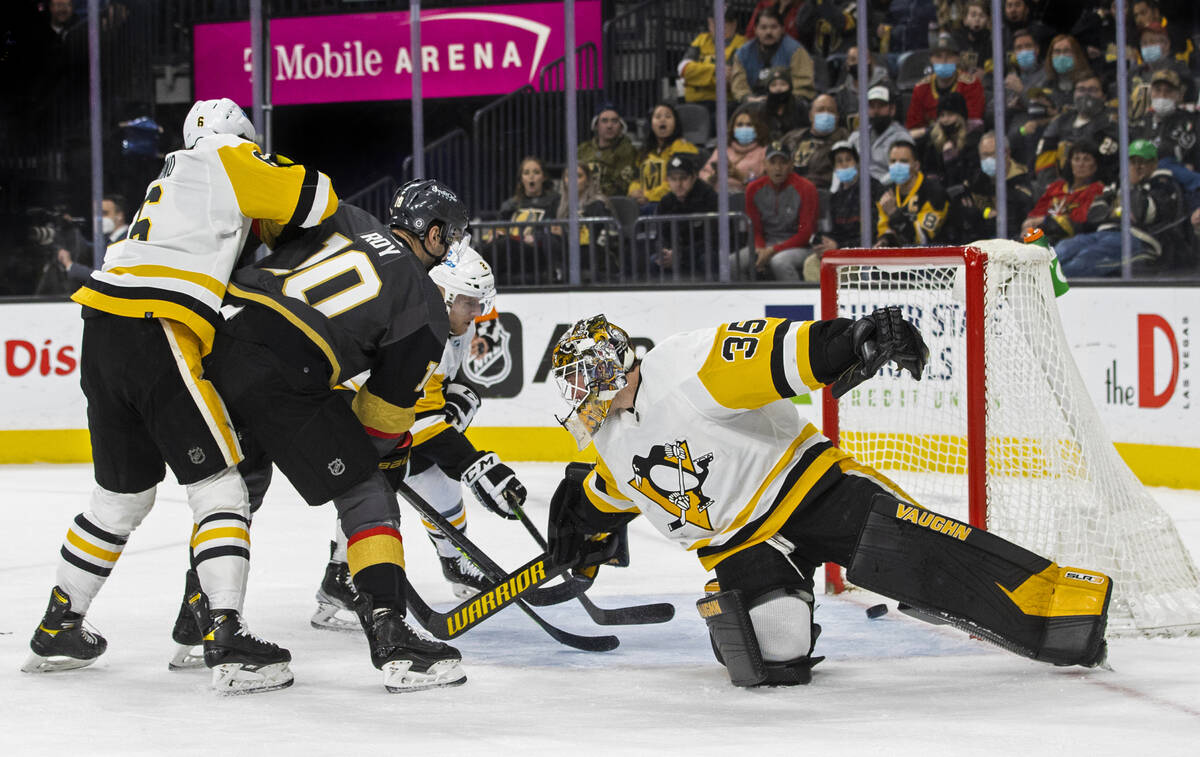 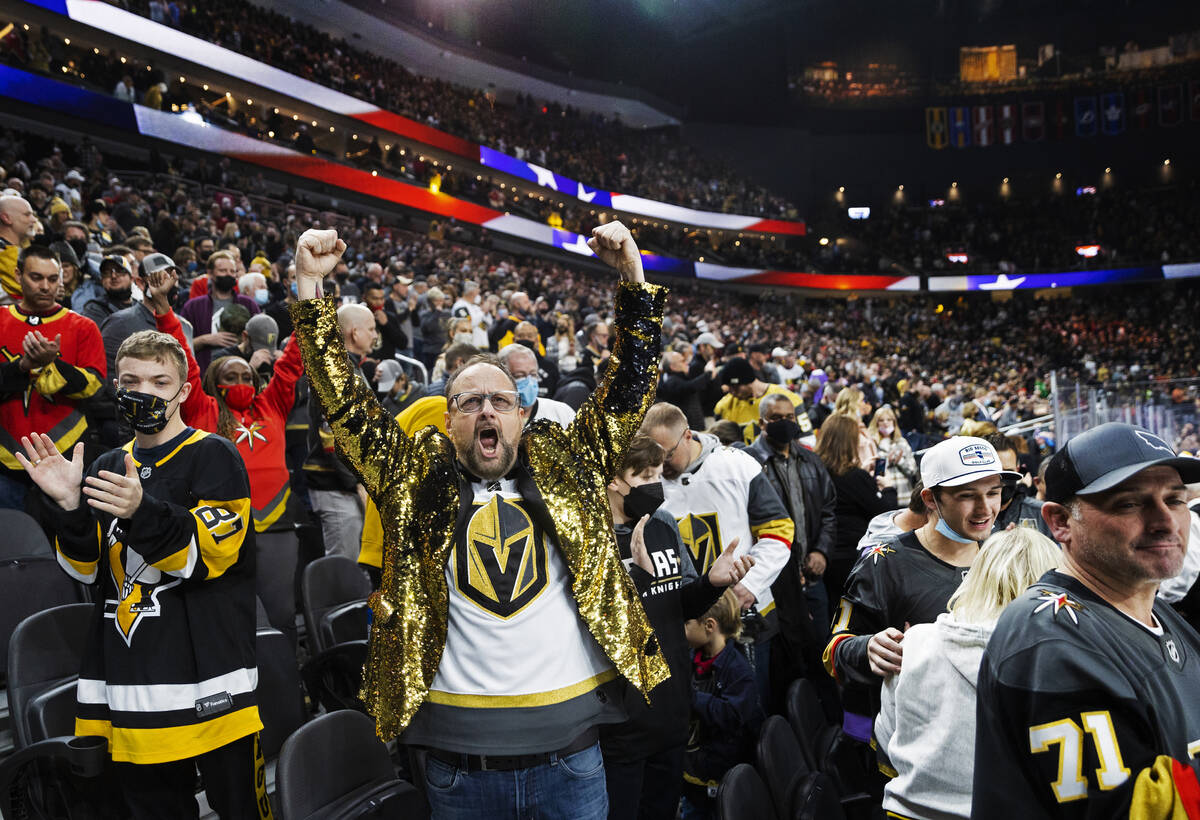 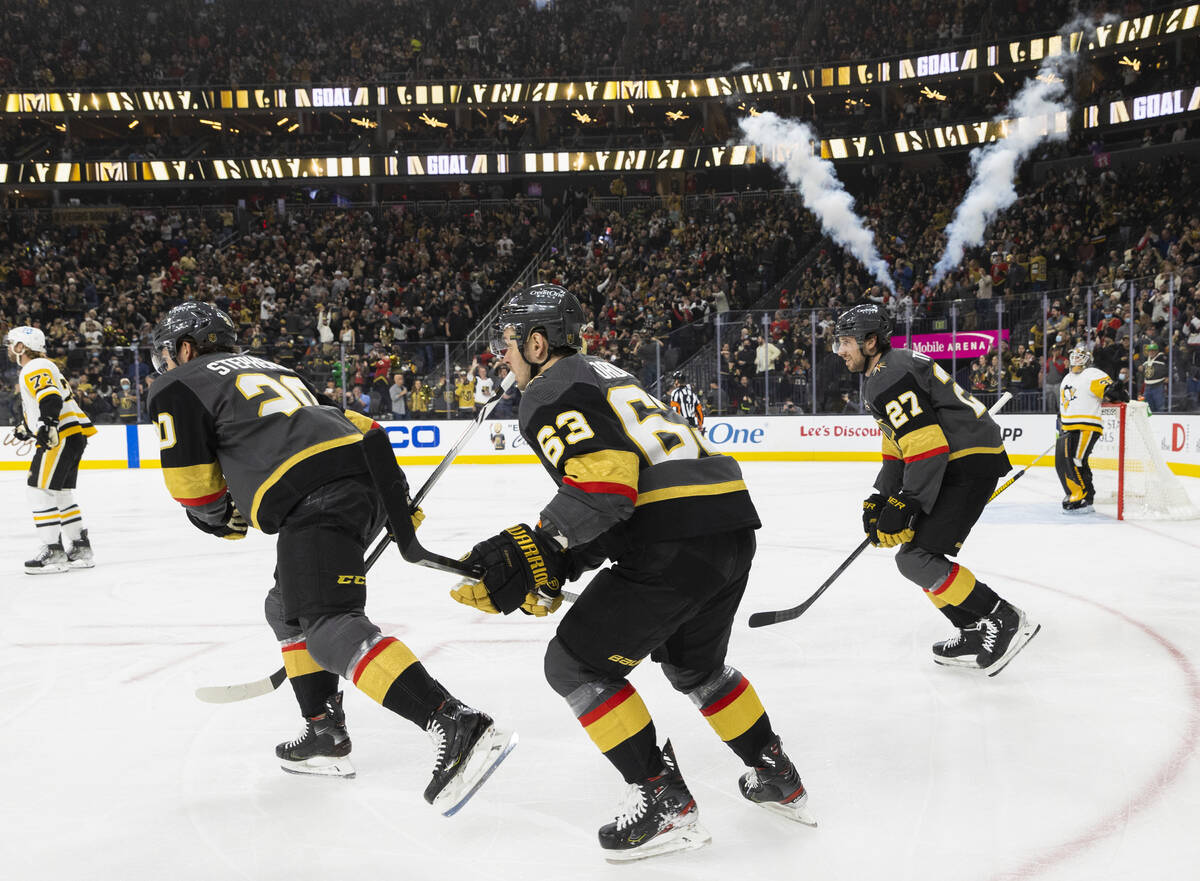 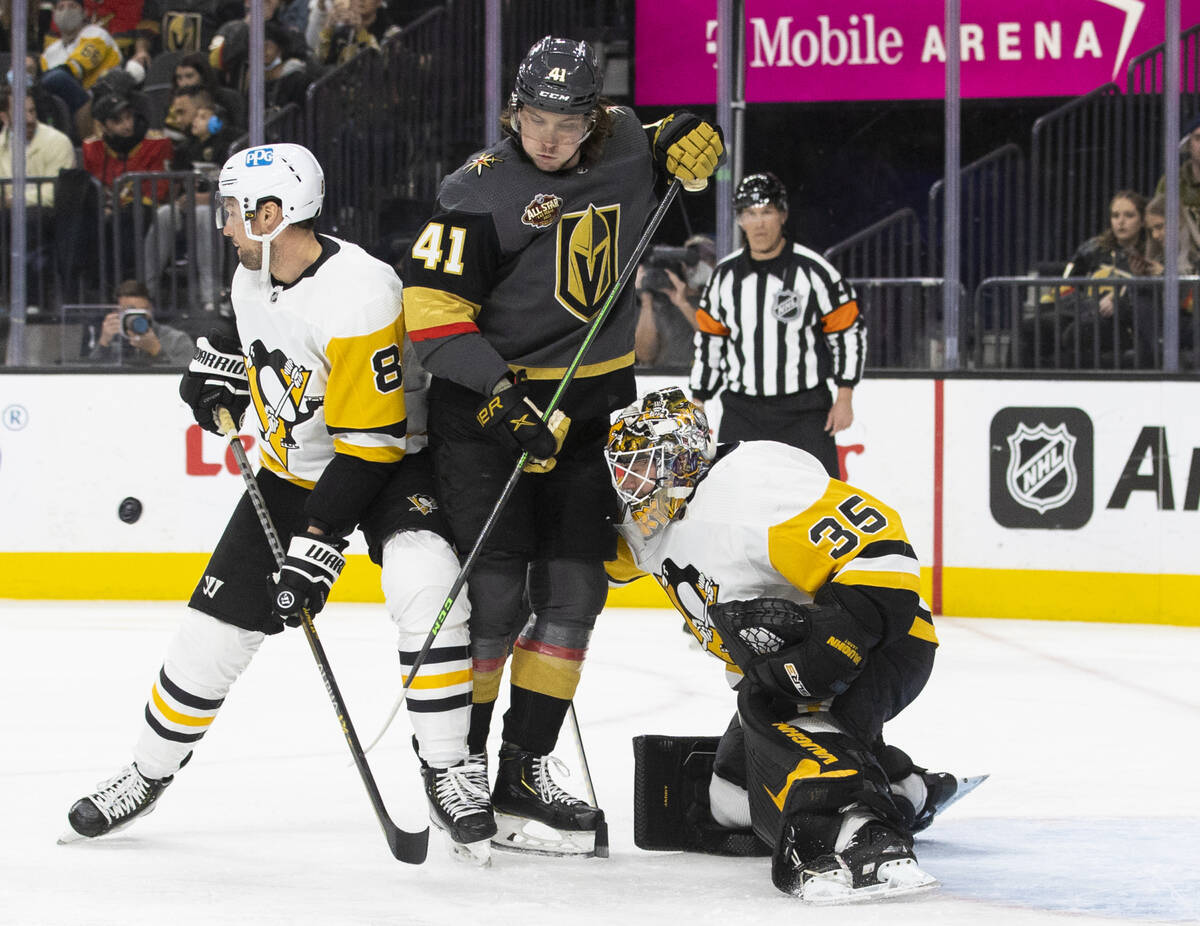 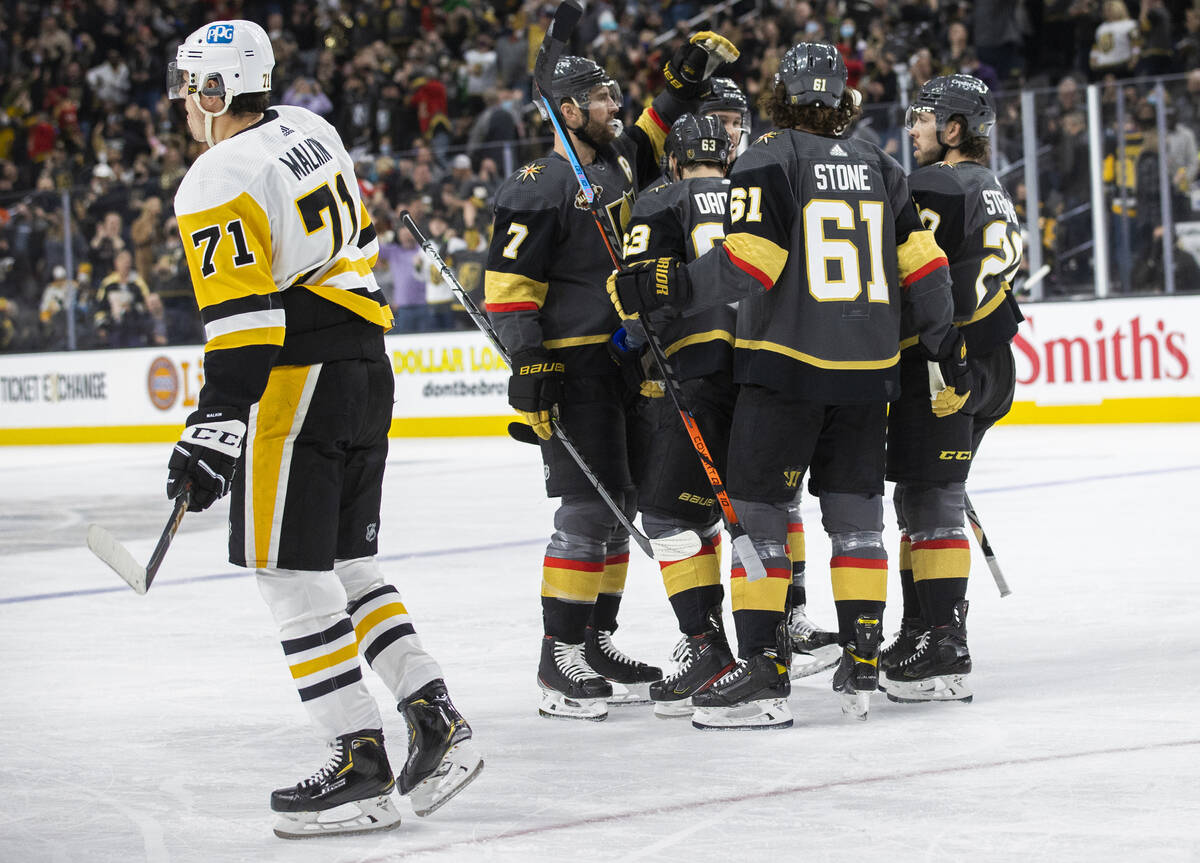 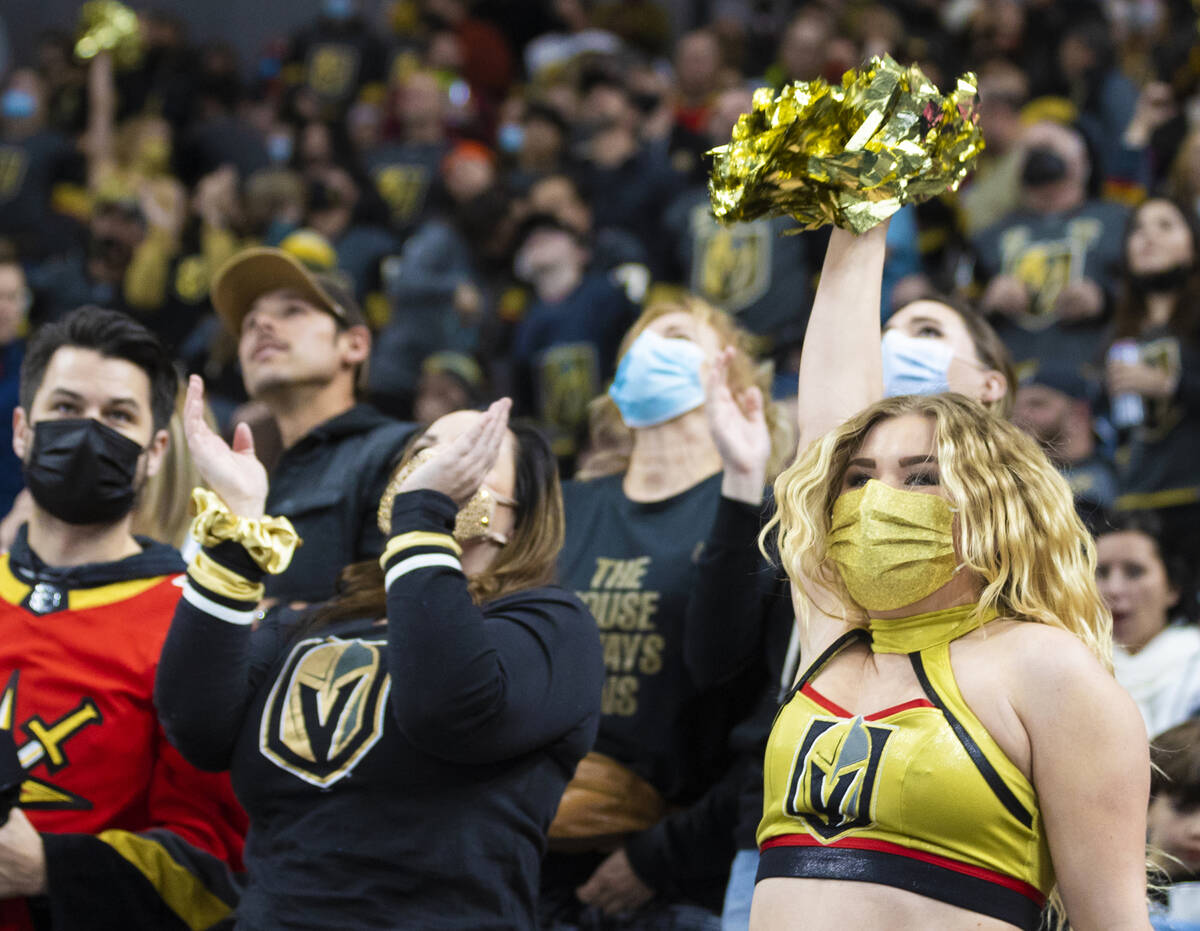 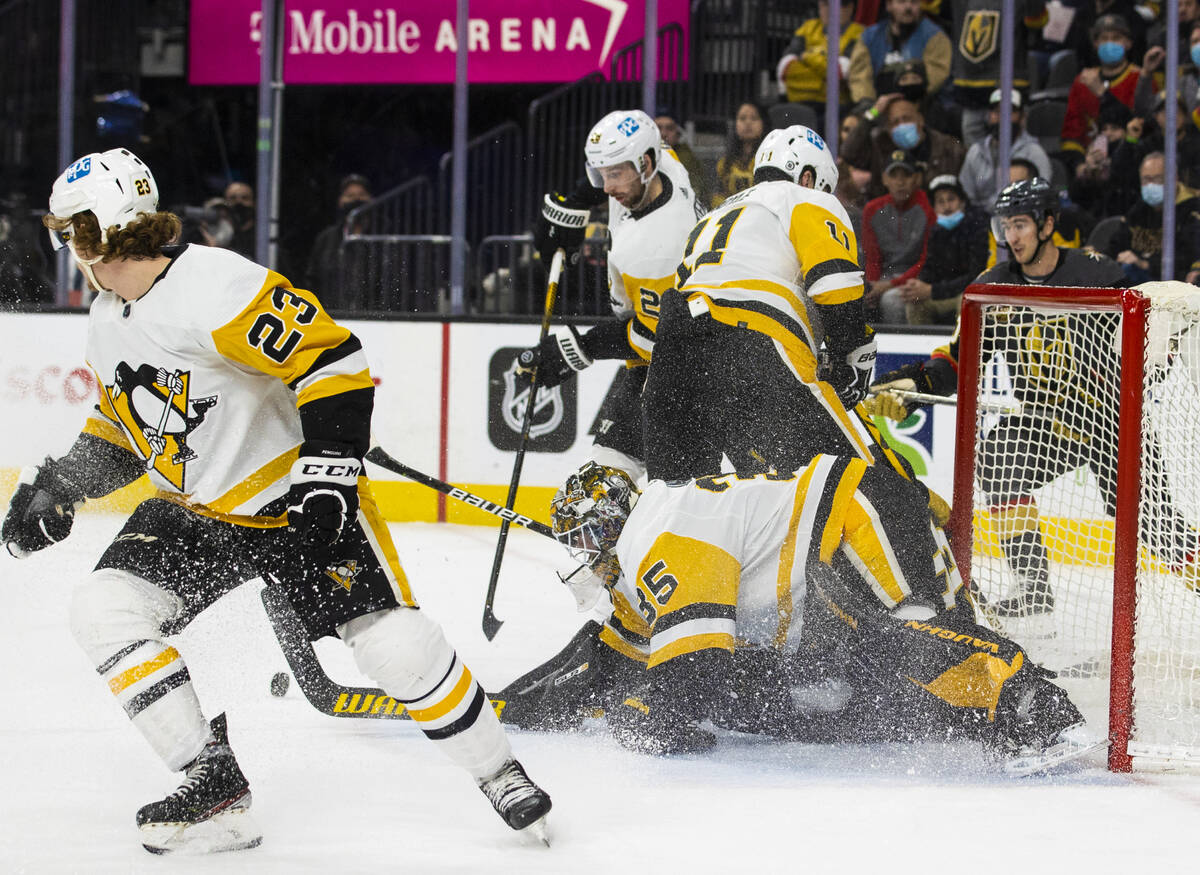 Pittsburgh Penguins goaltender Tristan Jarry (35) makes a save in the first period during an NHL hockey game against the Golden Knights on Monday, Jan. 17, 2022, at T-Mobile Arena, in Las Vegas. (Benjamin Hager/Las Vegas Review-Journal) @benjaminhphoto 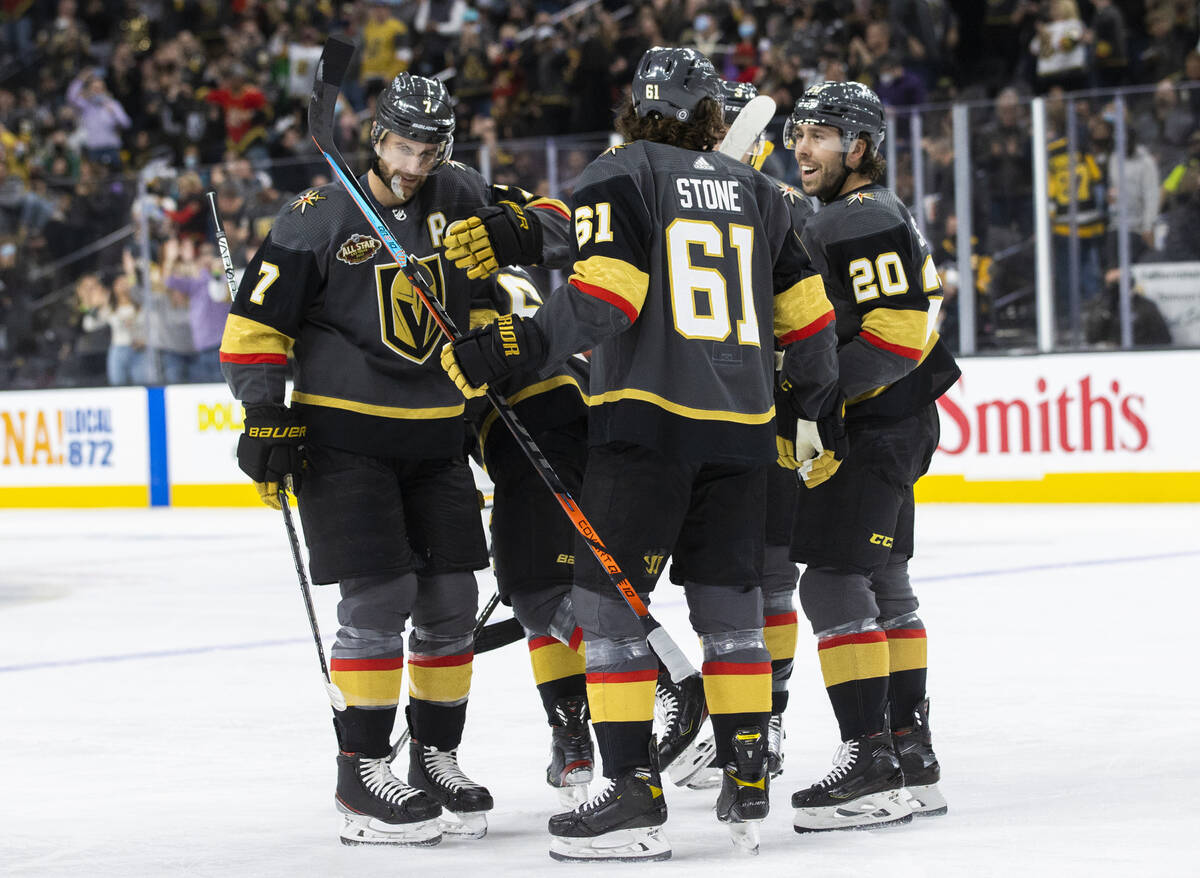 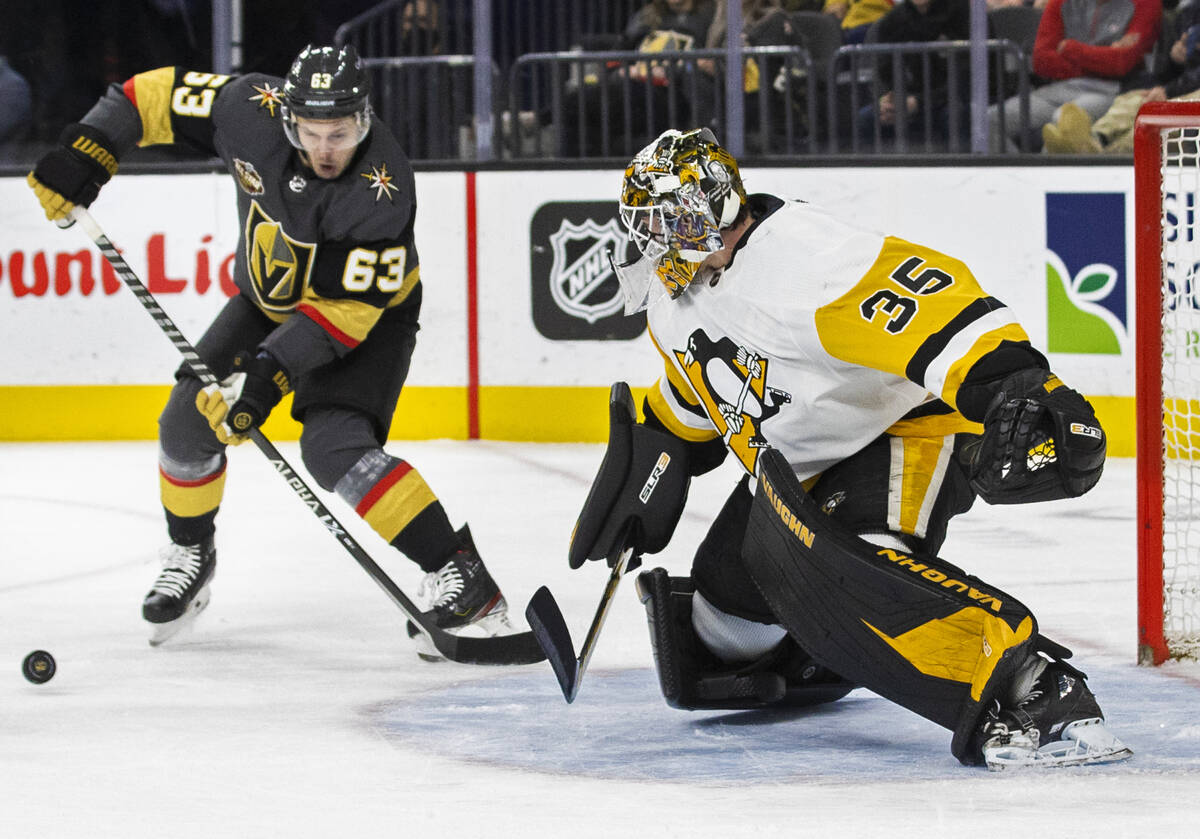 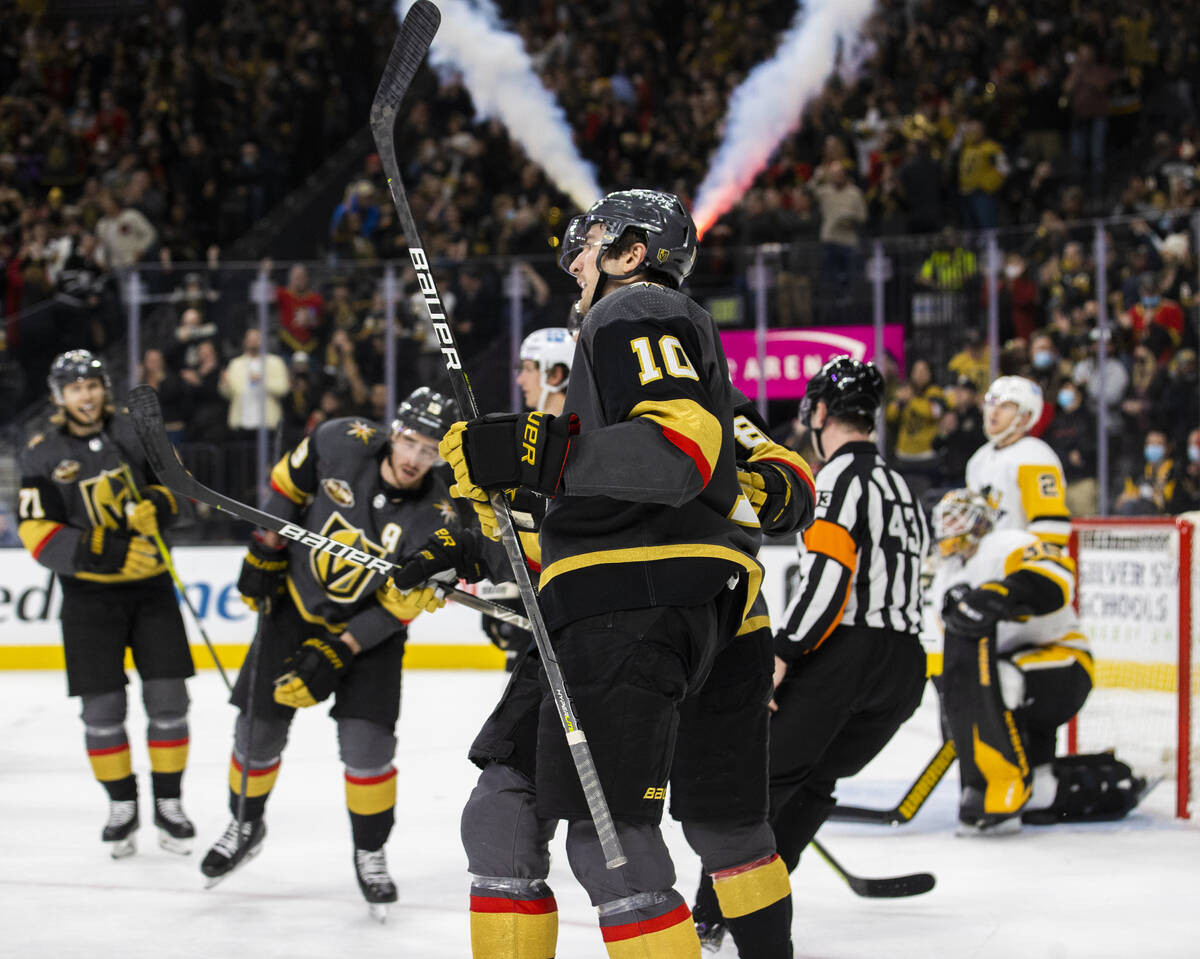 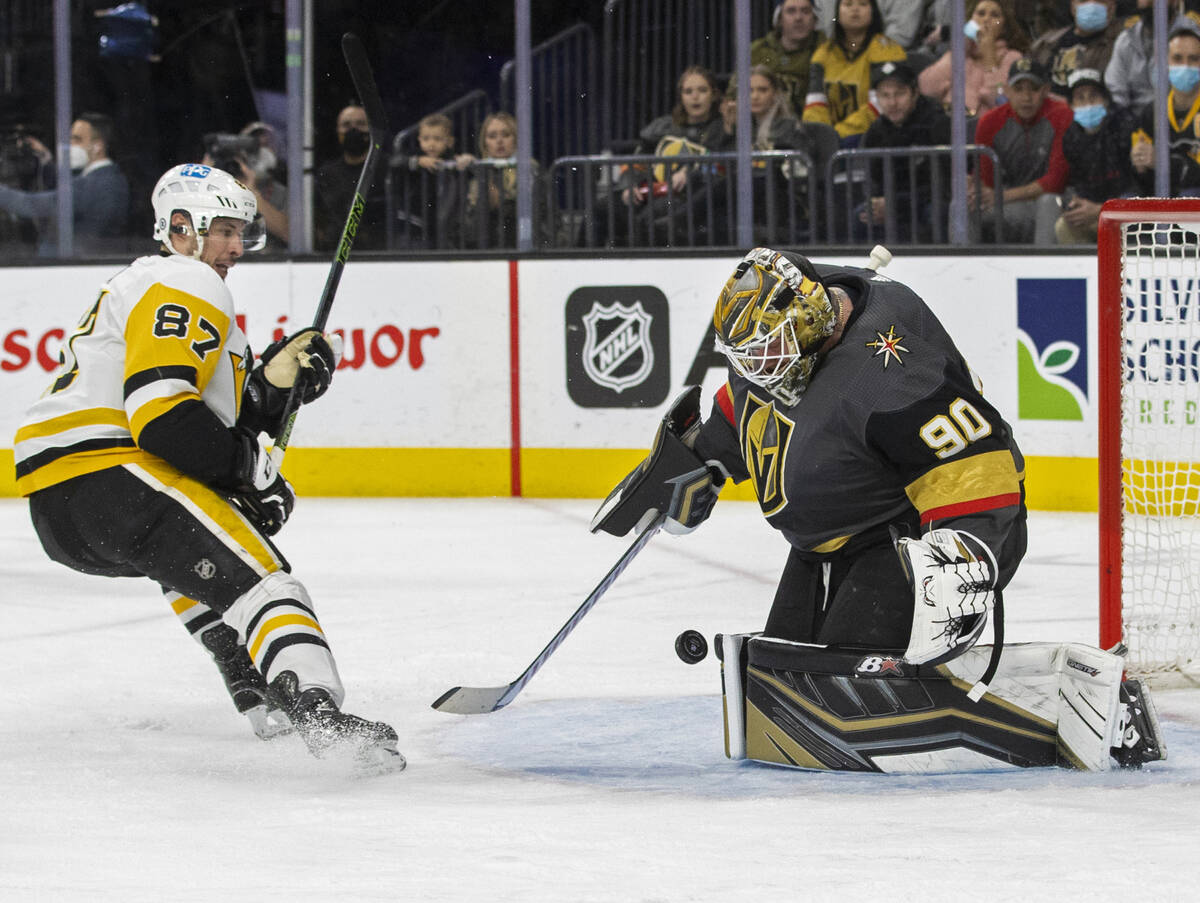 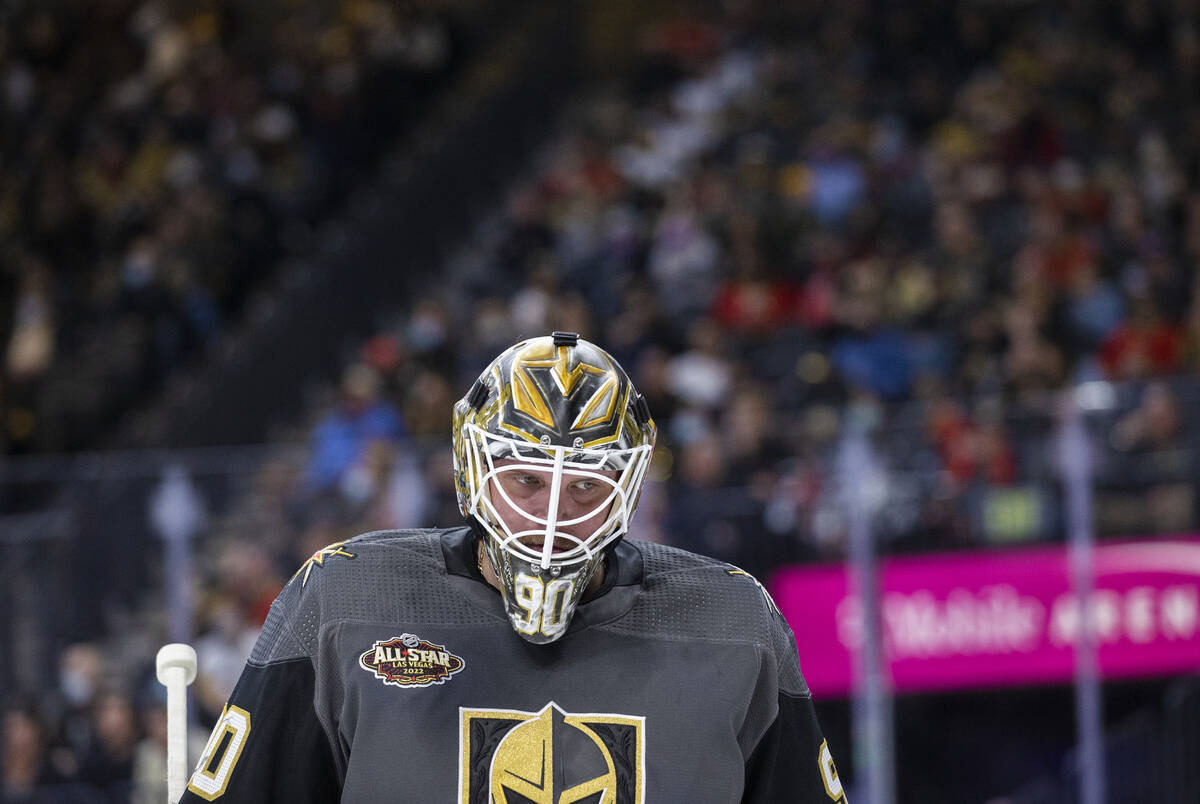 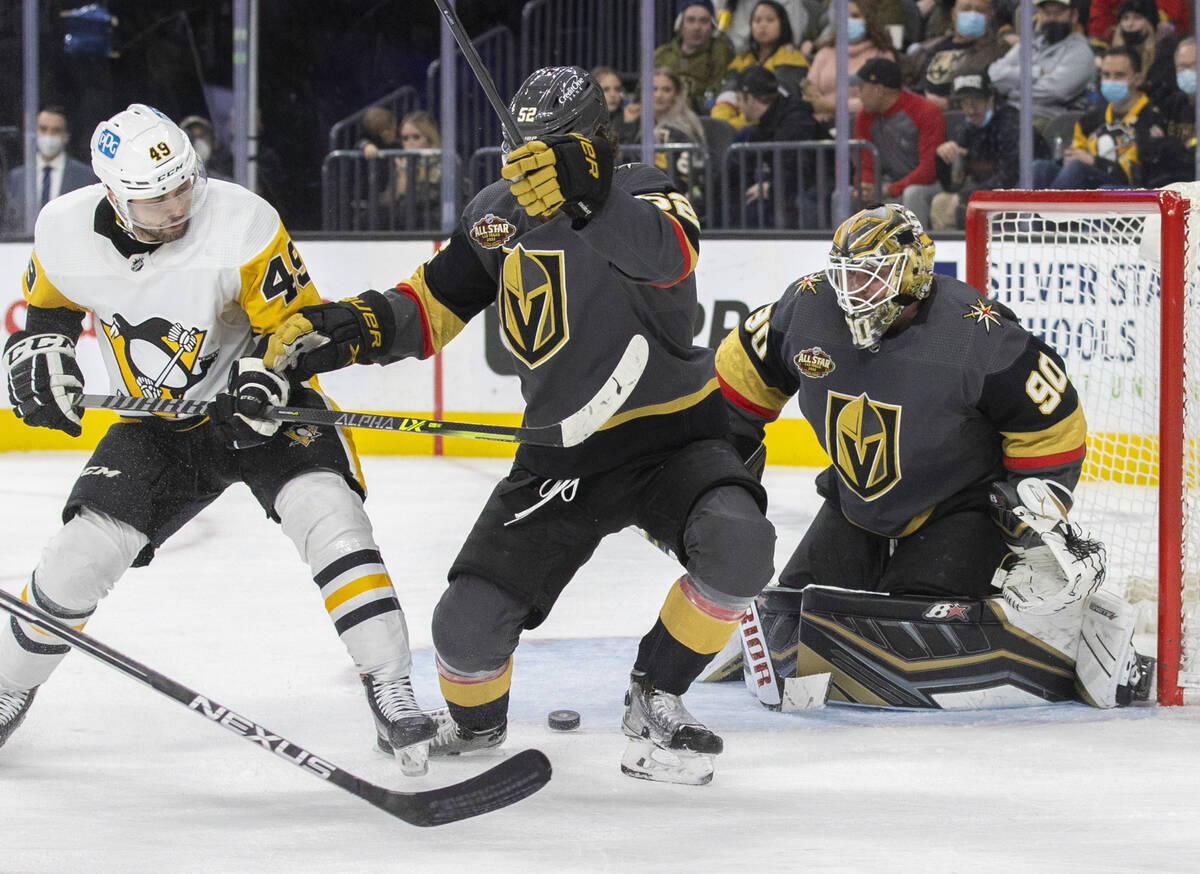 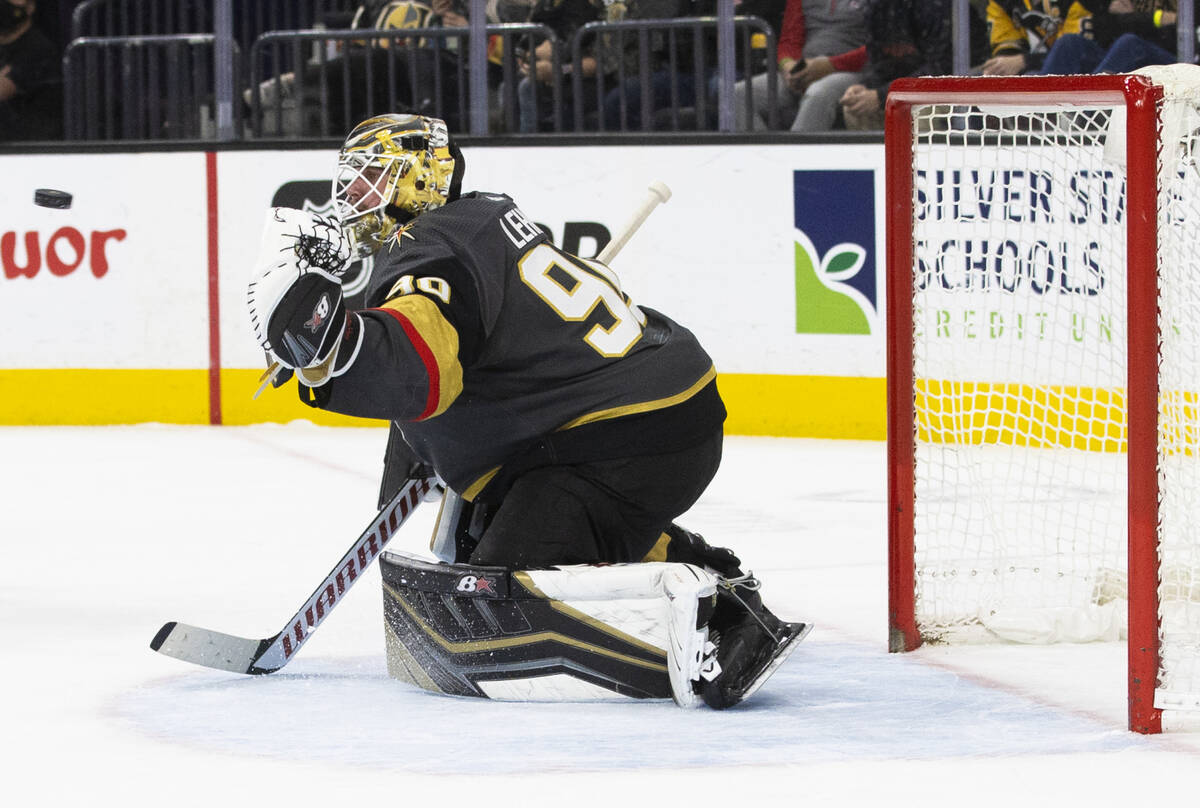 Golden Knights goaltender Robin Lehner (90) makes a save in the second period during an NHL hockey game against the Pittsburgh Penguins on Monday, Jan. 17, 2022, at T-Mobile Arena, in Las Vegas. (Benjamin Hager/Las Vegas Review-Journal) @benjaminhphoto 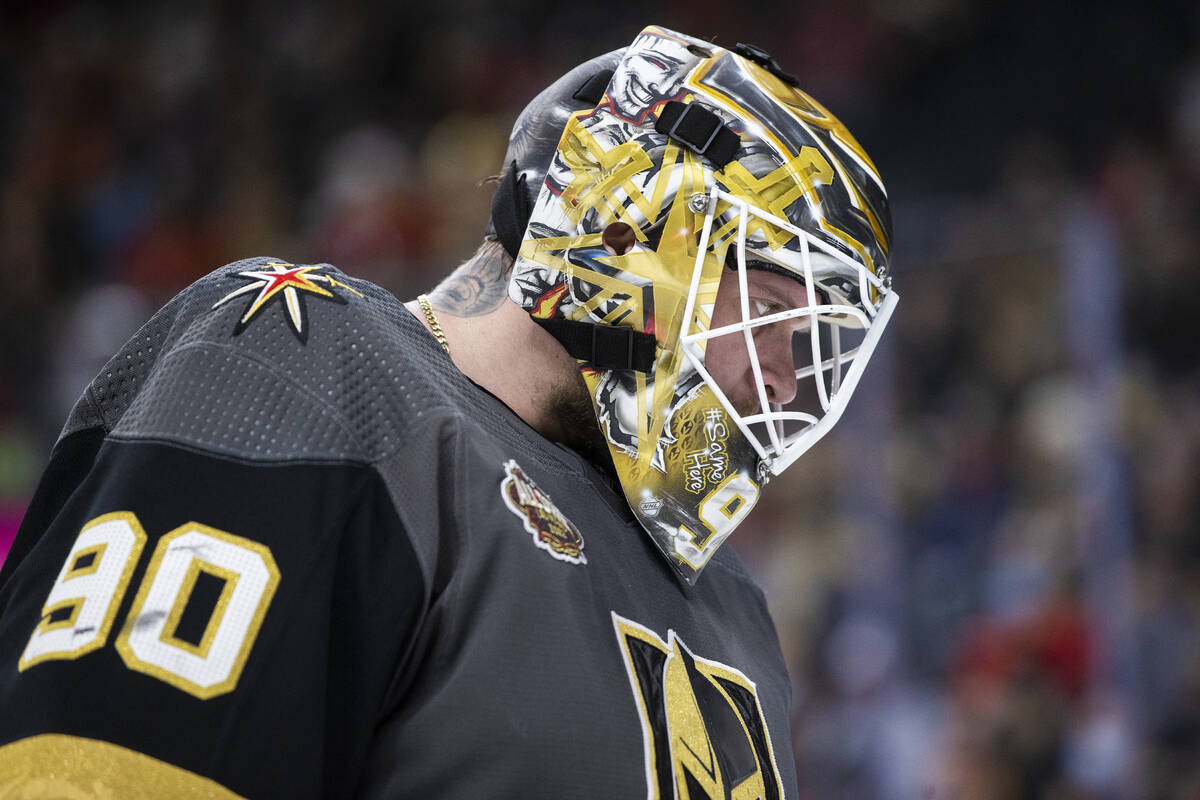 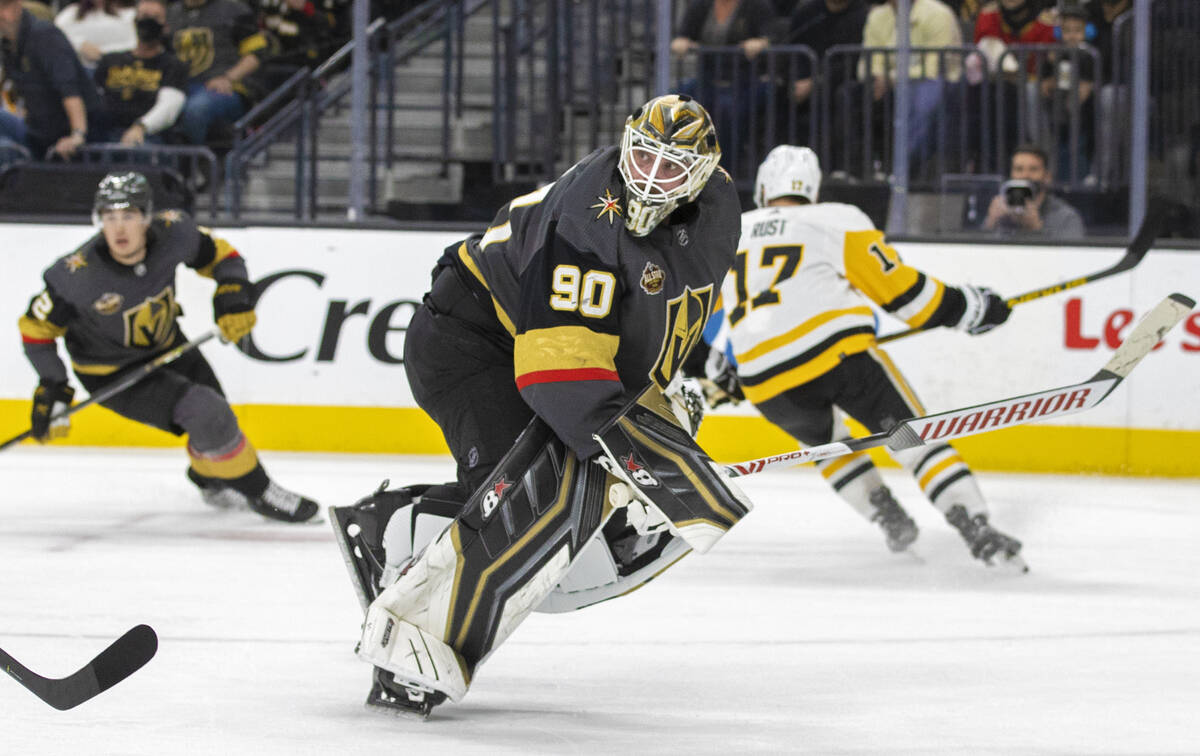 Golden Knights goaltender Robin Lehner (90) sprints back to net after clearing the puck in the second period during an NHL hockey game against the Pittsburgh Penguins on Monday, Jan. 17, 2022, at T-Mobile Arena, in Las Vegas. (Benjamin Hager/Las Vegas Review-Journal) @benjaminhphoto 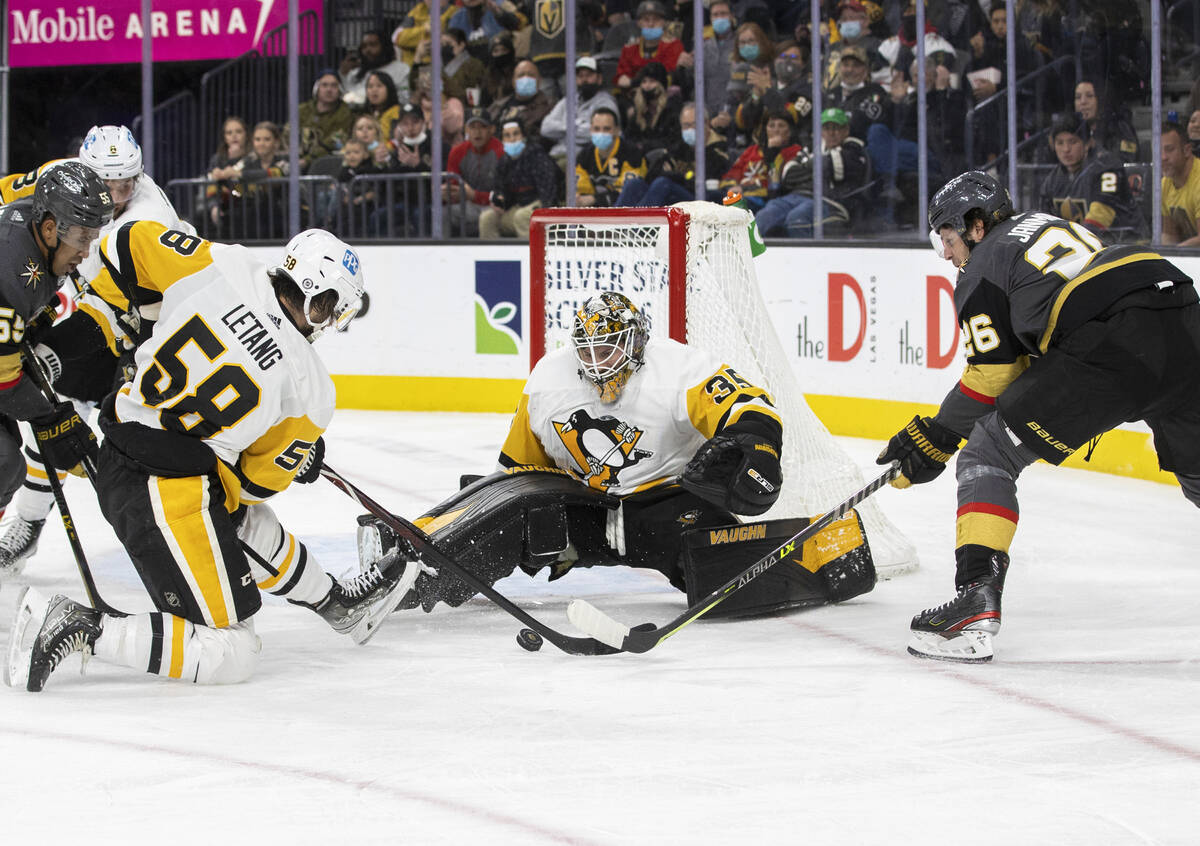 The Golden Knights were worried about how they would start Monday against the Penguins in their first game in six days.

The beginning wasn’t the problem for the slumping Knights, who jumped out to a three-goal advantage. It was their inability to sustain that level of play over the final 40 minutes that proved costly.

Wobbled by a haymaker from Pittsburgh in the second period, the Knights buckled in the third and lost 5-3 to the red-hot Penguins in front of an announced crowd of 18,213 at T-Mobile Arena.

“You never want to get waxed in your own building like that,” Knights captain Mark Stone said. “Three-nothing after the first period, you can’t walk away from the game with nothing. We have another two days off between here. A little soul-searching to do.”

Former Las Vegas resident Jason Zucker scored twice for Pittsburgh, and Jake Guentzel notched the winner on a wraparound at 2:12 of the third period to send the Knights to their fifth loss in the past six games (1-3-2).

Sidney Crosby added an empty-net goal for the Penguins, who rallied with five unanswered goals after the Knights led 3-0 at the end of the first period.

The Penguins improved to 13-2 since Dec. 4, the second-best record in the NHL during that time behind Colorado.

“They came out real hard in the second, and we took some penalties,” goalie Robin Lehner said. “They created some momentum. That first goal kind of just set us off a bit, and we didn’t really recover.”

The Knights scored on their first shot against Penguins goalie Tristan Jarry, as Chandler Stephenson used his speed to open the scoring 3:43 into the first period with his first goal since Dec. 28.

They found their legs midway through the first period during a spell of special teams, and Evgenii Dadonov put the Knights ahead 2-0 when he deflected in Stone’s shot from the point at 12:12 of the first. Nicolas Roy added a power-play goal with 29.5 seconds remaining in the period.

But Zucker and Teddy Blueger scored 49 seconds apart in the second period to start the Penguins’ comeback.

“Every team in the league is going to blow a 3-0 lead at some point during the season. The key is, what do you learn from it?” coach Pete DeBoer said. “That’s a very good team over there. Very resilient team with a lot of veteran, great players. It comes down to little details at key moments in the game, and they were better than us at some of those.”

Zucker turned 30 on Sunday, and the Penguins winger gave himself a gift against his hometown team.

After getting stopped by Lehner’s glove in the opening minute of the first period, Zucker stuffed in a loose puck during a goalmouth scramble for a power-play goal that cut the Knights’ lead to 3-1 at 6:56 of the second.

Lehner said he thought it was goaltender interference, but DeBoer didn’t think there was conclusive evidence when he looked at the replay and was hesitant to challenge after the Knights took two penalties in the first 5:02 of the second period.

“We couldn’t get a flow in the second period and fortunately fought the rest of the night, just lost all momentum,” Stone said. “We didn’t have any pushback at all. They just ran over us.”

Zucker added the tying goal 28 seconds into the third period when he deflected Kasperi Kapanen’s drive after an offensive zone faceoff win.

It’s been a tough season for Zucker, who missed the previous seven games with a lower-body injury. He has six goals in 31 appearances and continues to create chances but hasn’t been able to finish. Zucker entered Monday with a 4.9 shooting percentage, well below his career mark of 12.2 percent.

The Knights were able to ice a strong lineup for the first time in a while, as defenseman Shea Theodore and forwards Nolan Patrick and Roy played after being cleared from NHL COVID-19 protocol over the weekend.

The Knights remain without defensemen Alec Martinez (upper body/COVID protocol) and Nic Hague (wrist) and could have used their physical presence against the Penguins.

“We’re still a little soft around our own net, too,” DeBoer said. “Hague and Martinez are both defenders, and not to make excuses, because everyone is dealing with guys out of the lineup, but those are two guys that are tough to play around your own net. We miss those guys.”

Defenseman Brayden McNabb did his best to slow the Penguins’ forwards.

McNabb had nine of the Knights’ 19 hits through the second period and finished with 10 hits in 22:11 of ice time.

The Knights were outhit by Pittsburgh 32-26 overall. 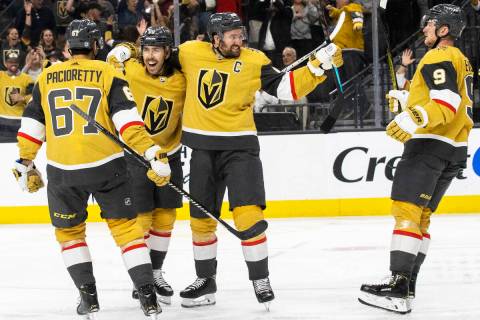 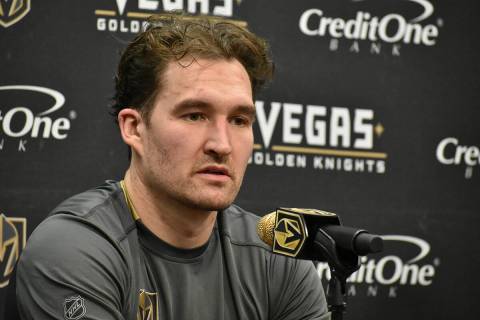 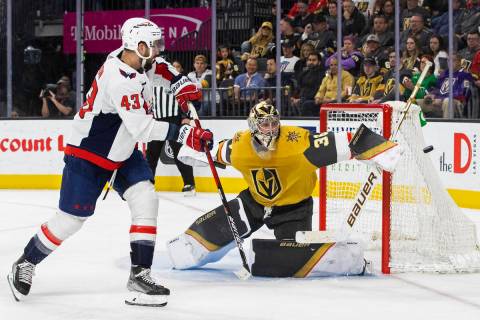 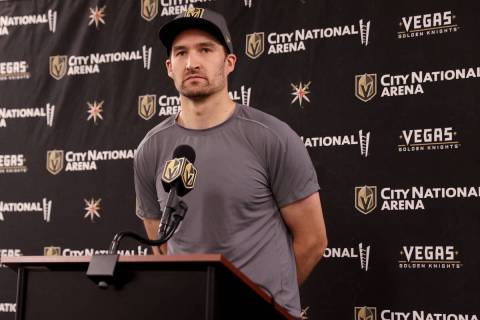 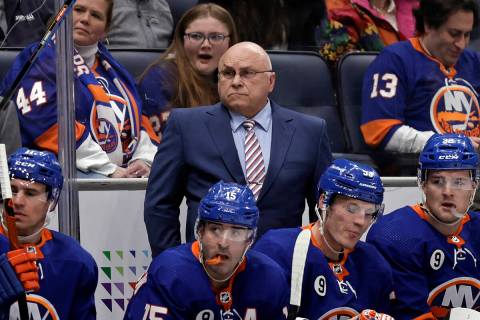 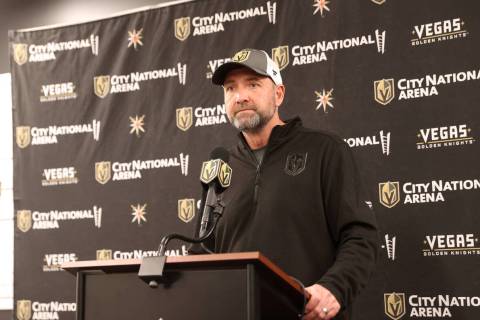 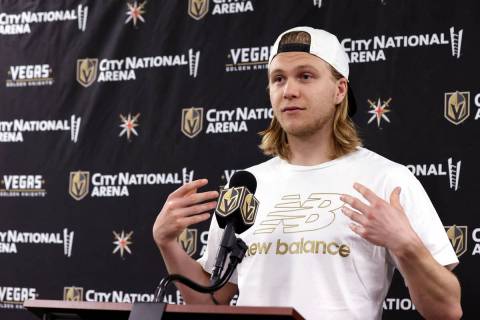