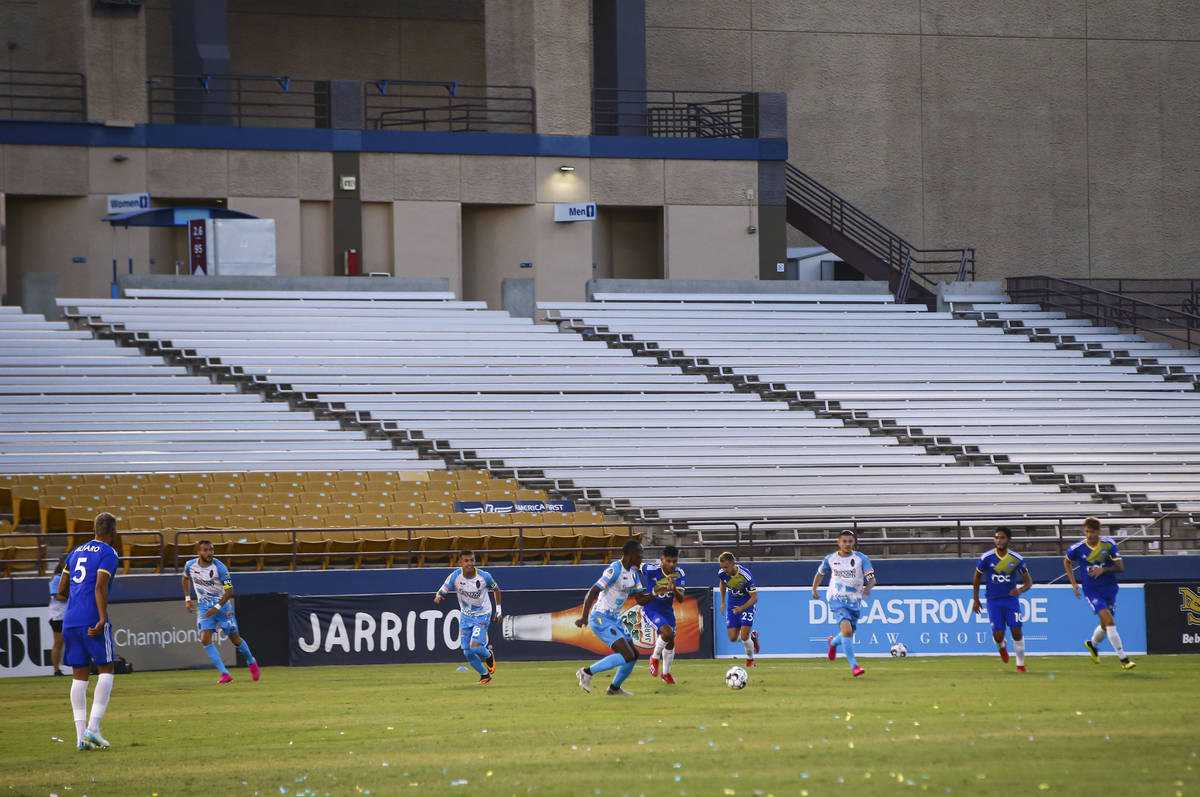 Las Vegas Lights FC play Reno 1868 FC with a backdrop of empty seats and no fans during the first half of a USL soccer game at Cashman Field in Las Vegas on Saturday, Aug. 1, 2020. (Chase Stevens/Las Vegas Review-Journal) @csstevensphoto

In 2018, the year the Lights FC was launched, the “Lights FC Homegrown Player Program” was announced as a guarantee that the team will always feature a player with ties to Las Vegas on its roster.

On Wednesday, forward Blake Frischknecht became the eighth player to sign with the club as a part of the initiative.

“It’s honestly a dream,” Frischknecht said. “If you would’ve told me as a kid growing up in Vegas that I’d be able to play professional soccer here, I’d be thrilled.”

Frischknecht joins goalkeepers Thomas Olsen (Bishop Gorman) and Angel Alvarez (Rancho) as the current group of hometown players. The Centennial product split his collegiate career between Brigham Young andd\ Utah Valley before an ACL injury cut his senior season short. The Lights brought him in earlier this year to assist him with his rehabilitation and sign him to the team.

“I’m real excited for him. He’s got great energy,” Lights FC interim head coach Frank Yallop said of Frischknecht. “He’s a local kid that I think is going to do well for us this year.”

With games at Cashman Field remaining empty due to the ongoing COVID-19 pandemic, Frischknecht is left unable to experience the sensation of playing for his home team with a crowd of his friends and family behind him. The 24-year-old forward was once in opposition of a passionate Cashman crowd. He scored the game-winning goal as a member of the Orange County FC amateur team to upset the Lights during the 2019 Lamar Hunt U.S. Open Cup.

Frischknecht is undeterred by the current circumstances and is glad to be playing in Vegas.

“Just to get that opportunity to play at Cashman in general, even if there are no fans, it’s something to be proud of,” Frischknecht said. “I’m excited. Hopefully we can do the city proud.”

Olsen, who has been with the Lights since 2018, shared Frischknecht’s excitement about playing professional soccer in Las Vegas. “I definitely don’t take it for granted,” Olsen said.

Olsen described the atmosphere at Cashman Field as one of the best in the United Soccer League, saying the fans definitely provide a home field advantage for the Lights and playing without fans in attendance has been an adjustment.

“It’s definitely not the same at all. It feels like a practice game,” Olsen said. “It’s one of things everyone is adapting to at this point. We just have to go along with it and figure it out the rest of the season.”

With USL games available to watch on ESPN+ and the remainder of the Lights’ home games on Cox YurView Las Vegas, Olsen is thankful games are more accessible to fans than in years past. Though his friends and family cannot support in person, they are able to support the team from home.

This season Olsen and Alvarez have not seen any game action. the Lights starting Edward “Lalo” Delgado has been in goal all season. Coach Yallop notes there will be opportunities for Olsen to get back on the pitch as the season progresses.

“(Olsen) has been here a while and brings experience,” Yallop said. “He’s ready to go anytime. Hh trains well, I’m excited about seeing him play this season.”

The 0-2-1 Lights are scheduled to play Orange County SC Saturday at Championship Stadium in Irvine, California, taking the pitch for the first time since last Saturday when a member of the Light’s organization tested positive for the coronavirus, postponing games against the San Diego Loyal SC and the Tacoma Defiance. Yallop said the overall uncertainty of the season can be frustrating.

For Olsen, having matches abruptly called off is another obstacle the team will have to overcome.

“It’s uncharted territory for everybody, having two games in a row canceled. You’re not really sure how the testing is going,” Olsen said. “The fact that we can still play I think is special. We’ll figure out a way to finish the season and move on from here.”