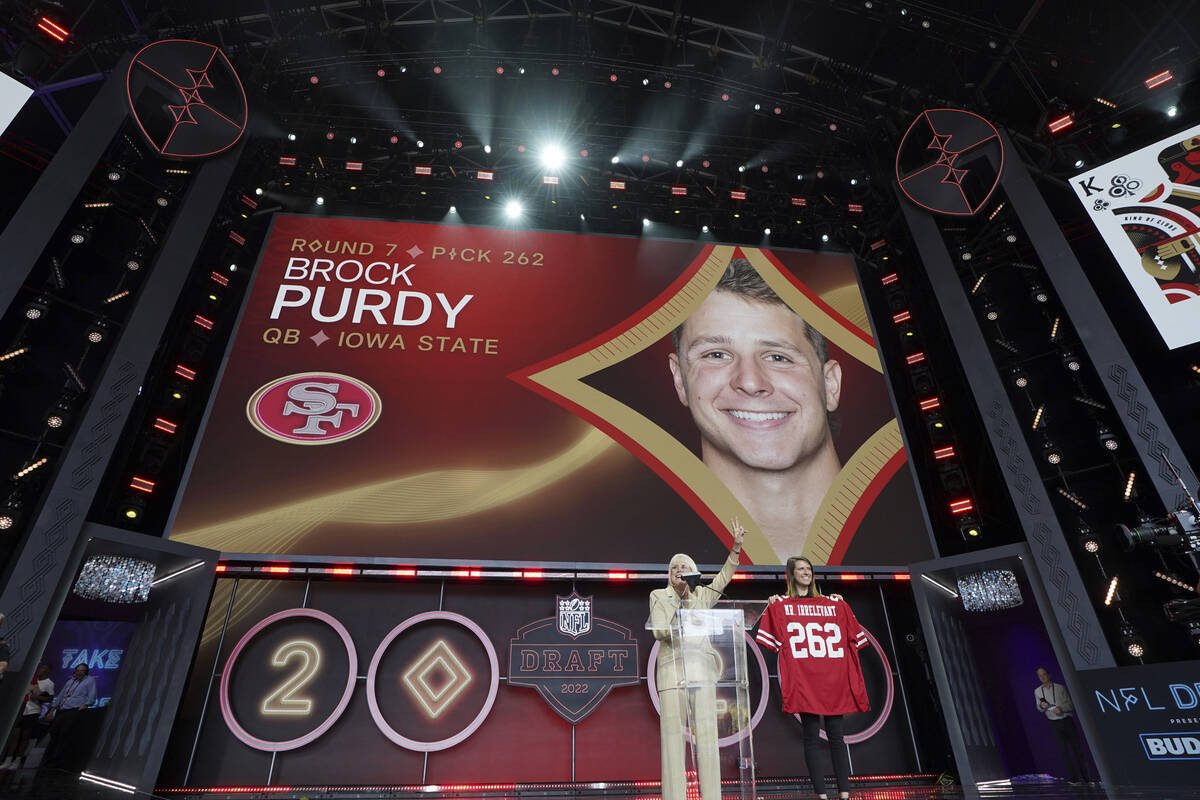 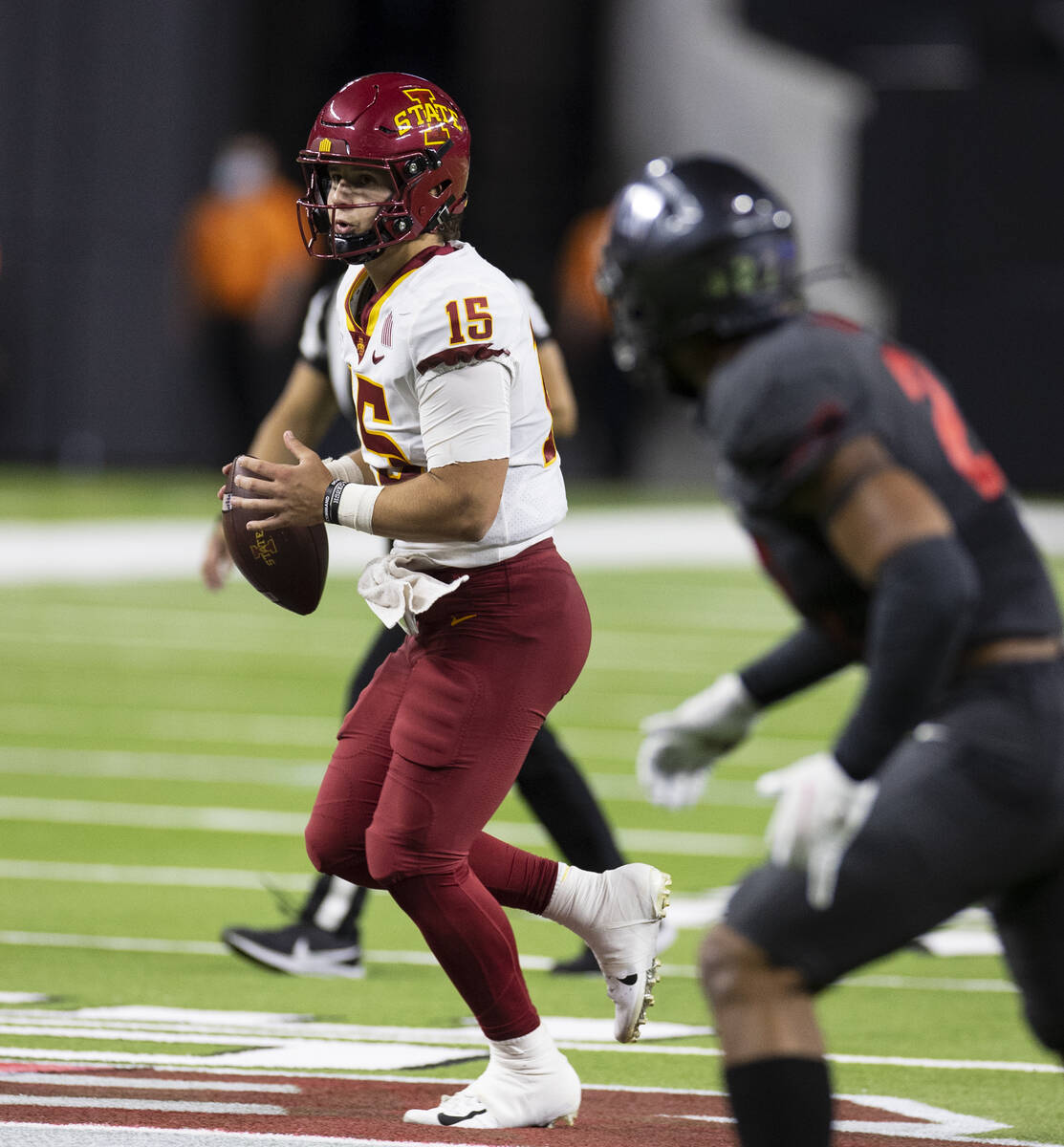 Iowa State Cyclone's quarterback Brock Purdy (15) looks for an opening as he runs with the ball against UNLV Rebels during the second quarter of an NCAA football game at Allegiant Stadium, on Saturday, Sep. 18, 2021, in Las Vegas. (Bizuayehu Tesfaye/Las Vegas Review-Journal) @bizutesfaye 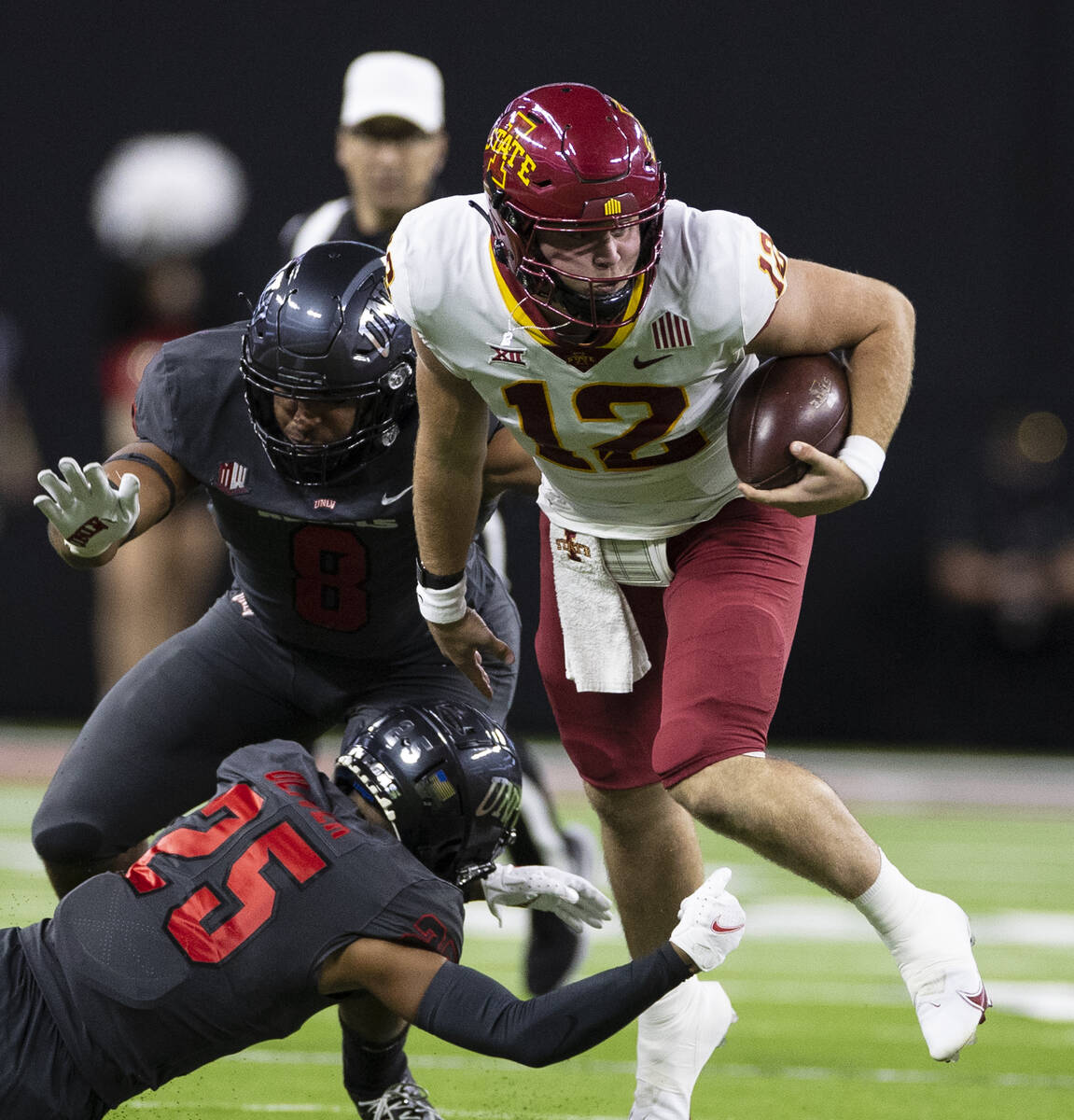 It turns out Iowa State’s 48-3 victory over UNLV in September at Allegiant Stadium wouldn’t be Brock Purdy’s final football memory in Las Vegas after all.

Purdy on Saturday was selected by the San Francisco 49ers with the No. 262 pick in the NFL draft, making him the final selection, and thus, Mr. Irrelevant. Irrelevant Week Inc. CEO Melanie Fitch announced Purdy’s selection on the draft stage outside Caesers Forum, thereby concluding the first NFL draft in Las Vegas history.

Her daughter, Alex, furnished a red 49ers jersey with the “Mr. Irrelevant” stitched in white on the nameplate atop the No. 262 while his name was read.

“Honestly, I feel like not necessarily I had to prove people wrong but to prove myself right,” Purdy, a Queen Creek, Arizona, native told the Arizona Republic last week. “I’ve always played above my shoulders, no matter what the level was, whether it’s high school or college. Now it’s at the professional level. …

”I feel that’s the story of my life. But I’m fine with that. It excites me.”

Mr. Irrelevant is the latest distinction in a career for Purdy that includes three All-Big 12 selections. He prepped at Perry High School in Gilbert, Arizona, and was the state’s Gatorade Player of the Year in 2017 after his senior season. A tepid recruitment intensified and the Cyclones offered him a scholarship a month later.

An injury to incumbent started Kyle Kempt paved the way for Purdy to play in 2018 as a true freshman.

He would go on to own or share 32 school records while steering the Cyclones to a 30-17 record as a starter, including a 24-11 record in Big 12 play. He completed 21 of 24 passes for 288 yards and three touchdowns on Sept. 18 in the win over the Rebels and completed his career with school records of 12,170 yards and 81 touchdowns against 33 interceptions.

Purdy was projected to be selected late Saturday or sign with a team as an undrafted free agent. Scouts were concerned, saying he had slow release and average arm strength. The same scouts list his strengths as experience and intangibles.

Purdy will have to prove worthy of an NFL roster this spring, summer and, potentially in the fall. No Mr. Irrelevant has ever thrown an NFL pass. Perhaps Purdy can become the first.

“I know I have what it takes to play at the next level,” he said. “I feel like I’m just as good as the big-name guys in this class.”