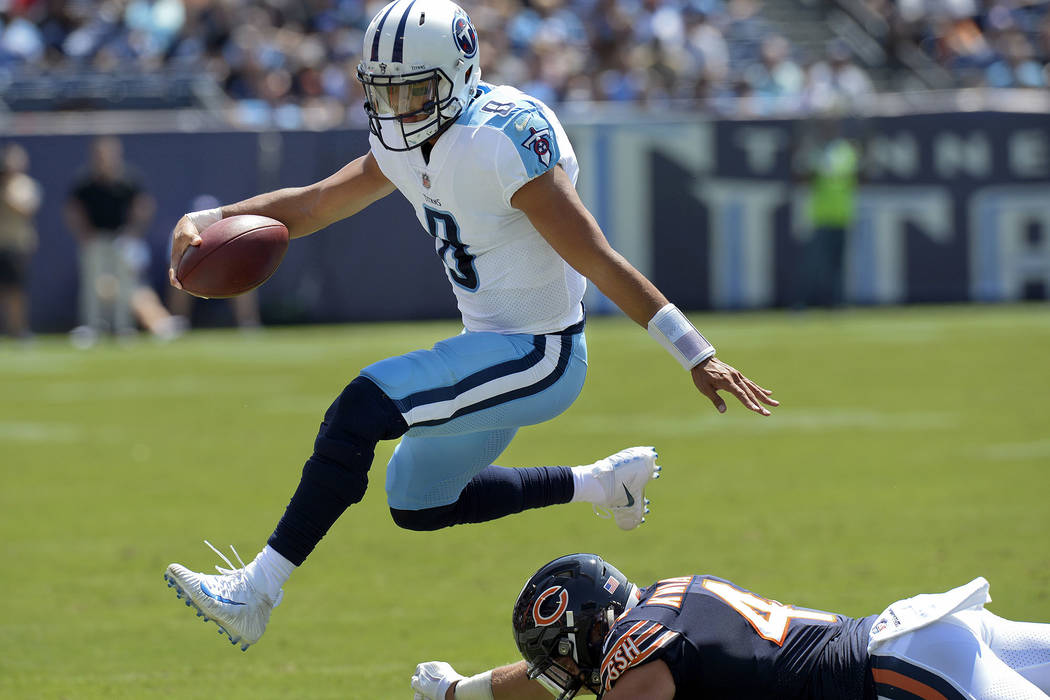 What makes the NFL special is the amount of turnover when it comes to playoff spots on a yearly basis. It’s not uncommon to see a last-place team make a jump the following season to win the division.

In the last three seasons, the NFL has averaged five new teams in the postseason a year after being left out.

This year’s trendy pick for new faces in the playoffs is the Tennessee Titans. And not just advance to the postseason — many pundits have the rising Titans as the AFC South champs for 2017.

Tennessee, which posted a 9-7 record in 2016, improved its roster via the draft and free agency, making Sunday’s Titans-Raiders game one of the better matchups of Week 1.

Here are five things to watch for the Raiders’ first opponent of the 2017 season:

1. Titans quarterback Marcus Mariota’s sizzling two-month stretch from October through November last season had him on the same playing level as Tom Brady, Aaron Rodgers and Matt Ryan. When Mariota is at his best, he’s a matchup nightmare for any defense. He makes the Titans’ passing game go because of his accuracy and deep throws, and ignites the running game with his athleticism and option plays. Mariota is on the cusp of superstardom along with Raiders quarterback Derek Carr.

2. Mariota fizzled in December because of a lack of weapons. The Titans front office solved that problem by adding wide receivers Corey Davis and Eric Decker. Davis, the fifth overall pick in the draft, is drawing comparisons to Dez Bryant but didn’t do much in the preseason because of a hamstring injury. Decker, a veteran who flourished with the Broncos and Jets, could be Mariota’s security blanket and chain-mover. The third-year quarterback now has an abundance of options to go along with Delanie Walker and Rishard Matthews.

3. For as great as Mariota was in 2016, the Titans were a run-first team and will continue to be with the one-two punch of DeMarco Murray and Derrick Henry. Murray, a Las Vegas native, surprised Tennessee with a standout season that consisted of 1,287 yards on the ground after the Eagles were so quick to get rid of the workhorse back from Bishop Gorman High. Murray’s productive season limited the snaps of former Heisman trophy winner Henry, who looked much improved in the preseason. Managing carries between those two beasts isn’t a bad problem to have.

4. The intriguing matchup for Sunday is the battle between the Titans’ tackles and the Raiders’ pass-rushers. Taylor Lewan, a Pro Bowl left tackle, will have his hands full trying to slow down Khalil Mack, the reigning defensive player of the year. On the other side, right tackle Jack Conklin had a standout rookie season in 2016 that ended with a spot on the All-Pro first-team. Conklin will go up against Raiders defensive end Mario Edwards Jr. The Raiders live and die with the pass-rush. If Oakland doesn’t apply pressure on the quarterback it usually turns into long gains against a poor secondary.

5. The Titans are loaded on offense, but Carr could pick apart a mediocre Tennessee defense. The Titans have a formidable front seven led by Derrick Morgan and Brian Orakpo, but not much outside of them. Tennessee addressed its cornerback troubles by signing Logan Ryan from the Patriots and drafted Adoree’ Jackson in the first round out of USC. Jackson struggled in the preseason and is listed as a backup to start the year.

If Aaron Rodgers returns to the Green Bay Packers, the ripple effect might be felt all the way to Las Vegas, where Derek Carr was hoping for a reunion with Davante Adams.

End Yannick Ngakoue is one of several new defensive players for the Raiders who begin training camp Tuesday with their sights set on ending a four-year playoff drought.

The Raiders and Golden Knights faced off at the “Battle for Vegas” charity softball game.

The offense has held its own when compared across the league, ranked eighth in yards and 10th in scoring at 27.1 points per game last season.

The Raiders need their new defensive coordinator to fix a unit that has been an Achilles heel for far too long. Priority No. 1 at training camp is getting the defense squared away.

The Raiders on Friday announced the signings of defensive end Malcolm Koonce and linebacker Divine Deablo, ensuring their full rookie class is under contract for the beginning of training camp.

Sports will overrun Las Vegas when the Golden Knights and Raiders play on the same day twice in the upcoming months and the city hosts two All-Star games during the same weekend.