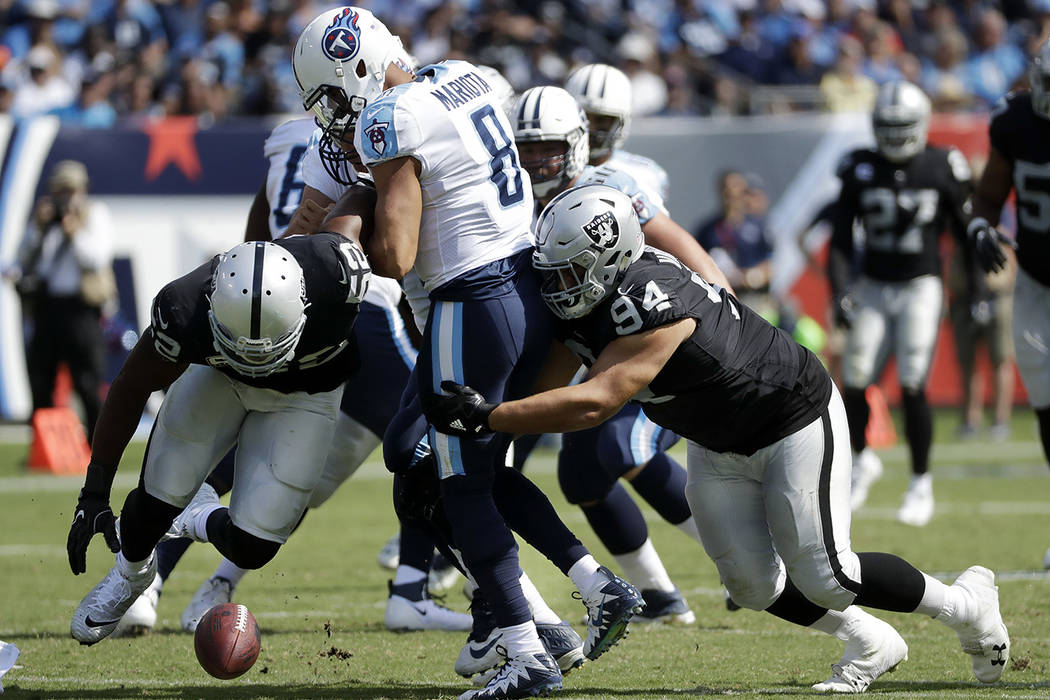 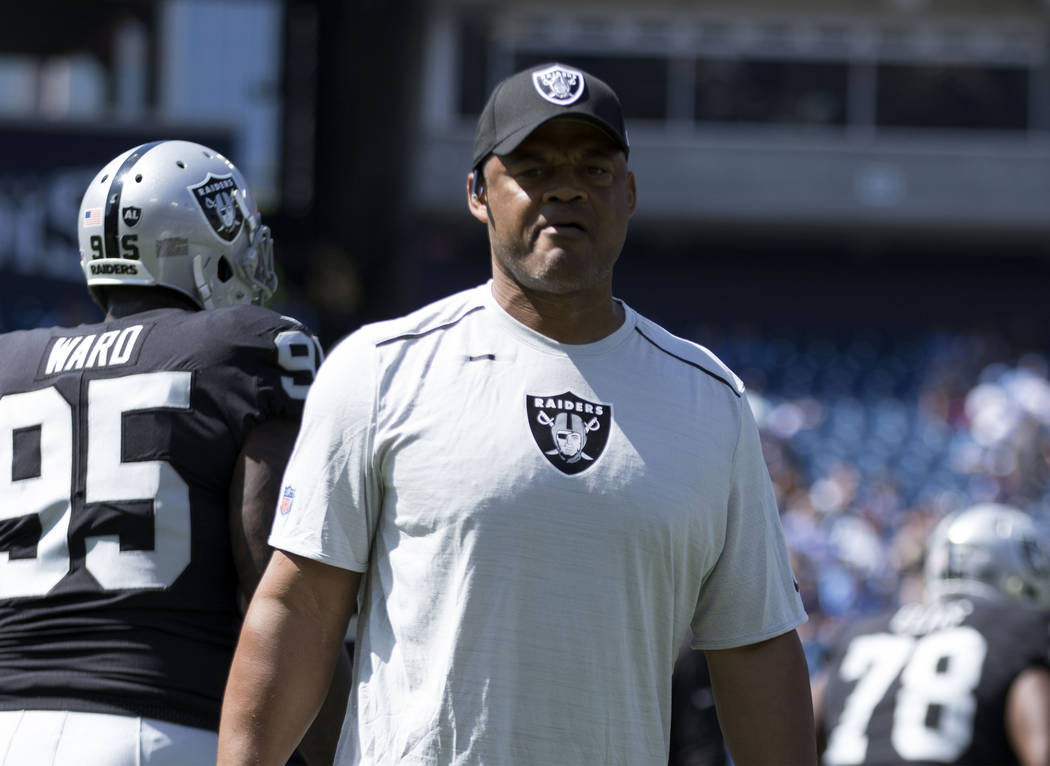 Defensive Coordinator Ken Norton, Jr., prior to the start of the Oakland Raiders game against the Tennessee Titans at the Nissan Stadium in Nashville, Tenn., Sunday, Sept. 10, 2017. Heidi Fang Las Vegas Review-Journal @HeidiFang 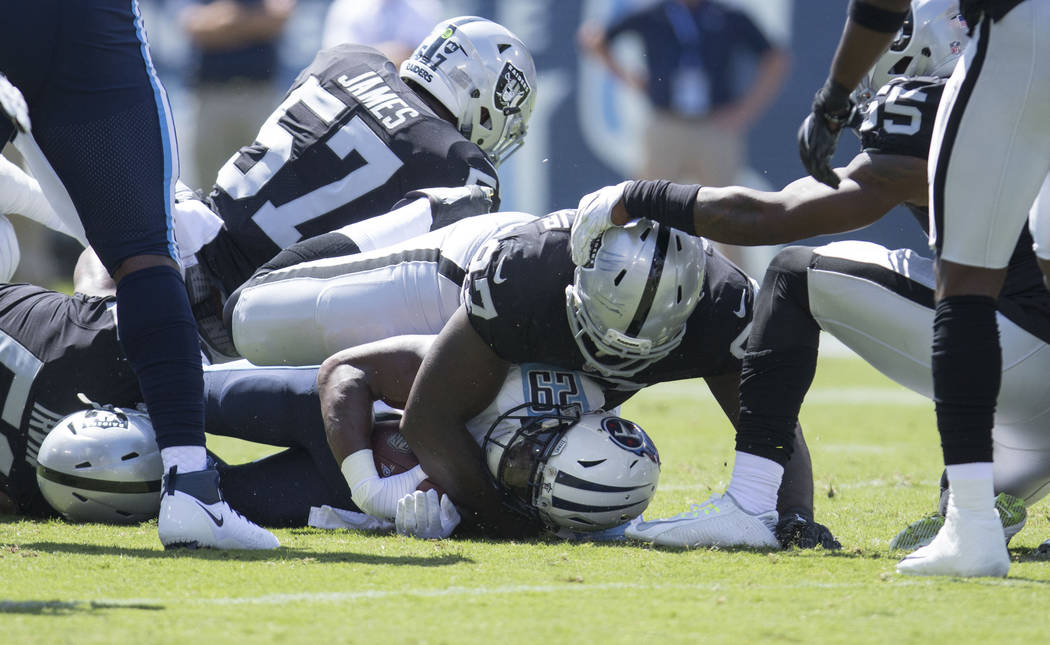 Tennessee Titans running back DeMarco Murray (29) is tackled by Oakland Raiders defensive end Mario Edwards (97) in the first half of their game against the Oakland Raiders at the Nissan Stadium in Nashville, Tenn., Sunday, Sept. 10, 2017. Heidi Fang Las Vegas Review-Journal @HeidiFang

The word “surprised” is what drew it.

The Raiders defensive coordinator is required to hold a weekly press conference. This commitment, a casual observer might ascertain, is not his favorite part of the week. Here, he fields questions from a reporter pool who this offseason acknowledged more negatives than positives about his 2016 defense than he preferred.

Norton is well aware, too, defense isn’t viewed as a strength of the 2017 squad.

Cue to Thursday. Second question. He was asked if it surprised him how well his defenders performed on Sept. 10 against the Tennnesee Titans.

“Did they surprise me?” Norton said. “Oh my goodness. They were no surprise.”

Contrary to pundits, the Raiders appear very confident in their 2017 defense. If Week 1 showed anything, it was they have reason to be, the unit able to thwart a top rushing attack and affect the quarterback despite seldom blitzing. On Sunday, they can build upon the performance against the New York Jets at the Oakland-Alameda County Coliseum.

In this instance, two weeks probably won’t be enough, either.

The Jets may have one of the NFL’s most talent-depleted rosters. In Week 1, against the Bills, New York managed 38 yards on 15 carries. Quarterback Josh McCown, who scored on a 1-yard scramble, threw for 187 yards with two interceptions. The unit went 4-for-14 on third down and totaled 11 first downs.

Shutting down this offense won’t shut off the outside noise.

But to the Raiders, that’s the beauty of it. They are aware of the talk. They just aren’t listening, they say.

“That’s what ya’ll want to talk about,” linebacker Bruce Irvin said. “We believe in us.”

“As long as we believe in each other and have each other’s back, that’s the only thing that matters in this locker room,” said Nelson, a team captain. “It’s us, the people who are wearing that Raider symbol, the people who know what we’ve been through in OTAs and training camp, who know how hard we’ve been putting in the work and studying. Even for our coaches, the time they’ve put in putting in the game plan.

“As long as everyone in the locker room keeps that attitude, I think we’re going to be all right. … Ignore the noise. Keep your head down, and control what you can control. Do your job. Don’t worry about anything else. We can’t worry about what the outside is talking about. I couldn’t care less.”

It is easy, on paper, to be lukewarm about the unit.

After all, they allowed 6.1 yards per play in 2016, most in the league. They did not sign a veteran free agent of consequence all offseason.

The team puts stock in its developmental time on the practice field. It puts stock in a rookie class that saw defensive end Eddie Vanderdoes, a third-round pick, make an immediate impact. Cornerback Gareon Conley, a first-round choice, will debut against the Jets. Improved communication in the secondary was a priority. Coaches and players alike report strides in that area.

Oh, and there’s defensive end Khalil Mack, the AP Defensive Player of the Year. That helps.

“We just have to keep believing,” Cowser said. “We can be great. We just need to put that side forward. We know we have it in us. You saw it in Tenneseee. We’re stopping the run; we’re giving ourselves a chance on third down to get after the ball, to make some big plays.

“Top to bottom, it’s a very talented room. I know we can do it. We just have to do it. I think that’s something this year that Coach Norton was talking about.‘Hey, let’s show them who we really are. Let’s show the world what the Raiders’ defense is about.’ You can feel it. It’s not just rah-rah. It’s legit. We see it. We feel it.”

Some will be surprised if the Raiders’ defense carries its weight in 2017.