Vegas Nation's Cassie Soto and Vinny Bonsignore bring the latest from Raiders training camp as the team prepares to host the Minnesota Vikings for a preseason week one matchup on Sunday. 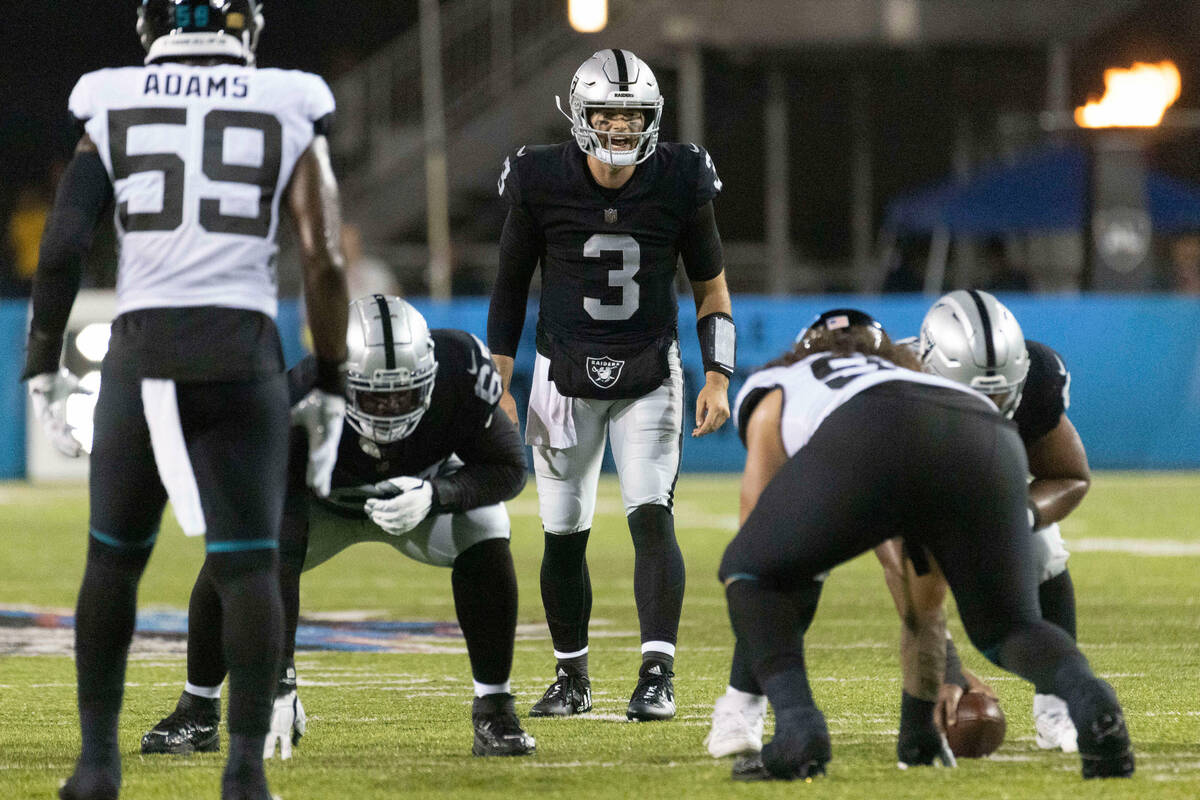 Raiders quarterback Jarrett Stidham (3) calls for the snap during the first half of the NFL Hall of Fame game against the Jacksonville Jaguars at Tom Benson Hall of Fame Stadium on Thursday, Aug. 4, 2022, in Canton, Ohio. (Heidi Fang/Las Vegas Review-Journal) @HeidiFang 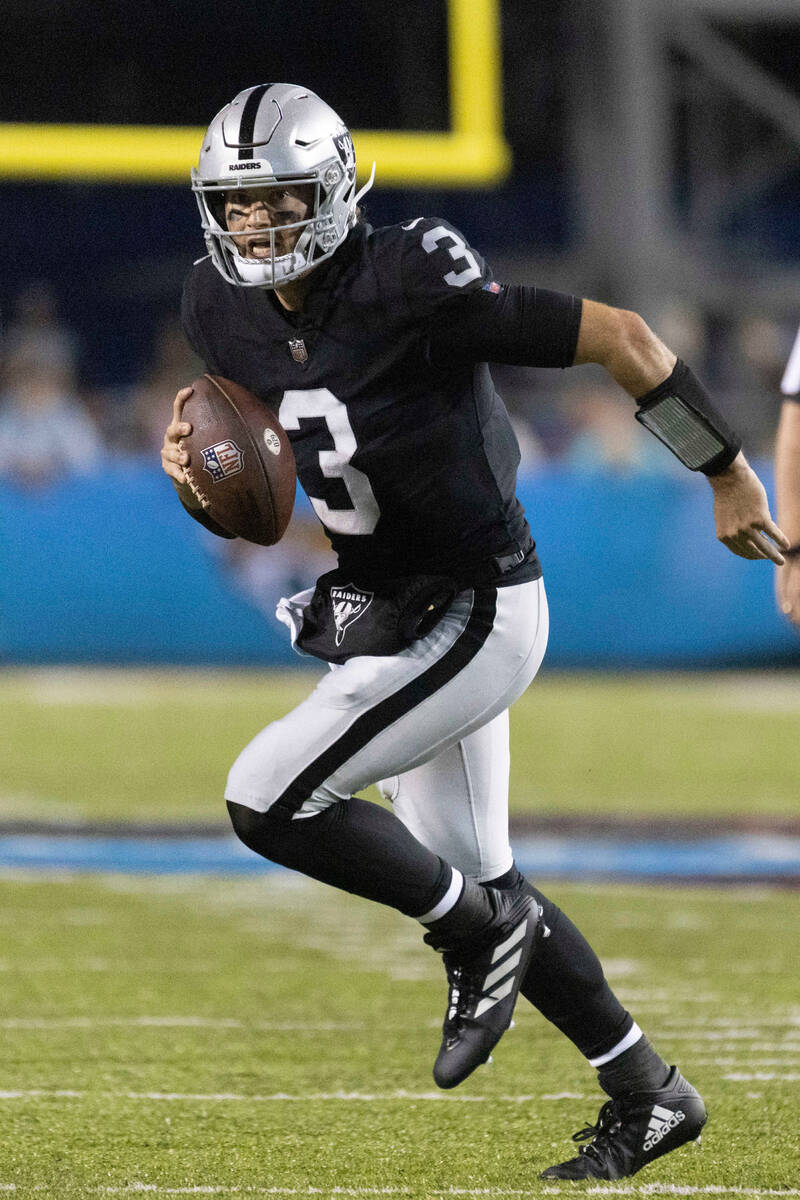 Raiders quarterback Jarrett Stidham (3) rushes with the football during the first half of the NFL Hall of Fame game against the Jacksonville Jaguars at Tom Benson Hall of Fame Stadium on Thursday, Aug. 4, 2022, in Canton, Ohio. (Heidi Fang/Las Vegas Review-Journal) @HeidiFang 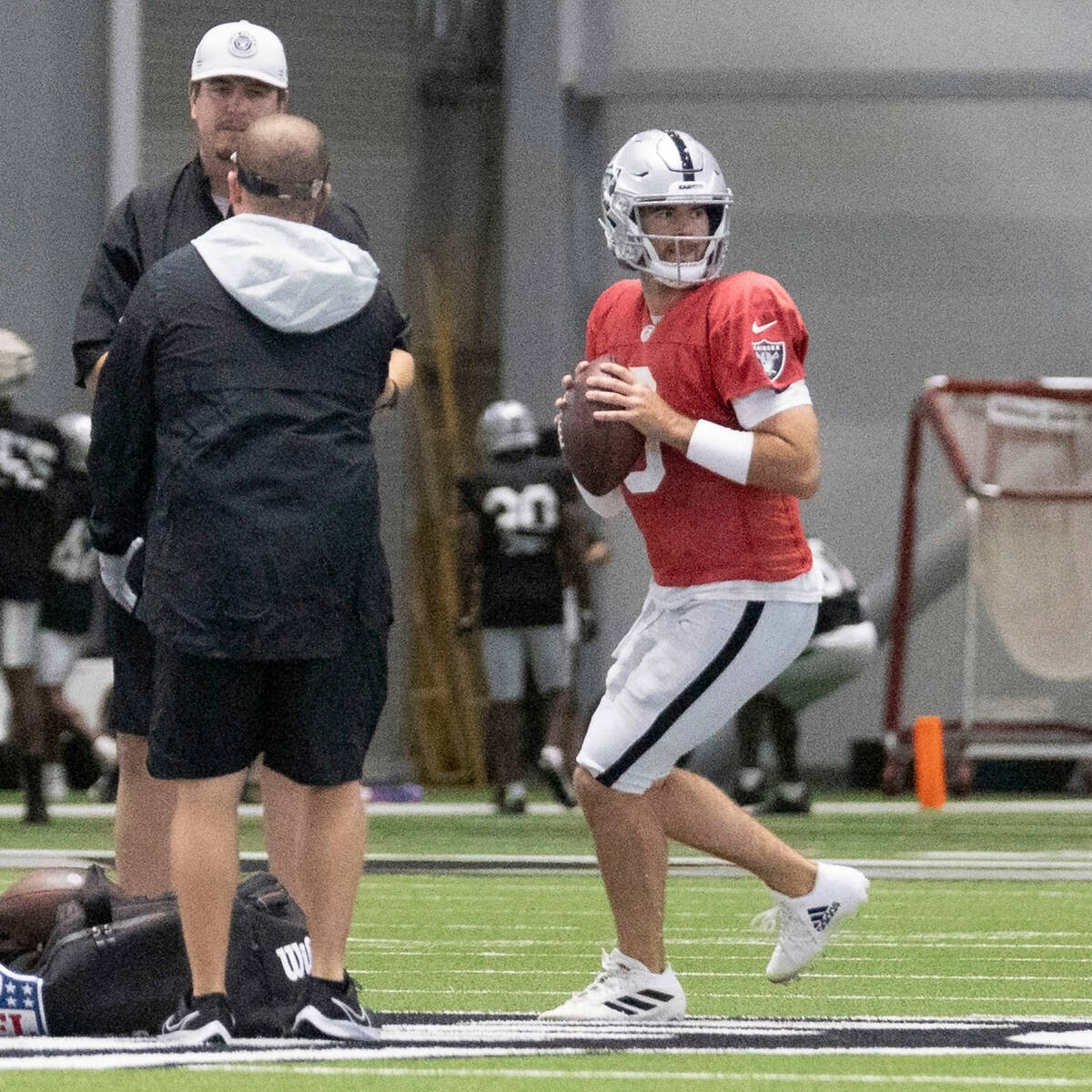 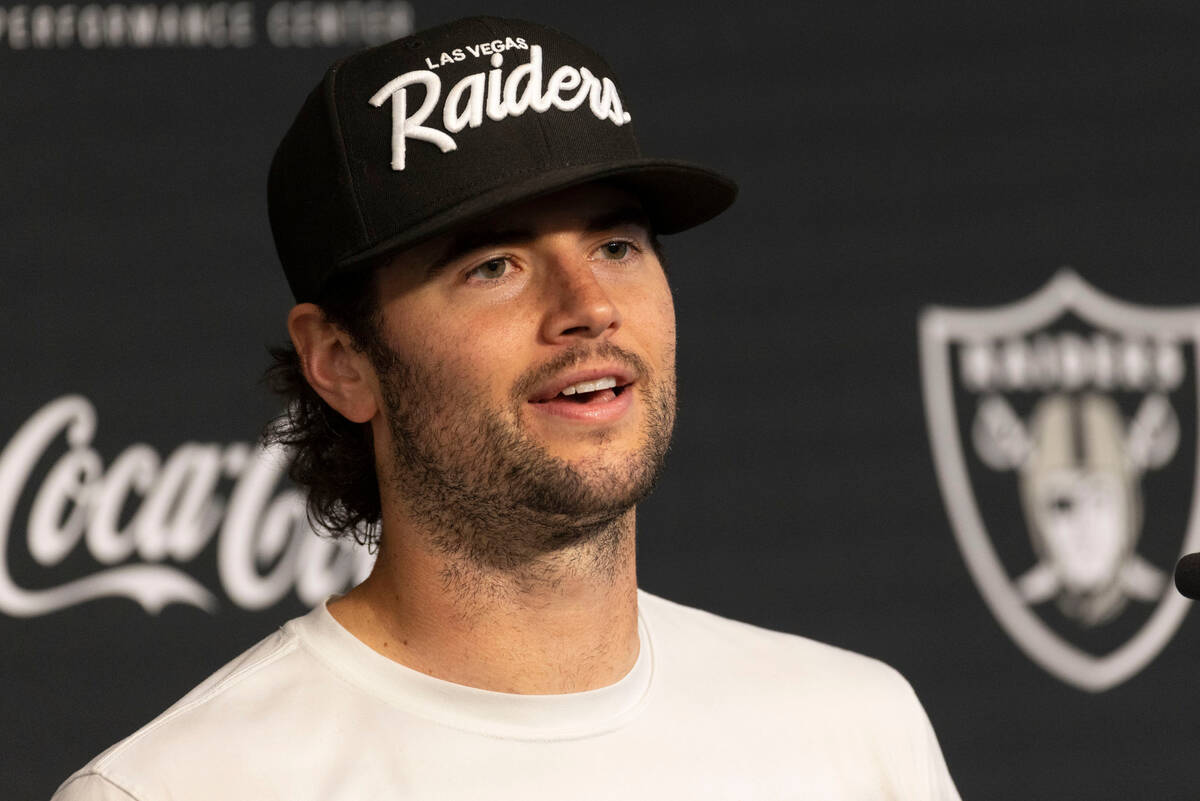 In the aftermath of quarterback Jarrett Stidham’s solid performance in the Raiders’ preseason win over the Jacksonville Jaguars on Thursday, someone made reference to the Hall of Fame game representing his first game action in more than 18 months.

The manner in which Stidham responded confirmed how special the moment was to him and spoke volumes about the frustrating turn of events he endured last summer when back surgery essentially wiped out his 2021 season.

Before the question had been finished or an actual timeline established marking the last time Stidham took a game snap, he smiled and raised his hand to halt the proceedings.

Hence the satisfied smile Stidham wore upon returning to action, especially after doing a postgame body assessment and not detecting any issues.

It has been the same throughout training camp. More than two weeks in, the peace of mind created by a clean bill of health has done wonders for his outlook.

“Just super happy to be healthy,” he said.

Stidham’s play has reflected how good he feels, including the standout manner in which he has performed in camp and the 94 yards he threw for on 8-of-15 passing against the Jaguars.

His numbers would have been even better had Tyron Johnson hung onto a perfectly thrown ball. But between the efficient passing game, a 12-yard touchdown run and the tight grip he had on the offensive operation, Stidham was impressive.

“I thought he got off to a decent start,” coach Josh McDaniels said. “He made some good decisions, threw the ball away a couple times when it wasn’t there, escaped out of the pocket on the one touchdown run. Generally, he operated the offense well.”

The Raiders haven’t named him the backup to starter Derek Carr, but he appears to have the edge over Nick Mullens and Chase Garbers. Not that he’s taking anything for granted.

“My biggest focus right now is just to compete every day with these guys,” Stidham said. “Push all of them as much as I can and help them along the way. That’s all I can control.”

That he’s doing it in Las Vegas is a mild surprise. Four months ago, Stidham was in New England preparing to start his fourth season with the Patriots, who drafted him in the fourth round in 2019 and for whom Stidham played eight games in his first two seasons before missing last season. He was feeling great entering organized team activities and prepared to compete with Mac Jones, Brian Hoyer and rookie Bailey Zappe for a role.

Then Patriots coach Bill Belichick called Stidham into his office one day in May and told him he was being traded.

It was the second part of the news that reflected the solid Belichick was doing Stidham. By sending him to Las Vegas, Belichick was giving the young quarterback a chance to reunite with McDaniels, the offensive coordinator during Stidham’s three years in New England whom the Raiders hired in January.

Stidham was ecstatic about joining a franchise with so many familiar faces, including general manager Dave Ziegler and assistant coaches Mick Lombardi, Carmen Bricillo and Bo Hardegree.

“I was happy to come here and be a part of this organization,” Stidham said.

The only downside was having to leave his wife, who had just given birth to their first child, to report to OTAs. Now, after getting settled, his wife and daughter have joined him in Las Vegas.

It was a whirlwind journey, to say the least.

“Three major life changes all at once,” Stidham said. “But we made the most of it.”

And now he’s making the most out of a new opportunity.