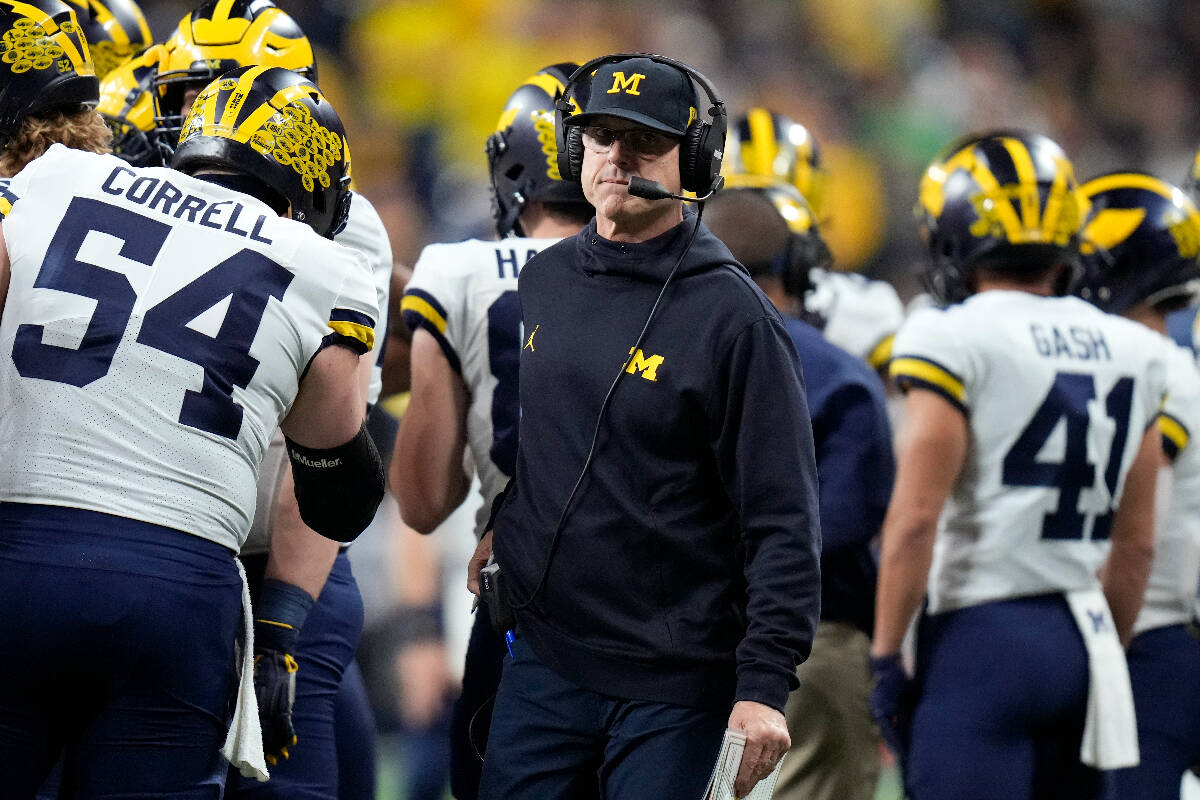 Michigan head coach Jim Harbaugh walks on the sideline during the first half of the Big Ten championship NCAA college football game against Iowa, Saturday, Dec. 4, 2021, in Indianapolis. Harbaugh has been the most scrutinized coach in college football for seven seasons, defined by his failures despite a resume loaded with success. (AP Photo/AJ Mast, File)

There has been plenty of speculation that Michigan coach Jim Harbaugh might wind up taking over the Raiders or another NFL team.

Here is a sampling for what is being said:

I believe he’d be interested. Now, he’s also in negotiations with Michigan, so is his interest in the NFL kind of being like, “Hey, Michigan …” I can’t remember a situation where there’s been so much stuff coming from the Harbaugh side/Michigan side talking about NFL interest. It makes me wonder if it’s on purpose …

I know the Raiders have some interest, but they haven’t engaged at all.

Based on a couple very strong reports and a few well-placed phone calls this week, my current read on the situation is this: Harbaugh might want the Raiders job more than the Raiders actually want him. If the Raiders go in a different direction, would he consider the Bears job? The Bears’ level of interest in him would probably determine the level of interest reciprocated from Harbaugh’s side. My understanding is that the Bears haven’t crossed Harbaugh’s name off the list, but as they juggle a general manager search and other strong head coaching candidates — such as Bills offensive coordinator Brian Daboll (who could be available as soon as Sunday night) — there’s a limit to how long they can wait.

I’m not going to say it’s between Jim and somebody in the organization, which I think may have just been trying to say, “Hi,” may have been trying to read the tea leaves without asking the questions. I don’t know. I can’t confirm that for certain, but it’s a pretty good source. I think that there was a phone call, and I think where that phone call ended is Jim’s got decisions to make and, again, he just hasn’t made them.

What will Jim Harbaugh do this winter with an NFL head-coaching market wide open? Almost no one knows for certain at this point. But it’s worth keeping an eye on the Las Vegas Raiders. Harbaugh, who has a long friendship with owner Mark Davis, started his coaching career with the team in 2003. He also has family ties to Las Vegas, which is where he met his wife.

Multiple sources inside Michigan football told The Athletic this week that they think if Harbaugh is offered the Raiders’ head coaching job, he’d take it.