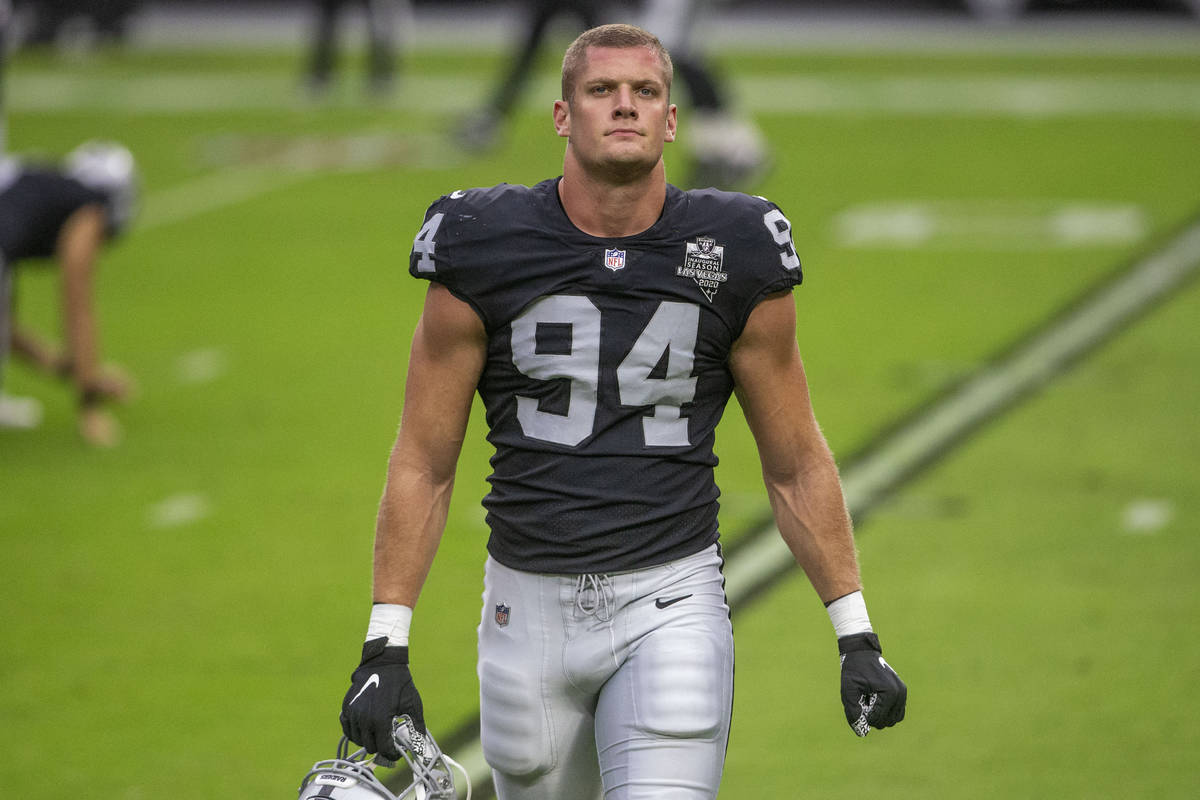 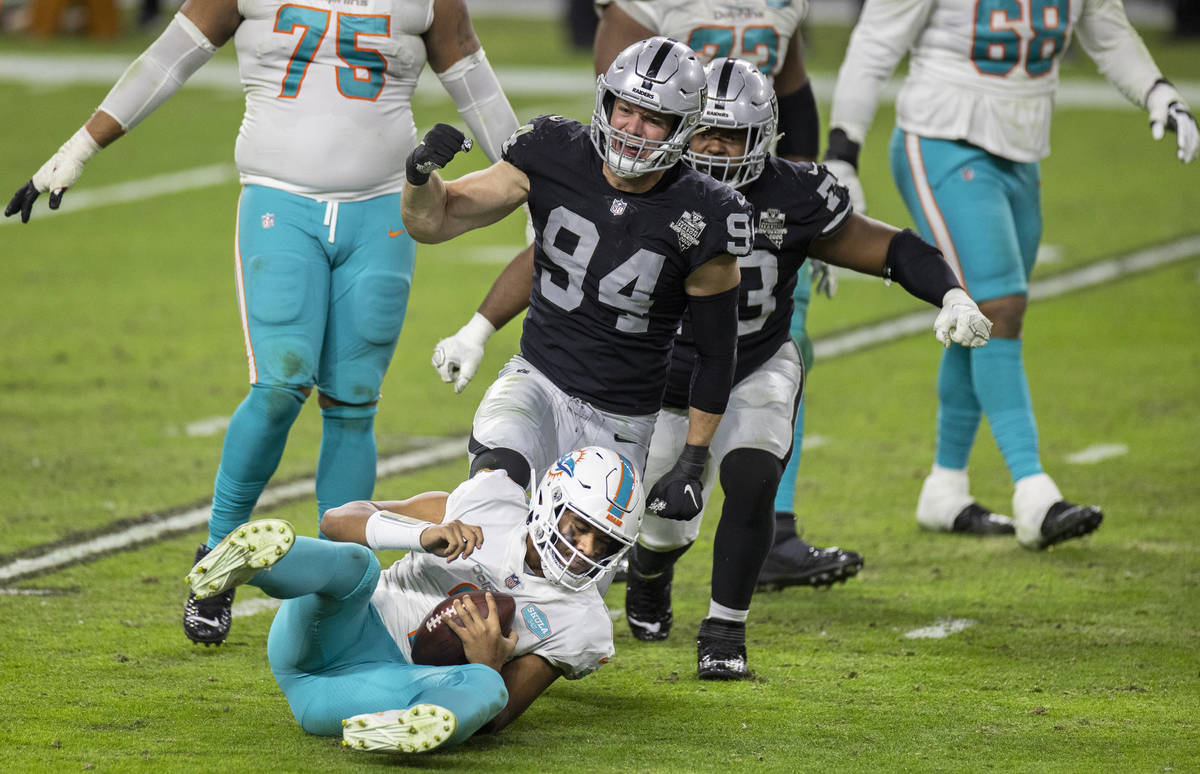 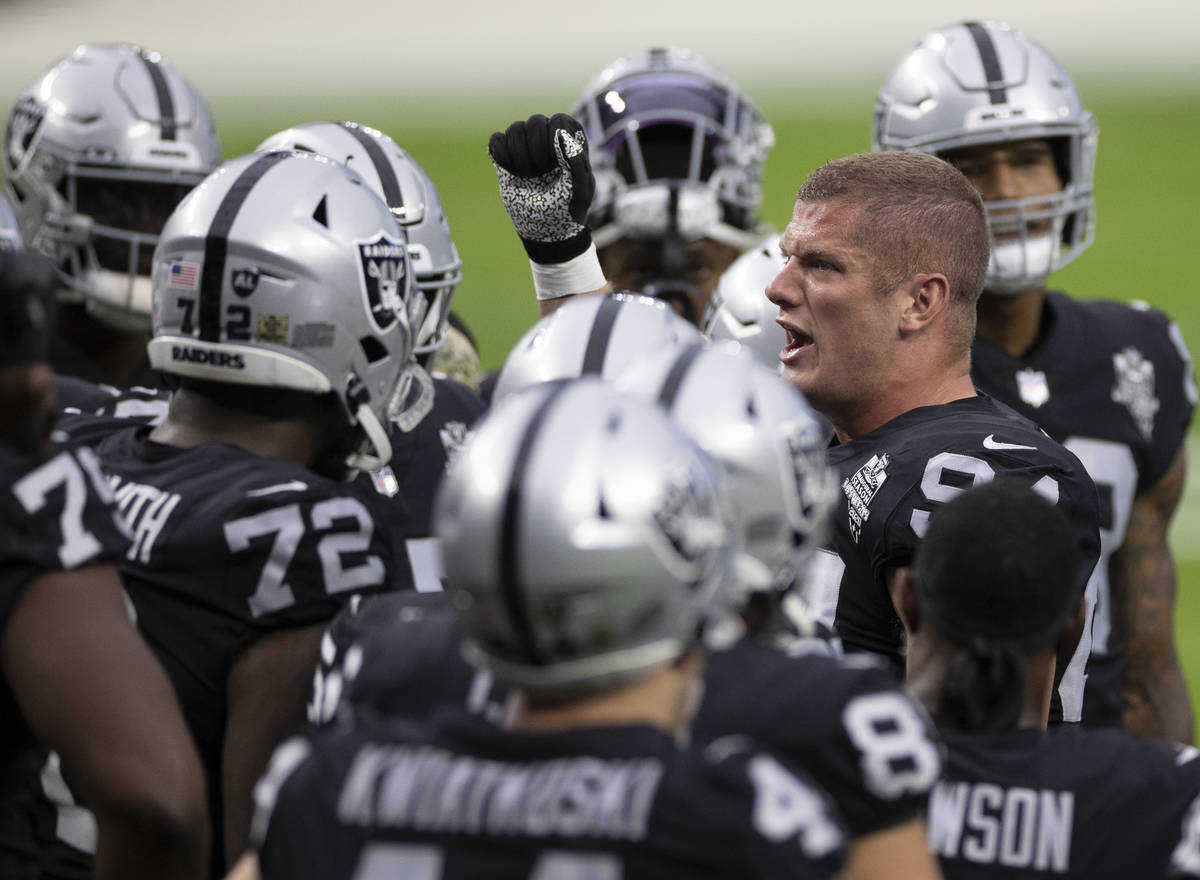 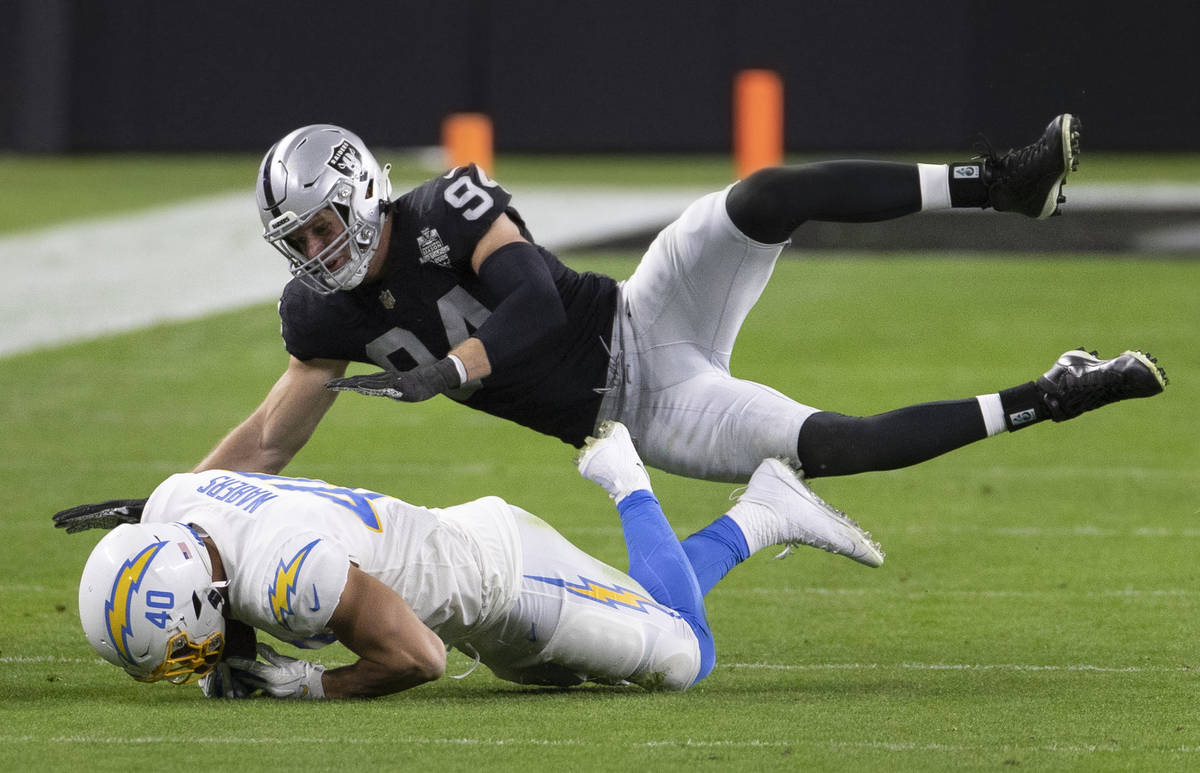 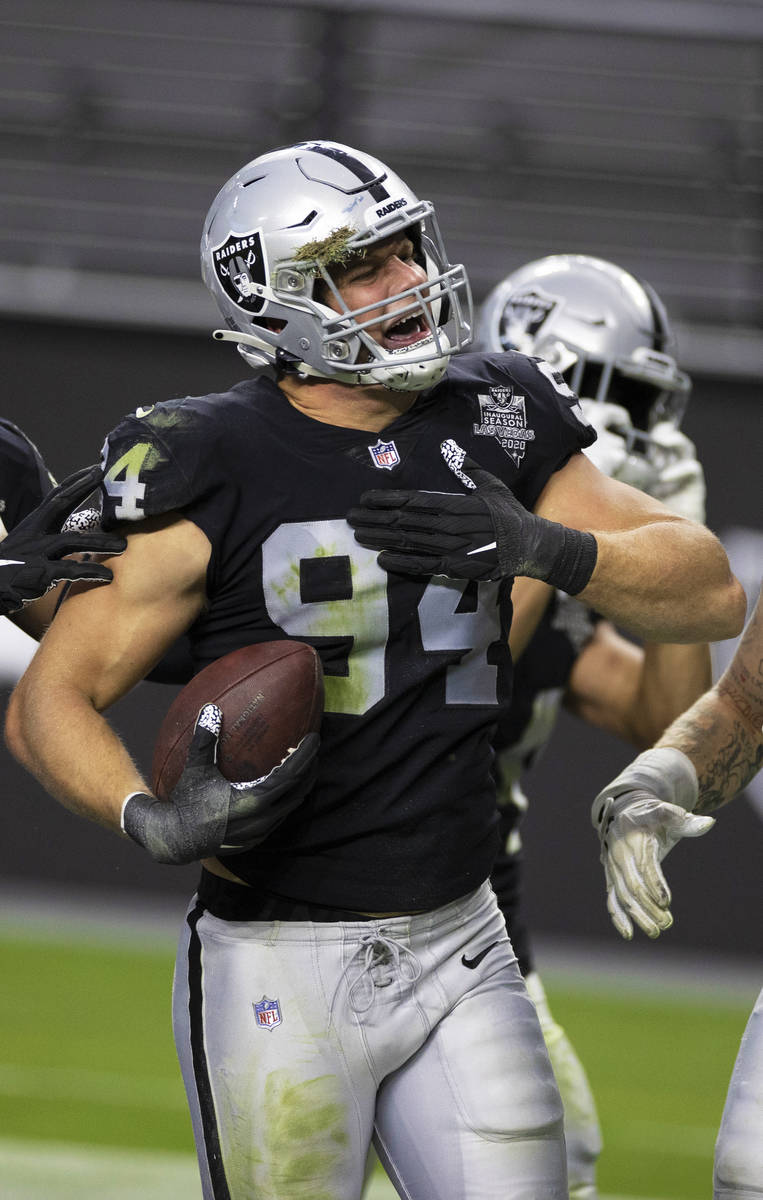 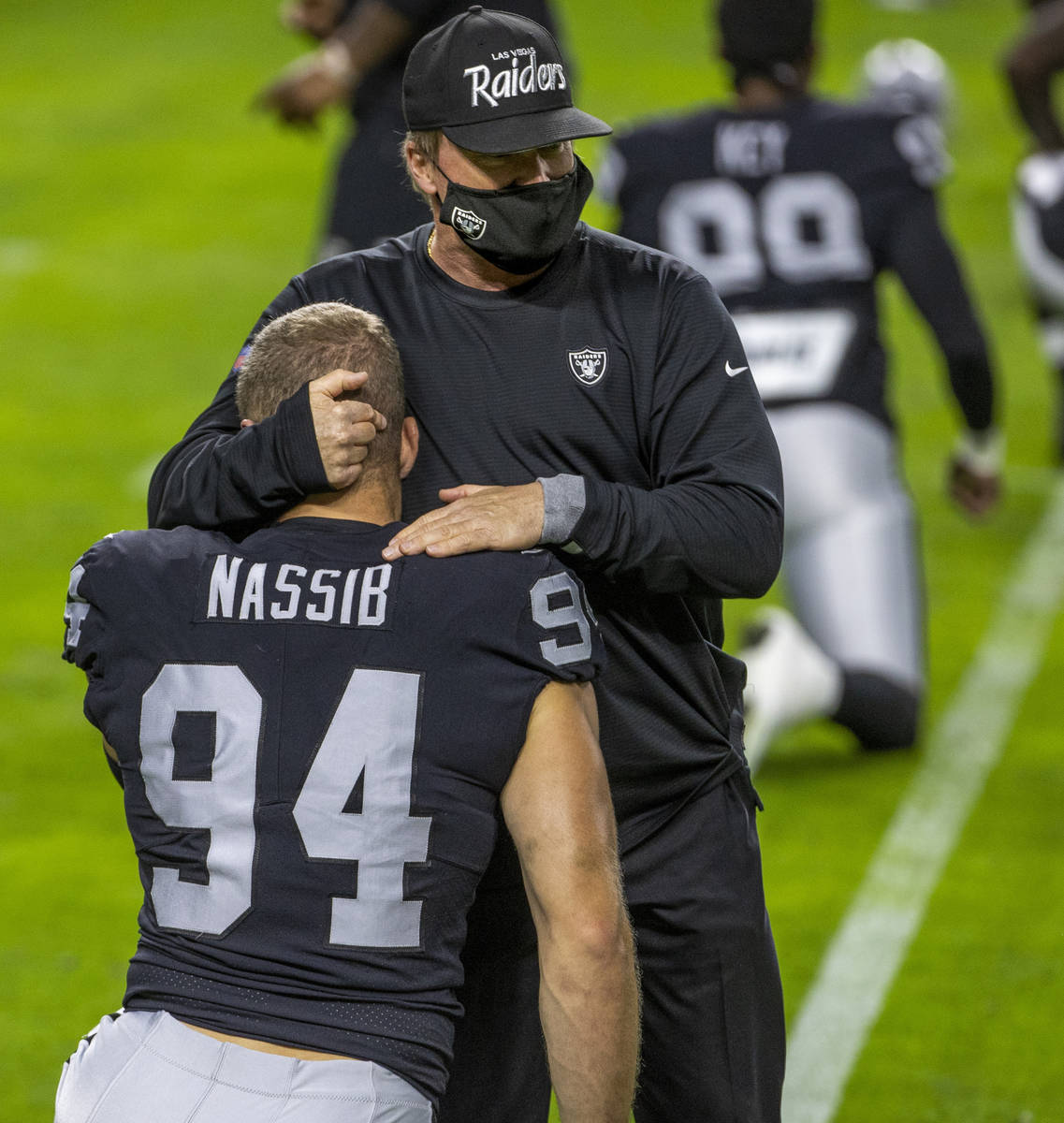 Nassib, a five-year pro football veteran, made the announcement in an Instagram video.

“What’s up people,” Nassib said. “I’m at my house in West Chester, Pennsylvania. I just wanted to take a quick moment to say that I’m gay. I’ve been meaning to do this for a while now but finally feel comfortable getting it off my chest. I really have the best life, the best family, friends and job a guy can ask for.

“I actually hope that one day, videos like this and the whole coming out process are not necessary, but until then I will do my best and my part to cultivate a culture that’s accepting and compassionate.”

What soon followed was a ground-swell of support from across the sports world congratulating Nassib on the courage he showed and pledging support to him, including the Raiders, who tweeted soon after: “Proud of you, Carl.”

“It’s 2021, and I completely support Carl,” Raiders owner Mark Davis said. “It doesn’t change my opinion of him as a person or as a Raider.”

In a text message, Raiders coach Jon Gruden said, “I learned a long time ago what makes a man different is what makes him great.”

Others weighed in, including:

— NFL commissioner Roger Goodell: “The NFL family is proud of Carl for courageously sharing his truth today. Representation matters. We share his hope that someday soon statements like his will no longer be newsworthy as we march toward full equality for the LGBTQ+ community. We wish Carl the best of luck this coming season.”

— NFLPA executive director DeMaurice Smith: “Our union supports Carl and his work with the Trevor Project is proof that he — like our membership — is about making his community and this world a better place not for themselves, but for others.”

— Arizona Cardinals defensive lineman JJ Watt: “Good for you Carl. Glad you feel comfortable enough to share and hopefully someday these types of announcements will no longer be considered breaking news.”

The Raiders have a history of breaking barriers. Tom Flores was the NFL’s first minority head coach to win a Super Bowl. Art Shell was the league’s first African-American head coach. And Amy Trask became the first female CEO of an NFL team.

The Raiders are again trail blazers in an area that has a brief NFL history. Six former players have come out as gay after they retired. And the Rams, then in St. Louis, in 2014 drafted Michael Sam, who came out while playing at the University of Missouri, but he was cut after training camp.

To put a point on his message, Nassib said he was donating $100,000 to the Trevor Project, which promotes suicide prevention for the LGBTQ community.

“The Trevor Project is grateful to Carl Nassib for living his truth and supporting LGBTQ youth,” said Amit Paley, CEO and executive director of The Trevor Project. “This generous donation will help us scale our life-saving crisis services to reach the more than 1.8 million LGBTQ youth who seriously consider suicide each year in the U.S.”

The Penn State product is entering his second season with the Raiders. He has 20.5 career sacks.

In 2014, he was drafted in the third round by Cleveland, where he played for two seasons followed by two seasons with Tampa Bay.

Two other active pro athletes previously came out as gay. Jason Collins of the NBA did so in 2013 before joining the New Jersey Nets. And in 2018, MLS player Collin Martin came out during Pride month while competing for the Minnesota United FC. Collins is retired and Martin is playing for the minor-league United Soccer League.

The enormity of his decision did not appear lost on Nassib, who added a statement on social media later in the day.

“I truly love my life and cannot understand why I have been blessed with so much. I feel especially thankful to have had so much support when many who came before — and many even now — do not,” he said. “I stand on the shoulder of giants, incredible people who paved the way for me to have this opportunity.

“I do not know the history behind our gorgeous LGBTQ community, but I am eager to continue the fight for equality and acceptance.”

If Aaron Rodgers returns to the Green Bay Packers, the ripple effect might be felt all the way to Las Vegas, where Derek Carr was hoping for a reunion with Davante Adams.

End Yannick Ngakoue is one of several new defensive players for the Raiders who begin training camp Tuesday with their sights set on ending a four-year playoff drought.

The Raiders and Golden Knights faced off at the “Battle for Vegas” charity softball game.

The offense has held its own when compared across the league, ranked eighth in yards and 10th in scoring at 27.1 points per game last season.

The Raiders need their new defensive coordinator to fix a unit that has been an Achilles heel for far too long. Priority No. 1 at training camp is getting the defense squared away.

The Raiders on Friday announced the signings of defensive end Malcolm Koonce and linebacker Divine Deablo, ensuring their full rookie class is under contract for the beginning of training camp.

Sports will overrun Las Vegas when the Golden Knights and Raiders play on the same day twice in the upcoming months and the city hosts two All-Star games during the same weekend.