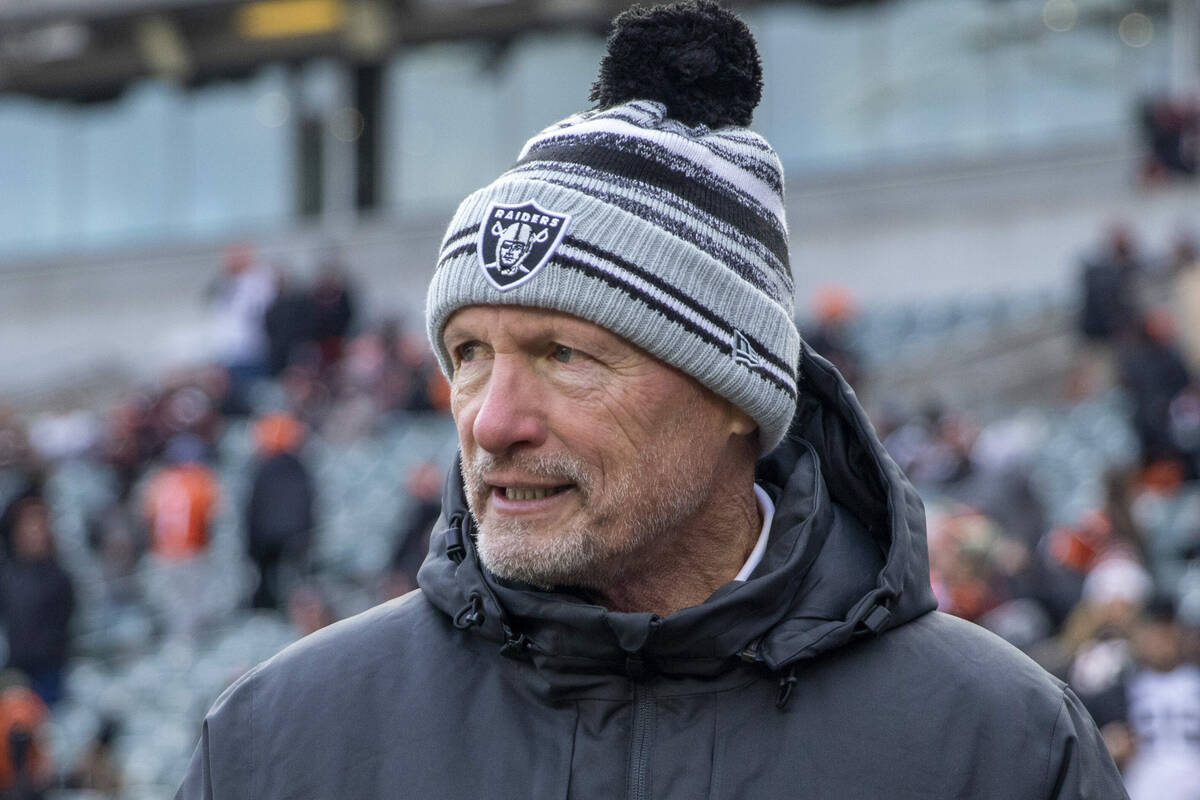 Raiders general manager Mike Mayock on the field before of an NFL playoff game between the Raiders and the Cincinnati Bengals at Paul Brown Stadium on Saturday, Jan. 15, 2022, in Cincinnati. (Heidi Fang/Las Vegas Review-Journal) @HeidiFang 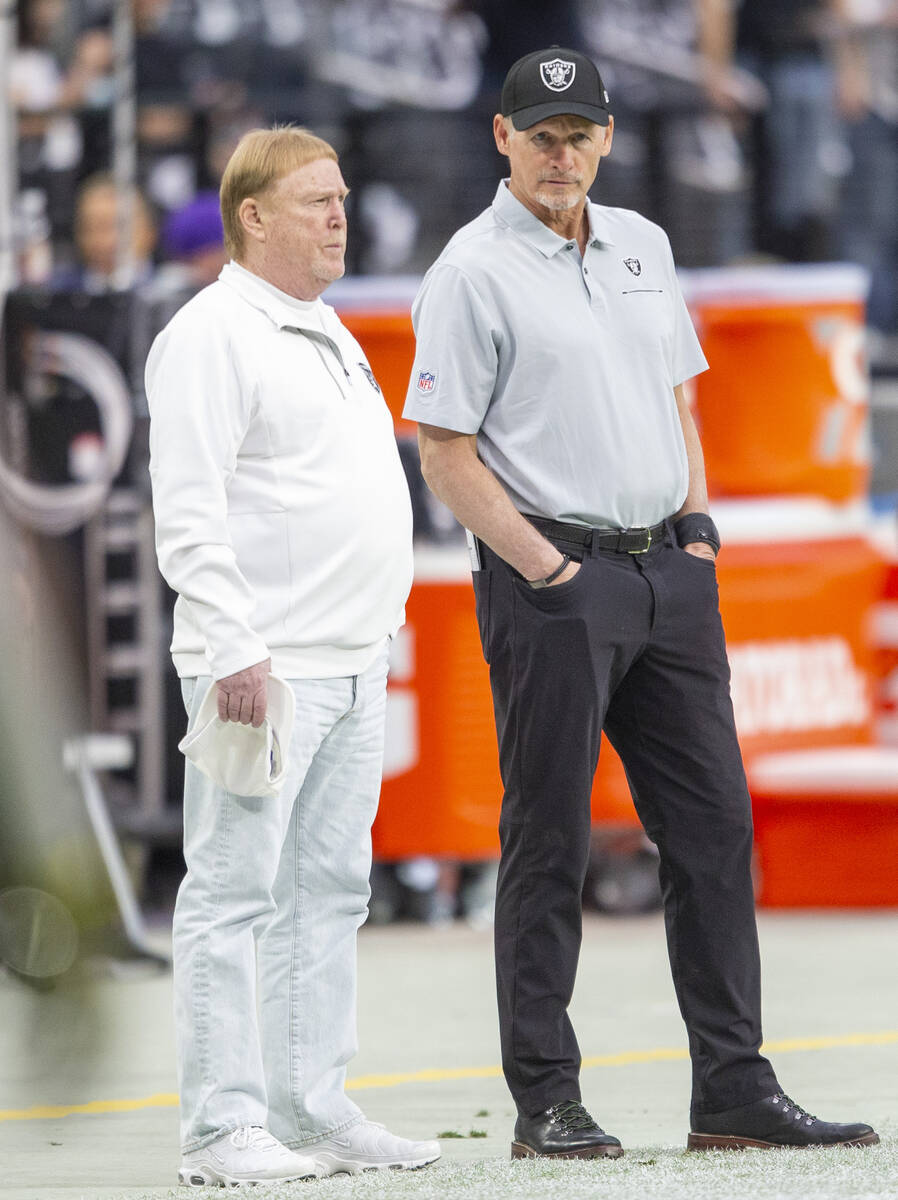 The Raiders fired general manager Mike Mayock on Monday, the first move in what figures to be complete restructuring of the front office and coaching staff.

Mayock, the handpicked choice of then-head coach Jon Gruden in 2019, was done in by numerous failed draft and free-agent decisions.

“We have relieved Mike Mayock of his duties as General Manager of the Las Vegas Raiders,” the Raiders said in a statement released Monday afternoon. “We thank Mike for his contributions over the last three years in helping to form the foundation for the franchise to build upon in its future.”

Raiders owner Mark Davis and players were not available for comment.

Gruden’s resignation last October after a slew of his disparaging emails became public left Mayock in a vulnerable position. Despite the Raiders reaching the playoffs for the first time in five seasons — propelled by some key players Mayock helped secure over the last three years — it was not enough to assure Mayock’s long-term future with the team.

Mayock’s draft work will be noted for some inexplicable errors in the first round and a 2020 draft that is largely a complete wash just one year later. He also failed to maximize the high draft picks the Raiders received in trades of linebacker Khalil Mack and wide receiver Amari Cooper.

Among Mayock’s most misguided selections, he overreached with the fourth pick overall in 2019 when they selected Cle Ferrell, a defensive end who was reduced to reserve duty by his third season. Fellow first-round pick Johnathan Abram has not developed as an elite safety as the Raiders had hoped.

And while running back Josh Jacobs has rushed for more than 1,000 yards in two of his first three seasons, his future with the team is in doubt beyond next season.

It should be noted, though, that Mayock and his staff achieved success later in the draft with the addition of wide receiver Hunter Renfrow, defensive end Maxx Crosby and tight end Foster Moreau in 2019, along with undrafted free agents A.J. Cole, a punter; Alec Ingold, a fullback; and Andre James, a center.

They also added kicker Daniel Carlson, who was cut by the Vikings two games into his rookie year in 2019. Also, second-round cornerback Trayvon Mullen has been a solid player when healthy.

Meanwhile, neither first-round pick from 2020 — wide receiver Henry Ruggs and cornerback Damon Arnette — are still with the team. Of that seven-player 2020 draft, only wide receiver Bryan Edwards (third round) and guard John Simpson (fourth) have earned starting jobs, although neither is considered a difference-maker.

Third-round picks Lynn Bowden, a running back, and Tanner Muse, a linebacker, never played a regular-season down for the Raiders, and fourth-round cornerback Amik Robertson was a healthy scratch for most of the 2021 season.

The Raiders made another overreach with their 2021 first-round pick, Alabama tackle Alex Leatherwood, who was moved to guard three games into his rookie season and graded out as one of the worst guards in the NFL, according to Pro Football Focus.

However, the selections of safety Tre’von Moehrig (second round), cornerback Nate Hobbs (fifth round) and linebacker Divine Deablo (third round) added three starters to the Raiders defense, and defensive end Malcolm Koonce (third round) and safety Tyree Gillespie (fourth round) both have a chance to be solid players.

After some early misses in free agency and the trade market — such as wide receivers Tyrell Williams and Antonio Brown, tackle Trent Brown, safety Lamarcus Joyner and linebackers Nick Kwiatkoski and Cory Littleton, none of whom made the expected contributions — Mayock and the Raiders rebounded this year with a free agency and trade haul.

In Mayock’s three seasons with the Raiders, the club’s record improved each season, culminating this year with a 10-7 regular-season mark and just their second playoff appearance in 18 seasons. The Raiders’ record under Mayock was 25-24.

But it wasn’t enough to secure Mayock’s future with the Raiders. 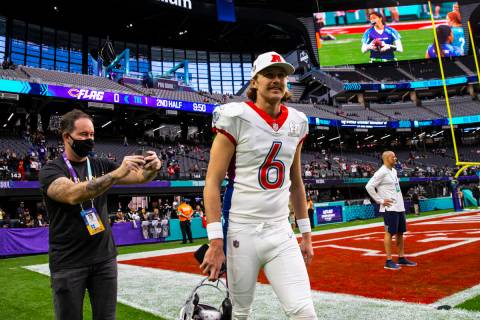