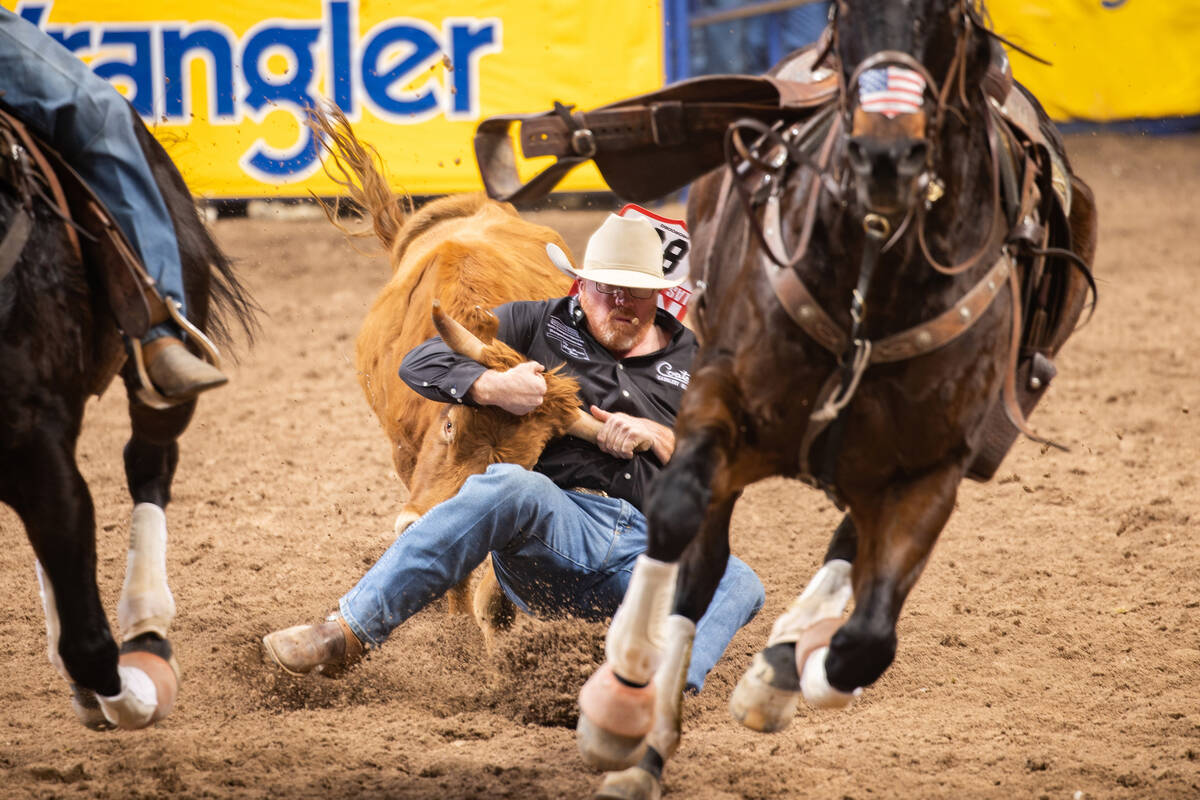 Steer wrestler Stockton Graves works to turf his steer in 3.80 seconds, tying for second place in Tuesday's sixth go-round of the Wrangler National Finals Rodeo. Graves is back at the NFR after a self-imposed 10-year absence to focus on family and his job as a college rodeo coach. (PRCA photo by Phill Kitts)

A 10-year gap between appearances at the Wrangler National Finals Rodeo would generally indicate a tough stretch for a cowboy. Not so for Stockton Graves.

Rather, it’s exactly what the steer wrestler wanted and needed.

“I was pretty much committed to coaching and family,” Graves said.

So after the 2011 Wrangler NFR — his seventh trip to Vegas, on which he cashed in four go-rounds and finished 14th in the world standings — Graves took over as rodeo coach at Northwestern Oklahoma State University, his alma mater. He left behind a string of strong years, most notably 2007, when he won the seventh go-round at the NFR and cashed five nights overall en route to a career-best fifth-place finish in the season-long world standings.

The decision allowed him to stick closer to home and family in Alva, Okla. In the decade since, Graves and wife Crissi had two children — daughter Sequin in 2014 and son Augustus in 2017 — and he has been teaching his craft to the next generation of rodeo athletes. But he didn’t back away entirely from competition. He definitely kept his spurs in the dirt.

“I still rodeoed, tried to stay in the top 50 (on the money list) each year. I like San Antonio, Houston, all those big rodeos,” Graves said.

Graves took 2016 off altogether, and he didn’t compete much in 2020. But a decade was enough for Graves to get the itch and make another run at qualifying for the NFR. As long as he could do it by August, before school was back in session, because he wasn’t giving up his coaching post.

“This year, I started off good with the San Antonio win, and from there, we just kind of played it by ear,” Graves said. “I kept winning, made a little summer run, got hot and made enough money to qualify. That was kind of the plan.”

Good efforts in Dodge City, Kansas, and Puyallup, Washington, helped cement his NFR spot, as he finished the regular season ninth with $71,223. Graves said he was fortunate enough to be able to pick his spots this year.

“I made some strategic decisions throughout the year. I don’t go anywhere that I don’t want to go,” Graves said. “I chose to go to Calgary, and a lot of people didn’t. It paid off. I had a huge week in Calgary.

“I made the summer run worth it, and it worked out. That’s how I rodeo now. For years, I went to everything. Fortunately, I don’t have to do that now, and it’s kind of nice.”

Just as nice, Graves is back in Las Vegas, though it’s not as if he ever really left. In his role as coach at Northwestern Oklahoma State, Graves developed several cowboys who’ve reached the NFR over the past several years. That list includes 2020 world champion steer wrestler Jacob Edler, who fell short of qualifying for the 2021 NFR; fellow steer wrestlers Kyle Irwin, a five-time qualifier; J.D. Struxness, a three-time qualifier; 2020 qualifier Bridger Anderson; and 2021 NFR newcomer Cody Devers, who qualified just behind Graves in 11th.

“That’s been really good,” Graves said, noting he made trips to the NFR to watch his proteges compete. “Nothing makes me more proud than those guys making the NFR. I get more excited watching those guys than being down there competing.”

That said, there certainly still is something to competing in the NFR. At age 42, Graves is eager to make a go at some big paychecks this week. He had his best effort in Tuesday’s sixth go-round, tying for second to pocket $18,724, a night after getting a fourth-place check for $11,321. But the money isn’t the only reason he’s eager to be here.

“It feels great. I’ve always wanted to go back. You miss the camaraderie and the atmosphere of the Thomas &Mack and Las Vegas,” Graves said, noting each night’s Grand Entry is his favorite part of the NFR. “When you’re competing, you don’t really hear the crowd or the music. You’re just zoned out. The time you enjoy it is when you can look around and see the 18,000 fans and take it all in. That’s when you know you’ve made it.”

Ten years later, Graves has indeed made it, for the eighth time in his lengthy and solid career.

“To be able to rodeo at my age, I feel good, I’m healthy. I’m not planning to retire soon. I might not make the Finals again, or hell, I might make it 10 more times,” Graves said. “Am I nervous? Yeah, a little bit. But it’s gonna go the way it’s gonna go. We’ll do everything we can to make it decent.”