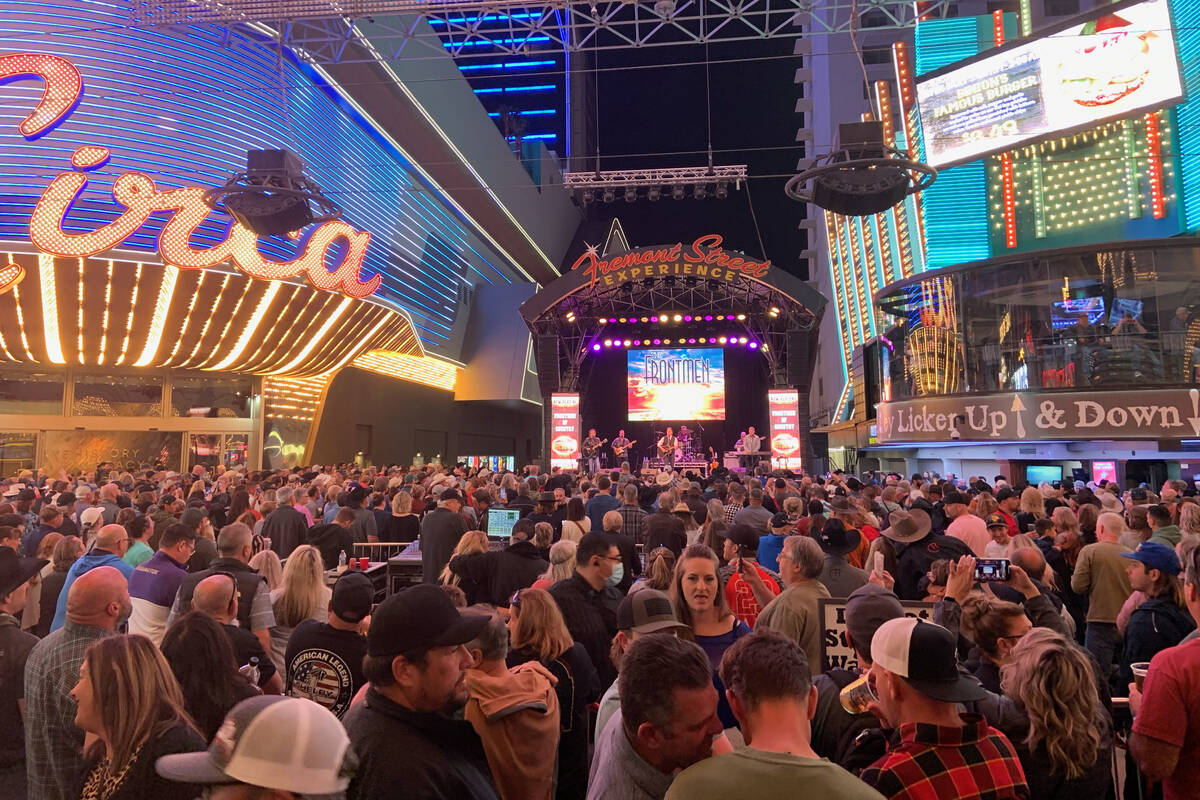 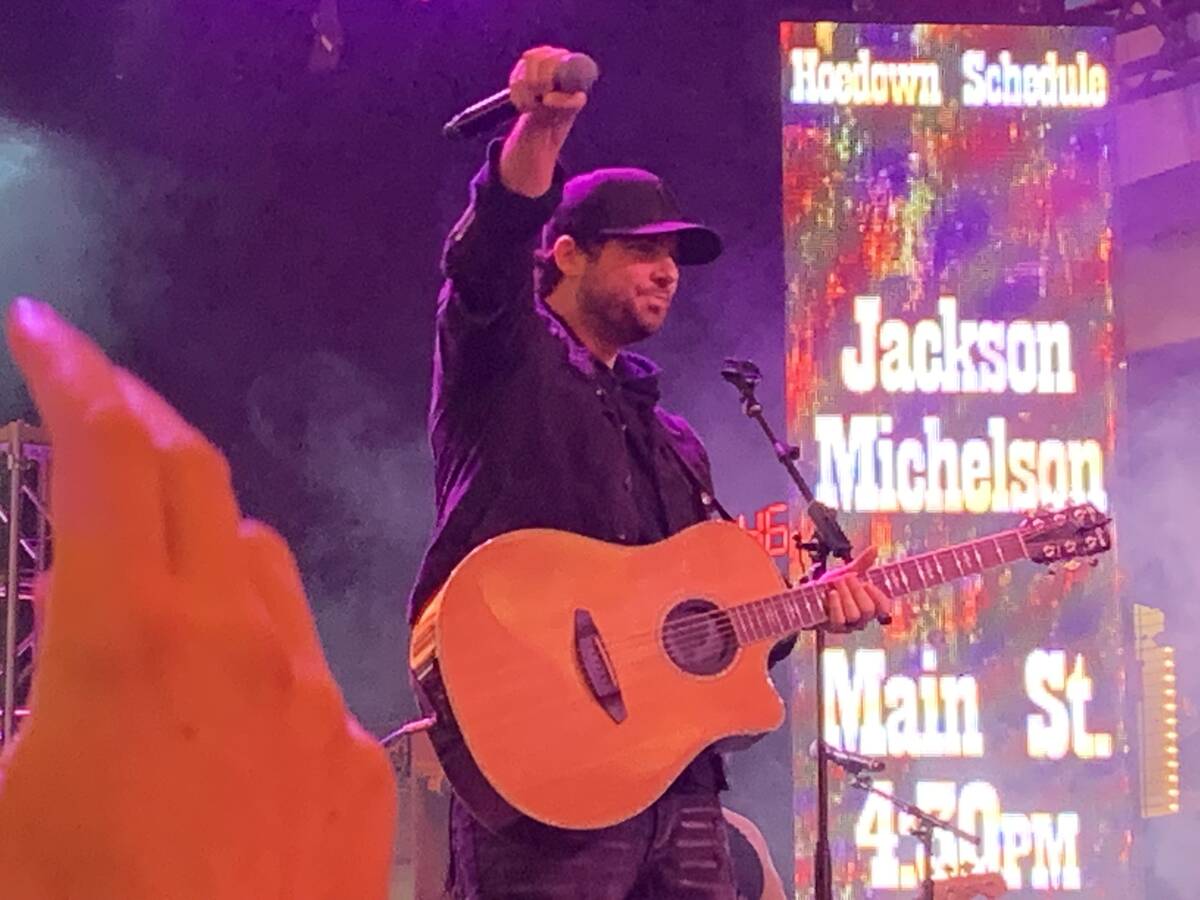 Jackson Michelson plays to the crowd at the Downtown Hoedown prior to the 2019 Wrangler National Finals Rodeo. Downtown will again play a big role in the Wrangler NFR, by way of entertainment on Fremont Street Experience, along with viewing parties and concerts at various properties, including the Downtown Las Vegas Events Center. Photo by Patrick Everson/Special to the Review-Journal

On the Wednesday night before the first go-round, Fremont Street Experience annually hosts the Downtown Hoedown. So on that first Wednesday of December 2020, it was quite the letdown to have no Hoedown, lost to the pandemic.

Thankfully, after a one-year stint in suburban Dallas, the NFR has returned to Vegas, and Fremont Street is already in the midst of a week-and-a-half run that started with Wednesday’s Downtown Hoedown.

“The Hoedown is an absolute blast for us,” said Paul McGuire, chief marketing officer for Fremont Street Experience. “It’s rare that we can activate all three of our permanent stages. This event starts early enough in the evening that it allows us to feature all three stages. The vibe of the city, all those cowboys and cowgirls come out, it’s a tremendous event and a great, positive crowd.”

After the Hoedown, Fremont Street rolls out the red carpet for rodeo fans all 10 nights of the NFR. The video canopy is among the outdoor highlights, and it’s gotten a big jolt of energy since the last Vegas-hosted NFR wrapped up in December 2019.

“We have a new $32 million screen. Previously, we needed darkness to operate the screen. Now, we can use it 24/7,” McGuire said, while noting the massive pillars that support the canopy have LED screens of their own. “You marry the two together, and it provides an immersive visual experience.”

Then there’s the glorious new elephant in the Fremont Street room.

“Since we last experienced the NFR, we have a brand-new shiny toy called Circa,” McGuire said, alluding to the bold downtown casino that opened in the fall of 2020, the brainchild of Derek Stevens. “Circa complements very nicely the NFR itself.”

Stevens, arguably the biggest cheerleader in bringing Las Vegas back from a lost year, certainly won’t argue McGuire’s point. He’s eager to have another downtown property — Stevens also owns The D and the Golden Gate — in play for the NFR.

“We’ve always been a big supporter of the NFR, even before my time in Vegas with the Golden Gate and The D,” said Stevens, who as a Las Vegas Events board member has been prominent in promoting the NFR. “With Circa coming into the mix, it provides another alternative for people staying downtown. Even with the pandemic, Las Vegas never stopped growing. If you haven’t been here in two years or longer, there’s a lot of new in Las Vegas. We at Circa are certainly excited to be involved, excited to have the NFR back in town. We’re gonna cater to a lot of cowboys and cowgirls, and their fans.”

And not just at Stevens’ sparkling new venue — which features Barry’s Downtown Prime steakhouse, incredible views from the rooftop Legacy Club, and the popular Stadium Swim venue — but at the Downtown Las Vegas Events Center, which has one of the larger footprints for NFR viewing parties.

“The key for us is what we’ve done at the Downtown Las Vegas Events Center. We show the NFR live every night. We bring in music, there’s a dance floor, the live rodeo feed, great food and drink,” Stevens said. “People often come to the NFR for four days, but maybe only attend the NFR on one or two nights. So then, they’re looking for other venues to come and watch. Watch parties are really up our alley, and we’re planning on blowing it out this year.”

The Golden Nugget has a long and successful relationship with the NFR, which has been in Vegas since 1985. Hollie O’Brien, vice president of marketing for the Golden Nugget, is easily as excited as McGuire and Stevens to have this show back on the road in 2021.

“Obviously, we consider ourselves to be part of the fabric of Las Vegas and of downtown. As such, we have a rich history with and loyalty to the NFR,” O’Brien said. “We were one of the very first properties to provide headline entertainment during the NFR.”

Charlie Daniels, Tanya Tucker and countless others made their way through the Golden Nugget’s showroom over the years. Jo Dee Messina kicked things off Thursday night, Tanya Tucker plays tonight, followed by plenty more star power each night of the NFR. Jamey Johnson wraps things up on Dec. 10.

“We have phenomenal entertainment every night,” O’Brien said. “Let’s face it, the party is still going after the rodeo each night.”

Per usual, the Golden Nugget also serves as headquarters to the 15 barrel racers who qualify for the Wrangler NFR. That in itself is a welcome recurrence for O’Brien.

“The little girls come out and line up around the building for autograph sessions. It’s very sweet,” she said.

After a year away, the NFR’s return and downtown Vegas’ role in the event simply can’t be overstated.

“The NFR was really missed for the vibe it brings,” McGuire said. “The NFR is huge for the destination, and then we’re a destination within the destination. We have everybody coming down here to set the tone. We are absolutely thrilled to have them back, and this year will be bigger and better than ever.”