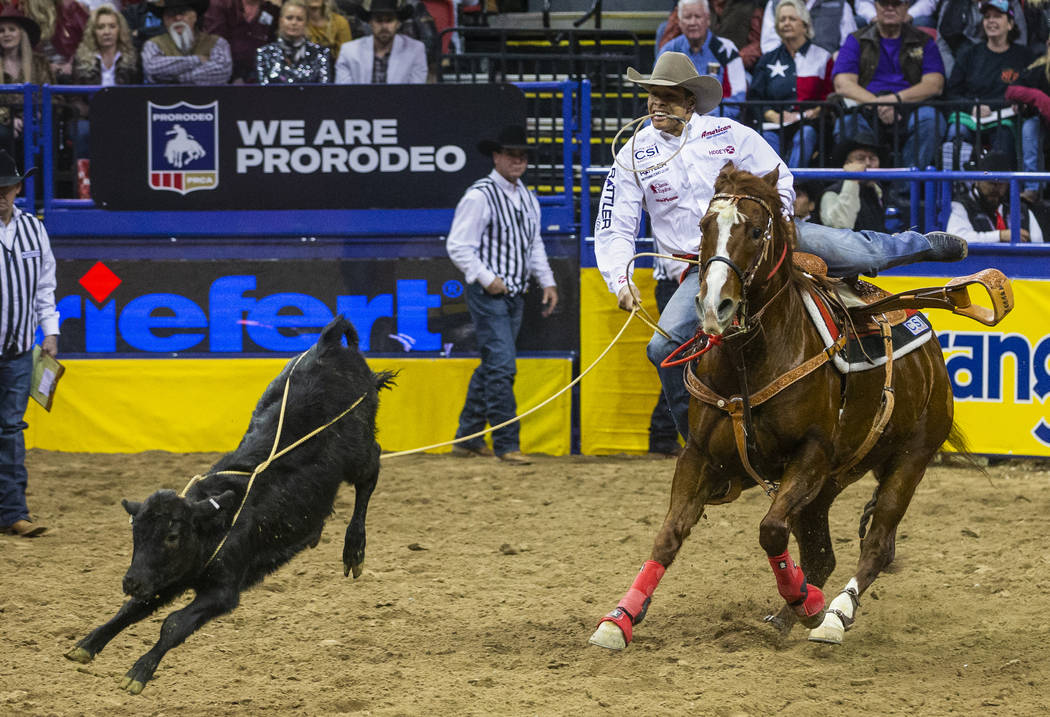 Shad Mayfield of of Clovis, N.M., eyes a roped calf in Tie-Down Roping during the sixth go round of the Wrangler National Finals Rodeo at the Thomas & Mack Center on Tuesday, Dec. 10, 2019, in Las Vegas. (L.E. Baskow/Las Vegas Review-Journal) @Left_Eye_Images 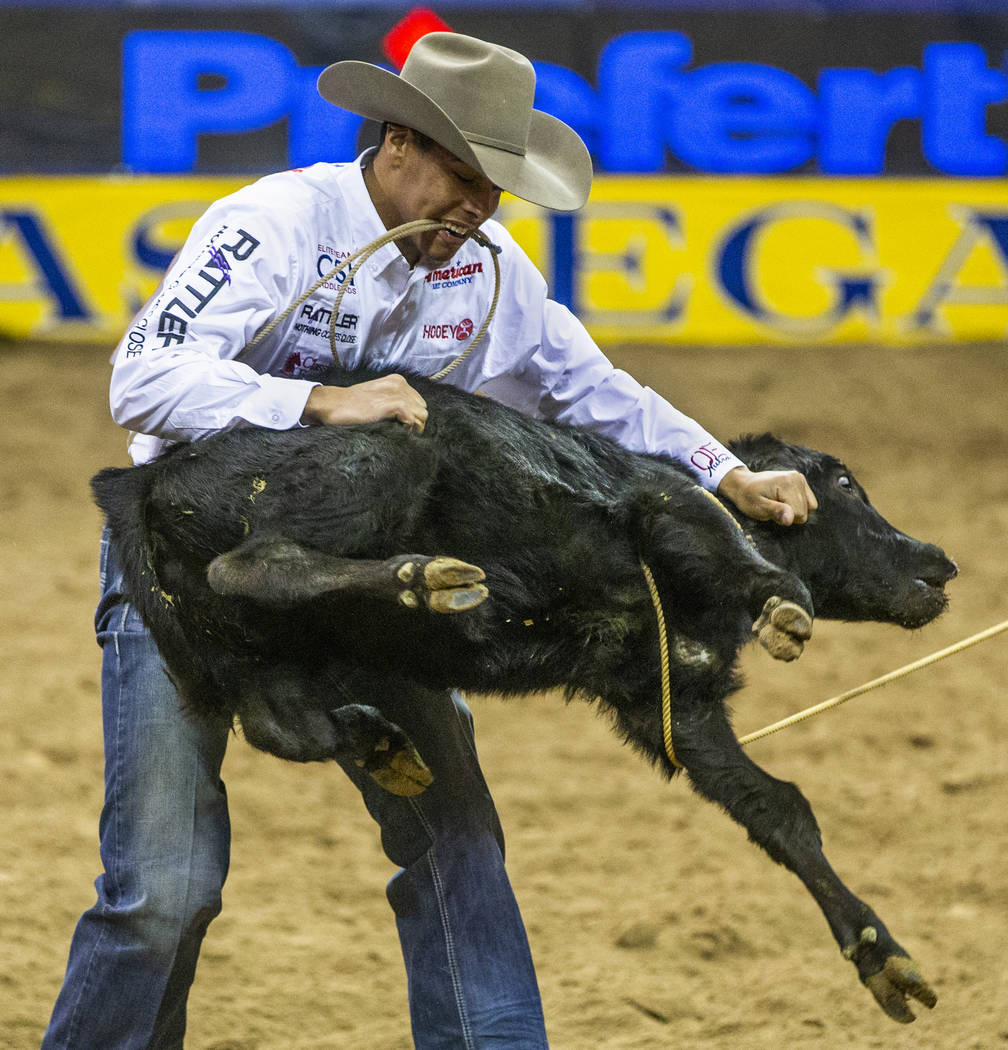 Shad Mayfield of of Clovis, N.M., tosses a roped calf in Tie-Down Roping during the sixth go round of the Wrangler National Finals Rodeo at the Thomas & Mack Center on Tuesday, Dec. 10, 2019, in Las Vegas. (L.E. Baskow/Las Vegas Review-Journal) @Left_Eye_Images

Shad Mayfield took a pretty quick path to the Wrangler National Finals Rodeo. In July 2018, the tie-down roper won the National High School Rodeo Association championship. Seventeen months later, he is in Las Vegas for the biggest rodeo of them all.

As a rookie, who just turned 19 a month ago. That makes him the youngest of this year’s 120 Wrangler NFR qualifiers.

“At first, it’s a surprise, but then it sinks in, and you realize it’s something you worked your whole life for and always wanted to do,” Mayfield said. “I’ve watched the NFR on TV for years, ever since I was little.”

And he had some top-quality roping in his DNA, as his father, Sylvester Mayfield, was a two-time Wrangler NFR qualifier in 1985 and 1987. Shad learned plenty about rodeo growing up, and he got a huge assist in his first full professional season, as dad and son were on the road together.

“He taught me how to rope, and I’m following in his footsteps,” Shad said. “He went out all summer with me, helped me drive, helped me with my horses. It was huge having his guidance. He’s been there, done that. There’s a lot more to it than just being out there competing. He’s as big a reason as any that I made it to the NFR.”

Dad certainly enjoyed the ride, as well, saying it brought back memories of his days competing against the likes of Roy “Super Looper” Cooper.

“It was like I was back in the box, doing it myself,” Shad said. “There were a lot of ups and downs. We were on the road night and day. I never stayed on the road the way I did with him. He learned a lot and really figured out how to handle himself. He’s really worked hard at it.”

So when did this youngster from Clovis, N.M., first think that riding at the Thomas & Mack Center in his first season was a possibility?

“At Cheyenne, when I got into the top 15, I realized I had a chance,” Shad said. “Then about two to three weeks from the end, I got sick. I wanted to make a stop home and practice and rest but just couldn’t, because I was in 15th. That’s tough.”

Shad, though, proved to be tougher than his illness.

“I cashed in seven of my last nine rodeos,” he said. “I got lucky. I drew so good at those rodeos. I roped good and did really well on the ground. Before that last run, I was just $2,000 ahead of 16th. I needed it. Plus, I didn’t want to be the first rider out at the Finals — 15th ropes first.”

On that final regular-season run, at the Cowboy Capital of the World Rodeo in Stephenville, Texas, Shad topped the field with a first-place run of 7.5 seconds to pocket about $2,500. His late-season surge, sickness and all, allowed him to finish 13th in the regular-season world standings, with $90,421 in earnings.

“I have a really good horse. He’s just made it so easy for me,” Shad said of his trusty steed Django. “I’ve roped against some of the tougher guys since I was 14 or 15. My horse is a big part of my success. He sets me up to win every time out.”

Shad didn’t cash Tuesday night, which dropped him to 12th in the world standings, but there’s still plenty of money to be won between now and Saturday night. Regardless, he is going to enjoy the first of what he hopes are many Wrangler NFR appearances.

“I’m just excited to be there,” Shad said. “I’d been hearing all the hype about the NFR and was ready to try it out. I’m amped up.”