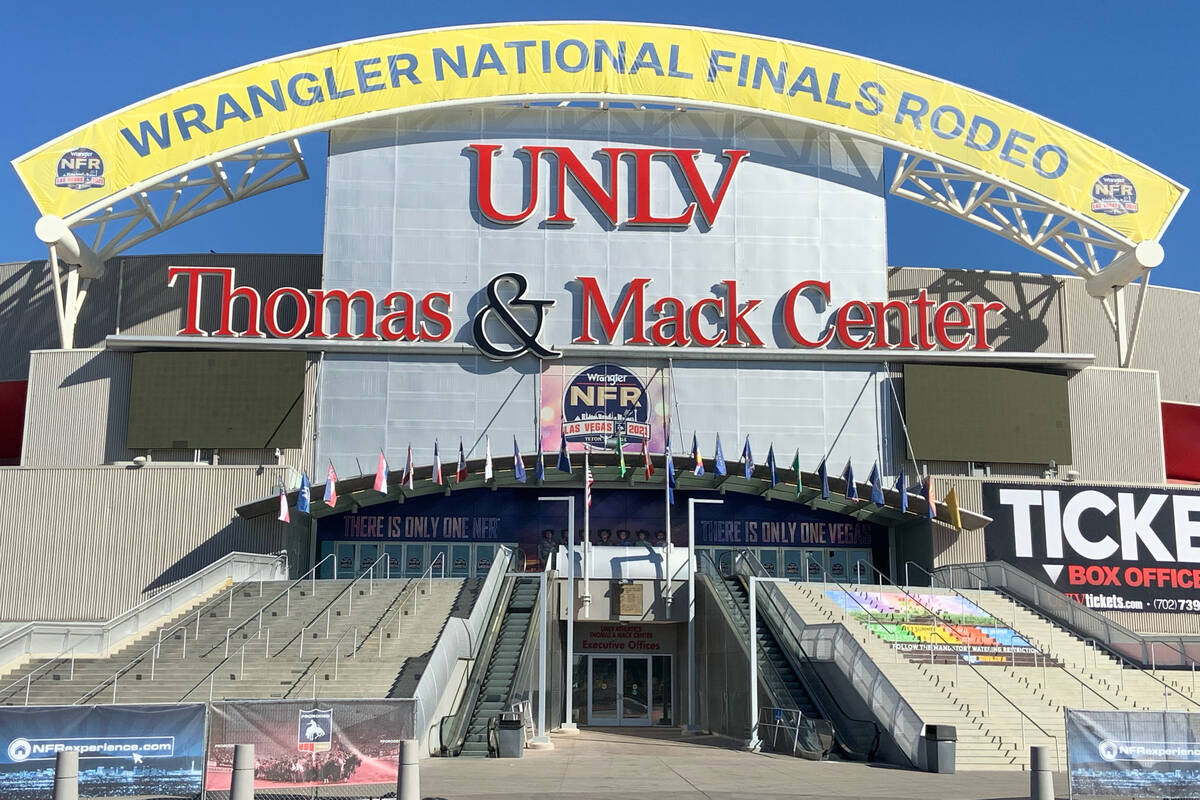 After a one-year absence from Las Vegas, the Wrangler National Finals Rodeo returns for its 36th run at the Thomas & Mack Center. The NFR begins tonight and runs through Dec. 11. Photo by Patrick Everson/Special to the Review-Journal 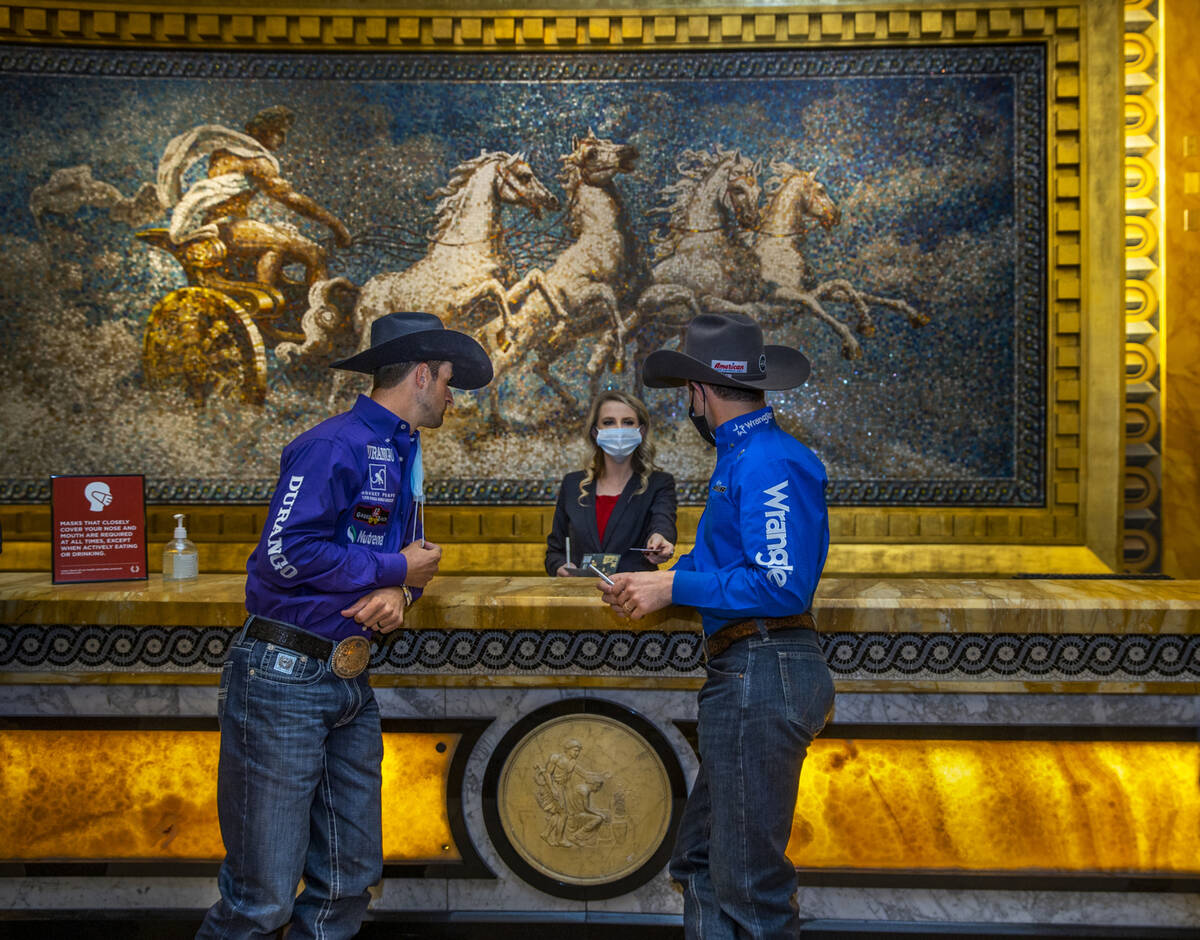 Over the past 36 years, Las Vegas and the Wrangler National Finals Rodeo have become inseparable. The city and the Super Bowl of rodeo were seemingly built for each other, proven by the annual 10-day event’s explosive and continued growth.

The NFR was a freight train of fun for attendees, and it provided a significant jolt to the city’s economy every December, a typically slow time.

Then came COVID, just as it did for pretty much everything else in 2020. The NFR still happened last December but was forced to move to Arlington, Texas. While the show went on, it certainly wasn’t the same.

Thankfully, that show is back where it belongs. Perhaps no one is happier than Las Vegas Events President Pat Christenson, whose fingerprints have been on the NFR pretty much since it first moved to the Thomas & Mack Center in 1985.

“It is a relief to be back from COVID,” Christenson said, while noting the NFR team took advantage of these past 24 months. “The fact that we really had two years to plan for this has given us the opportunity to make hundreds of small improvements and dozens of major improvements. Fans are going to see these improvements all around the city, not just at the Thomas Mack.”

For example, there’s the new Stay Your Way initiative, allowing fans to look at different options of where they want to stay and what they want to do during the NFR. At the Thomas & Mack, the area formally called The Shoe — an interactive area that included a live viewing party — is now Aces High, which will still house a nightly viewing party, with an NFR museum exhibiting the history of the event at the Thomas & Mack Center.

And those are but two of countless upgrades.

“We’re always making improvements, but not to the degree we have this year,” Christenson said. “We were able to do much more than we had the opportunity to do in the past.”

There’s a new NFR general manager, as well, with Allen Rheinheimer taking the reins from Glen Alan Phillips. But as they say in cowboy parlance, this isn’t Rheinheimer’s first rodeo. He’s been involved with the NFR since 2000, so he certainly understood the importance of a return to home base.

“We’re so excited to be back in Vegas. There are so many things that are such a plus. The fan experience is like no other town in the country,” Rheinheimer said. “Texas served a good purpose, but the experience just isn’t the same. Las Vegas hosts the NFR like no other city in the world. How Vegas rolls out the red carpet for this event is amazing. There’s no stone unturned to make it a great experience for the fans.”

While COVID wreaked havoc on innumerable businesses and employees, Rheinheimer said the NFR crew is 99 percent intact. And though it was difficult to predict early this year whether the pandemic would continue wreaking havoc, Rheinheimer and his team understood the need to get the NFR back up and running in Vegas.

“In 2020, everybody was hurting throughout the year. COVID created chaos in all aspects of the world. Vegas not having this event, it was truly missed, from a financial standpoint to the fan experience. The overall setting in Vegas makes a huge difference,” Rheinheimer said. “Back in March, when I first took this job, we started out with the mindset that it was gonna be in Vegas. We have not turned back or even thought about it. It’s so important to be back in Vegas.

“It’s monumental to all these people — the contestants, the stock contractors, the staff and the fans. It’s a huge thing to come back for the fans.”

And as Rheinheimer alluded to, the economic impact each December is a hefty jolt for the region. Christenson said that impact is approaching $200 million annually just from Thomas & Mack Center receipts — tickets, food and beverage sales, souvenirs, etc.

“But there are two to three times more people in town who don’t get a ticket to the NFR. The concept is to give fans as many choices as possible beyond attending the NFR. So the total economic impact is probably three times that,” Christenson said, while noting the entirety of the 10-day experience is what makes Las Vegas irreplaceable.

“I think the difference is that in Vegas, it’s a very intimate arena, and then 22 different venues to see it for free all around town. And not just on TV, you get the live feed on big screens, and there are giveaways. The viewing parties are much like Super Bowl parties, except they’re free.”

Then there’s all the ancillary events. The Cowboy Christmas and Western Outdoor Expo expanded this year, opening Wednesday afternoon and adding more entertainment elements, including an afternoon tailgate-type party before each night’s go-round. Of course, the expo still has countless hundreds of exhibitors, promoting everything from Western wear to rodeo gear to totally decked-out travel trailers and more.

And there’s all the nightly activity up and down the Strip, downtown on Fremont Street and at the South Point, which becomes Cowboy/Cowgirl HQ during the NFR, particularly for the nightly go-round buckle presentations.

“There’s a variety of entertainment. When we do this event, it’s a festival. More than 60 concerts, 22 viewing parties and everything else Vegas has to offer,” Christenson said, adding that the newest major property, Resorts World, is already jumping into the NFR experience with both boots, as well. “The new kid on the block is gonna make a statement.”

Rheinheimer summed it up nicely.

“If you’re bored in Vegas during the NFR, you’re really not trying!”