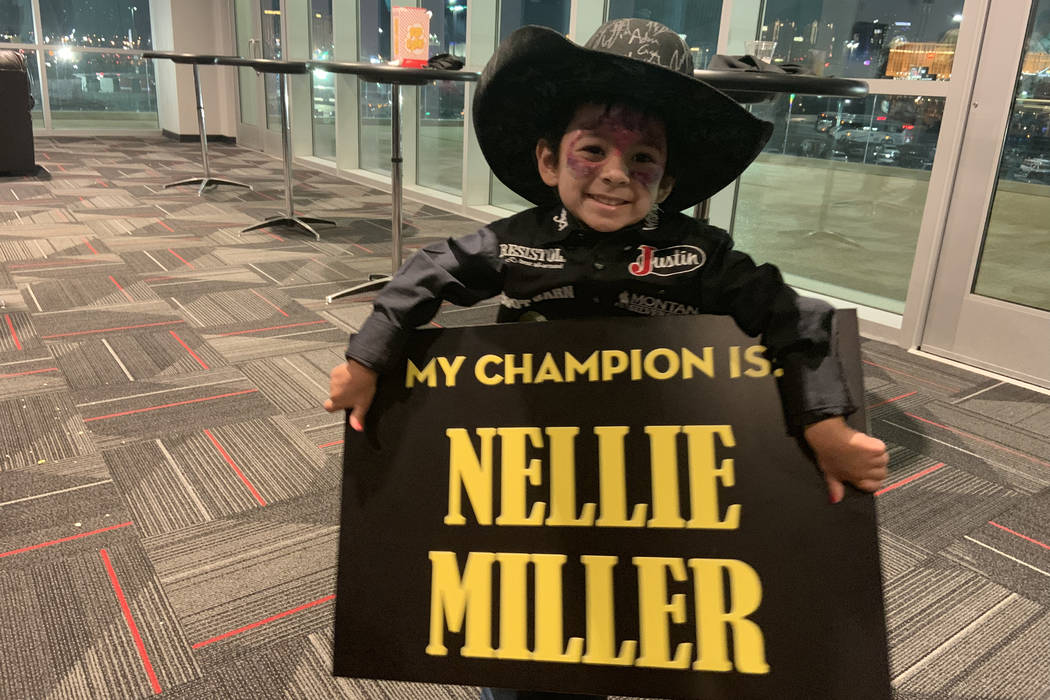 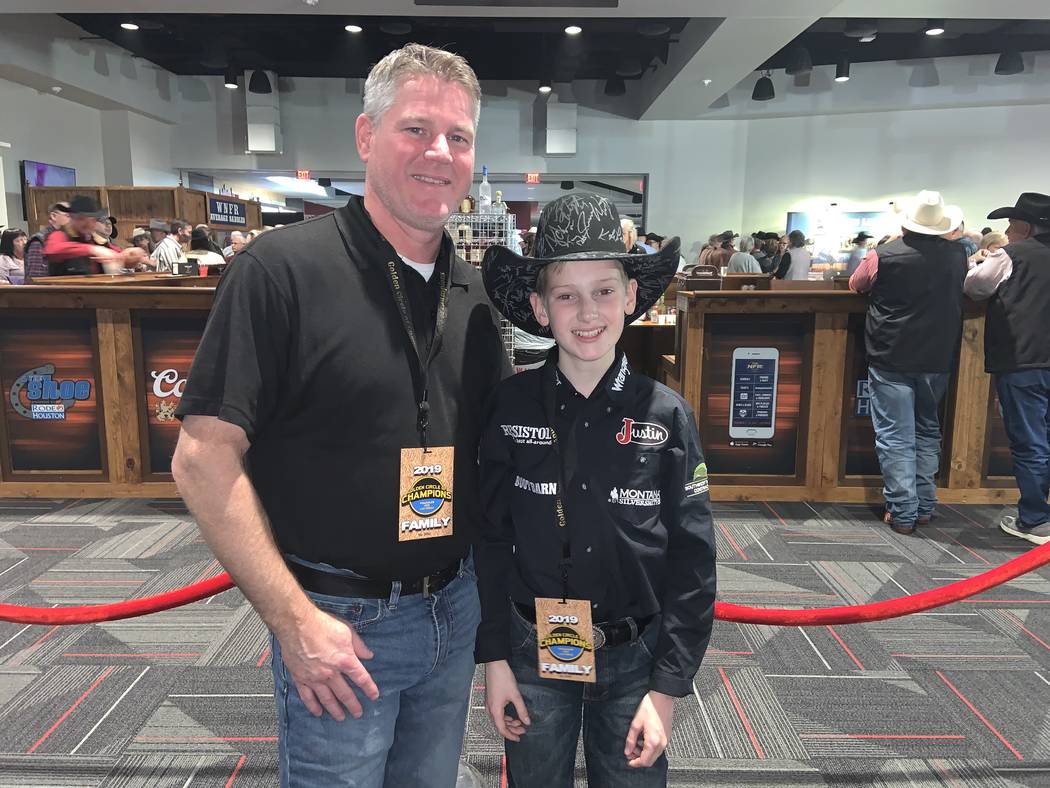 Seth Permenter, with his father Lance Permenter at the Golden Circle of Champions event Sunday, has won two bouts against cancer in the past three years. Permenter was one of 20 honorees -- 10 from across the country, 10 from Southern Nevada -- who along with their families attended a luncheon with Wrangler NFR contestants on Sunday, then went to the Thomas & Mack Center to watch the fourth go-round of the NFR. Patrick Everson/Las Vegas Review-Journal

In 2018, the Wrangler National Finals Rodeo welcomed a new charitable event to its fold, the Golden Circle of Champions. Twenty pediatric patients who are fighting or have beaten cancer — 10 from across the country, and 10 from Southern Nevada — were treated to a weekend of rodeo festivities in Las Vegas.

It’s not a new concept, but rather a local concept gone national. The Golden Circle of Champions is the brainchild of the Santa Maria (California) Elks Rodeo. For the past three years, the Santa Maria rodeo committee has honored the memory of Lexi Brown — a 12-year-old rodeo fan who died from cancer in 2016 — by honoring 10 local pediatric cancer patients at its rodeo.

“Pat Christenson kicked this off. He was the first person I spoke to about this,” Tonascia said, adding there was no hesitation in their decision. “It was not whether they were going to help us. It was, ‘Tina, what do you need us to do?’ ”

What they did was provide an all-expenses-paid trip to Las Vegas for children and family members, a big luncheon at the South Point that included NFR contestants serving as buddies to each of the children, then a dinner and seats for a go-round of the rodeo at the Thomas & Mack Center.

All those forces, along with the Nevada Childhood Cancer Foundation, joined together again this year, giving 20 pediatric cancer patients/survivors and their families a memorable Sunday of rodeo. That included Seth Permenter, a 13-year-old from San Antonio who’s been dealt a hand no child should ever have to face.

First, a bone cancer diagnosis in his lower left leg in November 2016. He beat that by August 2017. Second, in June of 2018, doctors found a spot on a heart valve and on his lungs. Cancer, again.

“I was pretty scared,” Seth said, before explaining what got him through such a trial. “God and my family. They just supported me. The hardest part about the second time was just knowing I had to do it all again.”

“It’s all clear right now. I’ve been cancer-free for about a year,” he said.

Seth has long been a big rodeo fan. So when Ropin’ Dreams Rodeo in nearby Pleasanton, Texas, reached out to find potential patients/survivors to be considered for the 2019 Wrangler NFR Golden Circle of Champions, he and his family were eager to sign up. And he was thrilled to be selected.

“This is really cool. It was nice to meet some of the cowboys,” Seth said shortly before the start of the rodeo. “I like the bull riding and the barrel racing. The bull riding is funny when they’re getting thrown all around by the bull. And the barrel racing, I just like racing in general, so it’s fun watching them ride those horses that fast. I love it.”

Lance Permenter, Seth’s father, enjoyed the festivities, too. It’s quite the 180-degree change from what the family has gone through the past three years.

“It’s been scary, stressful, just a pure nightmare. Obviously, Seth’s the one dealing with the surgeries and everything, but it affects everybody,” Lance said, noting that he, wife Sarah and 15-year-old daughter Abby helped Seth however they could. “We just showed up. You do what you have to do. He said God helped get him through it. What got us through it was Seth, his positive attitude.

“Now, we’re just thankful that we’re kind of through that storm and that he’s on the mend. This has been a really cool trip. Everyone has been amazing. It’s a really, really neat deal. To have the cowboys and cowgirls come out and give their time, just hours before they compete, is pretty impressive.”

The Santa Rosa rodeo committee chose 4-year-old Aryia Ramos as its honoree for the 2019 NFR. Aryia was bubbling over at the pre-rodeo dinner, still excited about all the time she got to spend with 2017 world barrel racing champion Nellie Miller at the luncheon.

“She told me to wear her scarf,” Aryia said. “I’m gonna make up a song about me and Nellie.”

Aryia traveled to Las Vegas with parents Roberto and Samantha Ramos and 2-year-old brother Maximus. Samantha relayed Aryia’s story, which gratefully was another of success. In September 2018, a tumor was found on Aryia’s adrenal gland, and she was diagnosed with Stage 3 neuroblastoma.

“It’s heartbreaking, it’s scary. You think, ‘How could this happen?’ ” Samantha said. “But she has been amazing. She’s very mature for a 4-year-old.”

And tough as nails. Aryia has nothing but clear scans since February and is due to finish treatment Dec. 29. So she’s healthy enough to really enjoy this trip, after a difficult 15 months.

“To be able to experience this, her having fun, it’s the greatest thing. All these kids put up with so much,” Samantha said.

Tonascia couldn’t speak highly enough of the Wrangler NFR contestants on hand for the luncheon, and really all of the contestants. Each child got a new cowboy hat autographed by all 120 NFR qualifiers, a veritable who’s who of rodeo.

“Those cowboys and cowgirls were amazing,” Tonascia said, noting every contestant joined in the autograph signing last Tuesday night. “They knew what we were here for, and they asked what they could to help. Their support was absolutely overwhelming.”

It’s all more than worth it to see these 20 kids’ faces light up again and again, all day long. And it’s emotional in the best possible way for the parents of these tough youngsters, seeing a side of their kids that for a while was stolen away.

“It’s pure joy,” Lance said. “Seth missed more than a full year of life. He was in a wheelchair for probably eight months, then on crutches another four months. There was eight months of treatment in the hospital.

“To see him have this opportunity, to get to live life, to be a kid, he’s getting some of that lost time back.”