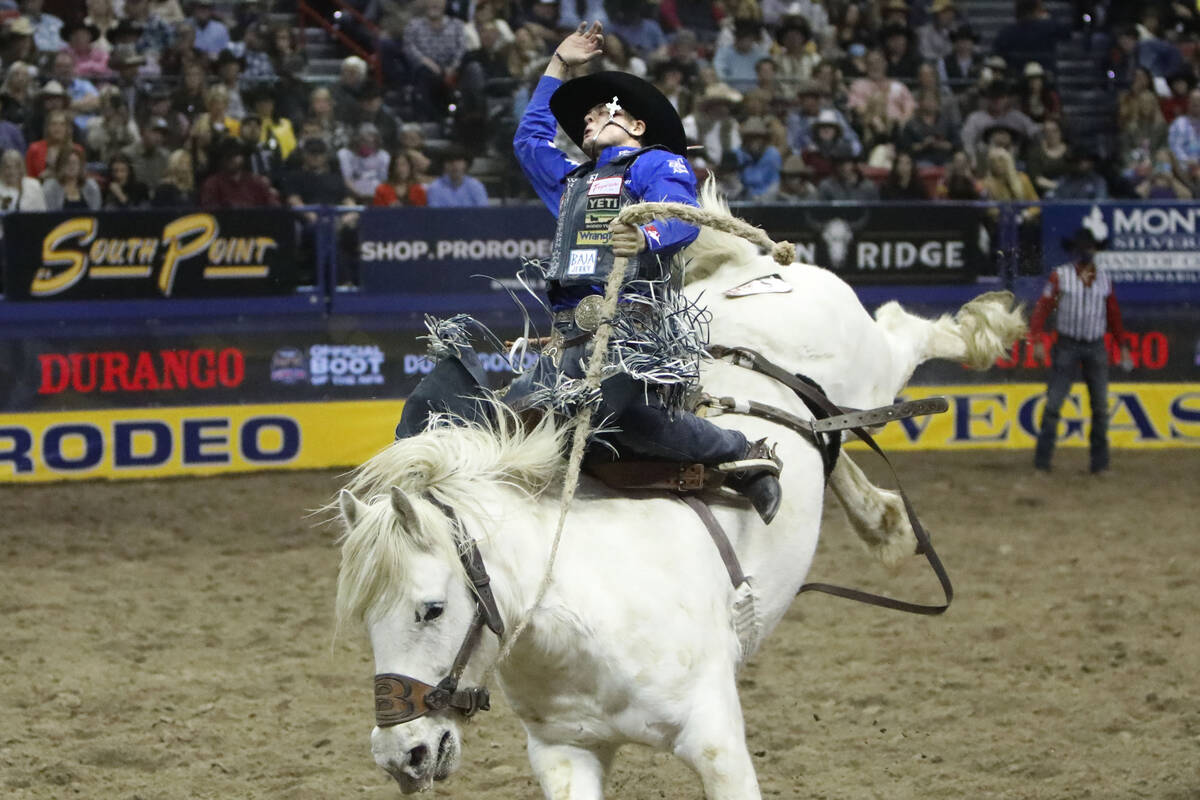 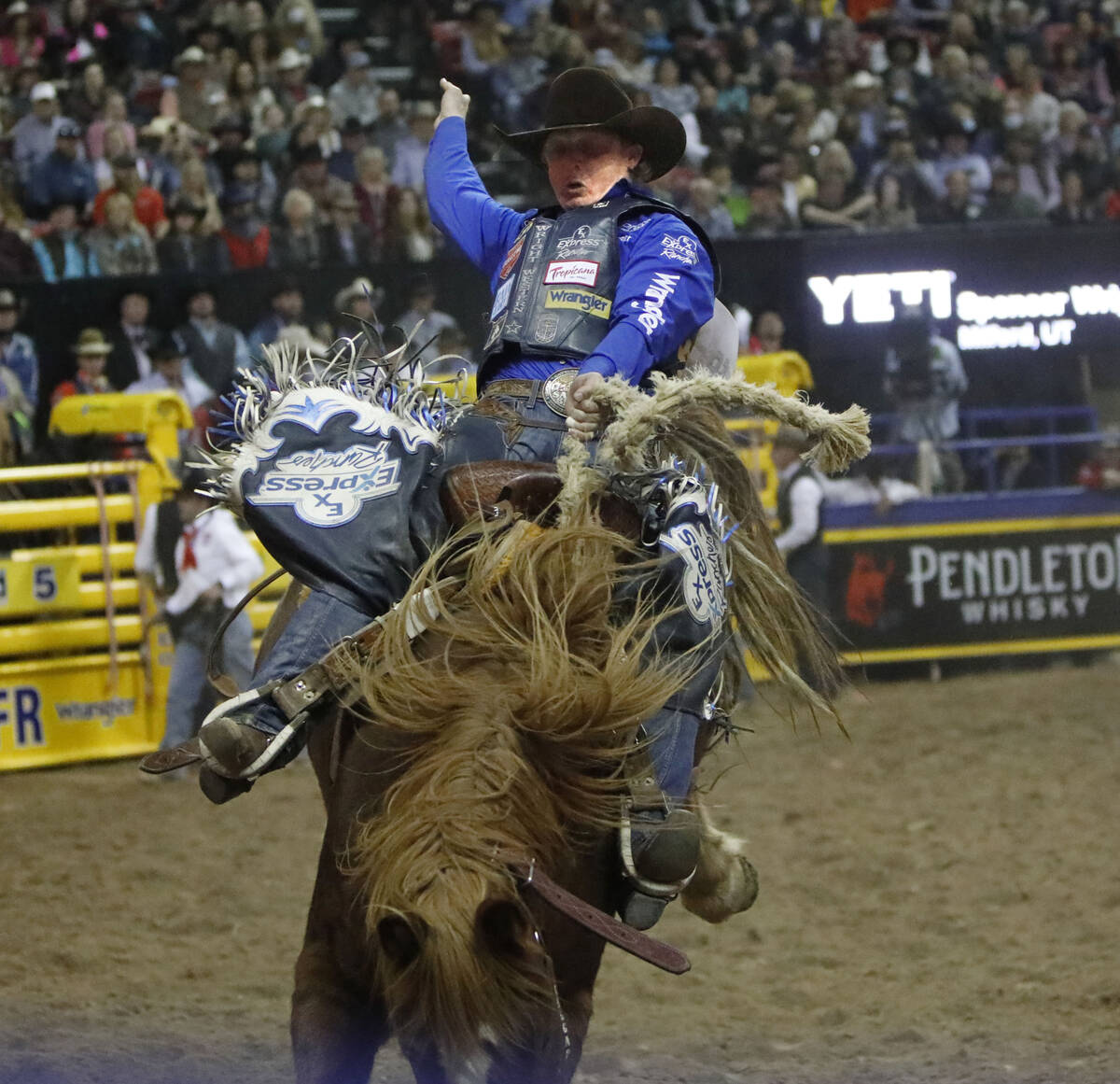 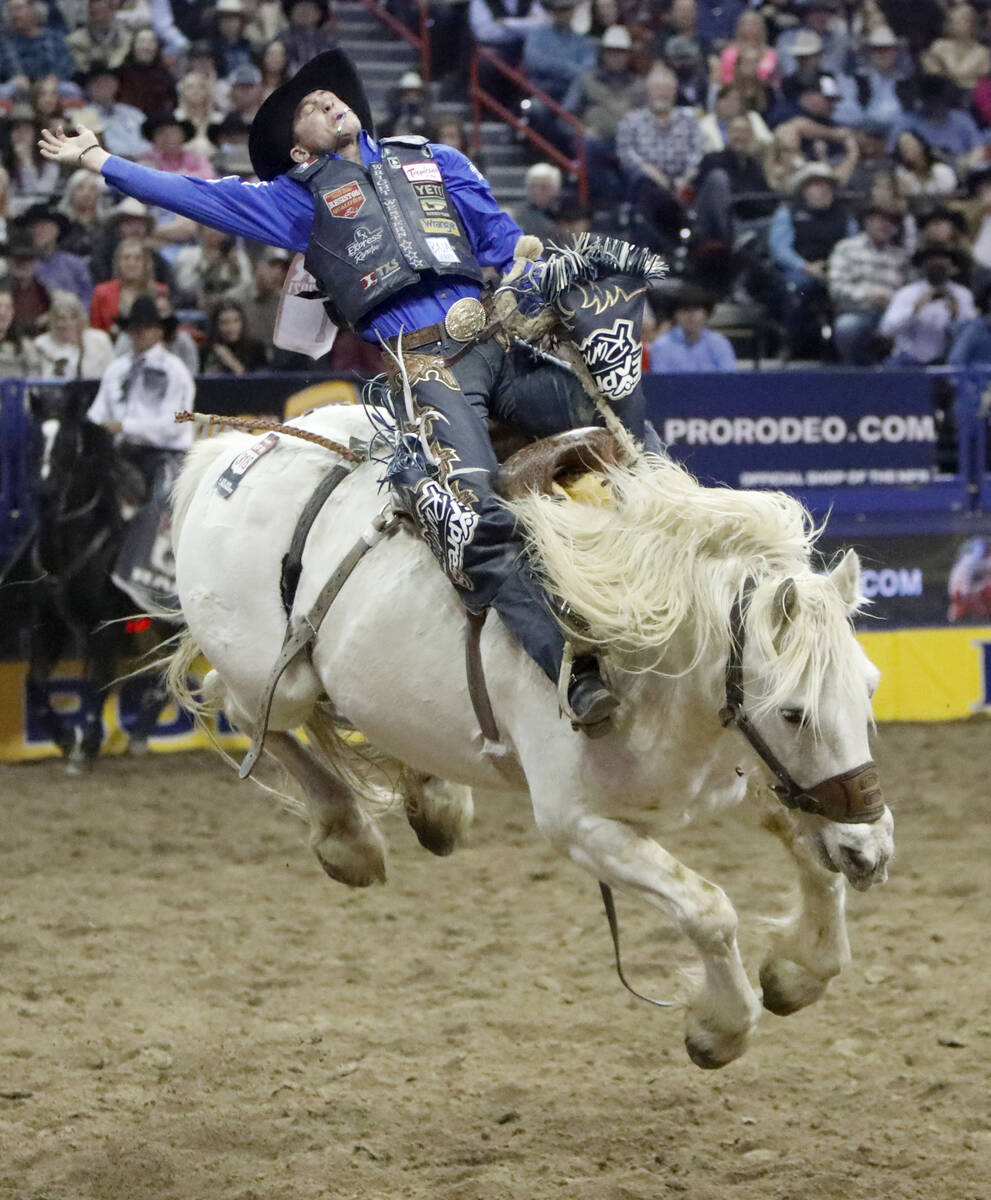 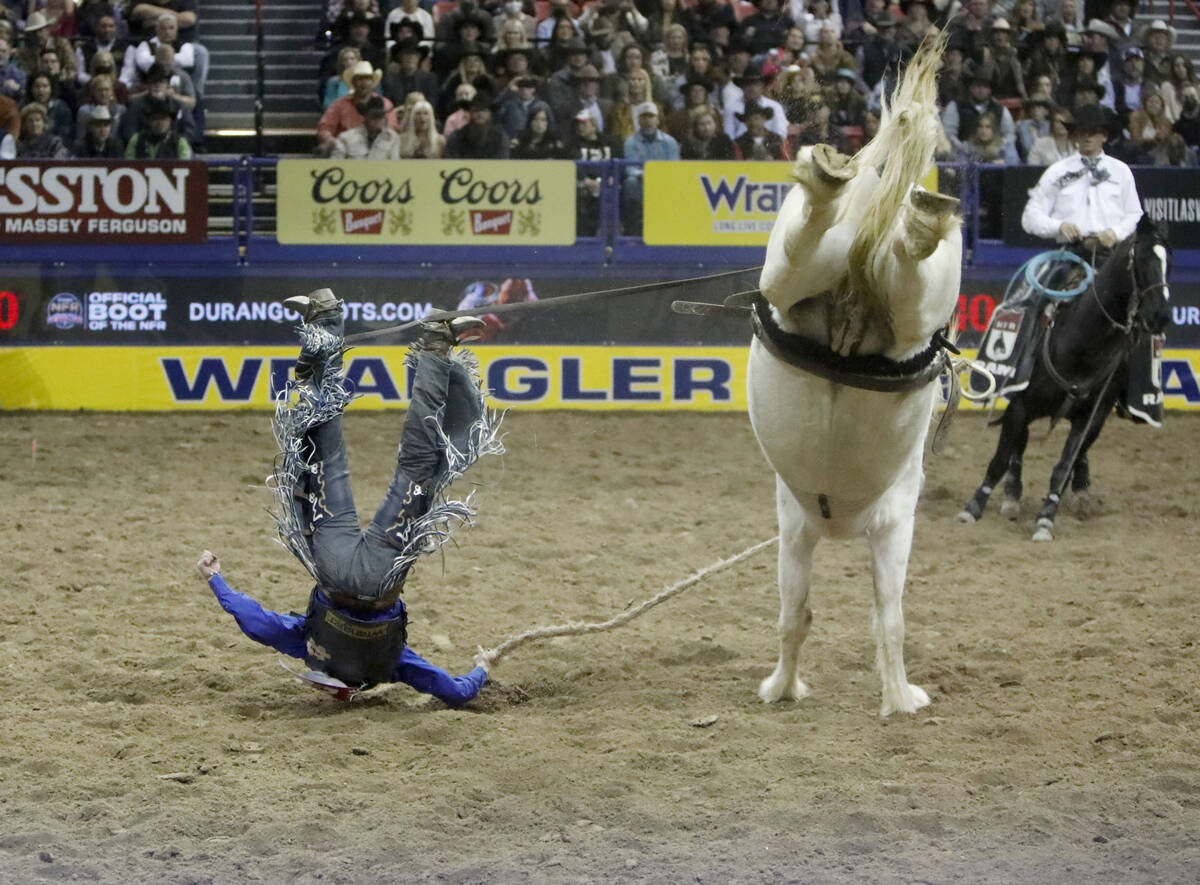 Stetson Dell Wright of Milford, Utah is thrown from his horse in the saddle bronc riding event during the seventh go-round of the National Finals Rodeo at the Thomas & Mack Center, Wednesday, Dec. 8, 2021, in Las Vegas. (Chitose Suzuki / Las Vegas Review-Journal) @chitosephoto 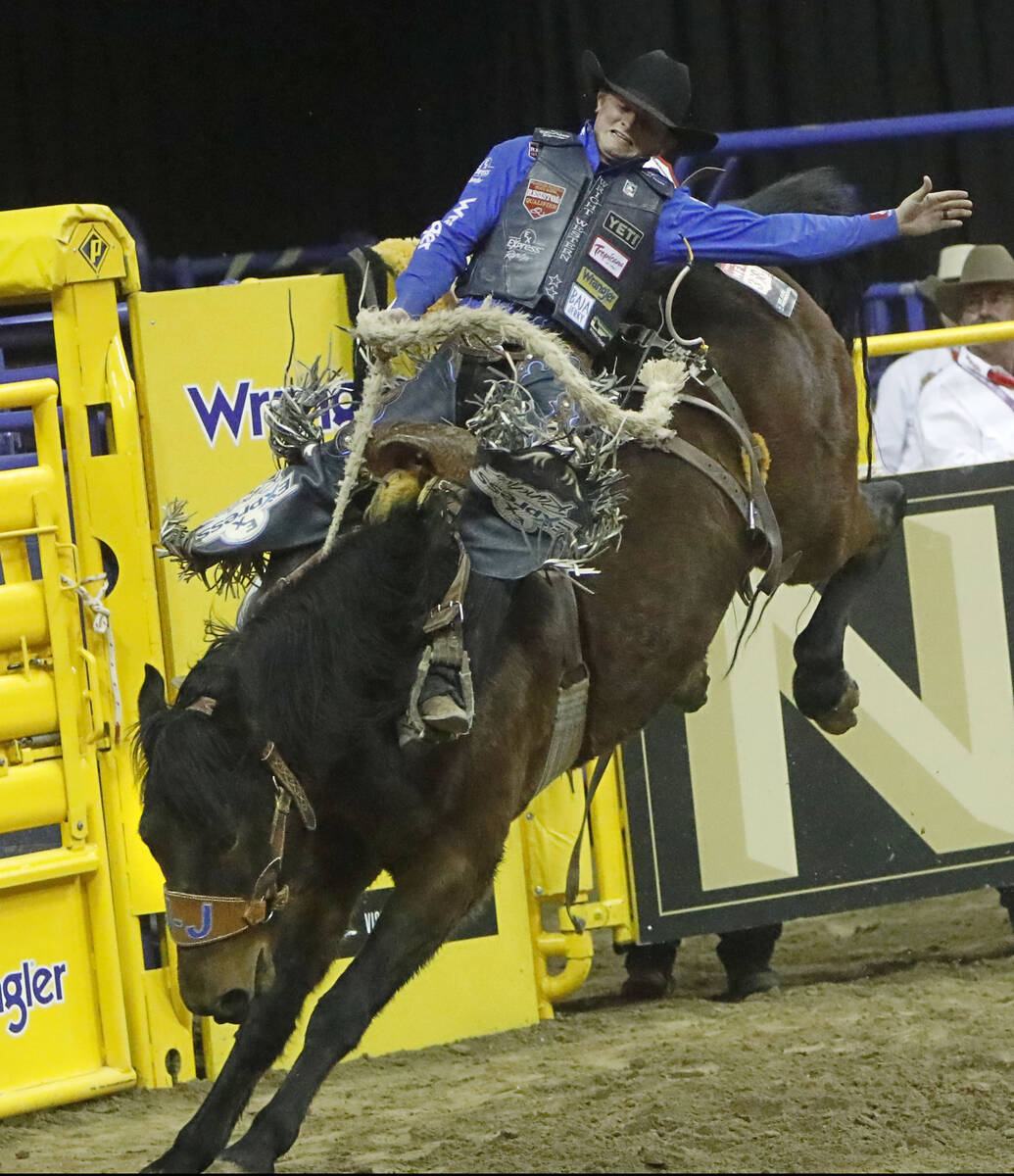 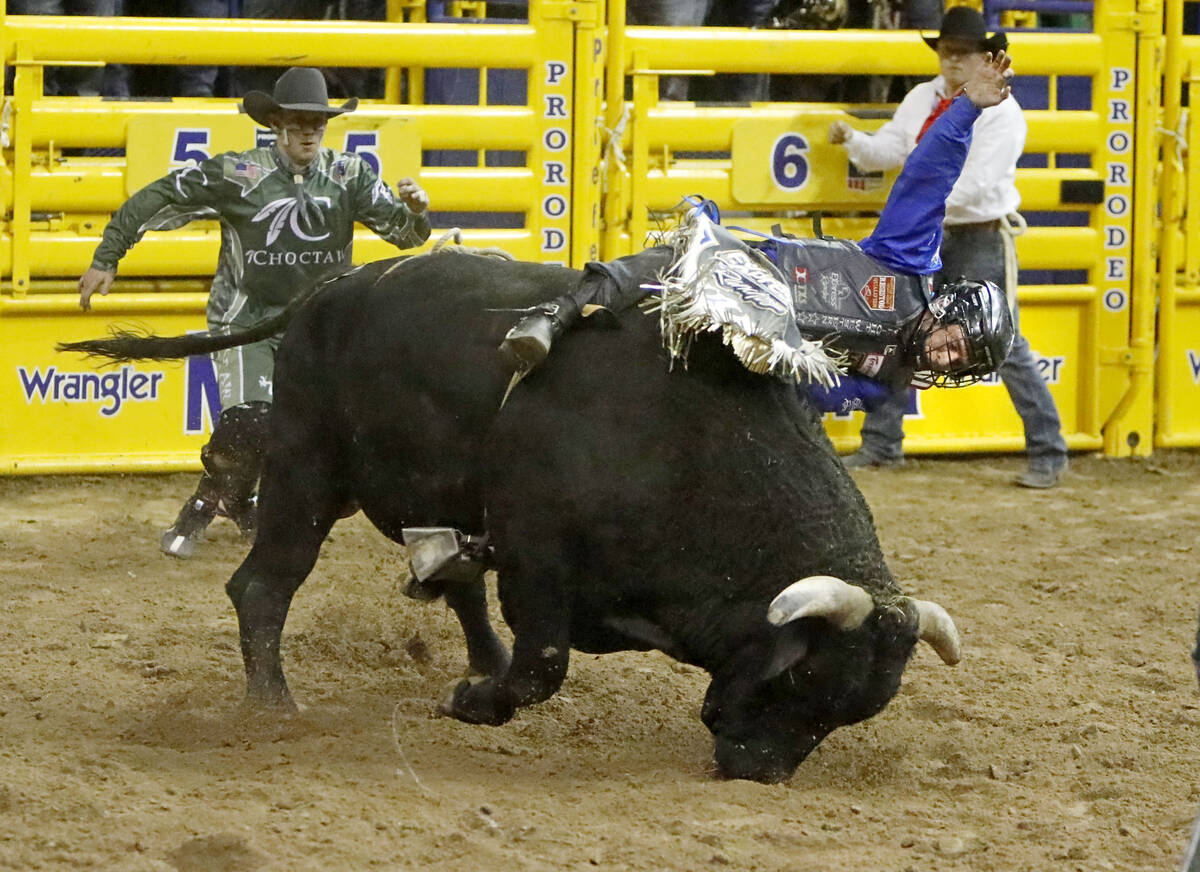 It is often referred to as rodeo’s classic event.

Of all the National Finals Rodeo disciplines, saddle bronc riding might have the most practical application when it comes to the western lifestyle. Were it not for a cowboy’s ability to break and train horses, he probably would have to depend on a pickup truck for transportation.

It also helps if you were raised an Etbauer or a Wright.

The Etbauer brothers of South Dakota (and later Oklahoma) dominated the event during the 1990s. Robert Etbauer won the world championship in 1990 and 1991, and middle brother Billy won it five times after that.

Kid brother Dan never earned the gold buckle, mostly because his siblings were standing in the way. And the brothers’ pal, Craig Latham, was to the Etbauers what keyboard player Billy Preston was to the Beatles. They called Latham “The Fourth Etbauer,” and he and the brothers combined for 52 NFR qualifications.

Robert and Billy Etbauer were elected to the ProRodeo Hall of Fame in 2012. In 2005, Billy even appeared as a guest on the “Late Show with David Letterman.”

Robert, Billy and Dan Etbauer were the first trio of brothers to qualify for the same NFR event — and they did it a record eight times.

Which brings us to the Wright Brothers. Not Orville and Wilbur, but the even higher-flying duo of Stetson and Ryder Wright. And their uncle, Spencer.

They are part of a rodeo dynasty that includes nine saddle bronc riders from the same family. When it comes to having an impact on Las Vegas, the Wrights have been compared to their fellow Utahans, Donny and Marie and the singing Osmonds.

Stetson is a virtual lock to capture his third consecutive world all-around cowboy title after winning Wednesday’s bull riding go-round. Ryder earned a fifth-place check Wednesday in saddle bronc riding and increased his championship lead over his brother to $8,828.

“We got the draw, and we were standing out in the parking lot, and I told them we were going to be one, two and three,” the 23-year-old said about edging Stetson, 22, and Spencer, 30.

Should one of the brothers claim the title, it would be the seventh saddle bronc crown earned by the Wrights and equal the Etbauers’ total — Ryder and father Cody Wright each has two and Spencer and Jesse (Cody’s brothers) one apiece.

While it’s hard to keep them all straight, one thing is certain: When it comes to saddle bronc riding and the NFR, you can count on a whole lot of the Wright stuff.

As Stetson said before he and his other namesakes saddled up in Las Vegas: “Pretty much every single saddle bronc rider is in those chutes by themselves. But we’re not. We’ve got like a family reunion down there, and that’s the way we’d like to keep it.”