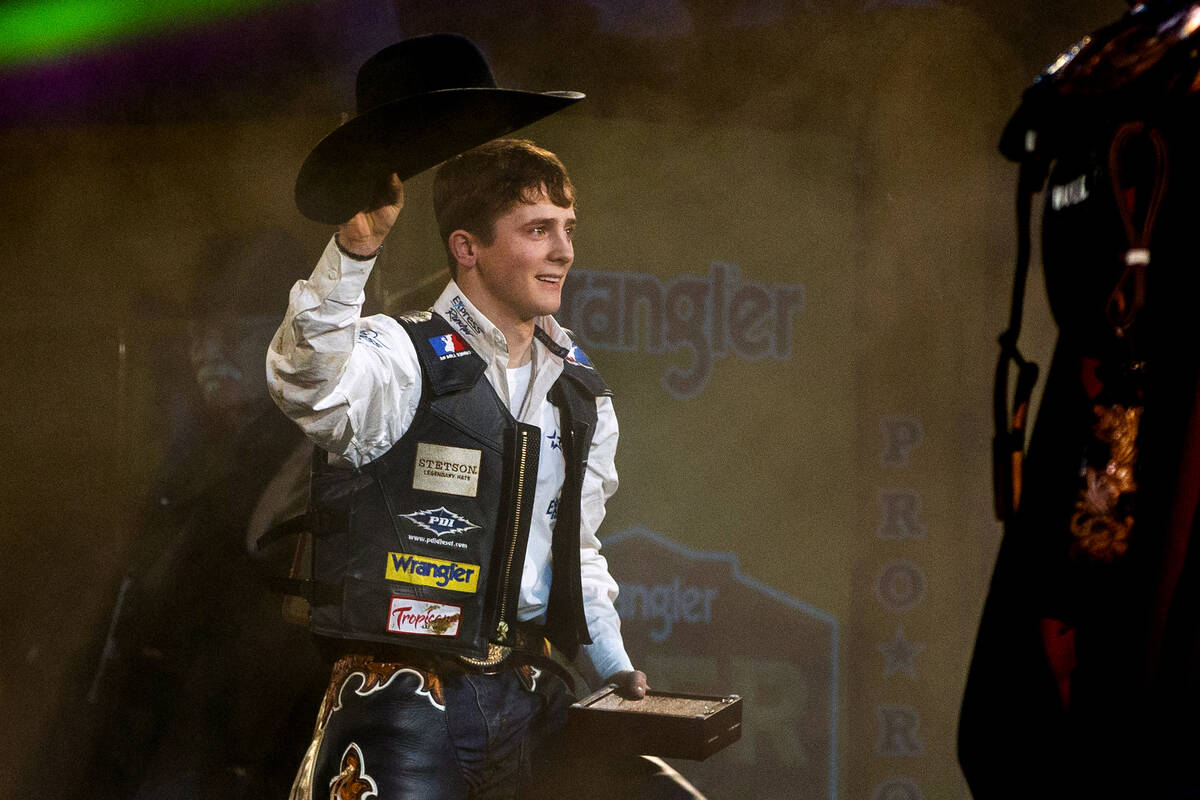 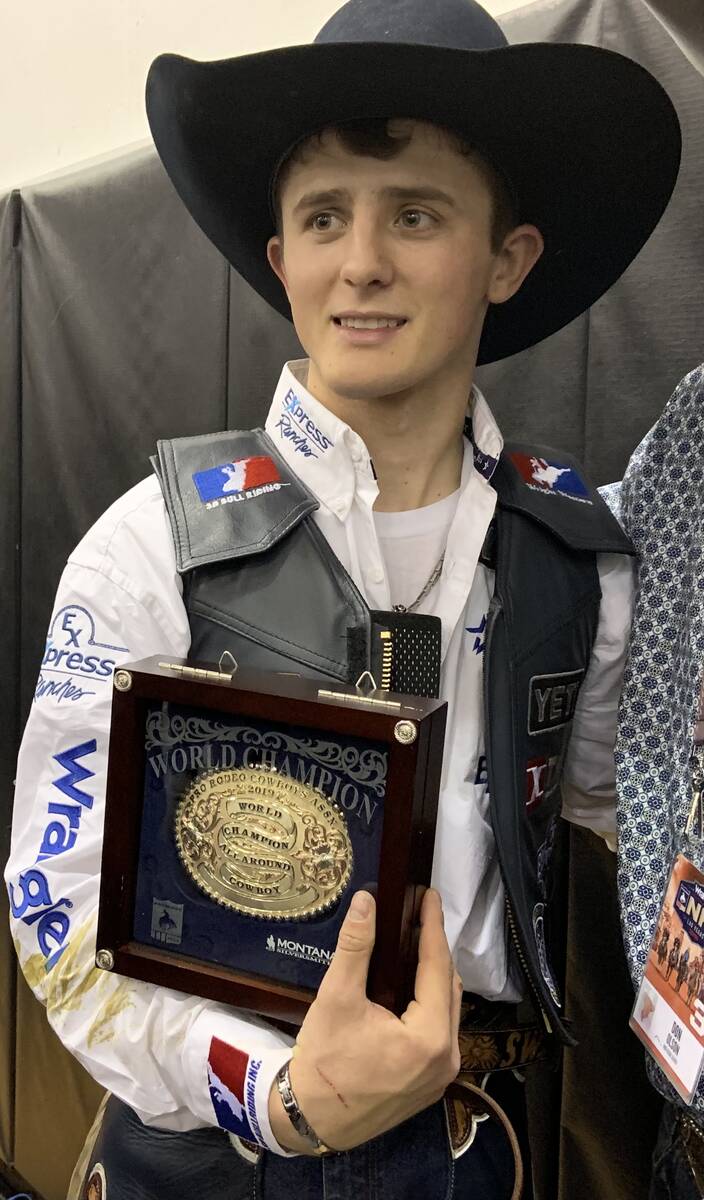 Stetson Wright displays his first all-around world champion gold buckle, at the 2019 Wrangler National Finals Rodeo. In 2020, Wright claimed his second all-around crown and won the bull riding gold buckle, too. Over the next 10 days, he's aiming to clinch a third straight all-around championship and could add titles in saddle broncs and bull riding. Photo by Patrick Everson/Special to the Review-Journal 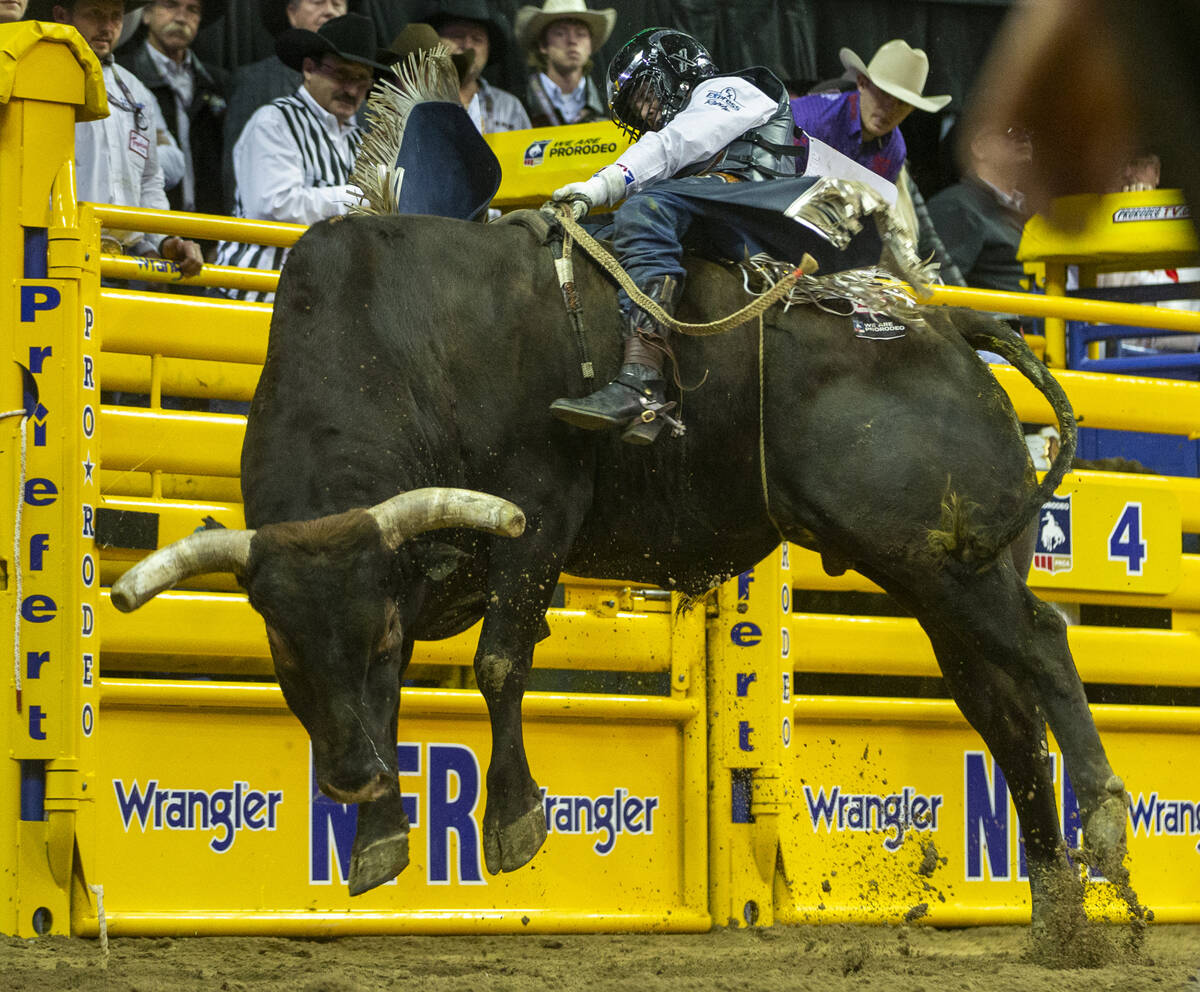 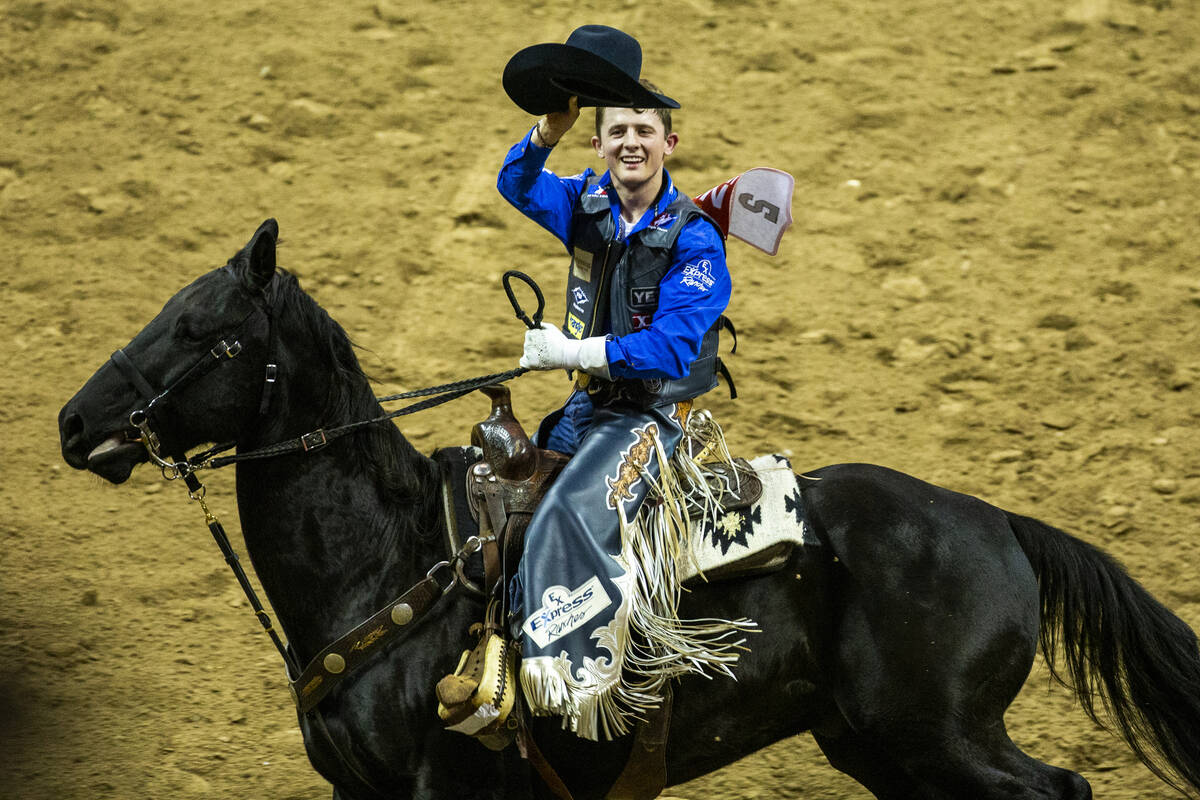 Stetson Wright of Milford, Utah, salutes the crowd after taking first place atop of Holy Holly for a score of 91.0 points in Bull Riding during the fourth go round of the Wrangler National Finals Rodeo at the Thomas & Mack Center on Sunday, Dec. 8, 2019, in Las Vegas. (L.E. Baskow/Las Vegas Review-Journal) @Left_Eye_Images 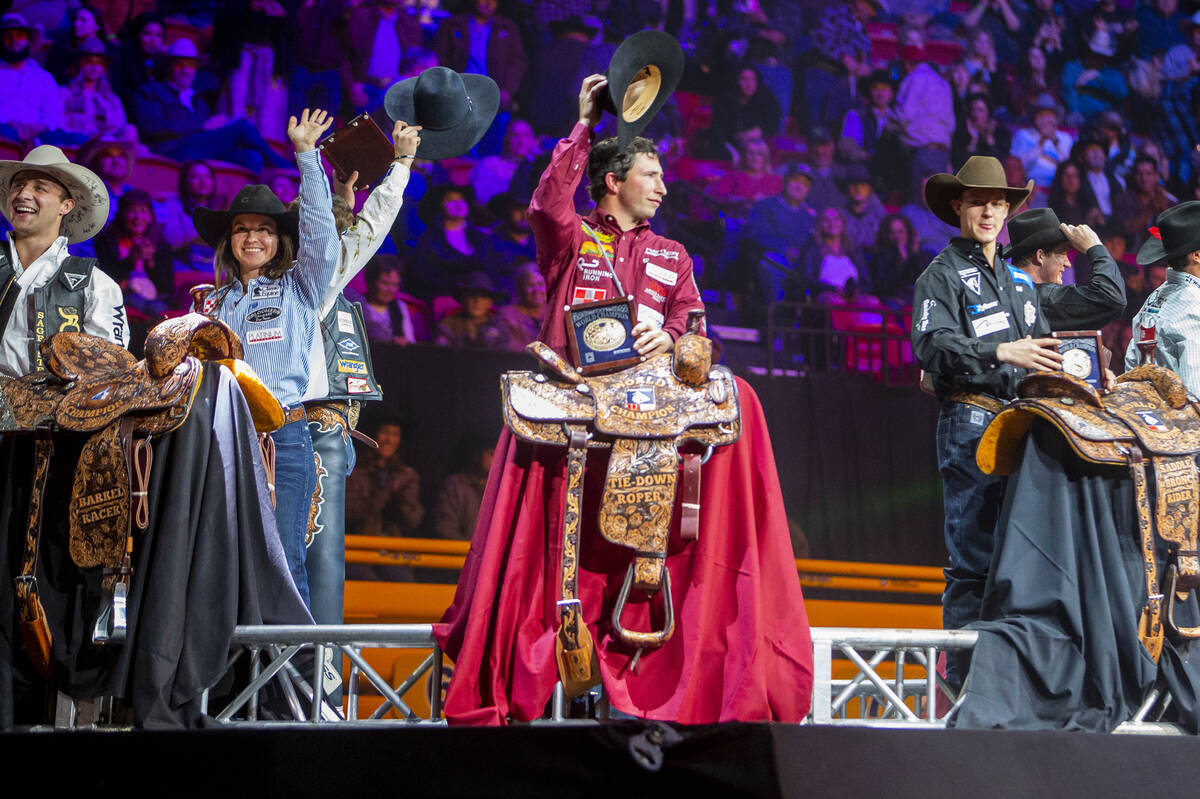 Stetson Wright is about to embark on his just his third Wrangler National Finals Rodeo. But the 22-year-old from Milford, Utah, already has a resume that cowboys 10 or 20 years older could only dream of, and it’s pretty apparent that resume is heading for an update.

For the second straight year, Wright qualified for the Wrangler NFR in two events, saddle broncs and bull riding, after only making it in bull riding in 2019. He’s the two-time all-around world champion cowboy and the reigning bull riding world champ.

Wright comes into Vegas with a whopping 2021 regular-season total of $320,482 in all-around earnings, which puts him in first place by a country mile — $185,000 clear of second-place Paden Bray. Wright has cleared $181,894 in saddle broncs this year, again first place, though that’s only about $11,000 ahead of 2020 world champ and older brother Ryder Wright.

A third straight all-around title seems a foregone conclusion, but Wright is leaving nothing to chance over these next 10 days.

“My mindset stays the same as all year. I’m gonna do what got me this big lead, what got me to my third consecutive NFR,” Wright said. “Stick to the basics, and then blow everyone out of the water.”

Qualifying for the NFR in two events — which doesn’t happen often, but obviously greatly enhances one’s chances to make a lot of money in this very lucrative rodeo — helps a great deal in the all-around, as Wright noted, based on his 2020 NFR exploits.

“This has been a progression, I guess you could say. Last year, I won four go-rounds in bulls and two in saddle broncs. I got more confident that I could compete with my brothers (in saddle broncs) and with all the other good riders.”

Ah, yes, his brothers. Wright hails from the First Family of Saddle Broncs. His dad Cody is a two-time world champ, Ryder has two gold buckles, and uncles Jesse and Spencer are also past saddle bronc world champs. Wright was disappointed in 2019, when he only reached the NFR in bull riding and therefore couldn’t compete in the family business that week.

That was rectified in 2020, when he qualified in saddle broncs and finished seventh in the world standings. But Wright really found his form in both events this season, racking up oodles of wins and prize money in each.

“It used to be that I thought I could do great. Now, I know I’m gonna do good. For a while, I was just hoping. But then it just got to the point where I knew I was gonna win,” Wright said. “It all comes with consistency. In 2019, I made some of the best bronc rides I’ve ever made, still to this day. In 2020, same thing, and the same thing with my bull riding.

“But it was just getting that consistency and confidence. This year, if I showed up, I for sure thought I could win, and nobody could tell me otherwise.”

Don’t confuse that confidence with cockiness, though. Wright is quick to defer to the support system around him in a family full of rodeo cowboys, especially when talking about breaking the mold by getting the Wright family’s first bull riding gold buckle.

“Ah shoot, it means everything. Ever since me, Rusty, Ryder and (younger brother) Statler were little, we wanted to be world champion saddle bronc riders,” Wright said. “But all of us wanted to win a bull riding title, too. I felt like that bull riding world title was really an accomplishment for all of us.”

And it’s not just his competitive brothers who get credit.

“Everybody in my family, especially my dad and brothers, my mom and my sister, I wouldn’t be here today without them. I’ve got an awesome support system,” Wright said. “My dad taught me everything from bronc riding to bull riding. And my brothers have kept me sharp going down the road. Like they say, iron sharpens iron.”

Wright will certainly have to be sharp to get his first saddle bronc gold buckle, with Ryder right on his heels. And uncle Spencer is also in the saddle bronc field, qualifying in the 15th and final slot. While there is a little family rivalry, Wright said it’s an advantage for his family to regularly field 20 percent or more of the saddle bronc field.

“It’s awesome. Pretty much every single saddle bronc rider is in those chutes by themselves. But we’re not. We’ve got like a family reunion down there, and that’s the way we’d like to keep it,” he said.

This time, Wright wants to walk away from this 10-day spectacle with the saddle bronc, bull riding and all-around world titles.

“That’s the ultimate goal. But before that, my goal is to ride all 10 broncs and all 10 bulls,” he said. “If I do that, I think I’ll walk out with all three gold buckles. And I won’t be satisfied unless I do.”