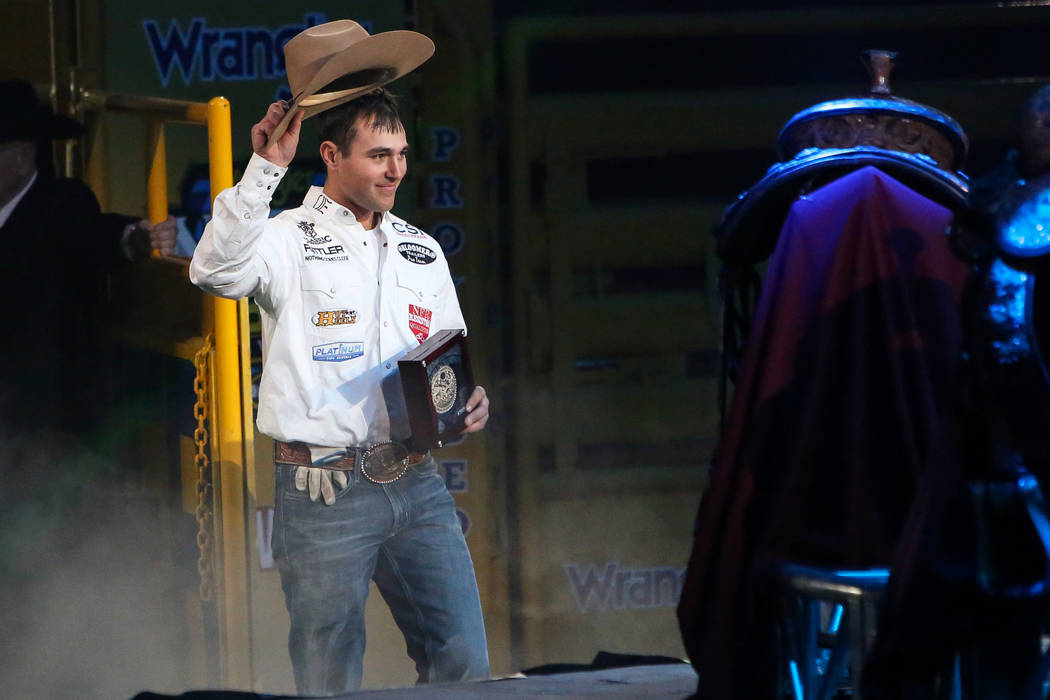 Clay Smith of Broken Bow, Okla. (22) walks up to be honored on stage after winning the Team Roping category during the tenth go-round of the National Finals Rodeo at the Thomas & Mack Center in Las Vegas, Saturday, Dec. 15, 2018. Caroline Brehman/Las Vegas Review-Journal

As Thanksgiving Day approached, defending world champion team roper Clay Smith certainly had much to be grateful for from the past 12 months. Smith, a header, teamed with heeler Paul Eaves to clinch that 2018 world title with a rock-solid Wrangler National Finals Rodeo, as each earned nearly $175,000 over those 10 days.

This season, Smith has had three different roping partners, but he’s gotten similar results. Since June, he’s teamed up with Jade Corkill, who helped Smith head into the Wrangler NFR not only leading the world header standings, but having set a regular-season header record with $150,512 in earnings.

“It’s been a good rodeo season. Obviously, you want to win as much as you can,” Smith said. “It sure helps to be a little bit in the lead, but it doesn’t matter, because of how much you can win in Las Vegas. Your position could change every night. There’s not enough money a guy can win throughout the year to then not do good at the NFR. It’s hard to get a big enough lead.

“The NFR pays so good that it makes your next year. We’re hoping for a good NFR.”

Well, so far, it’s been good. Not necessarily great, because a no-time in the third go-round almost certainly took the duo out of the lucrative average, which could prove extremely important by week’s end. But Smith and Corkill won the second go-round, split fourth in the fourth go and split second on the fifth night.

That’s helped Smith bolster his season earnings to $213,820, nearly $50,000 clear of second-place Chad Masters. In a season of rotating roping mates, that says a lot about Smith’s consistency, and not just with the physical aspect of roping.

“The thing that’s working better this year is probably the mental game. It gets better the more you do this,” Smith said. “In roping, you’ll have good days and bad days. You have to figure out how to not let it carry over at the end of a bad day.

In rodeo, there’s no time for resting on laurels, either. Smith has qualified for the Wrangler NFR five times — each of the past five years — but the 28-year-old Broken Bow, Oklahoma, resident knows you’re only as good as your next rodeo, your next season. There’s not much time to celebrate world championships.

“As soon as the NFR is over, it’s already started up for the next year. Nobody remembers you. You still have to do your job,” Smith said in describing his season as the reigning champ. “I wouldn’t say it’s easier. It just gives you a little bit of confidence to know you can do that.”

Smith added that while he and Corkill are battling 14 other teams this week — the best team ropers in the world, all wanting a piece of what he’s got — it’s important to remember who your real competition is each night.

“In our sport, you’re competing against your animal. If you start looking at who you’re trying to beat, then you’re looking at the wrong thing,” he said. “Just do the best job you can on each head of livestock.”

That’s even more the point of emphasis after the no-time on Night 3. The winner of the 10-day NFR average pockets an additional $67,269, which can help make up an awful lot of ground in the chase for the gold buckle awarded to the world champion. So for Smith to get his second title — and Corkill to perhaps get his fourth, though the heeler chase is much tighter — the two have to win as much go-round cash as possible.

“You’ve gotta be the high money winner of the week,” Smith said. “Everybody ropes so good here. We’re gonna have to do our job each night. You don’t have to win first, but I do feel like we need to cash every night. Catch ‘em as fast as we can and see what happens.”

Regardless of how it ends up, though, Smith will again soak up all the pageantry of the Wrangler NFR and look forward to a return trip.

“I love every bit of it, from the Grand Entry on,” Smith said of each evening at the Thomas &Mack Center. “You can enjoy all of it and take it in before you rope, and then when you get in the box, you have to block that all out. But it still gives me chill bumps every time I ride in there.”