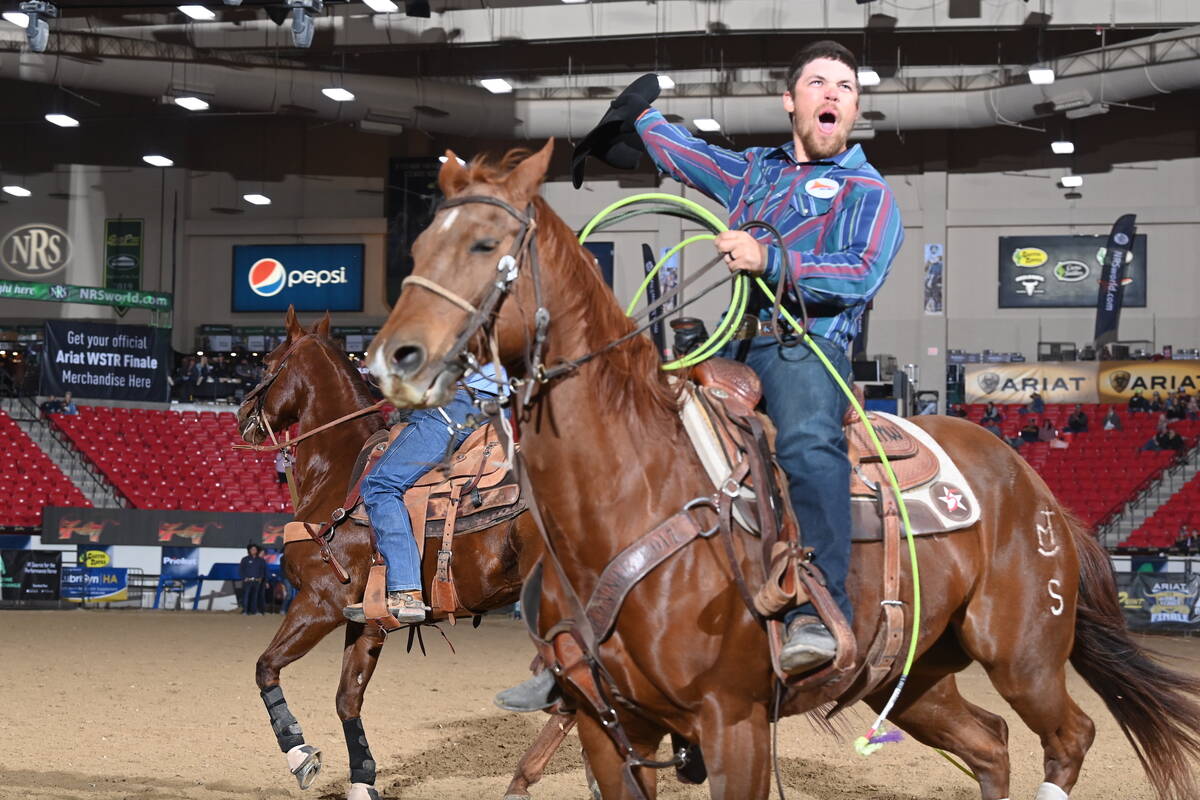 Heeler Shane McCall, after he and header Copie Dickson won the 12.5 division in the World Series of Team Roping at the South Point Arena. (CBarC Photography) 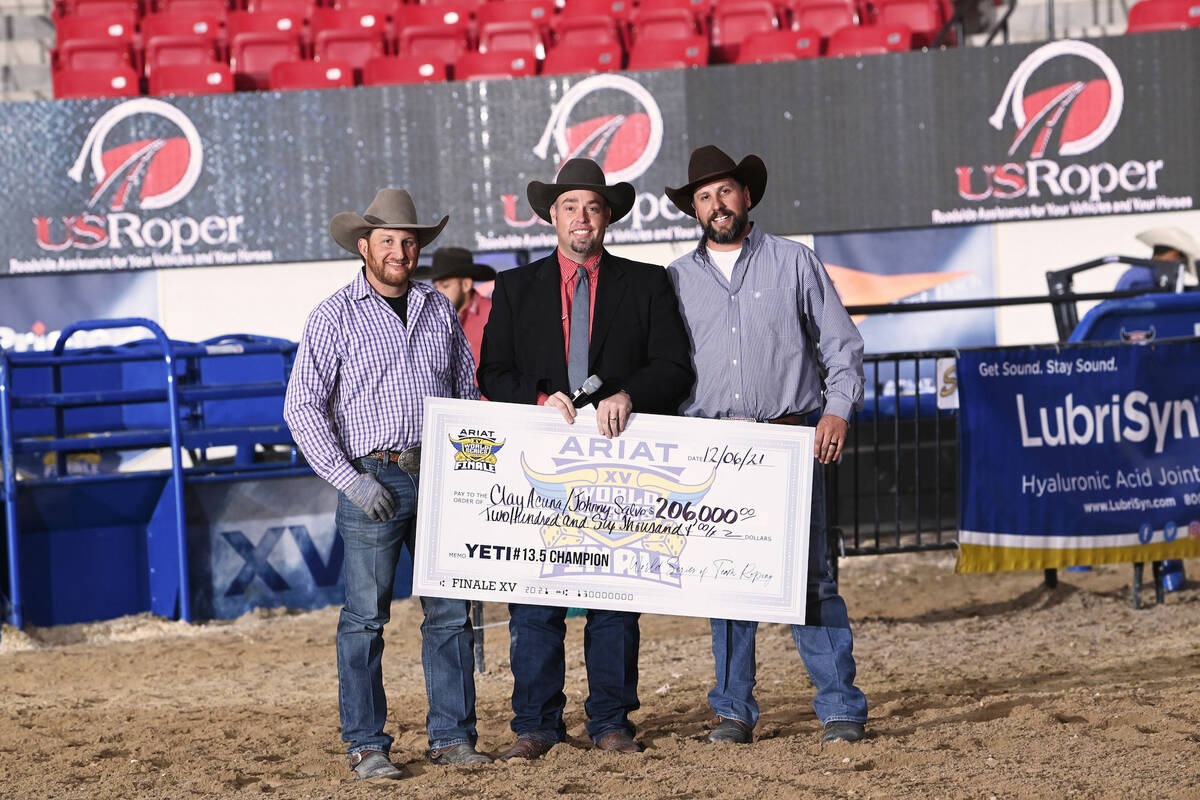 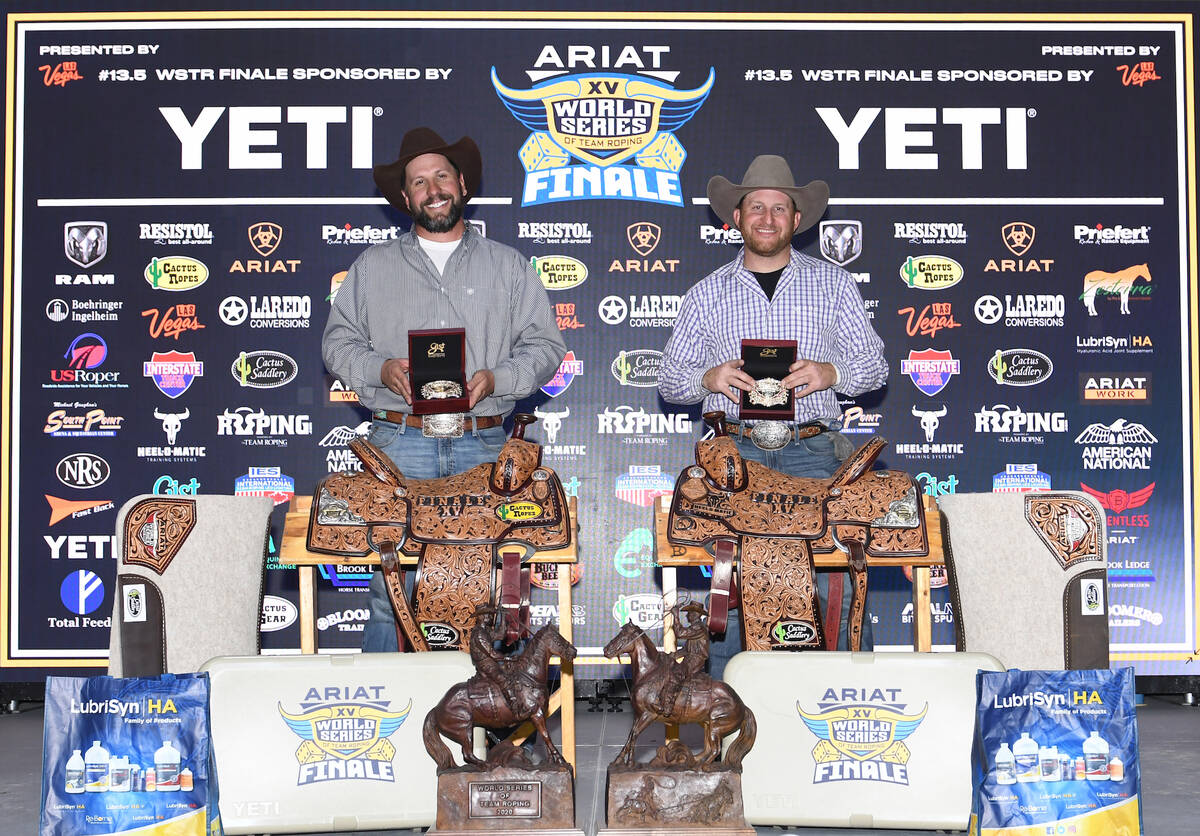 From left, header Clay Acuna and heeler Johnny Salvo display the buckles and saddles they earned by winning the 13.5 division in the World Series of Team Roping at the South Point Arena. (CBarC Photography)

Everybody remembers how, a year ago, the Wrangler National Finals wasn’t contested in Las Vegas because of the pandemic. The 2020 Wrangler NFR was instead contested in Texas.

What’s forgotten is that another major rodeo event — one that has 30 times more contestants in Las Vegas — was canceled altogether. It was a wicked blow for the World Series of Team Roping, which runs concurrent to the NFR.

“It was shut down right at the end of November. It was tough. We’d put in a whole year’s worth of work.” World Series of Team Roping senior vice president Connie Gentry said.

Even this year, with the team roping tournament back at the South Point Arena, there was considerable uncertainty. But if you want proof that Las Vegas and rodeo are back, the World Series of Team Roping provided it.

“This year, we were very concerned that numbers might be down due to (Nevada’s) mask mandate,” Gentry said. “But 2019 was a record-breaker, and this one’s gonna match it.”

There are 3,800 contestants in town for this massive event, which caters much more to recreational ropers than the professional loopers. Total prize money for the week is $13.7 million.

“It’s been fabulous. A lot of people thought we’d be down 15 to 20 percent across the board. So I think everybody within the organization is ecstatic about it,” Gentry said.

For certain, the prize-winning ropers are over the moon. Again, this is an event comprised of thousands of team ropers who are often weekend-warrior types, with full-time jobs and families and the like. Header Clay Acuna and his roping partner, heeler Johnny Salvo, won the 13.5 title — the third-highest of eight levels at the World Series — to collect a $206,000 check.

“We grew up together, and we’ve run a million steers together,” Acuna said of his partnership with Salvo, cemented by a payday they could’ve never imagined. “I’ve never backed into the box for that much money in my life. I’ve got a 2-year-old and wife who’s pregnant at home. Christmas is coming. It couldn’t have come at a better time for us. It’s life-changing money.”

Indeed, it’s often said that team roping is the richest recreational sport in the world. And the World Series of Team Roping is the top of the mountain for these contestants.

“We added the Open Division in 2019 for the pros, but the World Series is a recreational organization, with all these different levels of competition,” Gentry said. “That’s been the mission of the World Series. We want people to be competitive from cradle to grave. That’s why almost every year, you’ll get someone who’s a legend, like 82 years old, who wins $90,000 or $100,000. It’s available to everyone, not just the highly talented.”

Acuna, whose day job is as an oil field worker, won’t argue with that.

“I live in Stephenville, Texas, which is considered the cowboy capital of the world,” he said, tipping his Resistol to the professional rodeo cowboys who give up so much to make a living in this sport. “I can’t get close to being in the same arena with those guys. They work so hard and sacrifice so much. But this still gives me the ability to be active and rope, and somewhat live the lifestyle, but not have to sacrifice time with my family to do it.

And even in the wake of the pandemic, a lot of contestants came to Las Vegas for that fun and the shot at a few dollars — or a lot of dollars, as is often the case. As Gentry noted, the World Series of Team Roping is in the midst of a record-setting run, though a lot of people indeed opted out because of COVID restrictions.

“Otherwise, it would’ve been even larger than 2019,” Gentry said, while applauding those who showed up, riders and fans alike. “With all the uncertainty that’s come from the pandemic, to see all these people back here having fun and enjoying the sport, that’s the message for all of us. We all have to figure out if we’re gonna stay home and hide, or come out and adjust and live with it.

“There’s been a huge psychological change in the last 24 months, from fear to acceptance to ultimately where we’re all coming around to now, which is let’s live!”