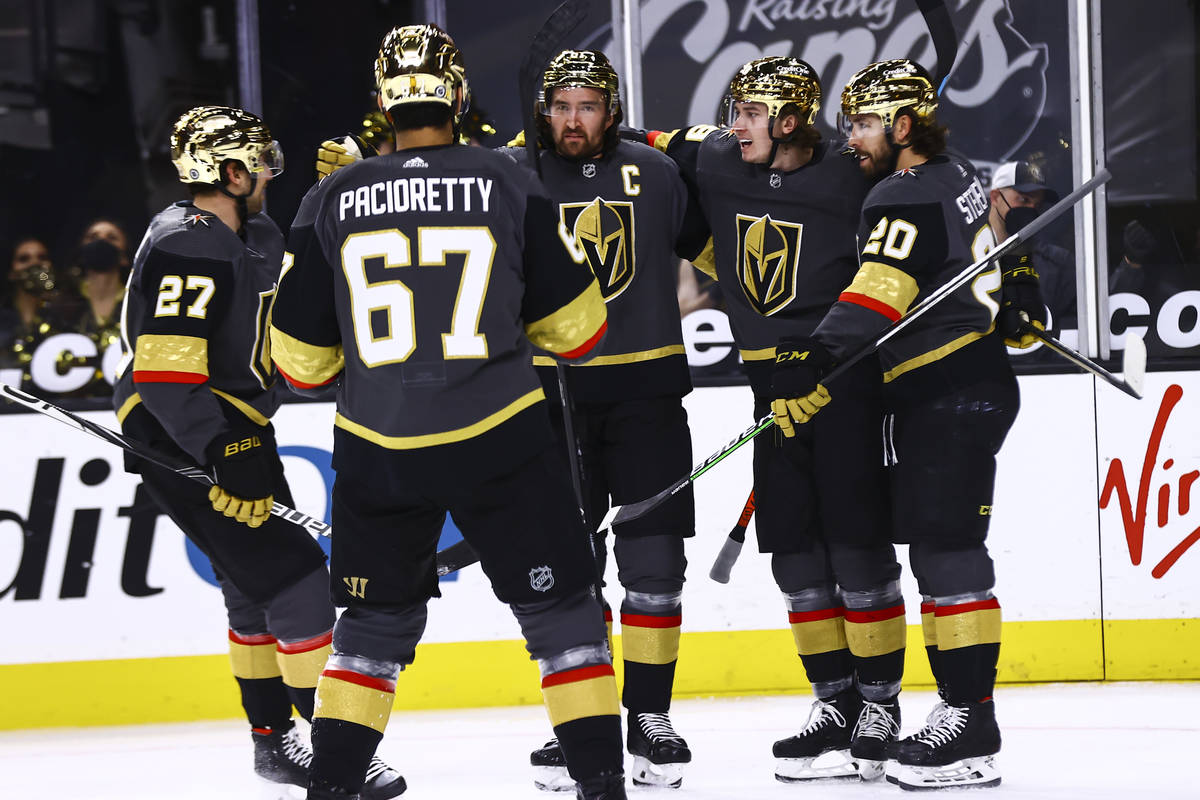 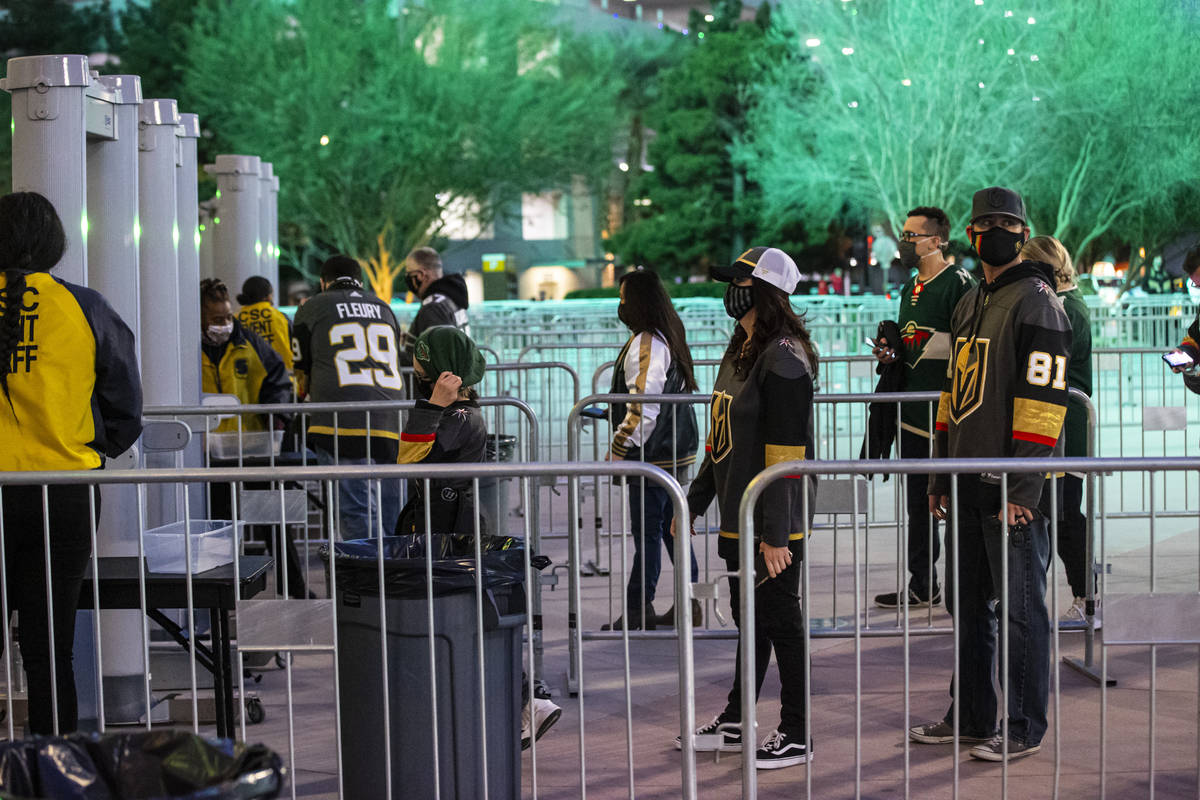 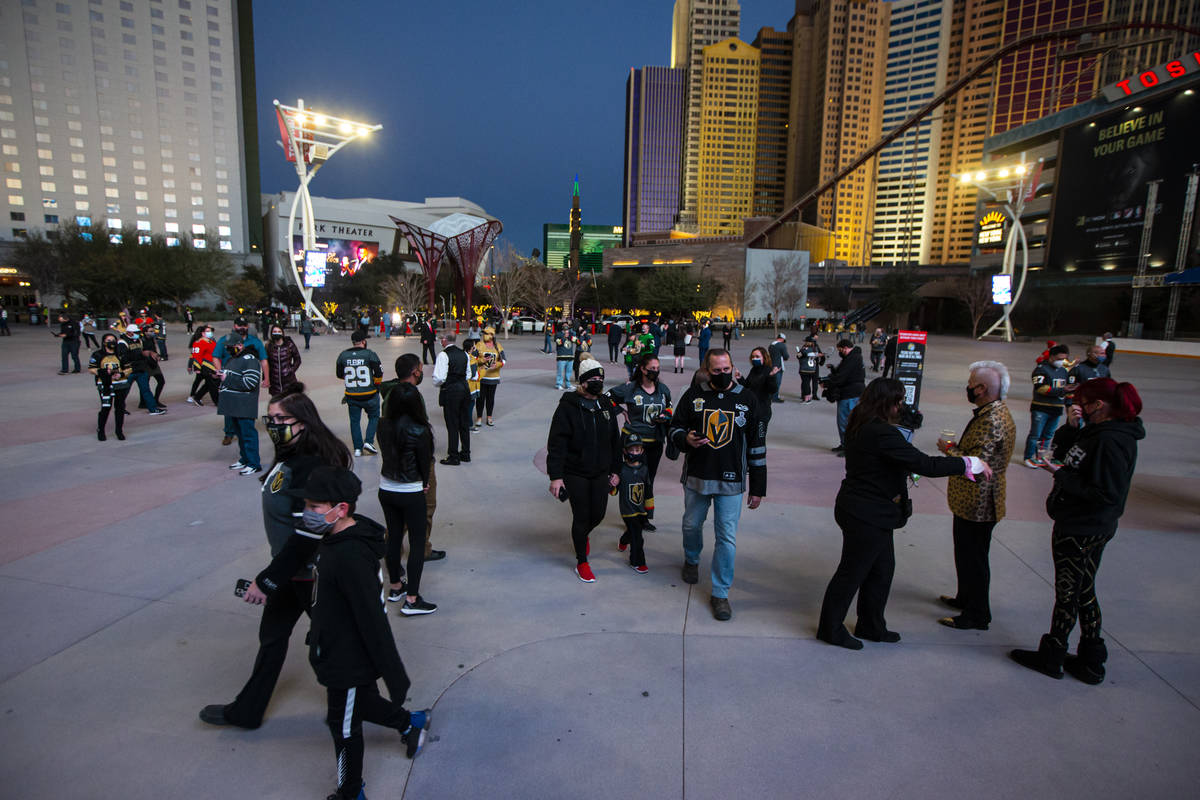 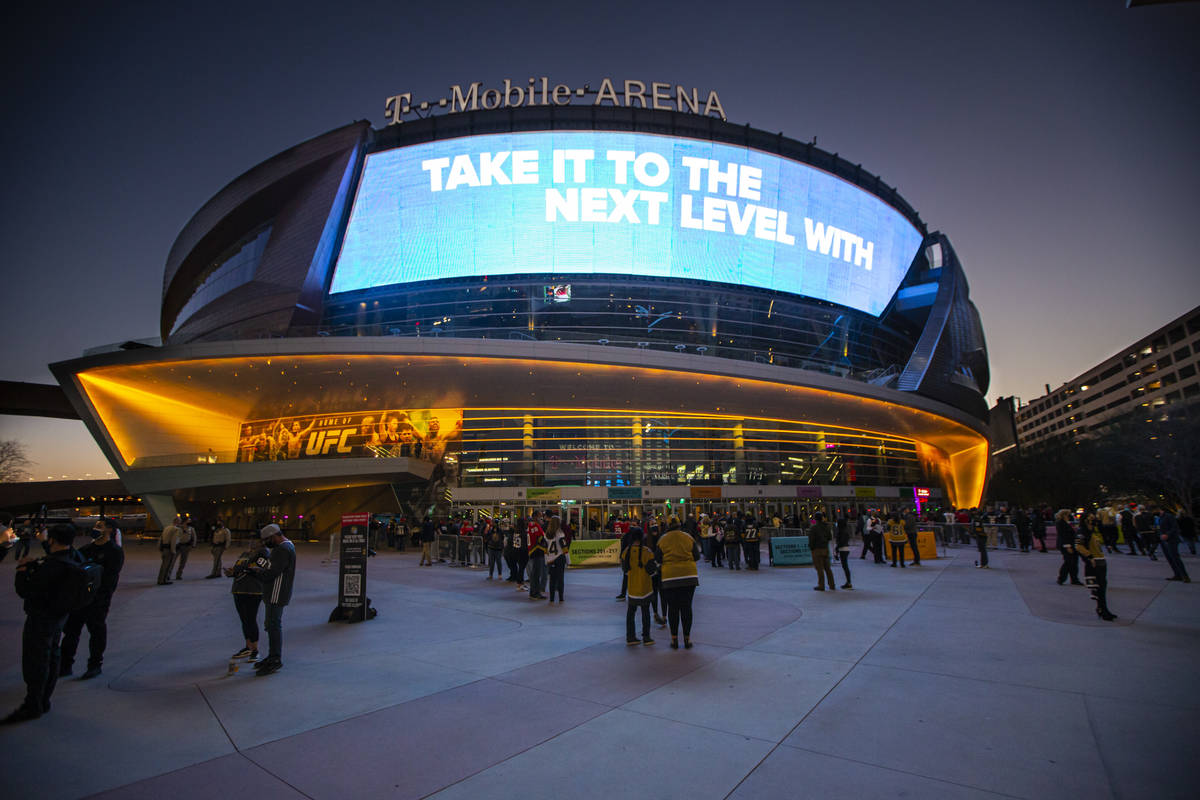 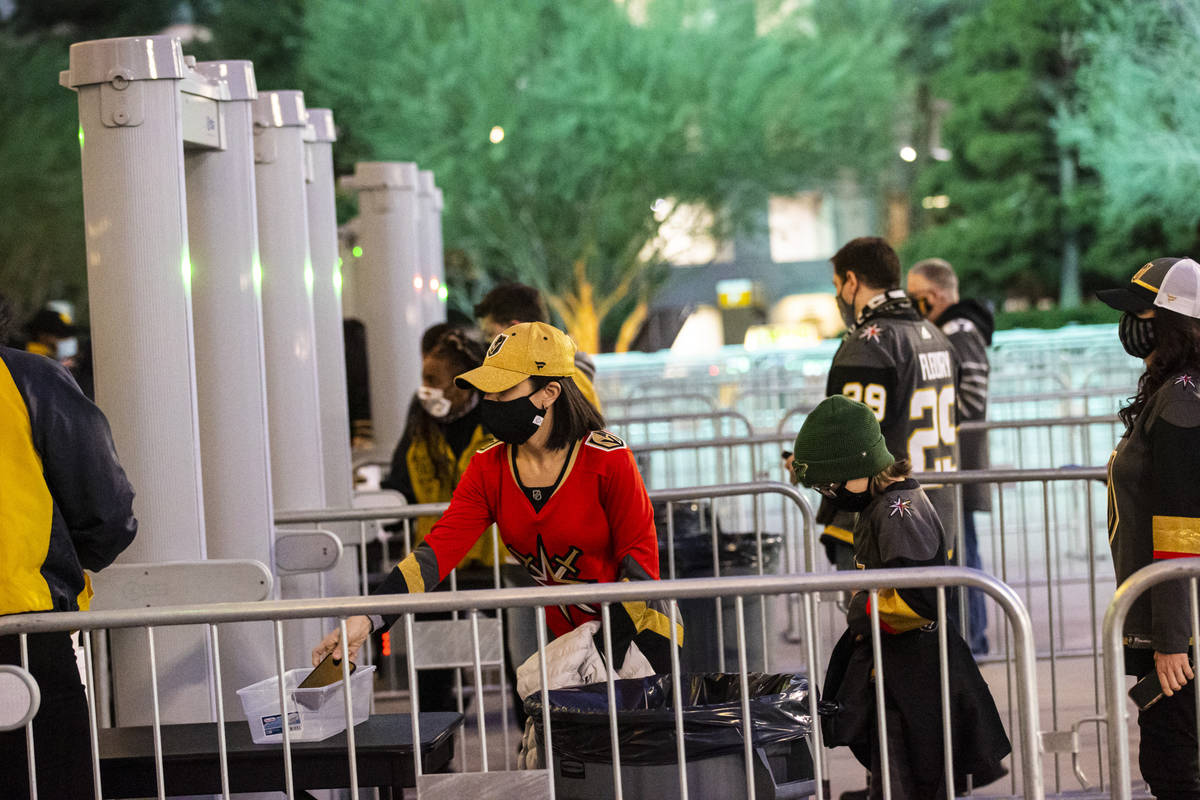 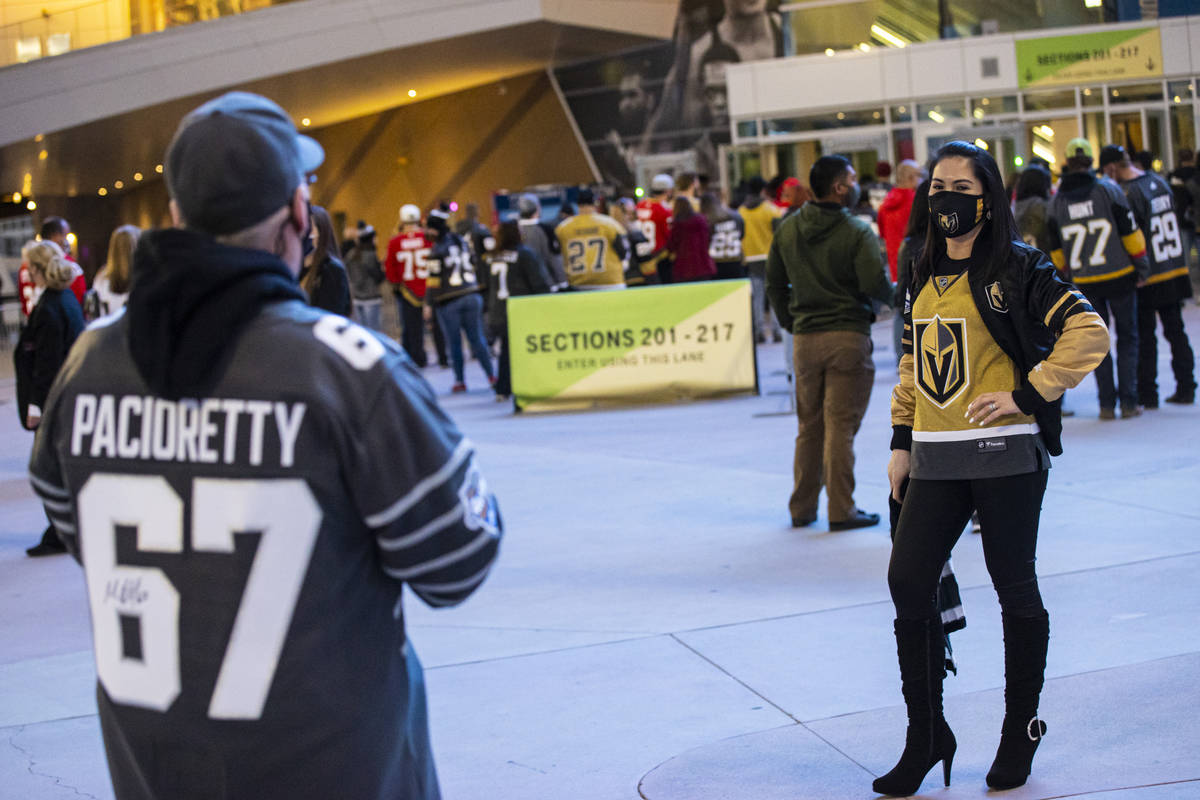 Gladys Peltzer, of Las Vegas, poses for a photo as fans arrive for the first Golden Knights game with fans allowed to return since the start of the pandemic at T-Mobile Arena in Las Vegas on Monday, March 1, 2021. (Chase Stevens/Las Vegas Review-Journal) @csstevensphoto 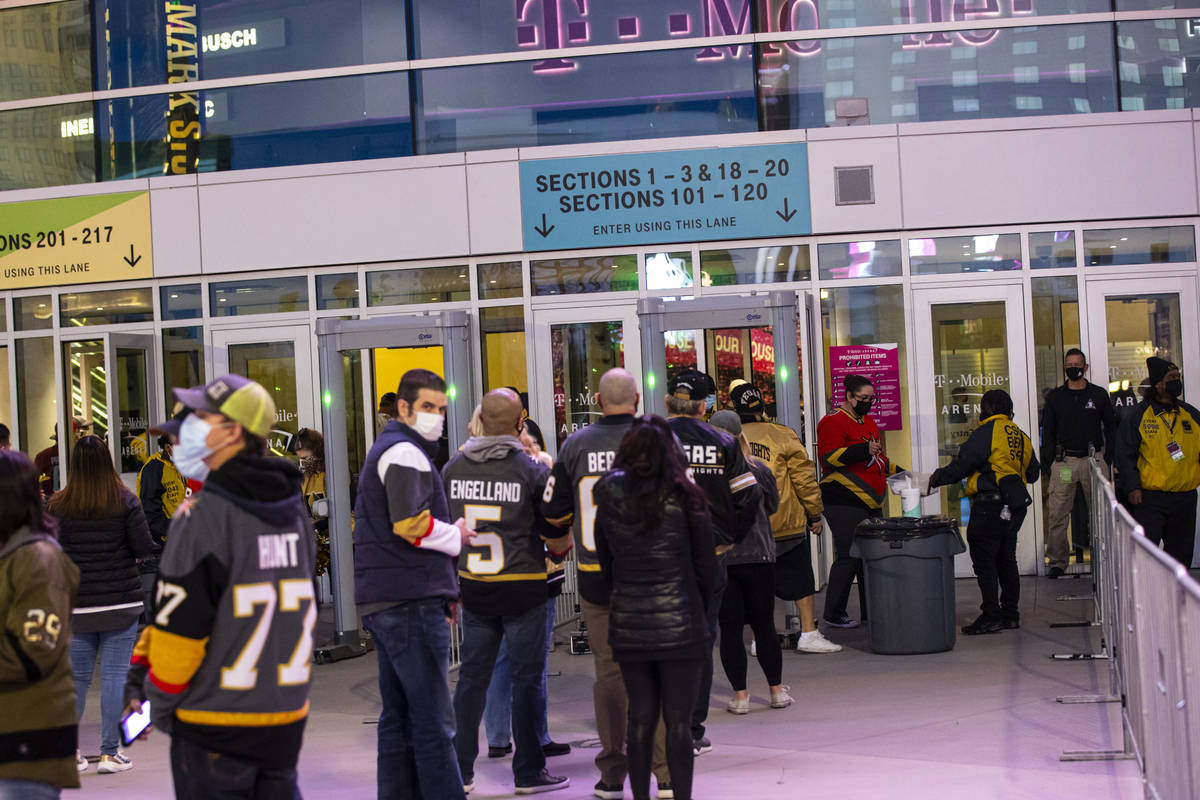 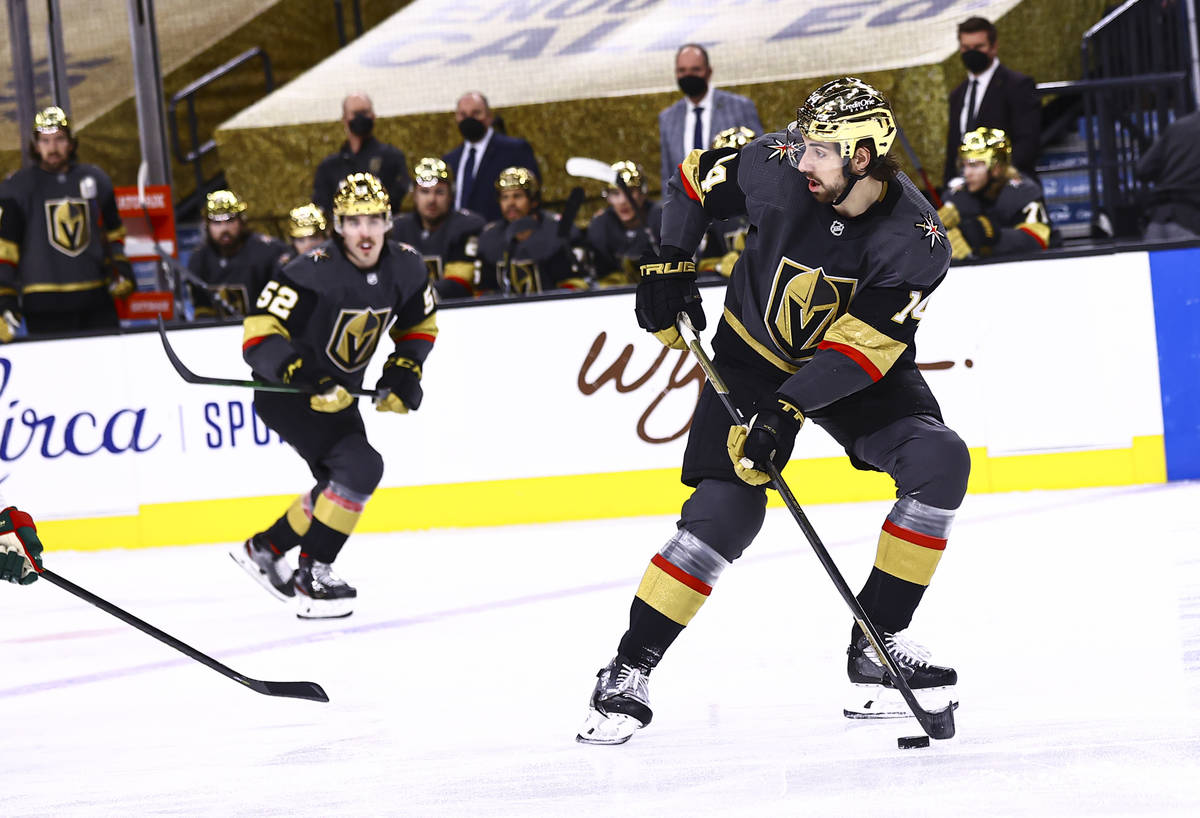 There haven’t been many of the latter over four years.

But before reviewing the most foolish of sponsorship deals — a sketchy tout service heard ’round the world — nothing hints at a return to normalcy like fans in T-Mobile Arena.

They were there Monday night, a maximum of 2,600 allowed for a game against Minnesota, not as many cheering bodies as the organization would have preferred but a beginning just the same.

Two days short of a year, one of hockey’s most passionate fan bases again had a voice inside the walls of T-Mobile. And they were in a typical oh-so-loud mood.

Except, of course, when the Wild scored four second-period goals …

“This is what we play for, to entertain,” Knights coach Pete DeBoer said. “Without the fans, just watching us go up and down a television screen, it isn’t the same thing.”

Islanders coach Barry Trotz said it best recently when talking about the return of fans to NHL arenas, that there is something about the human spirit you can’t replicate. The joy, the anger, the fellowship, the buzz.

Certainly not with piped-in crowd noise and manufactured excitement and virtual high-fives.

Knights players took the ice for warmups and raised their sticks while clapping during an opening lap, acknowledging those in attendance as sorely missed because of COVID-19.

There will always be something special about the Knights and their fans. Always a remarkable bond forged in tragedy from the Oct. 1 shooting. Always a “Vegas Strong” banner hanging from the rafters to honor the memory of those killed that fateful night.

So this is an important step for many reasons, mostly because there might not be a better feeling right now than one of routine. Be it a sold-out arena — which should return over time — or groups of mask-wearing fans separated into seating pods, ordinary has never been more welcomed.

It sure was a better look than that failed sponsorship deal.

I don’t know if it’s good timing or mere coincidence, but the Knights announcing on Monday they had hired a chief legal officer to advise on “all legal affairs of the organization and affiliated enterprises, including licensing, trademark and business contract-related matter,” is all sorts of ironic.

It wasn’t just that the Knights agreed to a multiyear partnership with UpickTrade, a tout service site based in Guadalajara, Mexico. That’s bad enough. It was that the team — or at least those who made the deal — seemingly had no idea about the difference between a legitimate betting outlet and one such as UpickTrade.

You either know or you don’t, and it’s much worse if you don’t.

It’s also the first major chink in the team’s armor since its 2017 inception, one the Knights at least admitted was a terrible optic by cutting ties with the service just days after announcing the move.

There has never been such a negative backlash — deservedly so in this case — toward anything Golden Knights. This team could announce DeBoer bought a new tie for its next game, and hundreds of folks would be running to stores trying to grab one.

(Even though it would probably be sold at the team store for, well, a hefty price).

But the tout business is over now, leaving only those forgettable gold helmets as a remaining eyesore.

Oh, and there is this: The Knights on Monday beat Minnesota 5-4 in overtime.

Which, given the week that was, might have been the least important story.