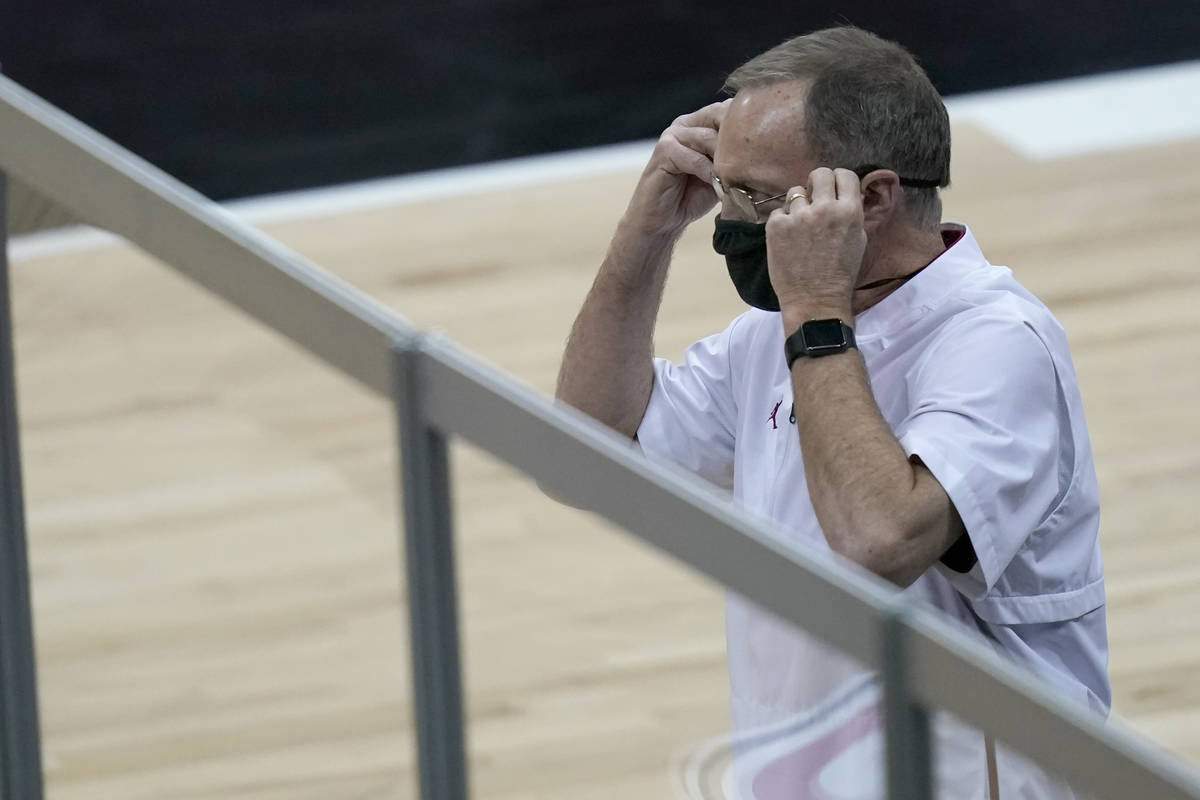 Oklahoma coach Lon Kruger adjusts his mask during the first half of the team's NCAA college basketball game against Iowa State in the first round of the Big 12 men's tournament in Kansas City, Mo., Wednesday, March 10, 2021. (AP Photo/Orlin Wagner) 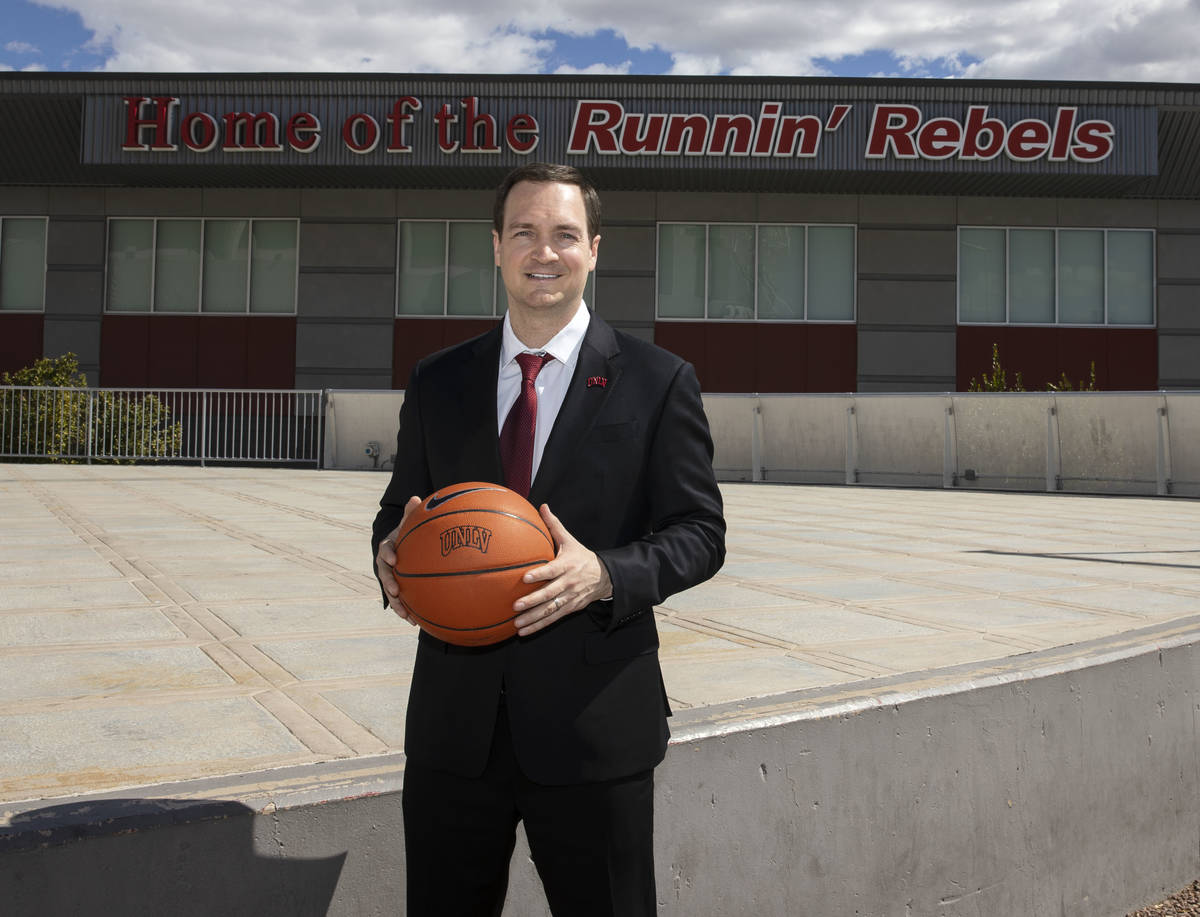 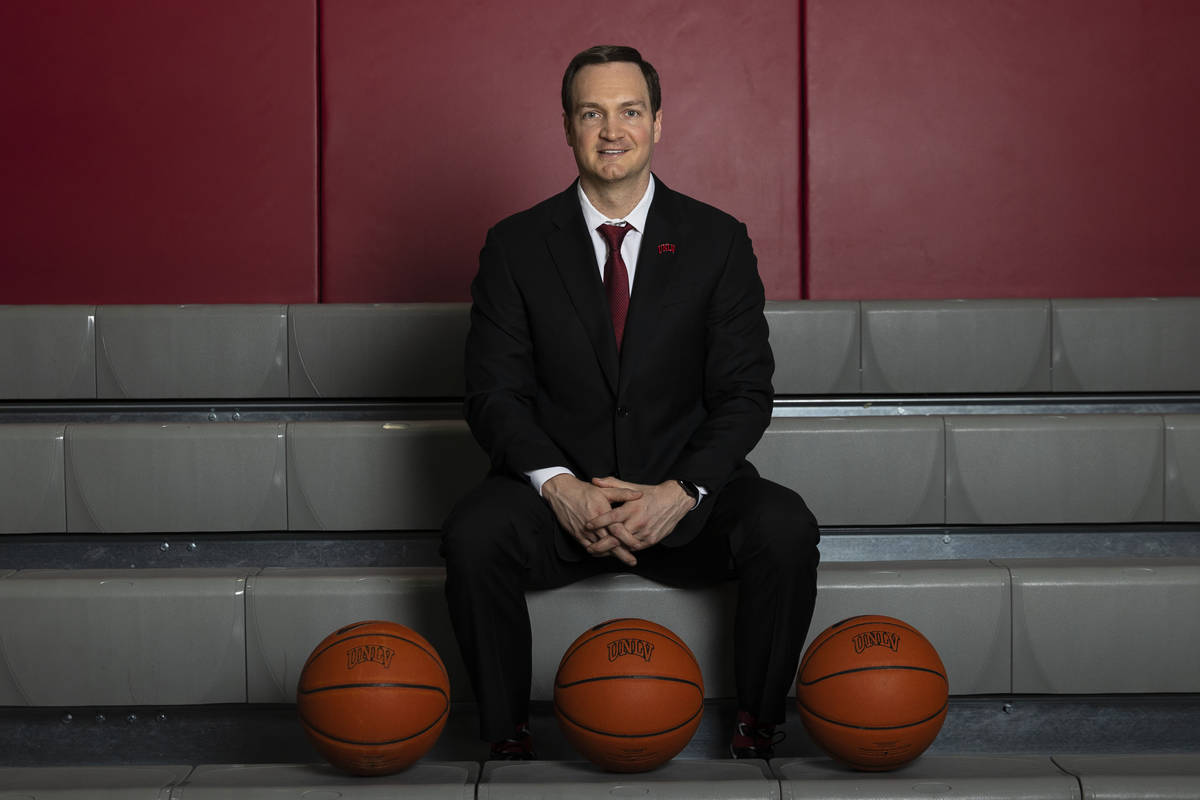 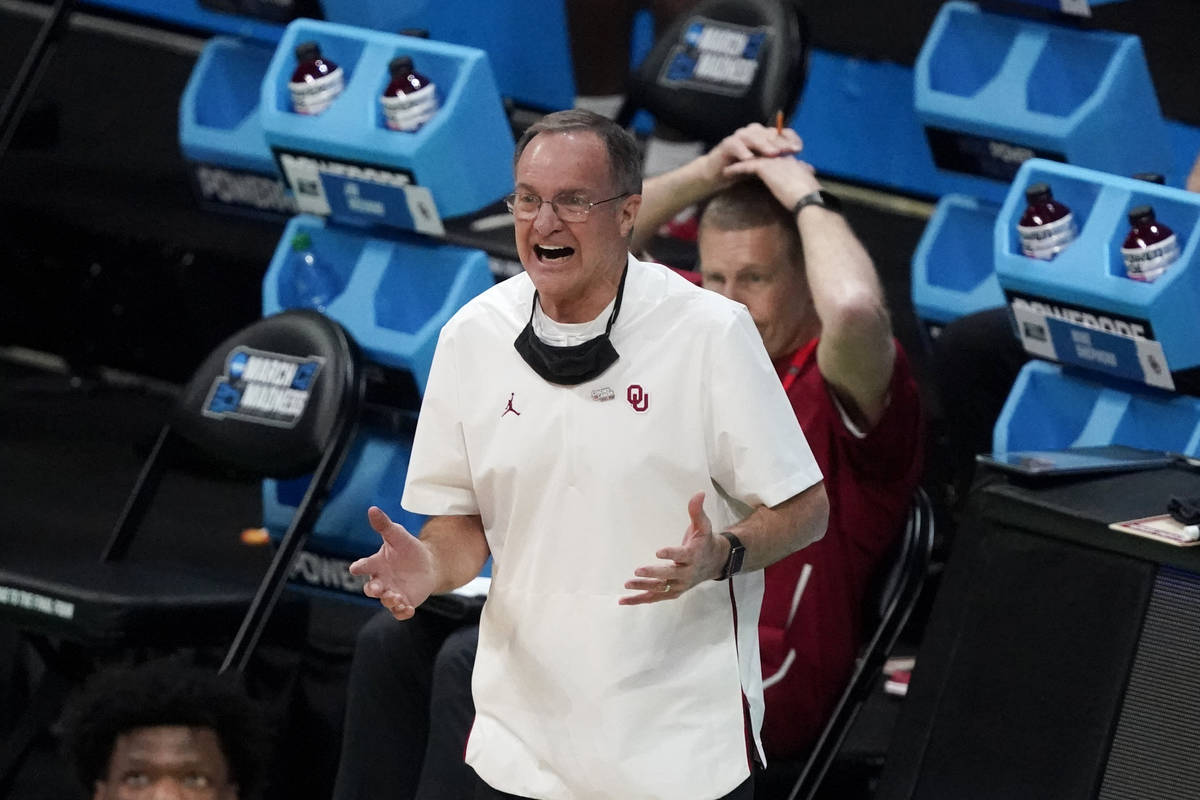 When he was head basketball coach at UNLV from 2004 to 2011, Lon Kruger rarely closed practice. He would encourage family and friends to attend, for parents to support their sons in an intimate environment.

Kruger now finds himself in a similar position, his son Kevin having been named head coach of the Rebels.

Dad gets a new viewpoint.

“I’ll be a fan,” said Lon Kruger. “I’m not going to be involved in anything day-to-day. As far as hands on or any Xs and Os, I won’t have anything to do with that. He and his staff will take care of all that.

“I’ll love going to practice and we’ll have talks as any coaches do. If he asks my opinion on something, I’ll give it. But I’ll be there just like anyone else — cheering them on.”

I’m not so sure about the no influence part.

Kruger announced his retirement from a 40-year plus coaching career just days after his son assumed the reins of UNLV’s program. It immediately caused many to wonder what role the father might play as he and wife Barbara make their way back to Las Vegas from Oklahoma, where Lon coached the Sooners for 10 years.

His father might not hold an official title, but the idea Kevin Kruger won’t want him as a major sounding board isn’t plausible. Lon Kruger won 674 college games and is one of three coaches (along with Rick Pitino and Tubby Smith) to lead five programs to the NCAAs. The younger Kruger should absolutely seek his counsel whenever possible. It would be foolish not to.

Already, more ties to Oklahoma are emerging. Kevin Kruger reportedly has hired Sooners assistant Carlin Hartman to join the UNLV staff. It could be the first of more names (be it on the coaching or playing side) that arrive to the Rebels from Norman. Meaning, keep an eye on the transfer portal.

“Kevin understands losses are tough and wins are meant to be celebrated and then you move on,” Lon said. “He will be more experienced and better in Year 2 than 1, like anyone taking a new job. Nobody started their first head coaching job in Year 3.”

Few beyond the late Jerry Tarkanian have been as popular with UNLV fans as Lon Kruger, who seamlessly blended the program’s past and present by returning the Rebels to annual NCAA berths while never forgetting those who came before.

It was Kruger — with significant support from Tarkanian — who reached out to and brought back many of the program’s alumni. Now, father believes son will do the same.

“I have no doubt Kevin will, because he loved that part of it and understood why it was so important,” Kruger said. “It sent a message that this was a program way before us and that we recognized and appreciated what they had done and the groundwork they laid.”

So here he is, the coach who led UNLV to a Sweet 16 among four NCAA trips, about to watch his son step into what can be a bright and welcoming and dark and unforgiving spotlight all at once.

It’s a delicate balance for the father, knowing he is an incredibly respected figure among the fan base and yet excited to see his son emerge from such a shadow.

“I will try and rally as many people as I can,” Lon Kruger said. “The community understands how great UNLV basketball can be and we’re going to try and remind it of that. I’ll do all I can to broaden that base. We know Kevin is fired up. While he wants this for himself, he will take great satisfaction if others that played here and have been part of the past enjoys it as much as he will.

“I assume practices will be open.”

Not to worry. I’m guessing they will leave a door open for him.