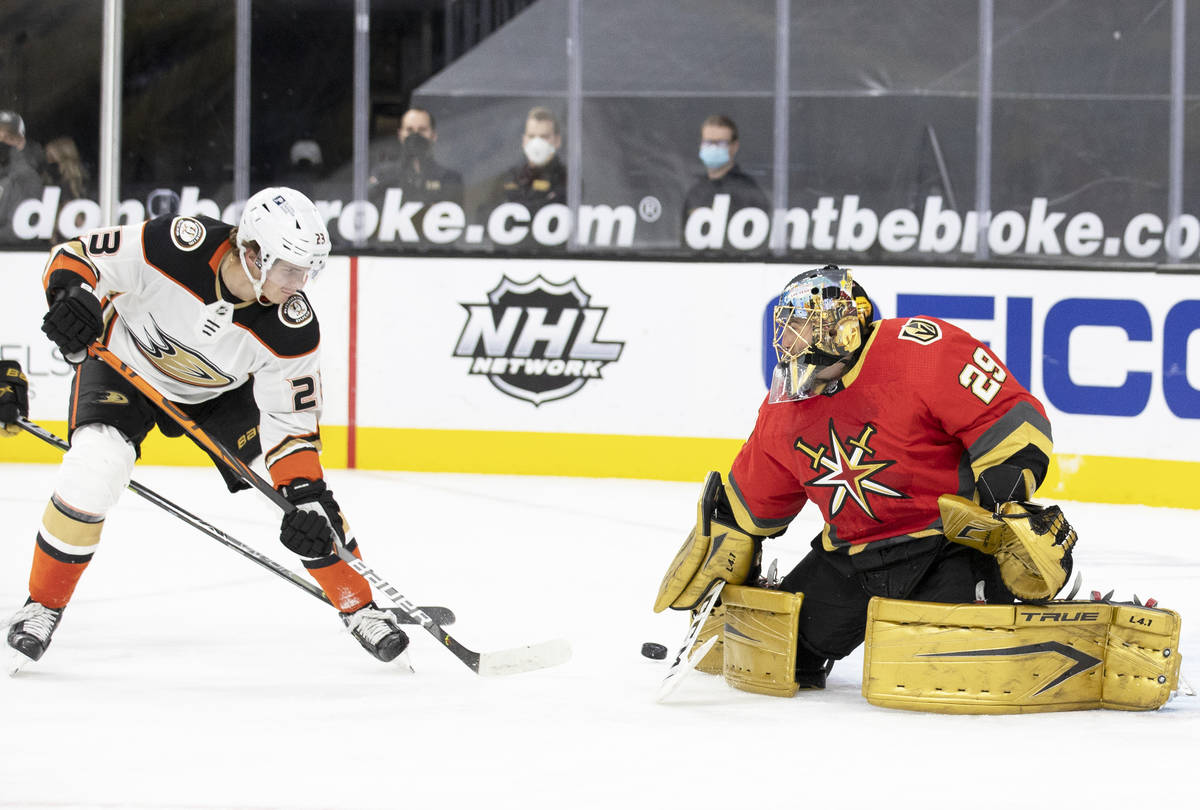 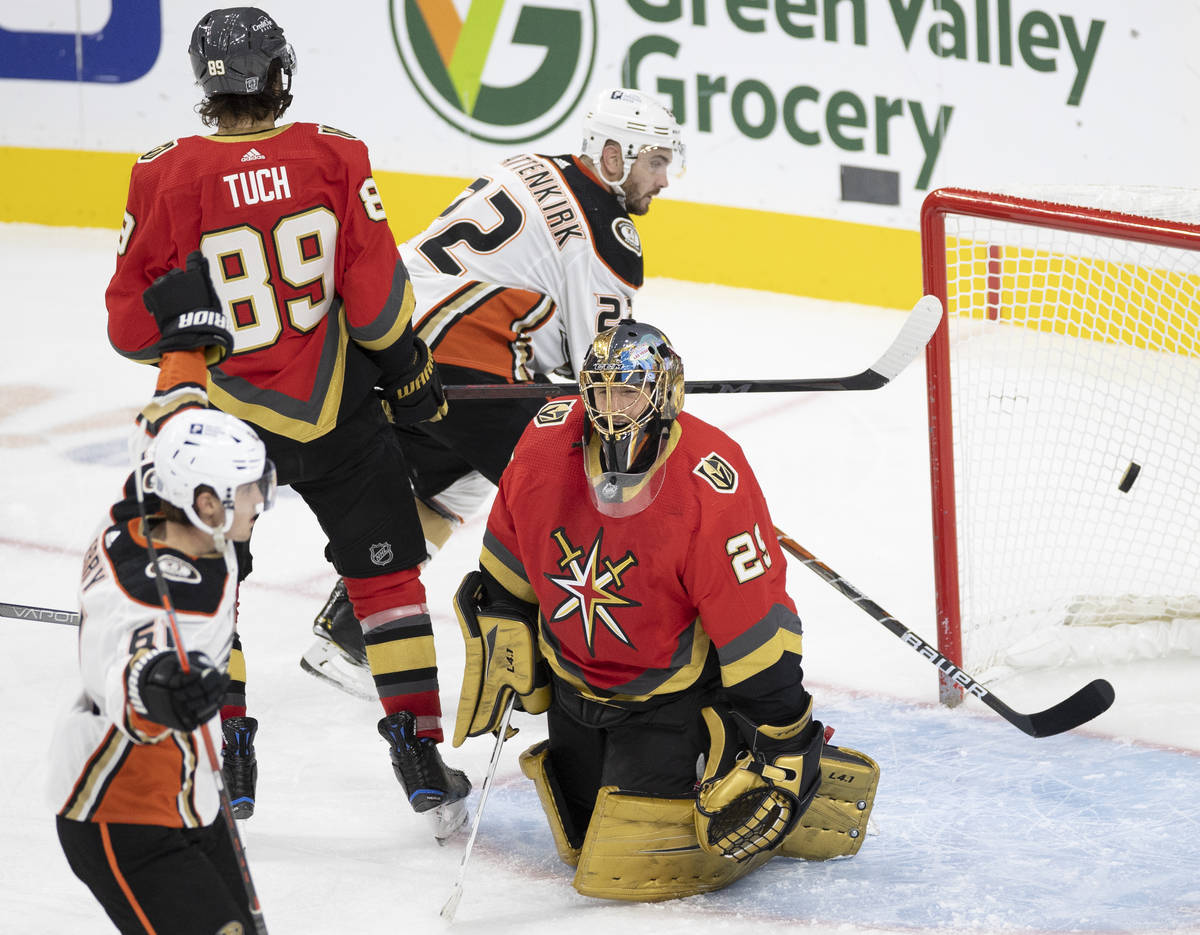 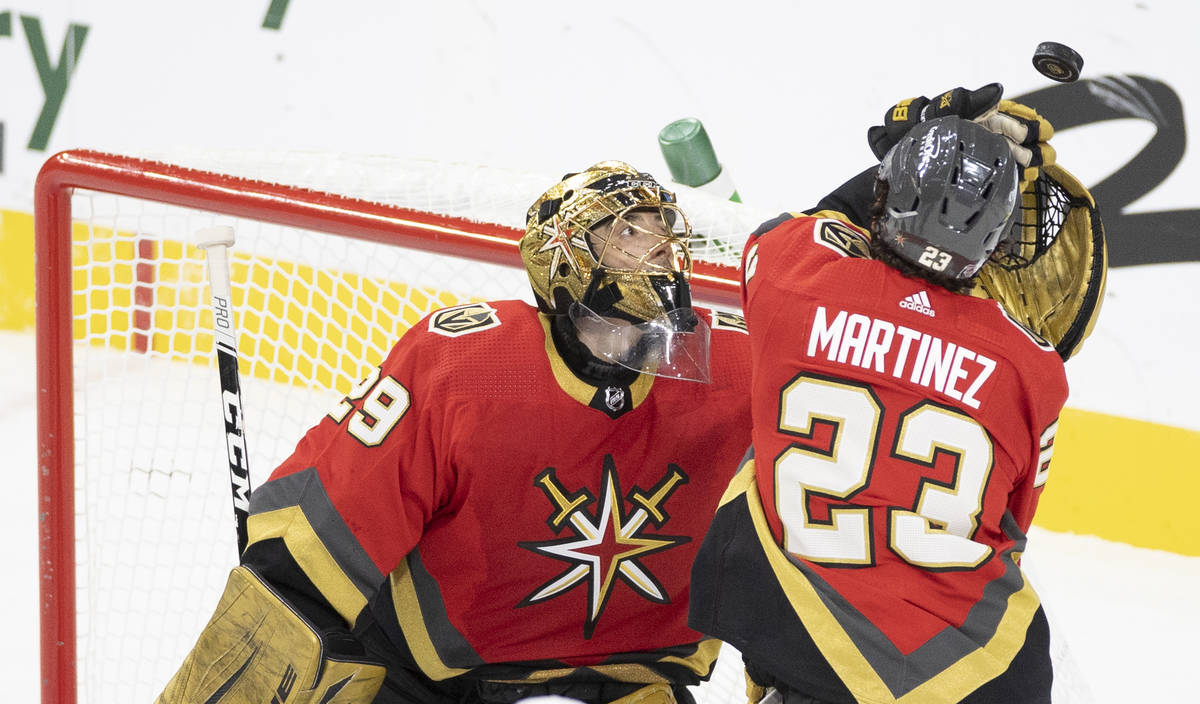 Vegas Golden Knights goaltender Marc-Andre Fleury (29) makes a save with the help of Vegas Golden Knights defenseman Alec Martinez (23) in the third period during an NHL hockey game against the Anaheim Ducks on Tuesday, Feb. 9, 2021, at T-Mobile Arena, in Las Vegas. (Benjamin Hager/Las Vegas Review-Journal) @benjaminhphoto

It’s often true that the most complicated skill is to keep things simple.

Golden Knights coach Pete DeBoer hasn’t had an issue with such when it comes to his goalie rotation. He hasn’t overthought the room.

It was Marc-Andre Fleury in net for Tuesday night’s 5-4 victory over Anaheim at T-Mobile Arena, the Knights continuing an every-other-game swap between Fleury and Robin Lehner.

There is no reason to alter such strategy, not beginning the season a franchise best 8-1-1, not when playing in the not-so-mighty Honda Division. The only way DeBoer probably would change to playing primarily one goalie would be if the other suddenly began a massive slump. I’m not even sure that’s possible given what we’ve seen from some Honda opponents.

No matter how interesting Anaheim made things Tuesday, which ended with the Knights canceling their postgame media availability because of COVID-19 protocols.

Even at 36 and winner of three Stanley Cups, even as the league’s fifth-winningest goalie of all time, Fleury has seemed beyond motivated. I suppose that happens when you spend an offseason reading and hearing about how your team is trying to move you. How there weren’t many (any?) interested takers in your $7 million salary. How you were thought expendable.

That’s not to say the Knights were wrong. They signed Lehner to a five-year, $25 million deal and, well, he had been the better goalie between the two for some time. But when a condensed schedule arrived for a COVID-19 influenced season, having two such names was viewed more of an advantage.

Whatever the reason for such renewed spirit — Fleury simply wasn’t good last season — he entered the Anaheim game with a 1.25 goals-against average and .944 save percentage. He took a step back from those numbers Tuesday, the Ducks rallying from down 4-1 by scoring on three straight shots on goal in the third period.

Fleury — now 5-0 — also wasn’t always helped by those in front of him, who for stretches did a lot more watching than moving.

“When I got here, the word on Marc-Andre was when he was fresh, he was lights out, and his numbers were very good at the beginning of seasons and coming out of breaks,” DeBoer said Monday. “He has been great for us, arguably our best player so far. If we can keep those guys fresh and have great energy at the most important position on the ice every night, that’s a good start.”

Lehner — 3-1-1 with a 2.96 goals-against average and an .890 save percentage — hasn’t been as crisp. But the Knights have been winning, and he gets better as games go on. I suppose there will come a time when DeBoer must choose, but that seems far off right now. Too many games clumped together. Too many games being won.

Here’s another thing: When you have such a level of fresh goaltending, it allows a team such as the Knights to be even more aggressive with their speed. The transition game becomes even more dangerous. They’ll often take too many chances in their own zone and leave themselves (goalie) vulnerable, but it sure looks impressive when things work out.

“It happened to us,” said Arizona coach Rick Tocchet, who saw the goalie swap from the Knights four straight times last month. “We missed a chance, like a glorious chance, it was right in front, and they went the other end and scored. It’s a big two-goal swing. That’s huge to have that kind of firepower with those two guys in net. They’re lethal.”

But not so much that you start overthinking the room.