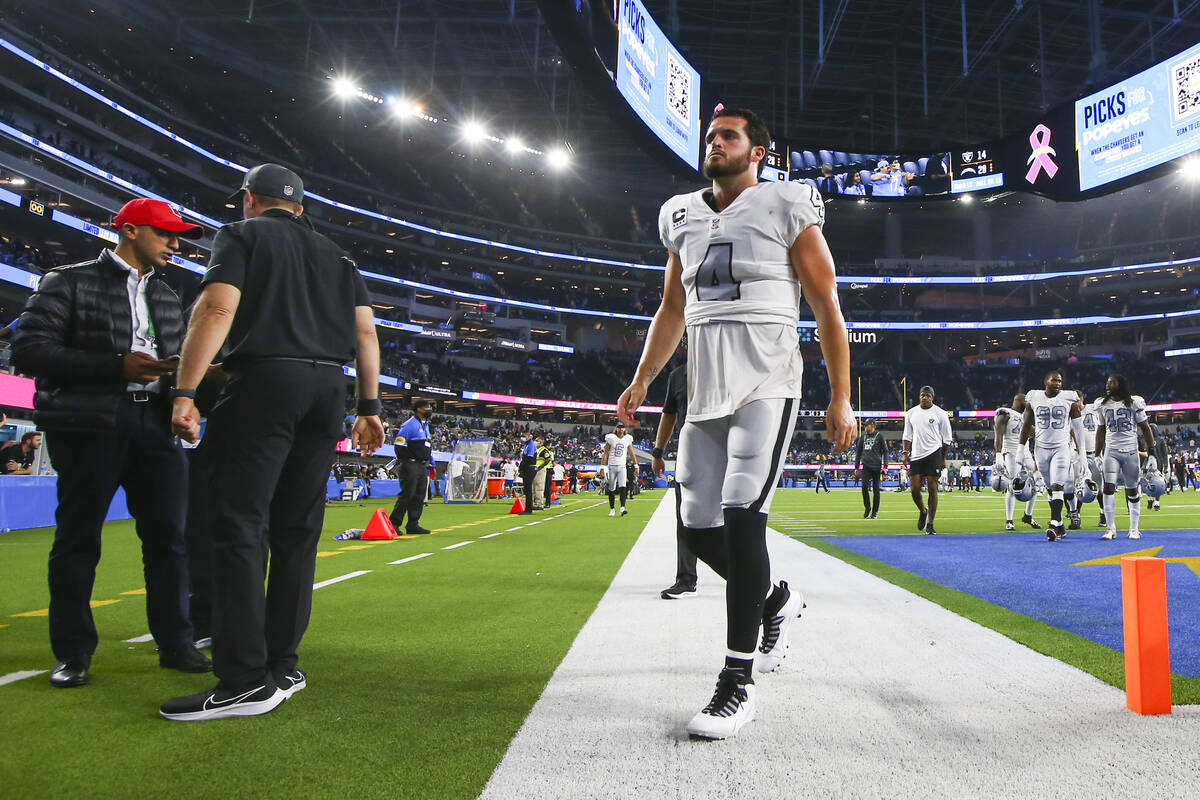 Raiders quarterback Derek Carr (4) heads off the field after a 28-14 loss to the Los Angeles Chargers in an NFL game at SoFi Stadium in Inglewood, Calif., on Monday, Oct. 4, 2021. (Chase Stevens/Las Vegas Review-Journal) @csstevensphoto

Joey Bosa had an opinion and is entitled to it. But not all judgments should be evaluated in a vacuum.

Or from one picture in a time of chaos.

Bosa is the gifted defensive end of the Los Angeles Chargers who had a few things to say following his team’s 28-14 win against the Raiders on Monday night.

He didn’t hold back in surmising that Raiders quarterback Derek Carr is apt to be shaken once hit a few times. That once pressure comes, Carr recoils and shuts down.

Which brings us to that one still frame. A single static image that made its way across the Web when things concluded at SoFi Stadium.

It is of Carr curling into a defenseless position as Chargers defensive end Christian Covington bears down on him in the fourth quarter.

Yowza. Seems a bit unfair. My guess is Bosa got to the locker room and saw this sent to him about 50 times in the group text and decided to pop off about it. Carr is having a great season despite the struggles of the line https://t.co/VPGg8jrjI9 pic.twitter.com/ndeoPMhKjj

There is absolutely enough space between the players to question Carr’s willingness to give up on what was a critical third-down play with the Raiders driving to potentially tie the game.

But these things also happen at 100 miles per hour. It’s a big leap to question a player’s toughness and label him soft — which is essentially what Bosa did — from one snap in four quarters.

“I love Joey and he knows that,” Carr said. “It’s fine. The opinions I care about are when I come into the building. It will always be that way … I thought it was unfortunate that he’d even think to say it. Maybe he was just trying to get under my skin, which he did piss me off. So good job.”

I don’t remember Bosa having much to say in this regard when the Raiders won at SoFi last season. He missed that game after suffering a concussion the previous week.

But he is the first to go on record about what has for so long been a viewpoint swimming under the surface about Carr: That of a player who more times than not becomes skittish under duress and checks down when pressure arrives.

Nobody needs Bosa to confirm that. Carr has been that quarterback often during his career. But not this season. Not through four games.

Not when he gets some actual protection.

The bigger elephant in the room right now is this: An offensive line for the Raiders that has been awful.

The Raiders have allowed 12 sacks this season. It’s no wonder Carr senses the rush more and more. No wonder he appears so uncomfortable at times.

The idea he should have thrown downfield more Monday is beyond shortsighted. You need time for that. He isn’t getting much at all right now. He was sacked four times and hit seven others.

Henry Ruggs is fast. He’s not that fast. He isn’t getting to the top of a post route in under 3 seconds. The Raiders need to fix their line issues far more than worrying about how Carr reacts to a rush.

The front couldn’t block Bosa. Or Covington. Or Kyler Fackrell. Or Jerry Tillery. Couldn’t keep them from causing all sorts of disruption. That’s the issue here.

Carr is athletic enough to run. I’m just not sure he wants to. But he was good enough in the pocket through three wins to open the season that many began mentioning him as a leading MVP candidate.

Those screams turned to whispers following the Chargers loss, but don’t forget Carr averaged just over 400 yards per game passing in that 3-0 start.

Was he soft then? Because his line was no better than what we saw Monday.

Bosa is a great player. He has also missed at least four games in three of the previous five seasons with injury. He missed nine in 2018. Is he soft?

“It was an emotional night (for the Chargers),” Carr said. “Joey is a good dude. He’s entitled to say it.

“We’ll worry about him another day.”

Opinions are fine. They’re just not always sensible when made in a vacuum.