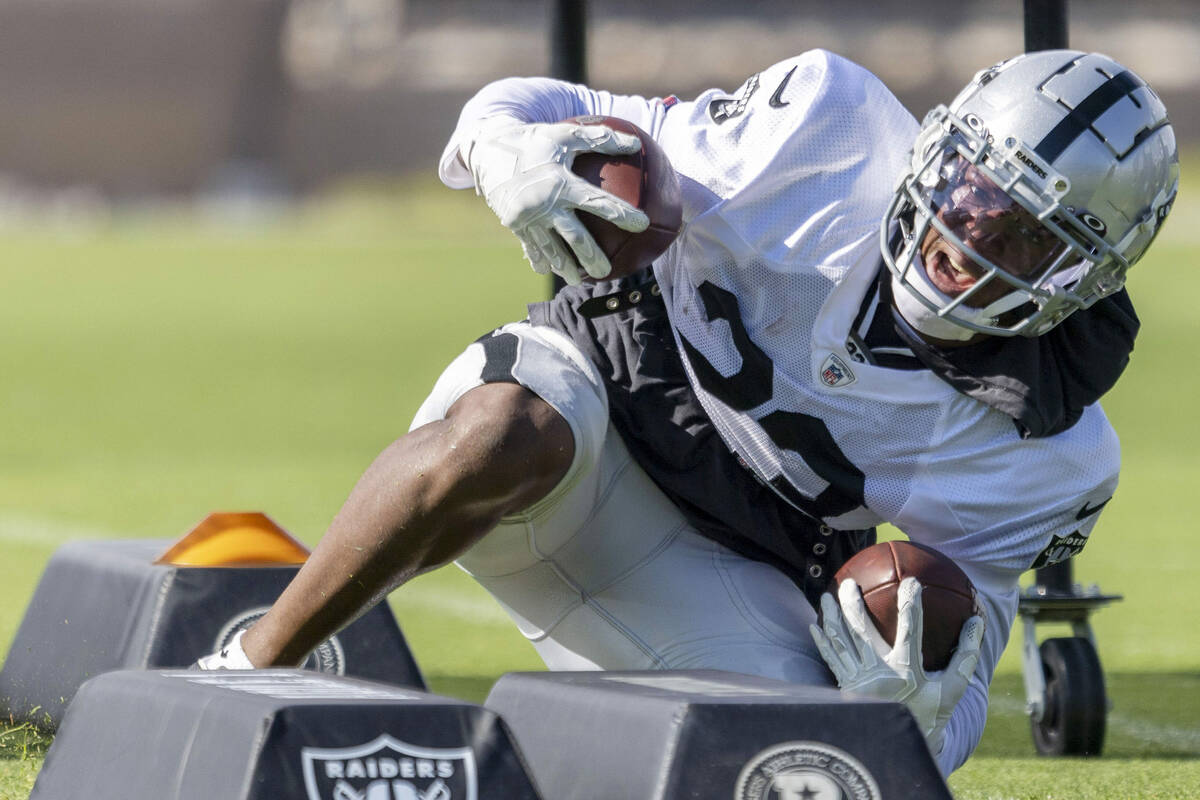 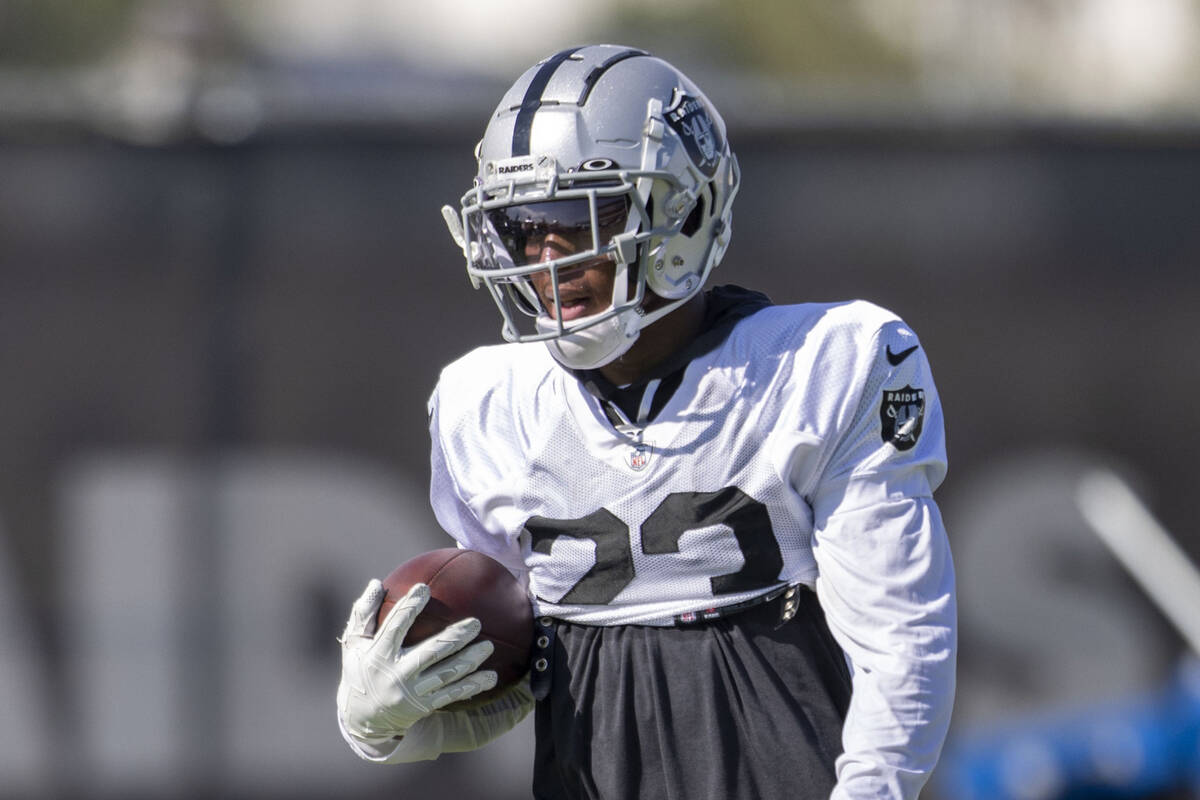 Raiders running back Kenyan Drake (23) holds onto the football after a drill during the team’s training camp practice at the Intermountain Healthcare Performance Center on Thursday, July 28, 2022, in Henderson. (Heidi Fang/Las Vegas Review-Journal) @HeidiFang 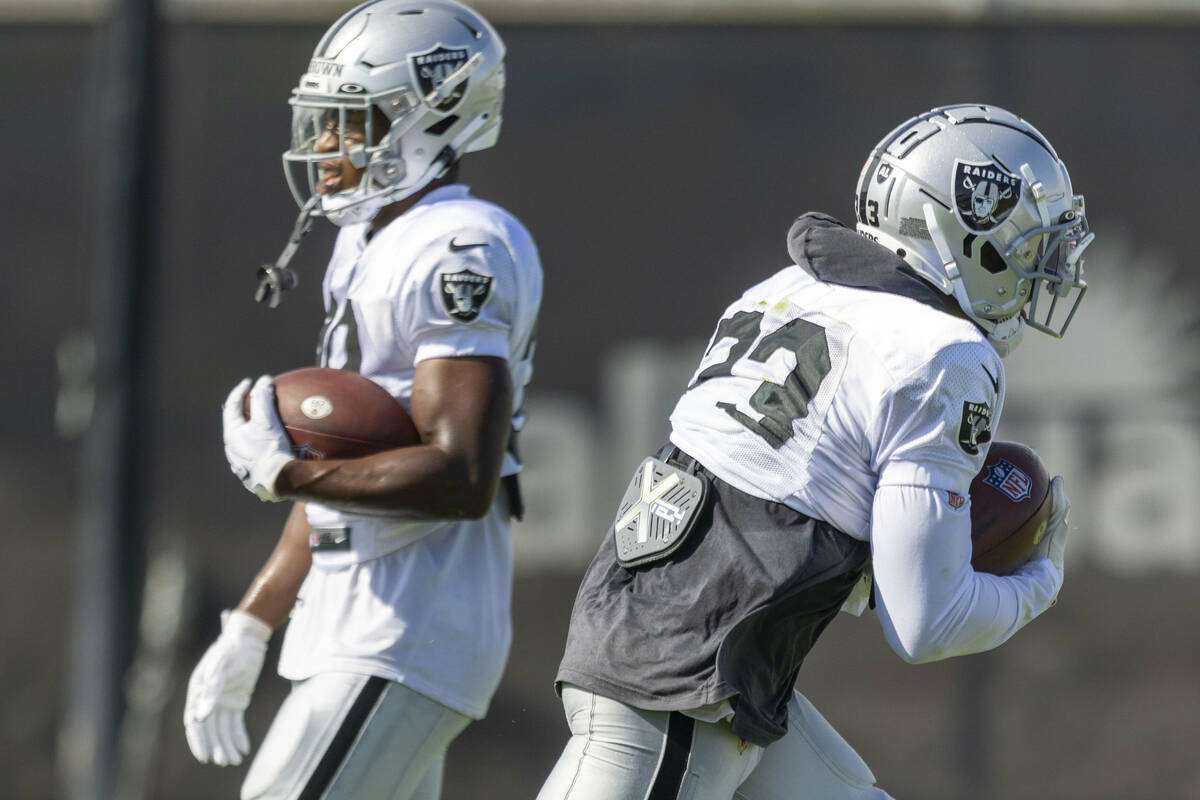 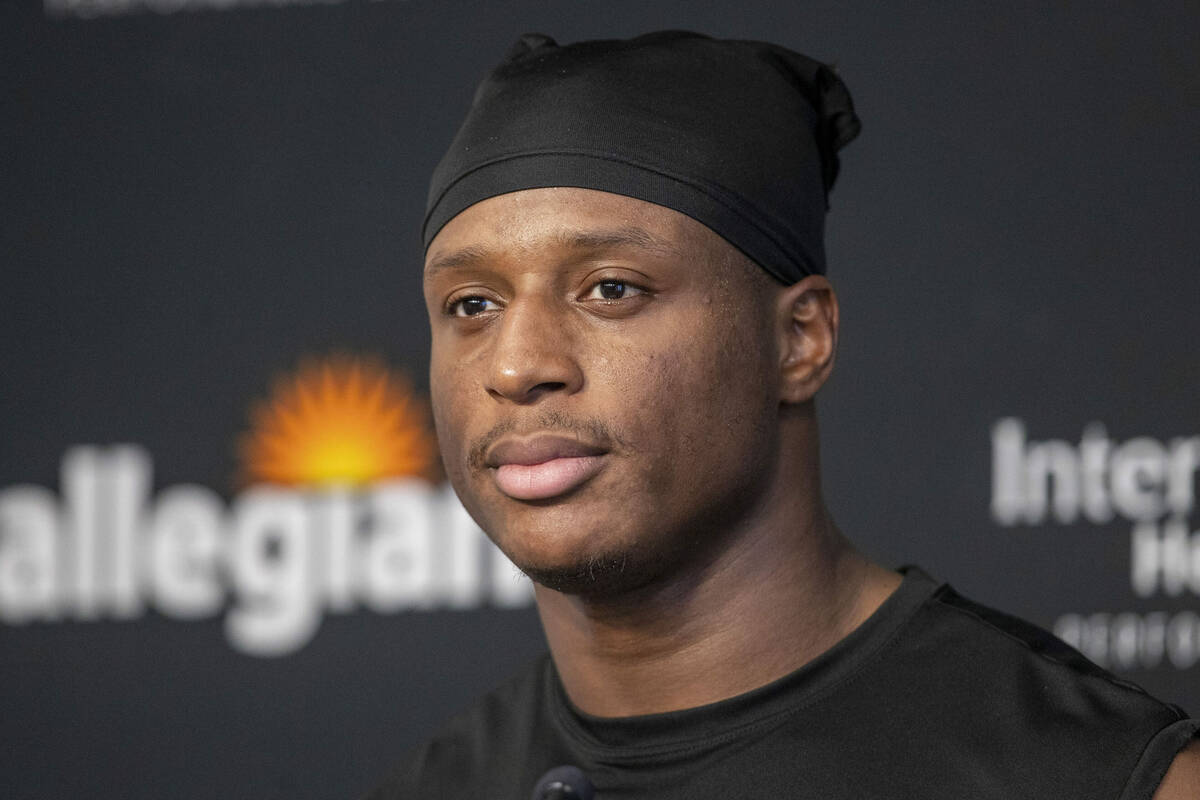 Kenyan Drake thought about it for a second. Outside zone run. The same play in which he broke his ankle with five game remaining last season.

It all flashed through his mind as the Raiders practiced in full pads Thursday.

“It’s kind of funny,” Drake said. “I had to kind of consciously think about how not to think about my injury. It felt good getting hit again, so I’m back and I feel good.

“It’s not my first rodeo. At the end of the day, it’s football. I’ve been playing since I was six years old. Can’t really think about injuries.”

He is in a seventh NFL season and still offers the versatile skill set that has defined his career. Still a guy who does a little bit of everything. Run it. Catch it. Whatever is asked.

But there’s a crowd at running back for new coach Josh McDaniels. Lots of guys with different strengths and big appetites to prove themselves. Little does anyone know yet how things will shake out when the season opener arrives.

This much is true: The offense McDaniels ran in New England and now here has this consistent way of identifying a player’s strengths and makes certain they are featured within the scheme. Shouldn’t be any different for Drake.

McDaniels gets (deserved) credit for how well he uses positions such as slot receiver and tight end. It’s one reason the likes of Hunter Renfrow and Darren Waller probably walk around the practice facility with broad smiles more days than not.

But running backs have also excelled under McDaniels, and it has often been more than one. Done so by committee. Done so in a way in which the Raiders could see ample production from a handful of names out of the backfield.

Josh Jacobs is a returning starter who, while he didn’t have a fifth-year option exercised, looks fresh and capable thus far in camp. He too is working himself back into shape after recovering from an undisclosed injury.

And then there is Drake.

“He jumps in there, man,” McDaniels said. “Him and (Jacobs) both are taking a lot of reps. Really like the way (Drake) is working. Good attitude, good guy, and obviously he’s done a lot of different things in this league. Got a competitive room and they all feed off one another, they all help one another, which is great.”

Drake was primarily a backup in Miami for four-plus seasons, was traded to Arizona and started 21 of 23 games. Now, in his second year with the Raiders, he has returned to that rotational role of adding whatever he can depending on the situation.

It has been a long road back.

He missed the opportunity in the spring to be in the huddle, understand all the calls, do all the things necessary to acclimate himself to a new offense. He’s still catching up.

Example: As accountability has been a point of emphasis this entire camp, Drake as a veteran helps lead the way. He fumbled during a 9-of-7 situation Thursday and immediately ran a lap. He dropped a pass in another drill and offered 60 push-ups — 10 for the miscue and another 50 for the fumble.

“I try to run my own race,” said Drake, in a contract year and whose deal was restructured this past offseason to clear cap space. “Plays are going to be made, people are going to make plays whether it’s me or somebody else. I’m all for it. Hopefully, I can contribute the way I’ve been in my career.”

Which is to say a little bit of everything.

His is the ideal skill set for a running back by committee approach.

Run it. Catch it. Whatever is asked.