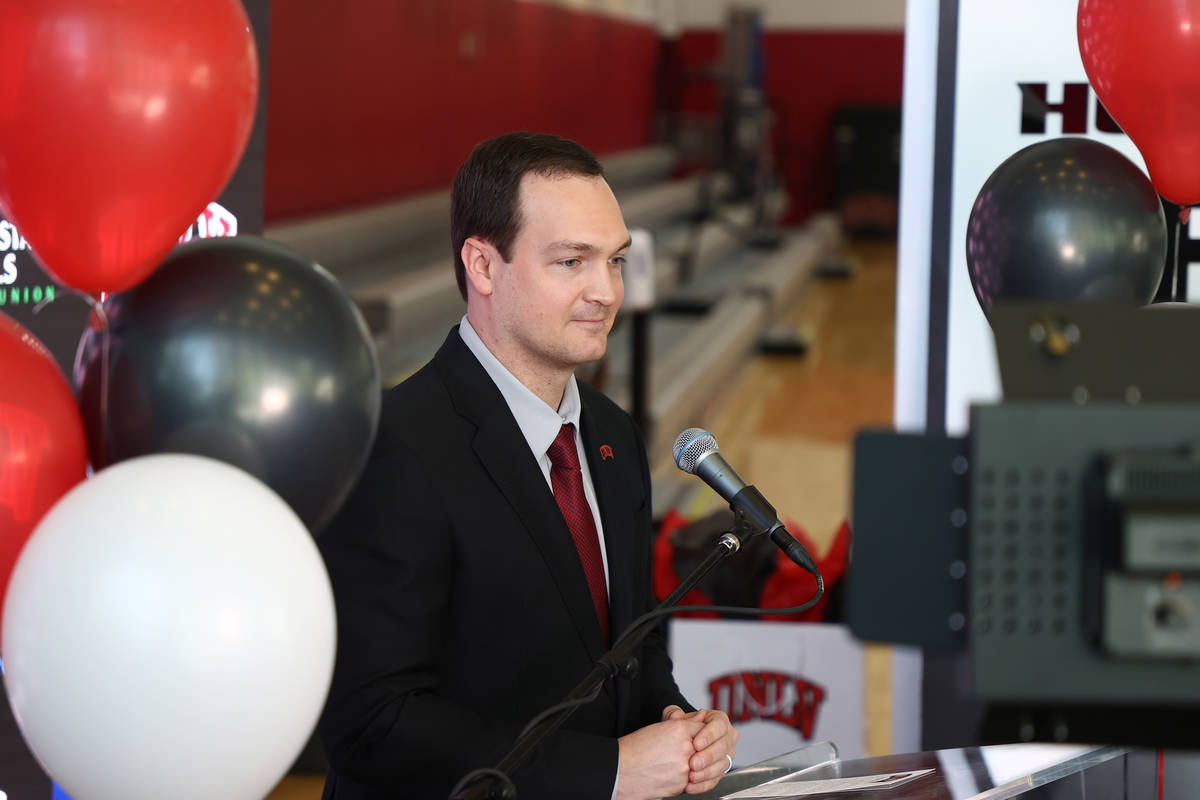 Kevin Kruger says there wasn’t any particular moment. It’s not as if he awoke one day to realize leading a Division I college basketball program was his destiny.

But he’s here now — introduced as the UNLV coach Monday — and a fair question looms: Is he ready?

Kruger played for his father, Lon, at UNLV and then spent time on his staff at Oklahoma. He also assisted Jack Murphy at Northern Arizona and T.J. Otzelberger for two seasons with the Rebels. He also had a college and professional playing career.

Preparation might not guarantee readiness, but it sure helps.

“I look at my parents and family, by the example that was being set, being a college basketball coach was something I always dreamed of doing,” Kruger said. “Playing as long as I could was the goal. We accomplished that, and moving over to the coaching world was a natural progression to stay a part of the game … I’m confident we can get it done.”

Now all he has to do is prove it.

Kruger seamlessly handled his introductory news conference, but that was expected. He’s never going to struggle explaining his thoughts on basketball. But the challenge is far different from upsetting second-seeded Wisconsin in 2007, when Kruger’s second-half shooting as UNLV’s point guard led the Rebels to a 74-68 win and into the Sweet 16.

The hire by athletic director Desiree Reed-Francois is a gamble. Plain and simple. When you hand the keys of a program to a coach who has never sat in the lead chair, unknowns outweigh certainties. Kruger might prove an excellent choice. He might not. Nobody really knows.

He spent a large amount of time Monday talking about how UNLV basketball is an extension of the city, how he wants his team to play for Las Vegas and make it proud. It’s a noble and yet ambitious goal right now.

It begins with players. He needs better ones than comprised a roster that finished 12-15 overall and seventh in the Mountain West this season. The city — or all those empty seats at the Thomas & Mack Center in recent years — has spoken loud and clear about its feelings toward the product. Many still hold impractical expectations, but the overall message is obvious.

You have to win big to bring them back, to create the sort of buzz Kruger spoke about when remembering how electric the home venue was when playing in it. There is far more competition now for the local sports fans’ dollar than when Kruger was running his father’s offense.

Kruger is similar to current conference coaches Niko Medved (Colorado State), Craig Smith (Utah State) and Jeff Linder (Wyoming) in that all were Mountain West assistants before getting top jobs within the league.

The difference is, the others departed for head coaching positions and valuable experience before returning.

So here exists the blank slate, at times as taxing as it is exhilarating, prepared for Kruger to chart his own journey as the leader of UNLV’s program. He was confident Monday. Excited about getting to work. Passionate in his love for everything Rebels.

UNLV has taken a big chance here. It’s not a program that needs to.

But that doesn’t mean it won’t work. Perhaps extraordinarily so.

Kevin Kruger has led his entire life. He’s 37 and comes from great stock.

Is he ready? Stay tuned.

Because if you think you know, you don’t.