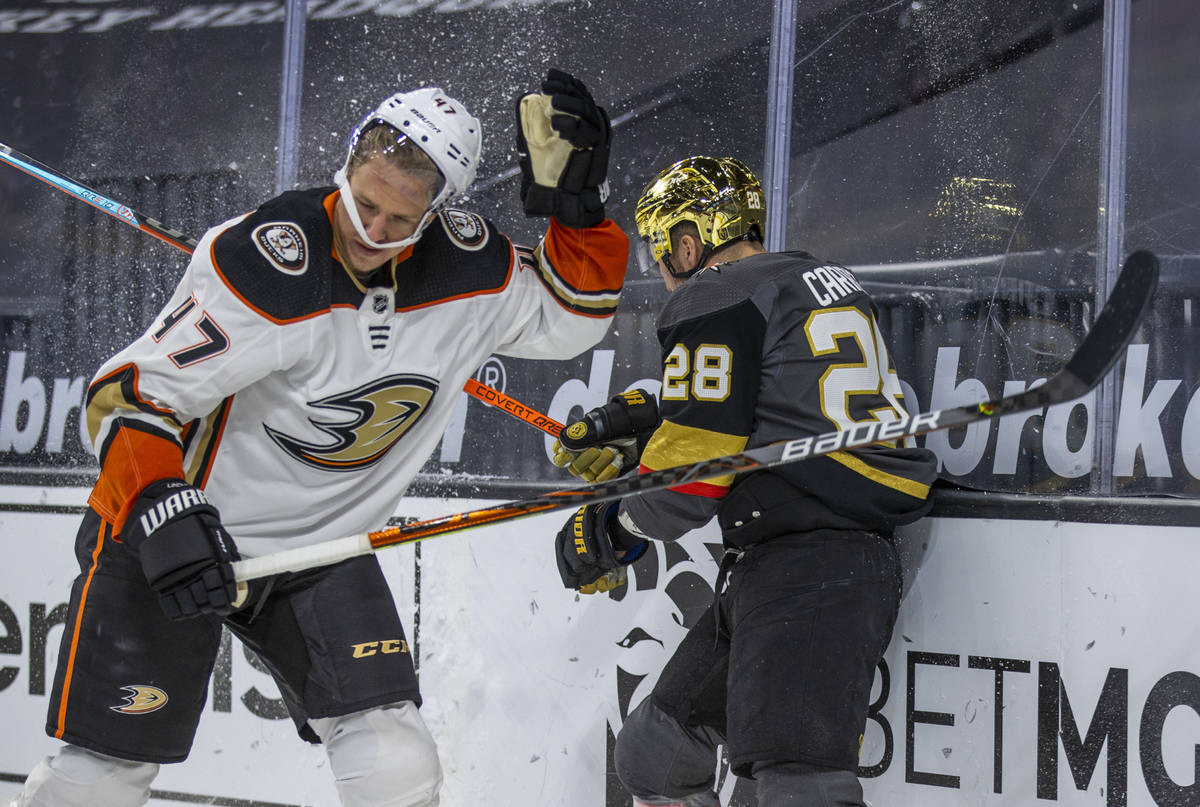 Anaheim Ducks defenseman Trevor Carrick (47) has his helmet rocked after a hard check from Golden Knights left wing William Carrier (28) during the second period of an NHL game at the T-Mobile Arena on Thursday, Feb. 11, 2021, in Las Vegas. (L.E. Baskow/Las Vegas Review-Journal) @Left_Eye_Images

The NHL continues to be in response mode when it comes to COVID-19, chasing positive tests with more and more enhanced protocols.

There is no ideal solution. Never has been. The decision was made to play a season outside a bubble. So this is what you get.

Perfection is difficult to create in a barrel of chaos.

At this point, players are one more pause from being mandated to live under beds when not at the rink.

They played a game Thursday night at T-Mobile Arena, where the Golden Knights lost to the Anaheim Ducks 1-0. A game that many thought might be postponed when Knights forward Tomas Nosek was informed before the third period of Tuesday’s matchup between the teams that he had tested positive.

A few things: The league has continued to implement stricter protocols to potentially slow COVID-19 outbreaks. It also has become obvious that the NHL will do everything it can to play as many games as possible.

On its face, no part has been more baffling than what constitutes close contact, which states a player would have to be “within 6 feet of the index individual for a cumulative total of 15 minutes or more over a 24-hour period, starting from two days before illness onset.”

I’m pretty sure guys were that close to and around Nosek before and during Tuesday’s game to qualify. But there had been no other positive tests — which anyone knows means nothing given symptoms can arise days after exposure — so they played on. Of course they did.

“I think you can prepare for it, but until it happens, I can imagine if you’re a player and everything is racing through your mind,” DeBoer said. “How much contact have you had with him? Are you sitting beside him? You’re worried about him, his family. There’s a lot of things that race through your mind those moments that can affect your performance.”

Not 24 hours after the Knights were informed of Nosek’s positive result, the league again strengthened protocols. Five teams are currently on pause. There have been 35 postponed games. There are 50-plus names on the COVID list.

What they were doing wasn’t enough.

The (really) good: Among the new protocols, the NHL will now administer game-day rapid testing to U.S.-based teams, of which results can be known within 30 minutes. It’s a long time coming. Too long.

They might not be as accurate as PCR testing, but at least those of the rapid variety might help avoid a situation like the one with Nosek being informed during a game.

What else is new?

Another positive test, another realization things aren’t going all that well.

“This is the way the world is right now,” Golden Knights captain Mark Stone said. “This is kind of the new normal, unfortunately … It would have been a little bit naive to think we were going to go through the whole season without one guy testing positive. I think now we’re learning as a group and as a league. I think everybody is learning as we go.”

Learning and responding. What happens when you continue chasing a deadly virus.