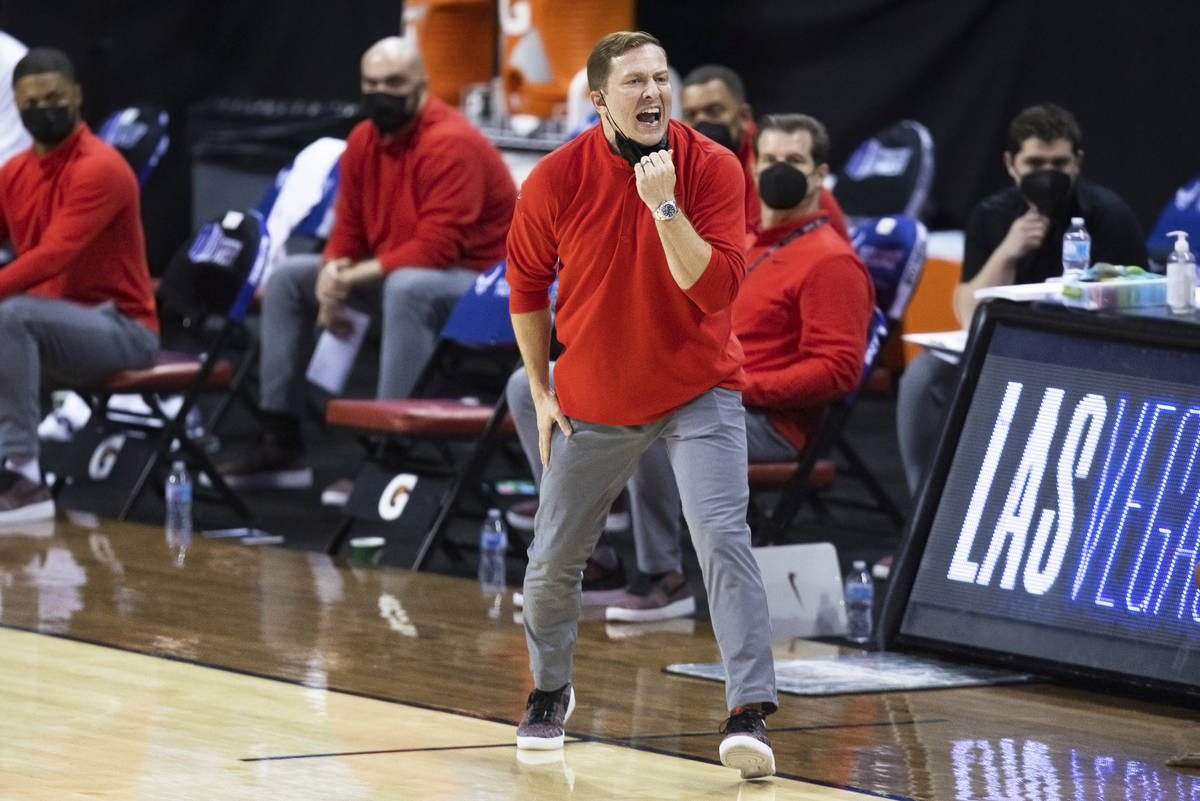 UNLV Rebels head coach T.J. Otzelberger directs his offense in the first half during the opening round of the Mountain West conference men's college basketball tournament against Air Force on Wednesday, March 10, 2021, at the Thomas & Mack Center, in Las Vegas. (Benjamin Hager/Las Vegas Review-Journal) @benjaminhphoto 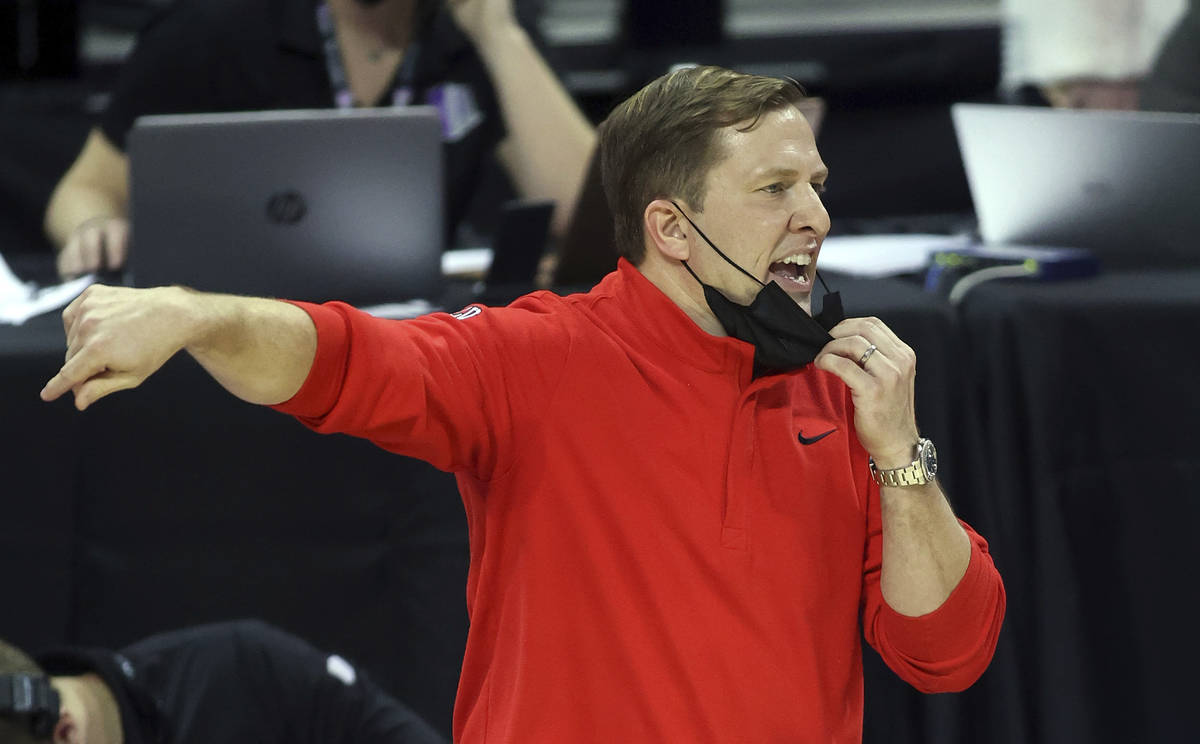 UNLV coach T.J. Otzelberger gestures during the second half of the team's NCAA college basketball game against Air Force in the first round of the Mountain West Conference men's tournament Wednesday, March 10, 2021, in Las Vegas. (AP Photo/Isaac Brekken) 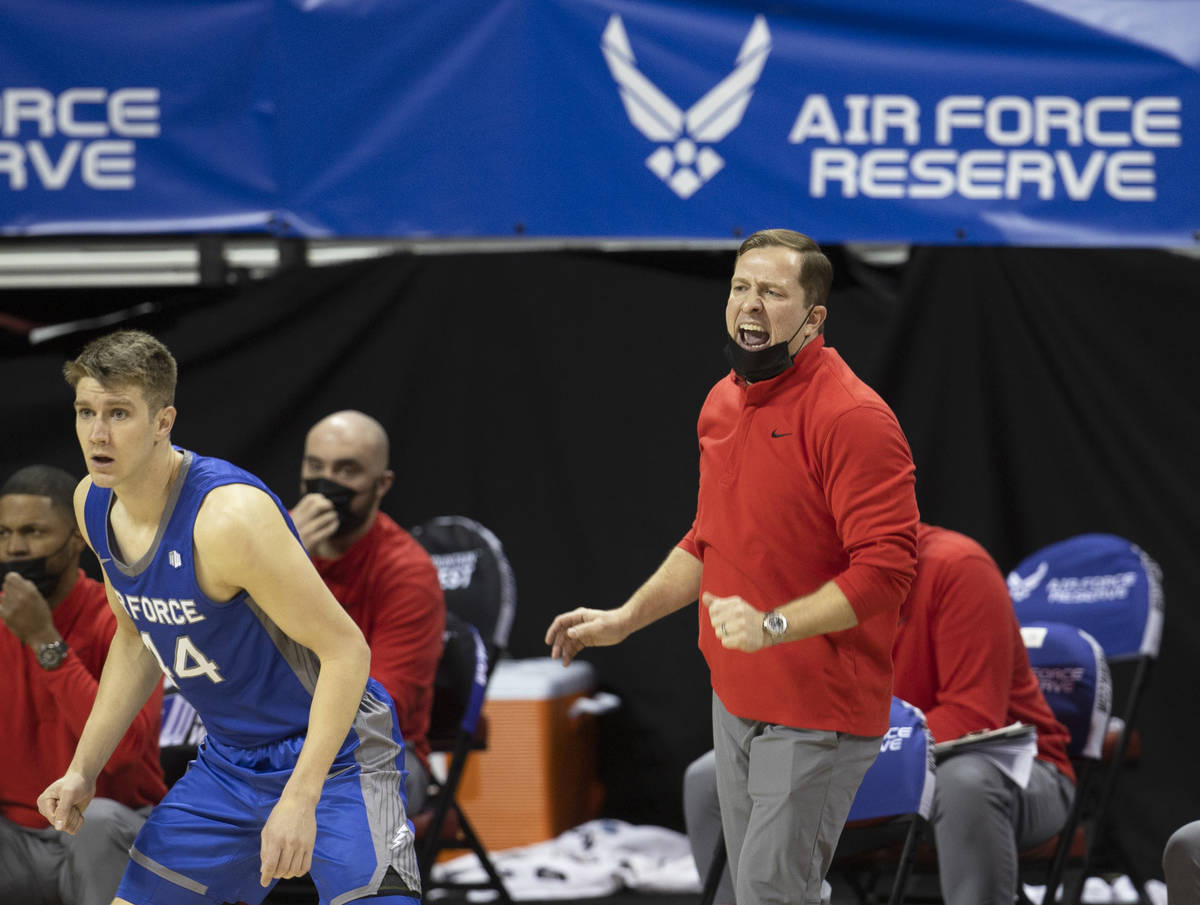 A few things about UNLV coach T.J. Otzelberger: His voice today might be more hoarse than if he lost it at a Foo Fighters concert in the late 1990s. Also, he just invented a new workout for arm day.

His team will play on after dismissing Air Force 80-52 in a first-round game of the Mountain West basketball tournament Wednesday at the Thomas & Mack Center.

There wasn’t a defensive possession in which Otzelberger didn’t talk (scream) his team through, in which he didn’t implore it to raise its hands and move its feet and realize the shot clock was winding down and, for goodness’ sake, close out and not give up a 3-pointer.

He also did this by consistently waving his arms as if competing in the 1500-meter freestyle at the Olympics.

And it worked. All of it. Every last screech and front crawl stroke through the imaginary water.

I mean, he coached …

There is a lot to like about any 28-point win, but the Rebels were able to run away in the first half because they defended even better than Otzelberger could have hoped.

It’s not as if UNLV has been confused as a good (or even average) defensive team in most games. Quite the opposite.

But on an afternoon in which the only way Air Force could remain competitive was beyond the 3-point line, the seventh-seeded Rebels were all kinds of good.

In two regular-season losses against UNLV, the Falcons shot 45 percent on 3s. They were 2 of 18 on Wednesday, including 0 of 9 in the first half.

“It has been an Achilles heal for us all year long,” Otzelberger said. “Our ball pressure has been an issue. We were good with that today. We did a better job getting closeouts early. We switched aggressively. Many of the things you need to do to guard the 3-point line effectively, we were able to implement and do.

“As a coach, when things you practice on a daily basis come to fruition during the game, you’re pleased. Today, I was really happy with our guys that way.”

UNLV’s reward for such an impressive win: A quarterfinal date against No. 2 seed Utah State at 6 p.m. Thursday.

The teams split meetings in January at the Thomas & Mack, and yet UNLV never capitalized on a 59-56 win to open the series. The Rebels would follow that with three straight losses while dropping eight of their final 13 regular-season games.

But the Rebels of Wednesday can beat Utah State. Bryce Hamilton (18 points, seven rebounds, four assists) as the efficient player he was against Air Force could be the difference. Mbacke Diong (16 points, eight rebounds) of this latest win can more than hold his own against the league’s best player (Aggies center Neemias Queta).

True. That’s also a lot of ifs for a UNLV team that won only two straight conference games on two occasions, and those were against two of its worst teams in San Jose State and Air Force.

The Falcons can’t guard inside. Like, at all. The Aggies, led by Queta and forward Justin Bean, can pretty much guard anyone. And also score.

“The more physical team will win that game (Thursday),” Otzelberger said. “We have a lot of respect for the program, the coaches, the players. Their front line is terrific, probably as good or better than anyone in the league. We know what we’re up against.”

UNLV hasn’t defeated a higher seeded opponent in the conference tournament since 2012-13. It’s a tall order. Taller than the mountain that is Queta.

Translation: His voice might be shot, but Otzelberger just might need to swim the English Channel while guiding his players through this one.