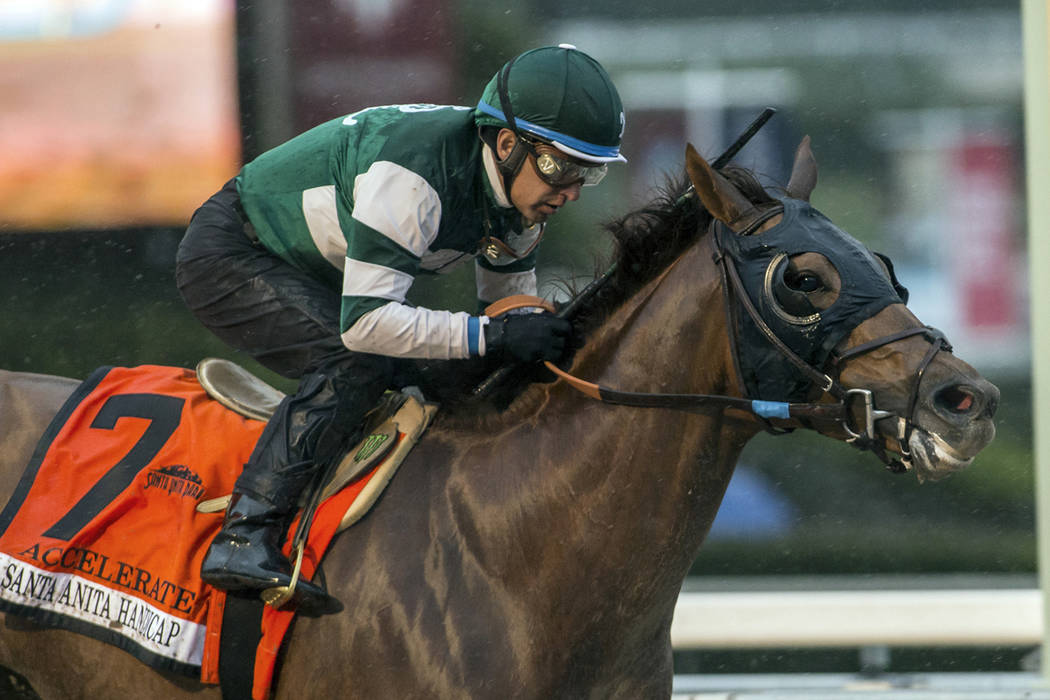 As the seasons turn, so, too, do the handicappers.

With the first day of fall on Sept. 23 about two weeks away, that means the Breeders’ Cup is also drawing near.

The advantage of taking an early look at how the various championship races to be run Nov. 3 and 4 at Churchill Downs are shaping up is that we’ll have a baseline to compare against when they arrive. That can help identify underlays and overlays based on successes or setbacks that occur in the next eight weeks and overly influence perceptions on race day.

This week we’ll look at the early contenders for the $6 million Classic.

Accelerate has stamped himself as the clear leader of the older horses at the classic distance on the dirt. Most recently, he was a romping 12½-length winner of the Pacific Classic on Aug. 18 at Del Mar. He also has racked up victories in the Santa Anita and Gold Cup handicaps, both Grade 1s, and the Grade 2 San Pasqual Stakes. The John Sadler-trained 5-year-old son of Lookin at Lucky is expected to have his final prep for the Classic in the Awesome Again Stakes on Sept. 29 at Santa Anita.

But other older horses such as Diversify, winner of the Whitney Stakes at Saratoga on Aug. 4, and Yoshida, who came from far back to win the Woodward Stakes on closing weekend at the Spa, also are in the conversation.

And Bob Baffert might have a say in the outcome of the Classic, with West Coast and Collected back in training.

Catholic Boy, meanwhile, has moved to the head of the 3-year-old division with the retirement of Triple Crown winner Justify and his defeat of Bravazo, Good Magic, Gronkowski and other top colts in the Travers Stakes at Saratoga on Aug. 25. The versatile Jonathan Thomas-trained colt, who owns Grade 1 victories on dirt and turf, is expected to make one more start, to be determined, before the Classic.

Good Magic is sidelined at the moment after his disappointing next-to-last-place finish in the Travers, but is assured of a spot in the Classic starting gate if he checks out sound by virtue of his victory in the Haskell Invitational at Monmouth Park on July 29.

Also in play are McKinzie and Hofburg, both on the comeback trail and bound for the Pennsylvania Derby on Sept. 22.

The accompanying chart has my top nine contenders at this juncture in order of preference. I’ll undoubtedly shuffle the list in the coming weeks, but this gives me something to review at the last minute to make sure I haven’t overlooked a logical contender in the heat of the handicapping battle.

The #RJhorseracing handicappers venture to Franklin, Kentucky, this week to partake in the unique turf racing presented for just five days each year at Kentucky Downs.

In the former, a Grade 3 6½-furlong dash for 3-year-olds and up, the crew believes that White Flag, 6-1 on the morning line, will refuse to surrender to his rivals, while Blind Ambition (9-2) and Proforma (20-1) complete the trifecta.

For once, I’m almost in complete agreement, though I have Master Merion (6-1) in the third slot.

In the Turf Cup, a 1½-mile marathon for 3-year-olds and up, the ’capping crew is firmly in the corner of 7-2 morning line favorite Oscar Nominated, who won this race last year and is 2-for-2 at Kentucky Downs. They see Arklow (12-1) and Nessy (15-1) besting the others.

I agree that Oscar Nominated is the horse to beat, but I’ll try with Bigger Picture (9-2), who got hit in the eye by a rival rider’s whip in his last race, the Grade 1 Sword Dancer at Saratoga, according to his trainer, Michael Maker. I have Oscar Nominated second and Arklow third.