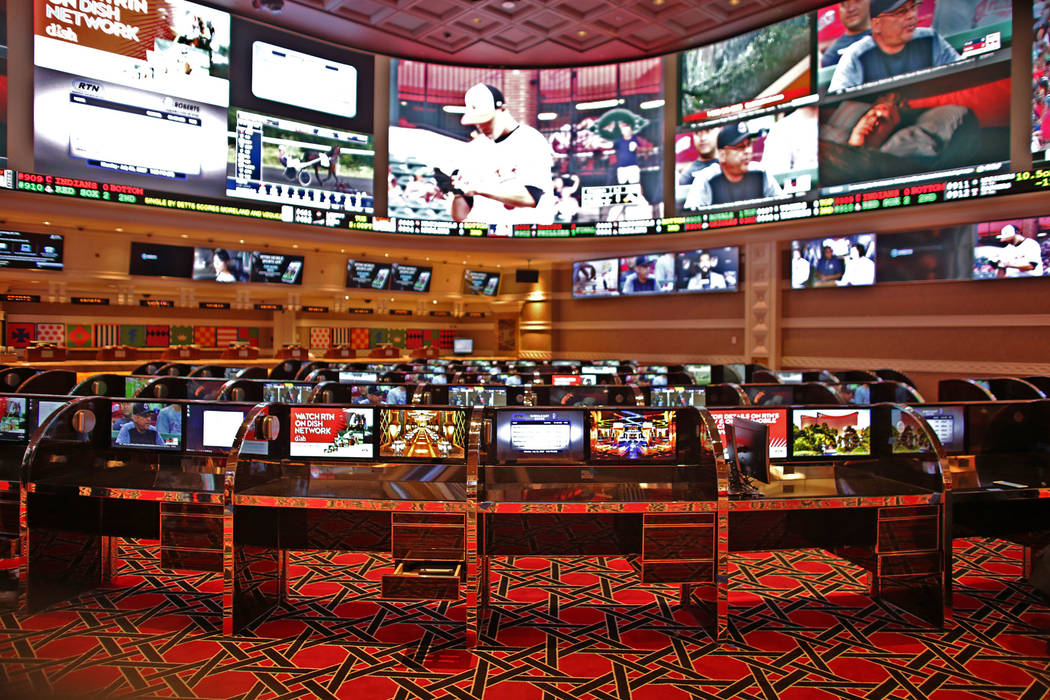 The new race and sports book at the Wynn on Monday, July 31, 2017, in Las Vegas. There are new screens, seats and carpet. Rachel Aston Las Vegas Review-Journal @rookie__rae 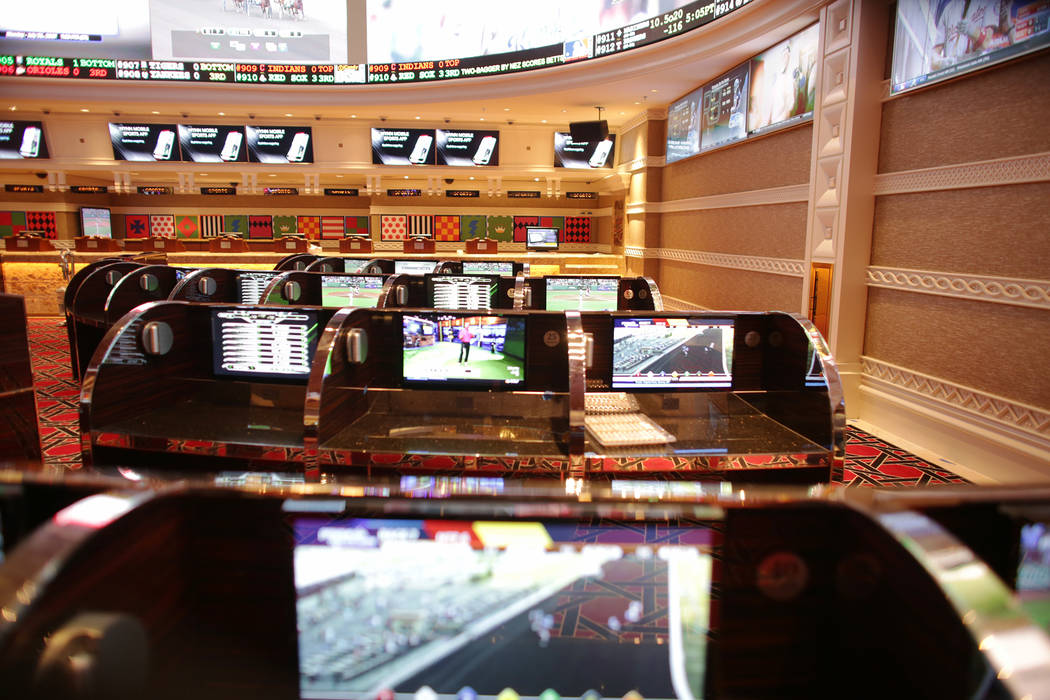 The carrels at the new race and sports book at the Wynn on Monday, July 31, 2017, in Las Vegas. There are new screens, seats and carpet. Rachel Aston Las Vegas Review-Journal @rookie__rae 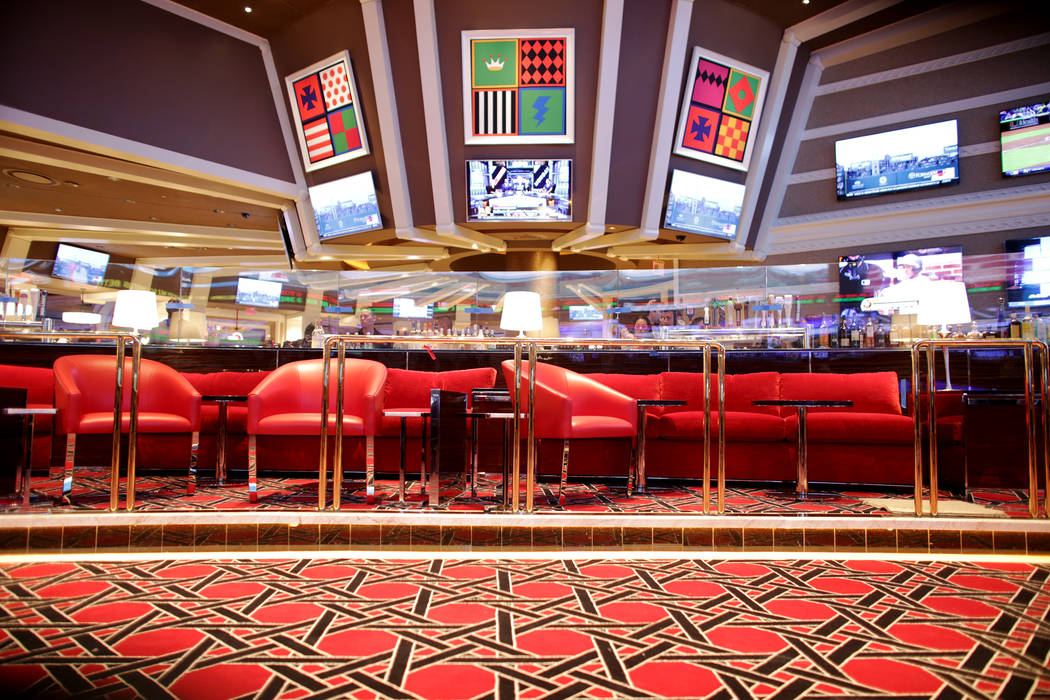 The VIP area at the new race and sports book at the Wynn on Monday, July 31, 2017, in Las Vegas.There are new screens, seats, carpet and a new bar. Rachel Aston Las Vegas Review-Journal @rookie__rae 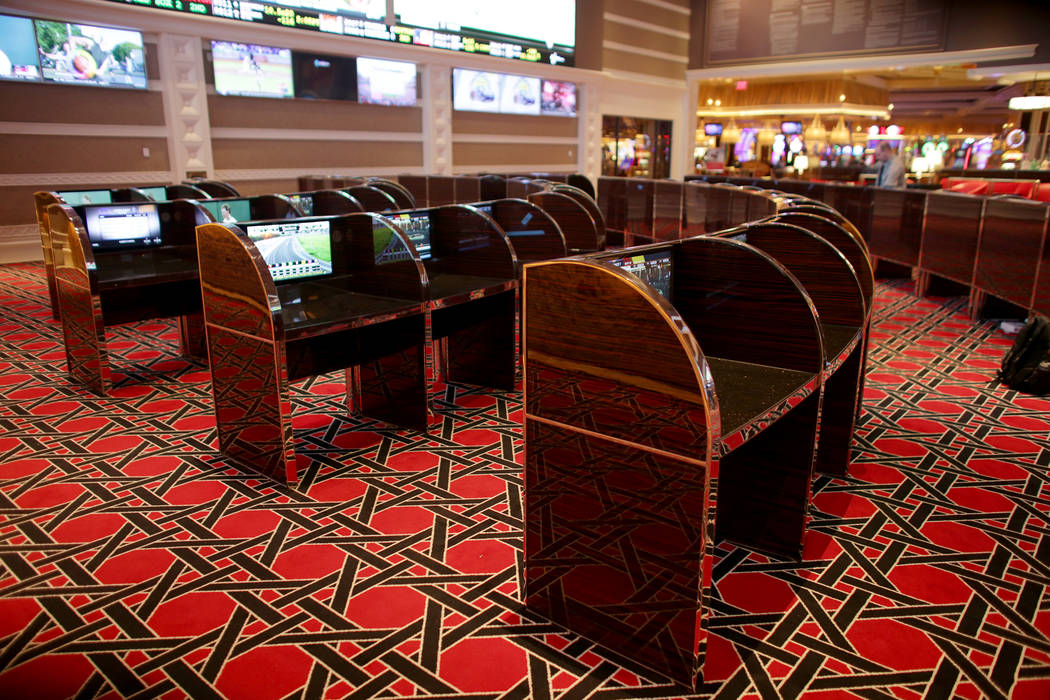 The carrels at the new race and sports book at the Wynn on Monday, July 31, 2017, in Las Vegas.There are new screens, seats and carpet. Rachel Aston Las Vegas Review-Journal @rookie__rae 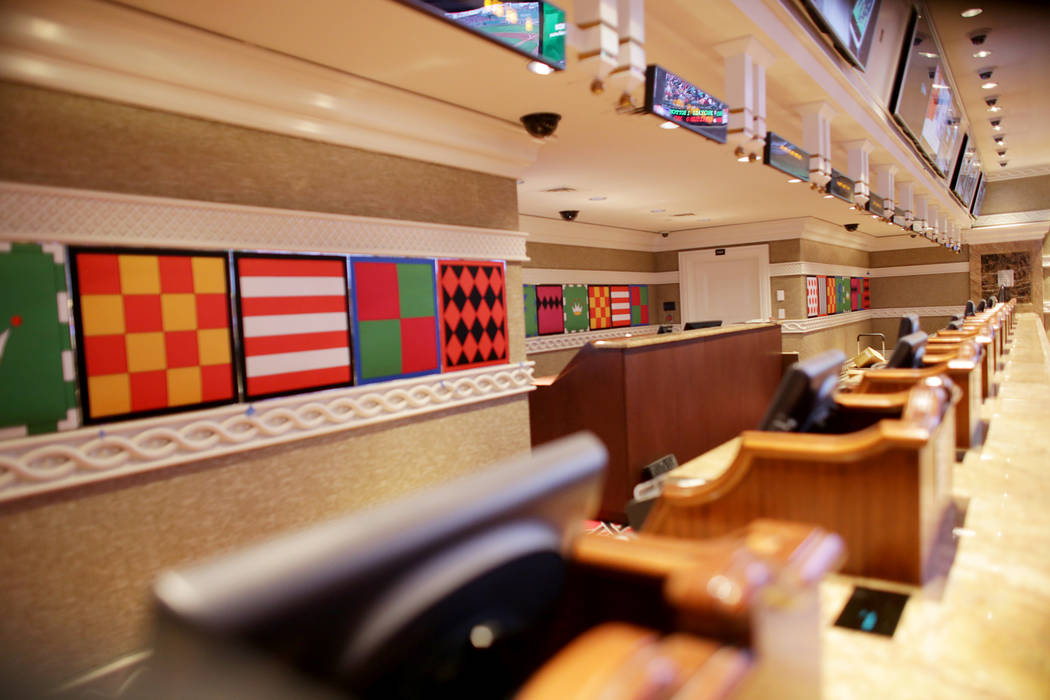 The betting desks at the new race and sports book at the Wynn on Monday, July 31, 2017, in Las Vegas. Behind the counter are new high chromatic jockey silks. There are new screens, seats and carpet. Rachel Aston Las Vegas Review-Journal @rookie__rae

The landscape of Las Vegas horse racing handicapping tournaments continues to shift with the disappearance of a local mainstay – the Wynn Handicapping Challenge.

The multi-day $200,000-guaranteed summer tournament at Wynn Las Vegas had a relatively steep entry fee of $2,000, but offered players the chance to win big money.

It’s not clear why the tournament, which drew more than 240 players last year, was canceled. A Wynn representative confirmed it was not on the calendar this summer but directed all other questions to racebook director John Avello, who could not be reached for comment on Wednesday or Thursday.

In the meantime, deep-pocket players are lamenting the loss of the tournament.

Longtime handicapping tournament player David Gutfreund, better known as “The Maven,” tweeted recently that “with the disappearance of this event and the Spa’s contest drastically changing, gone are the days of dreaming of a six-figure score for $1,000.”

Hearing that the Wynn Handicapping Challenge was no more made me wonder if the other remaining big local handicapping tournaments at the Orleans might also be on the endangered list, but Bob Scucci, racebook manager for the Boyd Group, assures me that’s not the case.

Scucci said he couldn’t comment on the Wynn’s decision, but said increasing competition from racetrack-sponsored handicapping contests has chipped away at the casino contests. The former “often offer live-money contests vs. the mythical bets as we do,” he said, explaining that the casinos are unable to do that “because of some restrictions from the Tote companies and the wagering platform.”

I thought that the growing popularity of online handicapping contests might also be undercutting the live events, but Scucci believes they have the opposite effect.

“We found that they add to the interest, particularly the online qualifiers for our events,” he said.

If it’s Arlington Million weekend, and it is, then you know where you’re going to find the #RJhorseracing handicappers.

In the former, the gang likes 2-1 morning line favorite Analyze It over Sniper Kitten (12-1) and local hope Captivating Moon (20-1).

I agree that Analyze It is the horse to beat, but will take a shot with Bandua (20-1). The colt’s trainer, Irishman Dermot Weld, has successfully poached a number of graded stakes races in the U.S. over the years and I think this Calumet Farms color-bearer is capable of springing the upset. I’ll use Analyze It and Sniper Kitten to fill out the trifecta.

In the Million, the crowd ‘cappers are taking a stand with Spring Quality (8-1) over 3-1 morning line favorite Oscar Performance and Almanaar (5-1), who were tied for second.

“Loves turf. Reborn,” wrote Les Izmore of the group’s choice, referring to the improvement the 6-year-old when he was switched to the lawn last year.

I think Oscar Performance is in the driver’s seat in the race off his excellent comeback race in the Poker Handicap and 2-for-2 record at the distance. I have Spring Quality and Almanaar in the lesser spots.

Drop me an email or follow me on Twitter if you’d like to join our group as we seek out the most challenging handicapping puzzles we can find.