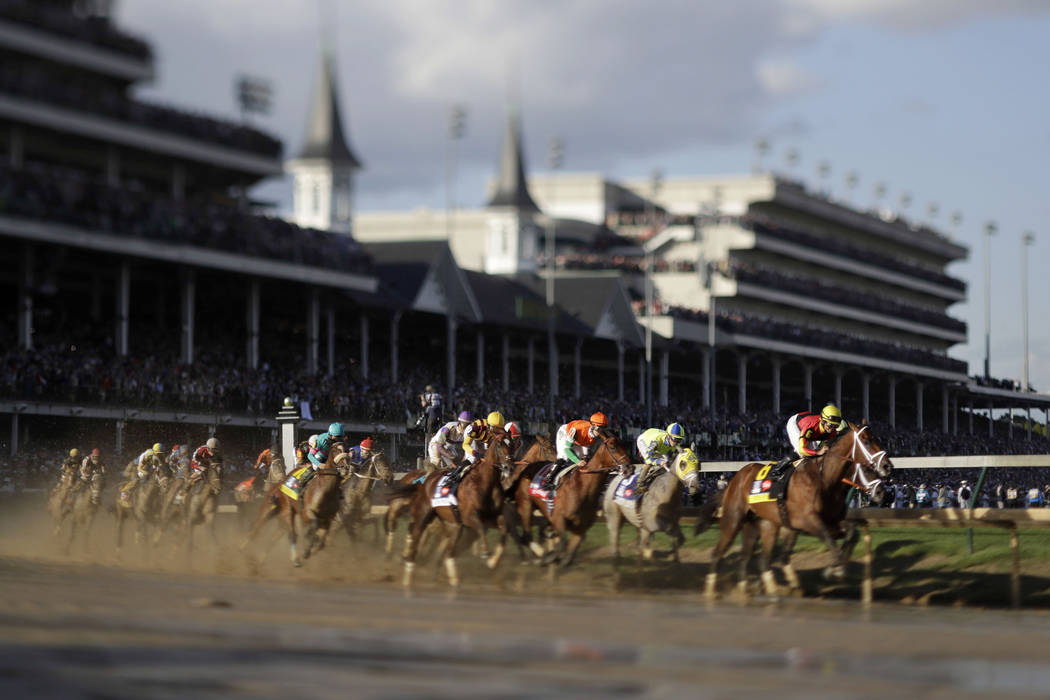 In this image made with a tilt-shift lens, John Velazquez rides Always Dreaming to victory in the 143rd running of the Kentucky Derby horse race at Churchill Downs Saturday, May 6, 2017, in Louisville, Ky. (AP Photo/Matt Slocum)

With just six weeks until the Kentucky Derby, give or take a day, most horses being aimed for the race are going to run just once more to try to secure a spot in the starting gates. There was a time when that wouldn’t have been a given, but with the lighter preparations for Derby candidates in recent years that’s likely how it will go.

That means you need to pay close attention to the next round of Derby preps – beginning with this weekend’s Louisiana and Sunland derbies — whether you’re a hard-core handicapper or a casual fan. (The #RJhorseracing handicappers are all over the Louisiana Derby, as well as the Fair Grounds Oaks. Keep reading to see how they see the races.)

It also means it’s time to take another look at the Derby leaderboard, as that determines which 20 horses end up running in Kentucky.

The points system also could have an impact on how these late preps are run. Case in point:

In the Louisiana Derby at the Fair Grounds on Saturday, My Boy Jack, Noble Indy and Snapper Sinclair — three of the race’s four top contenders — are legitimate Triple Crown prospects. But they’re going to be left on the outside looking in if they don’t run well right now, with the final points cutoff this year likely to be in the high 20s to low 30s.

Snapper Sinclair, with 22 points, is 13th on the leaderboard, but that total isn’t likely to hold up, with the late prep races that award big points.

My Boy Jack (12 points) and Noble Indy (10 points) are in more precarious positions. The former is No. 20 on the points list and the latter is 26th.

That means their trainers need to have them ready to run good enough in Louisiana to earn points – a fourth would likely do, but third would be safer — but still have gas in the tank for the first Saturday in May.

Bravazo, on the other hand, the co-second choice on the morning line at 7-2, already has 54 qualifying points, plenty to ensure a start in Kentucky. Do you think D. Wayne Lukas is going to tell jockey Gary Stevens to try to win the Louisiana Derby at all costs? I don’t. I think he’ll run a solid race and probably hit the board, but I don’t see him winning unless the race falls into his lap.

If he doesn’t win, though, don’t downgrade his chances in Louisville. Instead figure that Coach Lukas has his eyes on the big prize.

The #RJhorseracing handicappers advance down the road to the Triple Crown with the $1 million, Grade 2 Louisiana Derby, but also dive into the 3-year-old fillies division via the Fair Grounds Oaks, also a Grade 2 race.

In the Grade 2 Oaks, a 1 1/16th-mile race immediately preceding the Louisiana Derby, the crowd ‘cappers give 3-1 second choice Wonder Gadot the narrowest of edges over 5-2 morning line favorite Classy Act, with Eskimo Kisses (9-2) the pick for third. I’ll put a few doubloons on long shot Patrona Margarita (10-1), who will need to improve in her second start off a layoff, and box her in an exacta with Classy Act and Wonder Gadot.

In the Louisiana Derby, run at 1 1/8th mile, the handicappers are siding with My Boy Jack, the 5-2 morning line favorite, but only narrowly over Bravazo and Noble Indy, co-second choices at 7-2.

“Faced tougher in SoCal and drilled solid field in the Southwest Stakes at Oaklawn,” wrote handicapper Carlo “TheIronHorse” Campanella, playing along on Twitter.

I like Noble Indy to resume his winning ways with the addition of blinkers.

Join the fun next week by emailing me or following me on Twitter and letting me know you’d like to get involved.