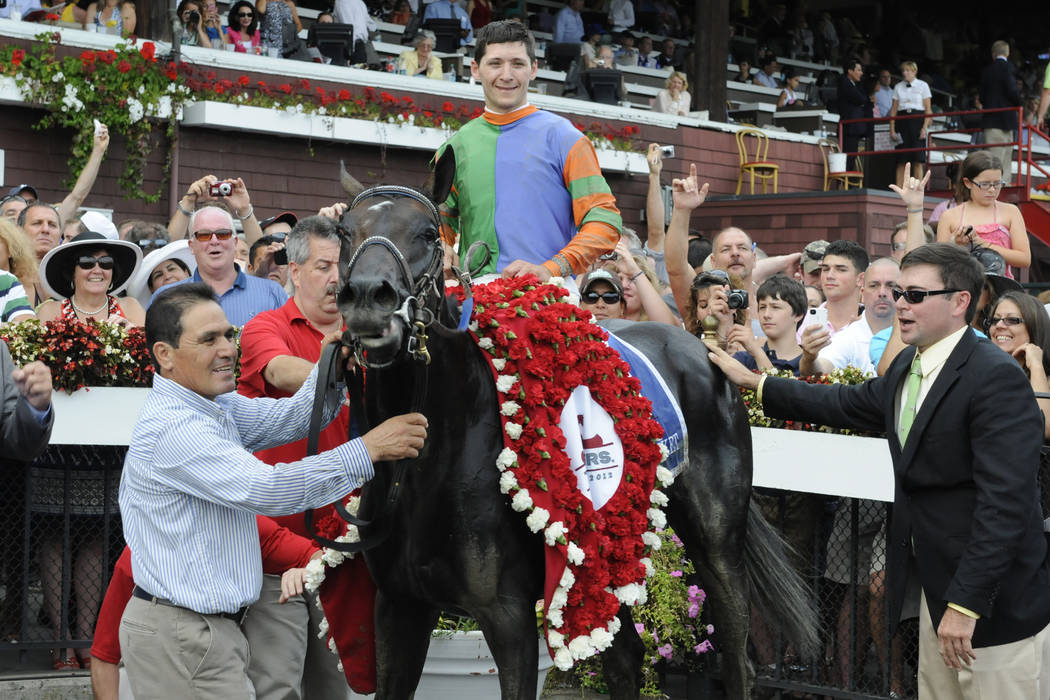 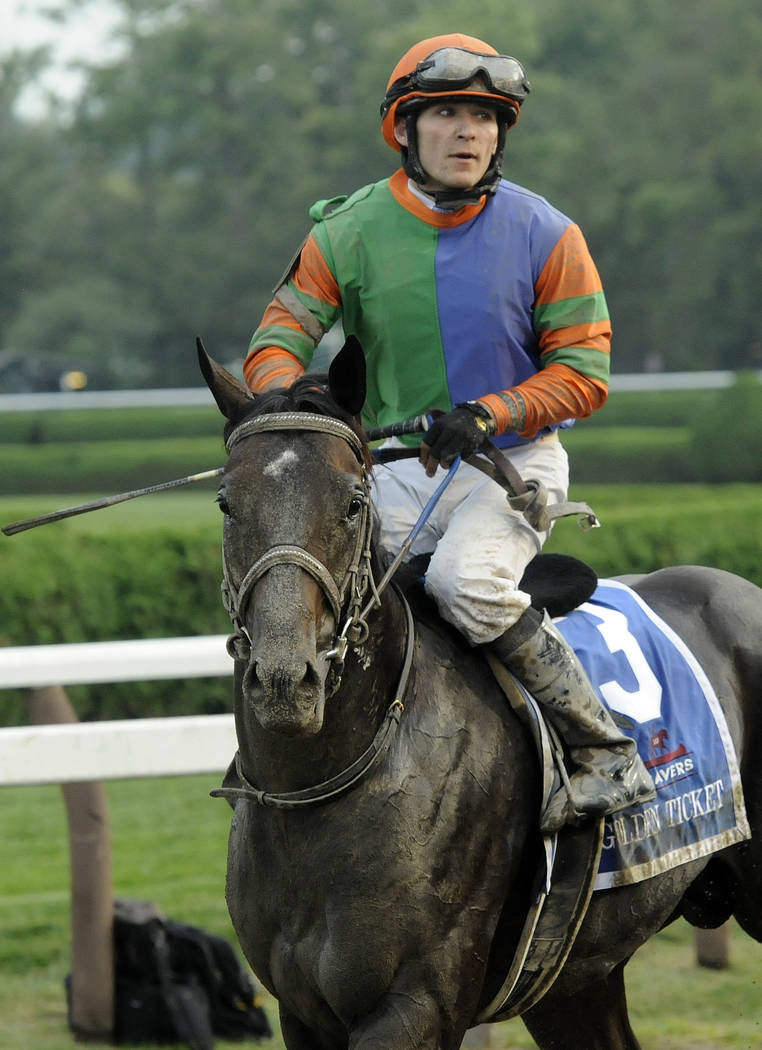 Golden Ticket with Jockey David Cohen after finishing in a dead heat with Alpha and Jockey Ramon Dominguez, as they both win the Travers Stakes horse race at Saratoga Race Course in Saratoga Springs, N.Y., Saturday, Aug. 25, 2012. (AP Photo/Hans Pennink) 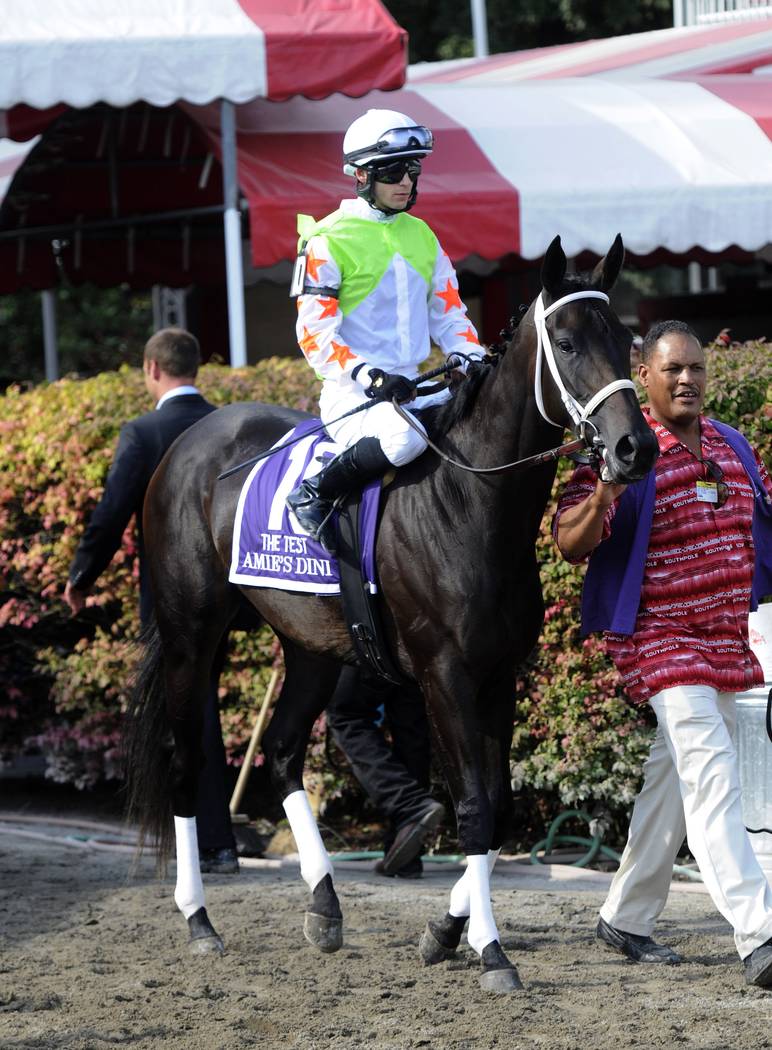 It was a long and difficult journey, but David Cohen came home to Las Vegas this week to pick up some well-deserved hardware.

Cohen, 34, who lived in Las Vegas for more than a decade in his youth and graduated from Bonanza High School, returned early this week to collect the Comeback Jockey of the Year Award at the annual Jockeys’ Guild Assembly.

The award honored Cohen, who rides regularly on the tough New York circuit and in the Midwest, for an excellent 2018 in which he has won 109 races and almost $6.5 million through last Friday.

That followed a break of almost four years that started when he was kicked in his lower right leg by his mount in the paddock at Aqueduct on Feb. 1, 2014, fracturing his fibula and tibia. He briefly returned to the saddle late that year, but was quickly found to have a torn meniscus in his right knee that sent him to the sidelines again.

But the physical injuries were much quicker to heal than the scars left by the deaths of his father, longtime owner and breeder Morry Cohen, and sister Dana during his recuperation.

“For me, the injury was the easiest to come back from,” Cohen said Thursday. “… My father was my best friend, and my sister was probably my second closest. And any athlete, if you don’t have the right state of mind, it will be very easily visible.”

But Cohen, who learned his craft in Southern California after initially thinking he would go into training, worked through his grief, knowing it wouldn’t be fair to the owners and trainers and their teams to rush back before he was mentally prepared. And when he returned to riding late last year, that patience quickly began paying dividends.

Bill Castle, Cohen’s agent, said that is a testament to his rider’s mental toughness as well as his physical skills.

“You don’t see that, coming back after 3½, four years away, for any athlete,” Castle said.

Cohen said the award, bestowed by a panel of his peers, means a lot to him.

“To be recognized in anything when it comes to horse racing, when there are so many other great people out there, especially from your peers, is an incredible honor,” he said.

The #RJhorseracing handicappers liked last week’s Clasico de Caribe at Gulfstream Park so much that they decided to spend another week playing the Hallandale, Florida, oval.

In the My Charmer, the crowd ’cappers are putting their faith in La Moneda, a Thomas Morley-trained mare who had a four-race win streak snapped in her last start and is the third choice on the morning line at 5-1. They have Bellavais (4-1) and favored Capla Temptress (7-2) filling out the trifecta.

I think Capla Temptress, a Grade 1 winner at this trip, looks tough to beat and will use her over La Moneda and Special Event (8-1).

In the Fort Lauderdale, the crew is again edging a little ways out on a limb with Qurbaan (5-1), over Mr Havercamp (15-1), with Projected (the 4-1 morning line favorite) and Blacktype (12-1) deadlocked for third.

Handicapper Les Izmore succinctly captures the group’s sentiment of the favorite: “Both recent races excellent; both stronger races; will be closing; Jersey Joe (Bravo); tough when money down.”

I think the key to this wide-open race is two horses exiting the Breeders’ Cup Mile — Almanaar (10-1) and Divisidero (6-1). Divisidero ran the better race that day, but his lone try showing at Gulfstream Park wasn’t good. And Almanaar never got a chance to run last time, when he was in tight early and had traffic trouble at several other points in the race.