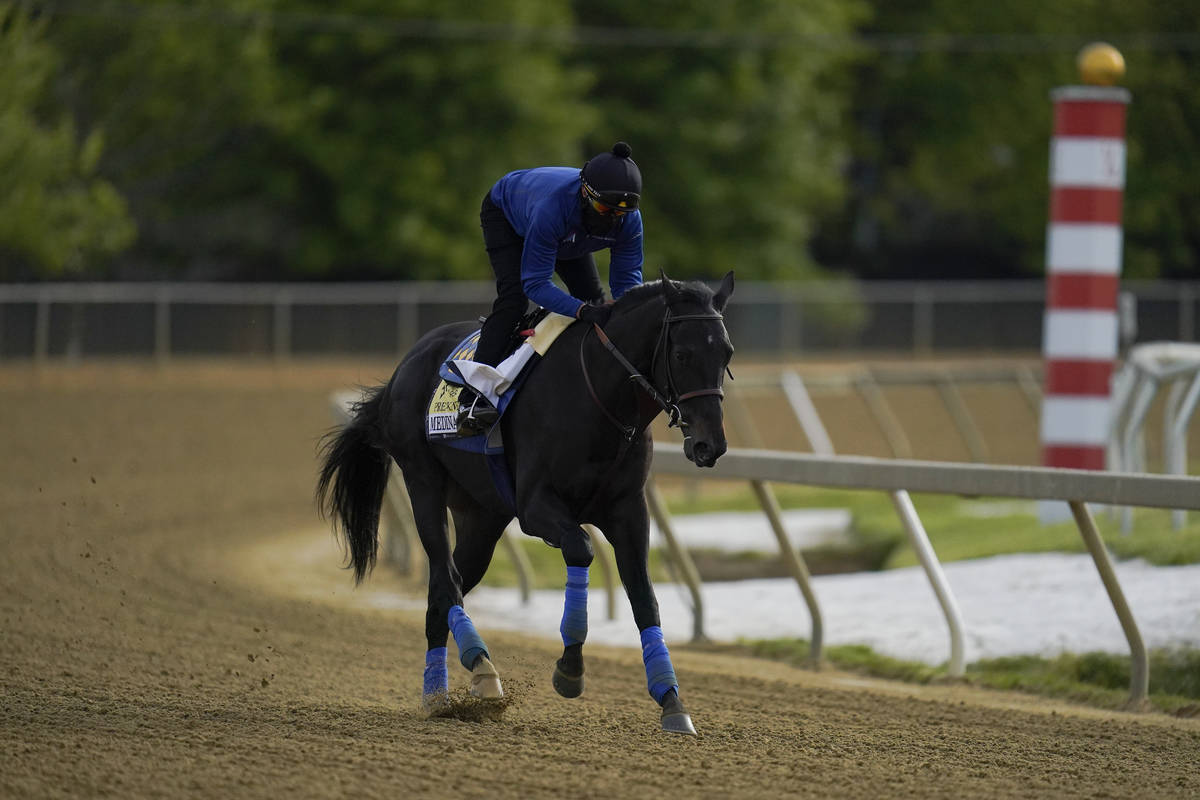 Exercise rider Humberto Gomez takes Kentucky Derby winner and Preakness entrant Medina Spirit over the track during a training session ahead of the Preakness Stakes at Pimlico Race Course, Wednesday, May 12, 2021, in Baltimore. (AP Photo/Julio Cortez)

Train wreck at Old Hilltop sounds like a great title for a country song, but sadly we are talking about a story that has cast a cloud over Saturday’s Preakness Stakes, the storied second leg of the Triple Crown.

As you have heard by now, Kentucky Derby winner Medina Spirit, trained by Hall of Famer Bob Baffert, tested positive for the drug betamethasone after capturing the Run for the Roses on May 1.

Betamethasone is a legal therapeutic corticosteroid administered to relieve joint inflammation. But while it’s OK to use during training in many jurisdictions, it cannot be present – even at minute levels – when the horse is entered to race.

That’s what we’re talking about here, with Medina Spirit’s post-race blood sample showing 21 picograms (trillionths of a gram) of the drug per milliliter of blood.

Churchill Downs suspended Baffert from entering any horses at the track until the matter is resolved and said it will strip Medina Spirit of his Derby victory if tests on a “split sample” confirm the positive.

But The Stronach Group, owner of Pimlico Race Course (aka Old Hilltop), and Maryland racing officials decided to allow Baffert to enter the colt in the $1 million Preakness under “rigorous conditions,” including “full transparency of medical and testing results that will allow for all results to be released to the public.”

Baffert has proclaimed his innocence, arguing that the horse had never been treated with the drug, but later amending that to say it was discovered that his team used a topical anti-fungal cream containing betamethasone to treat a skin condition on Medina Spirit’s hindquarters.

While the case likely will take weeks if not months or years to sort out, Baffert now will be able to run Medina Spirit in the 10-horse Preakness field along with highly regarded stablemate Concert Tour.

While the presence of betamethasone is grounds for a DQ in Kentucky, that doesn’t mean that Baffert was cheating or that Medina Spirit had an unfair edge over the Derby competition, according C. Wayne McIlwraith, the founder of the Orthopaedic Research Center at Colorado State and likely the world’s leading expert on the effects of steroids on racehorses.

The levels of betamethasone found in Medina Spirit’s system would not have enhanced the colt’s performance, he said. He speculated before Baffert’s announcement about the skin cream that such levels could be caused by accidental contamination through the use of other products containing betamethasone.

McIlwraith also highlighted an issue with the increasing sensitivity of laboratory tests, which are capable of producing positives for almost infinitesimal traces of substances banned from race-day use.

“It’s not deliberate. It’s not affecting performance, but it still gets categorized as serious doping,” McIlwraith said.

We’ll return to the subject soon. I expect Medina Spirit to win the Preakness, setting the stage for more drama before the Belmont Stakes on June 5. He might even be a halfway decent price as Derby winners go, if casual fans steer clear because of the “doping” accusations leveled at Baffert.