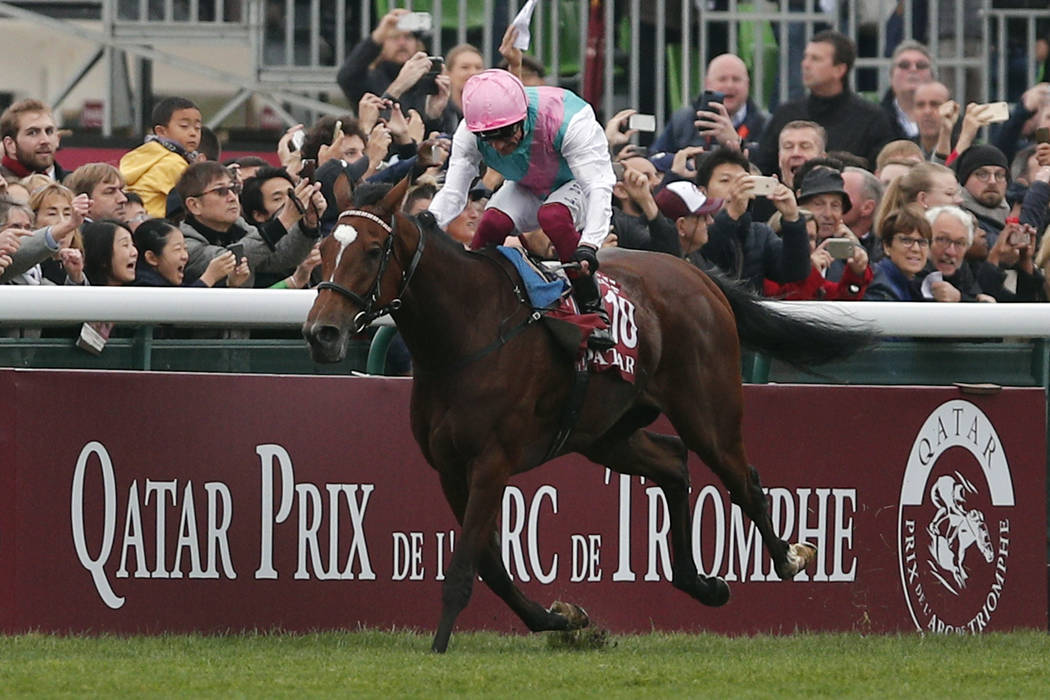 It’s OK to feel sorry for foreign horses that ship to the United States and try to win classic American dirt races like the Kentucky Derby, but don’t shed a tear for European runners who fly in to contest next month’s $4 million Breeders’ Cup Turf at Churchill Downs.

That stat may be padded as the sensational 4-year-old filly Enable, one of just eight horses to win back-to-back runnings of the prestigious Prix de l’Arc de Triomphe in its 98-year history, is expected to run in the 2018 Turf.

Seven Arc winners have tried to complete the trans-Atlantic double, but none has succeeded. Several Arc also-rans have captured the Turf, however.

But Enable has an advantage over the other Arc winners, having raced just once this year prior to the race due to a leg injury. So she should be coming up on her best, whereas the others were at the end of lengthy campaigns.

Trainer John Gosden, who also has top European 3-year-old Roaring Lion in his barn, has not yet committed Enable to the Turf. But he indicated before the Arc that will likely only send one runner over and was leaning toward Enable.

“She began her season only in September, so it makes sense to take a fresh horse out there if she’s in good shape,” he told the Racing Post.

The top American turf marathoners have been taking turns beating one another, but Robert Bruce, a Chilean import, probably deserves the “Best in the U.S.” label at the moment after taking down the Arlington Million before running second in the Joe Hirsch Turf Classic Stakes over a soft Belmont course.

But several other U.S.-based runners could make noise if they bring their A games. They include Arklow, who annexed the Kentucky Turf Cup Stakes at Kentucky Downs; Channel Maker, winner of the Joe Hirsch and a horse who relishes softer turf; Glorious Empire, a 7-year-old former claimer who won the Sword Dancer at Saratoga; Liam the Charmer, winner of the John Henry Turf Championship Stakes at Santa Anita; and the long-fused Sadler’s Joy, who finished third in the Hirsch.

We may pick up another contender in Saturday’s Pattison Canadian International Stakes (Grade 1) at Woodbine, which just happens to be one of our #RJhorseracing featured races this week (see below). At the very least, we’ll have a yardstick to compare European and North American form in Thundering Blue, who has faced some of the top turf runners in Britain this year, including Roaring Lion.

In addition to the $800,000 Canadian International, the intrepid #RJhorseracing handicappers are tackling the $250,000 Nearctic Stakes (Grade 2), a 6-furlong turf dash for 3-year-olds and up.

The handicapping crew considers both races highly competitive based on their ballots.

I’m picking the 3-year-old filly Lady Alexandra (5-1) to beat the boys, figuring she didn’t care for the synthetic surface in her last. I’ve got Holding Gold and long shot Hemp Hemp Hooray (20-1) filling out the top slots.

In the Canadian International, the crowd ‘cappers are narrowly siding with the aforementioned Thundering Blue, the 2-1 morning line favorite, over Johnny Bear (8-1) and Focus Group (10-1).

Join us next week as we search out the most challenging equine puzzles we can find. Just drop me an email or follow me on Twitter and let me know you’d like to get involved.