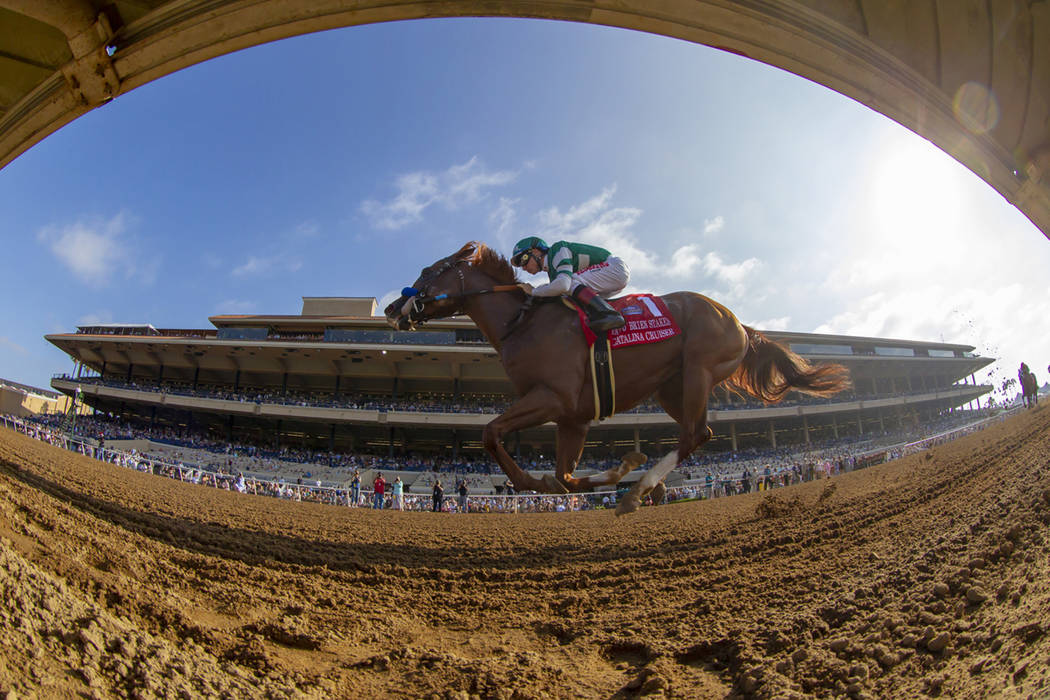 I know you’re not supposed to regret the passing of summer when you live in Las Vegas, but I can’t help feeling a bit wistful when I think about Del Mar and Saratoga wrapping up their seasons with Monday’s Labor Day cards.

Both tracks are going out strong, with Saratoga serving up the Woodward and Spinaway stakes, both Grade 1s, and the Glen Falls (Grade 2) on Saturday, the Prioress (Grade 2) on Sunday and the Hopeful Stakes (Grade 1) and Bernard Baruch Handicap (Grade 2) on Monday.

Both tracks reminded us why they are the gems of the American racing scene this summer. They put on competitive races with mostly full fields day after day and produced many memorable performances.

We also got to watch some new stars emerge, including jockey Drayden Van Dyke, vying for his first riding title at a major meet and threatening the record for stakes victories of 13 at Del Mar, and trainer Jonathan Thomas, who demonstrated the training touch of a savvy veteran in mapping out the campaign of Travers Stakes winner Catholic Boy.

We’ll see what the final numbers show, but I predict both meets will show solid increases in handle.

I could sing a happy song to try to lift my spirits, but instead I’ll focus on the fact that one of my new favorite racetracks – Kentucky Downs – opens Saturday. While I’m not wild about the overlap with the final weekend at Del Mar and Saratoga, this unique racing venue will definitely ease the pangs of their departure next weekend.

For those who aren’t familiar with the track outside Franklin, Kentucky, here’s the 411: The track, formerly known as Dueling Grounds, runs a five-day meet over two consecutive weekends and offers nothing but grass racing over the only European-style course in North America — an undulating 1 5/16-mile course that resembles a bent and stretched paper clip from the air.

Also, because it offers simulcasting and historical horse racing gambling machines year-round, it is able to offer strong purses and attract good horses to its boutique meet. Saturday’s Tourist Mile, for example, boasts a $750,000 purse.

We’ll return to Kentucky Downs next weekend for some handicapping, but first let’s turn to our “get-out” races at Del Mar and Saratoga.

The field for Saturday’s $750,000 Woodward Stakes, a Grade 1 test for 3-year-olds and up at 1⅛ mile on Saratoga’s main track, is not among the best assembled in its 65 runnings, but it could be one of the most evenly matched.

The #RJhorseracing handicappers are narrowly backing the favorite over 9-2 second choice Seeking the Soul, with Leofric (20-1) and Yoshida (5-1) tied for third.

I’ll try my luck with Rally Cry (20-1), who drew a tough outside post but has the right humans in his corner — trainer Todd Pletcher and jockey Mike Smith — to spring the upset. I’ll bet him to win and box him in exactas with Seeking the Soul and Gunnevera.

In contrast, the $200,000 John C. Mabee at Del Mar, which drew 12 horses for the 1⅛-mile turf test for fillies and mares, has a solid favorite in Cambodia, 5-2 on the morning line.

The crowd ’cappers like the chalk here, but there was a surge of support for 7-2 second choice Vasilika, winner of five straight who takes a big step up in class. Cordiality (12-1) was a distant third in the balloting.

While I agree that Cambodia will be tough, I see the sharp filly Fahan Mura (4-1) setting a hot pace and think that could set it up for an off-the-pace runner. I’ll swing for the fences again with Meal Ticket (20-1), who gets tested for class but was impressive winning her prep for this. I see Fahan Mura and Cambodia rounding out the trifecta