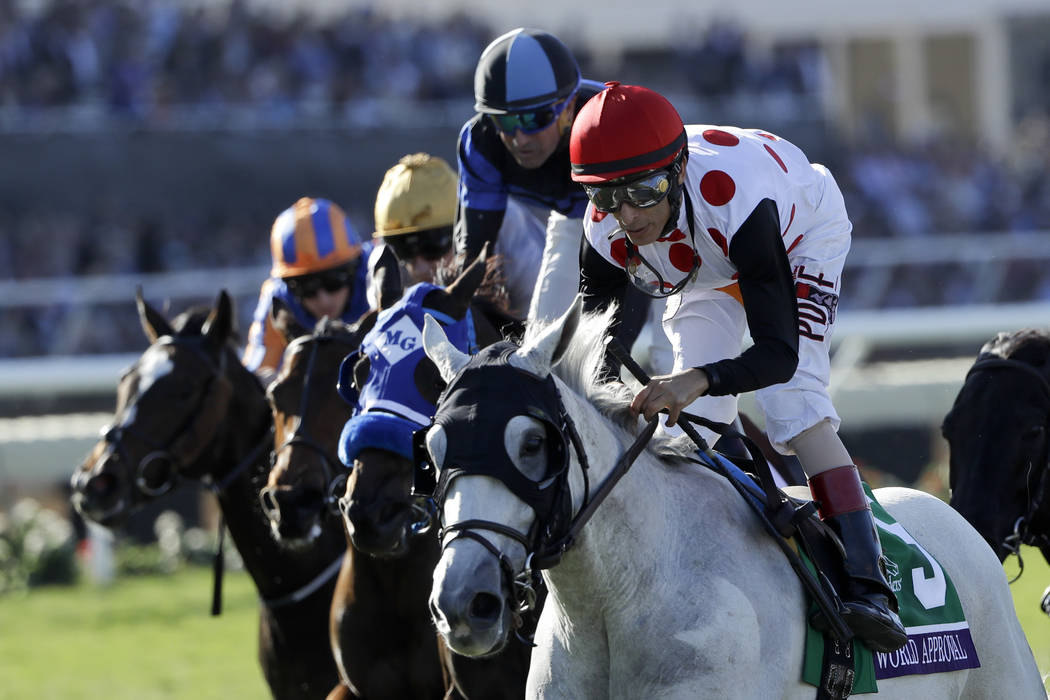 And down the stretch they come! (Tip of the hat to Dave Johnson.)

Prologue will be past after the last two prep races for the Kentucky Derby – the Arkansas Derby and Lexington Stakes – are run on Saturday, leaving handicappers three weeks to make sense of what has been an exhilarating run up to the main event.

We’ll use that time to tear the race apart from various angles and keep you up to speed on the latest developments, but first I thought it worth discussing the annual game of musical saddles that begins about this time each year.

That, in turn, resulted in Javier Castellano, who left Audible behind in Florida when he traveled to Dubai to ride West Coast in the $10 million Dubai World Cup, reclaiming the mount and abandoning Bolt d’Oro. “I feel like I need to be with Todd,” said Castellano, who also has a long and productive relationship with Pletcher.

Enter Victor Espinoza, the only active Triple Crown winning rider, to take over on Bolt d’Oro for trainer Mick Ruiz.

Some social media posters claimed to know that Velazquez prefers the improving Vino Rosso to the brilliant Audible, winner of four straight races.

That could be true, but it’s also possible that Pletcher excused Castellano to ride in Dubai with the understanding that he could reunite with Audible upon his return or that someone in the colt’s ownership group expressed a strong preference for Castellano.

My point is that until Velazquez or Castellano come out and say who did the picking, I’d take note of such changes but not put a lot of stock into the inferences that spring from accepting the initial premise.

The #RJhorseracing handicappers have tackled virtually every Kentucky Derby prep race and they’re not about to quit in the final weekend.

In the 1 1/16th mile, Grade Three Lexington Stakes at Keeneland, the ‘cappers are siding with 5-2 morning line favorite My Boy Jack, who was entered in this race at the last minute because he needs more Kentucky Derby points to ensure he makes the cut for Churchill Downs. They see Pony Up (6-1) and Greyvitos (6-1) as his main threats.

Make mine Greyvitos. He appears to have the speed to dominate in his return from a four-month injury induced layoff. I’ll also use him in an exacta box with My Boy Jack and Zanesville (20-1).

Even though this isn’t the big race on Saturday, comment of the week honors go to Charlie Cronin, also a fan of Greyvitos.

“I didn’t play Patch (the one-eyed horse) last year but like this story better. He survived the San Luis Rey training center fire, recovered from knee surgery, is grey (my personal fave) and hasn’t looked back after breaking his maiden in the Bob Hope,” he wrote. “Fast enough for these, so why not?”

In the Arkansas Derby, a Grade One race at 1 1/18 miles at Oaklawn Park, the crowd ‘cappers like the brilliant Pletcher trainee Magnum Moon, the 8-5 morning line favorite, to run his record to 4-0 by besting Solomini (2-1) and newcomer Tenfold (10-1).

The top two look tough to me as well.

Join us next week as we search for new handicapping challenges outside the 3-year-old ranks. Just email me or hop on Twitter and search for #RJhorseracing if you’d like to get involved.