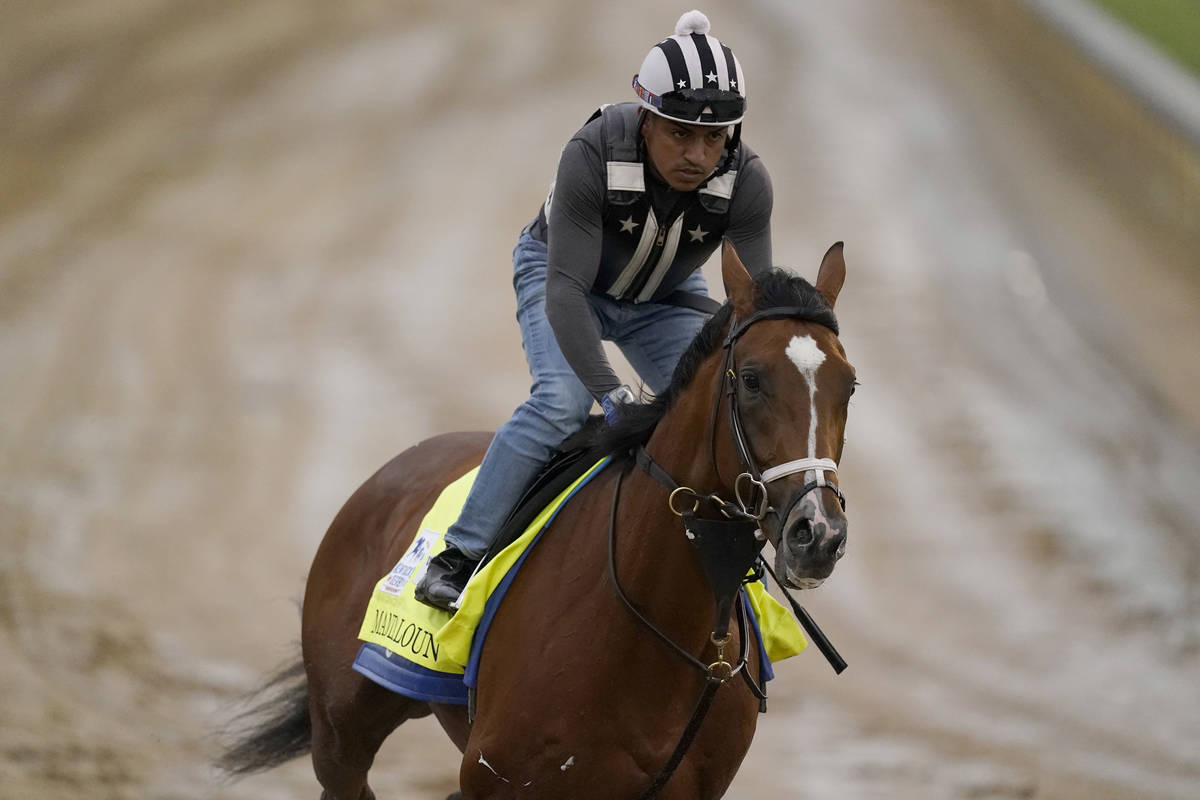 Kentucky Derby entrant Mandaloun works out at Churchill Downs Thursday, April 29, 2021, in Louisville, Ky. The 147th running of the Kentucky Derby is scheduled for Saturday, May 1. (AP Photo/Charlie Riedel) 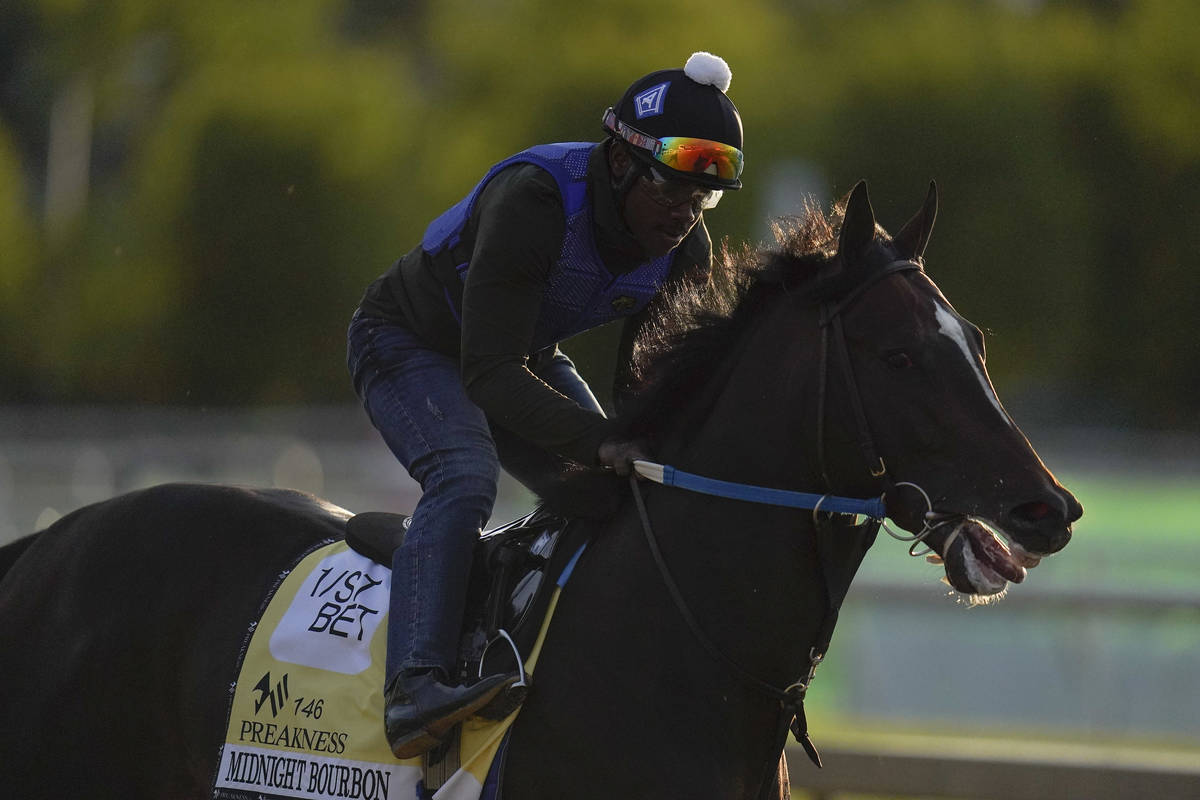 Preakness entrant Midnight Bourbon works out during a training session ahead of the Preakness Stakes horse race at Pimlico Race Course, Wednesday, May 12, 2021, in Baltimore. (AP Photo/Julio Cortez) 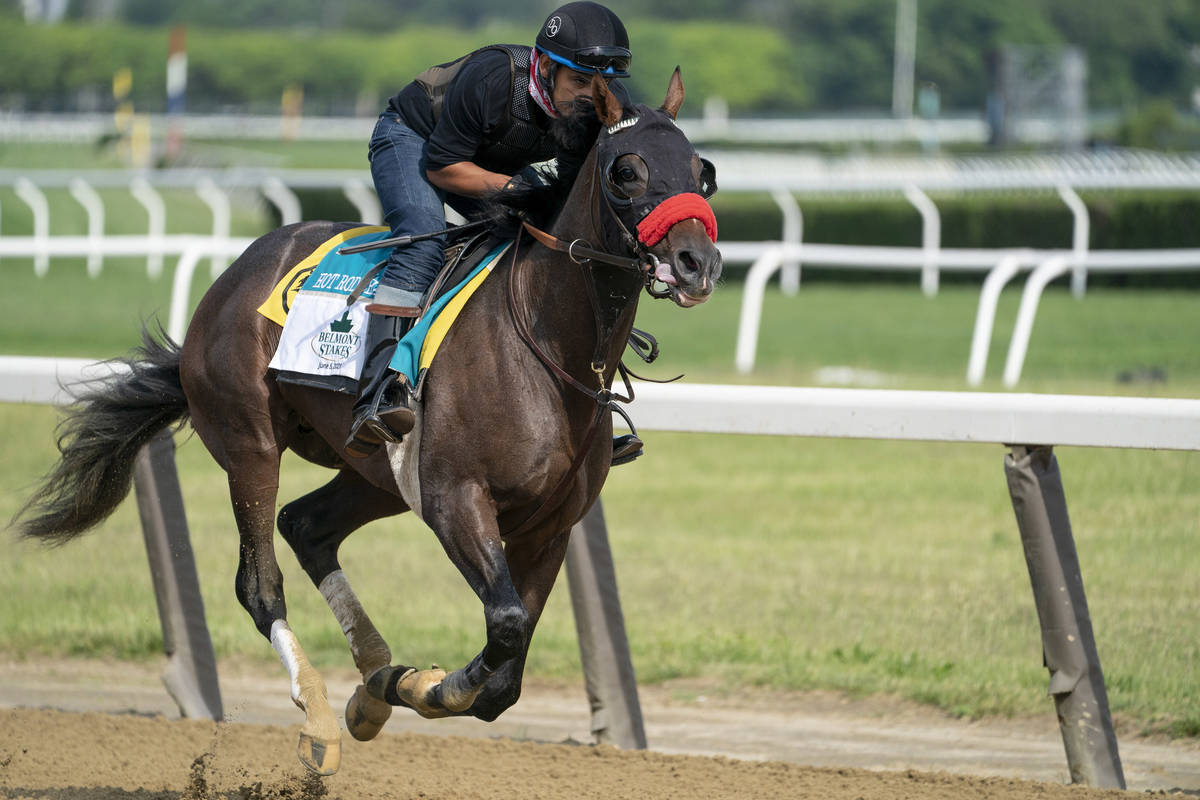 Yes, we’ll be watching racing from Del Mar and Saratoga this weekend, but it’s also time to get reacquainted with the top 3-year-olds as they return to compete for wide-open divisional honors in the second half of the season.

The first stop for several prominent colts you’ll remember from the Triple Crown chase will be Saturday’s $1 million Haskell Invitational at Monmouth Park.

The 1 1/8th-mile race for 3-year-olds, which will be broadcast from 2 to 3 p.m. on KSNV-3, drew a compact field of seven that includes the runners-up from all three Triple Crown races — Hot Rod Charlie (second in the Belmont Stakes), Mandaloun (second in the Kentucky Derby) and Midnight Bourbon (second in the Preakness).

Essential Quality, the Belmont Stakes winner and current division leader in most handicappers’ estimation, will sit out this race in favor of the $600,000 Jim Dandy Stakes on July 31 at Saratoga, where he might face Preakness winner Rombauer for the second time.

His eventual destination, along with many of the other top 3-year-olds, is expected to be the $1.25 million Travers Stakes on Aug. 28, which could go a long way toward settling divisional honors.

Meanwhile, Kentucky Derby “winner” Medina Spirit — still facing a likely disqualification after testing positive for a prohibited substance in postrace testing — was deemed not ready for the Haskell by trainer Bob Baffert. The Hall of Fame trainer has not said where the colt will run next, but he now has additional options that include the Jim Dandy after a federal judge in New York on Wednesday overturned his suspension by the New York Racing Association over the Derby positive and other recent missteps.

Along with being the first major 3-year-old race (sorry, Ohio and Indiana derbies) after the Triple Crown, the Haskell will be one of the most prominent races — along with the Grade 1 United Nations Stakes earlier on the 14-race Monmouth card — to be run under New Jersey’s controversial new “no whip” regulations.

There have been some strange outcomes in Monmouth races under the rule, but another one here could focus heat on the industry to come up with a universal solution that bettors can have confidence in.

As far as the race goes, my money will be on Midnight Bourbon. He’s been knocking at the door since his victory in the Lecomte Stakes and has a favorable pace scenario if new rider Paco Lopez can get him to relax just behind likely pacesetter Following Sea and get first jump on his Triple Crown rivals.

A bit more on the ruling on Baffert’s appeal:

U.S. District Judge Carol Bagley Amon of the Eastern District of New York found that the NYRA’s suspension of the trainer caused him significant harm and rejected the association’s claim that it was entitled to bar the trainer through its private property rights. Because the nonprofit is essentially an arm of the state government, she ruled, the move violated Baffert’s right to due process.

NYRA President and CEO Dave O’Rourke said in a statement that the association is reviewing the ruling “to determine our legal options and next steps.” He also noted that the judge “upheld NYRA’s authority to exclude individuals from its racetracks … (and) rejected Baffert’s argument that NYRA had no legal authority to take the action that it did.”