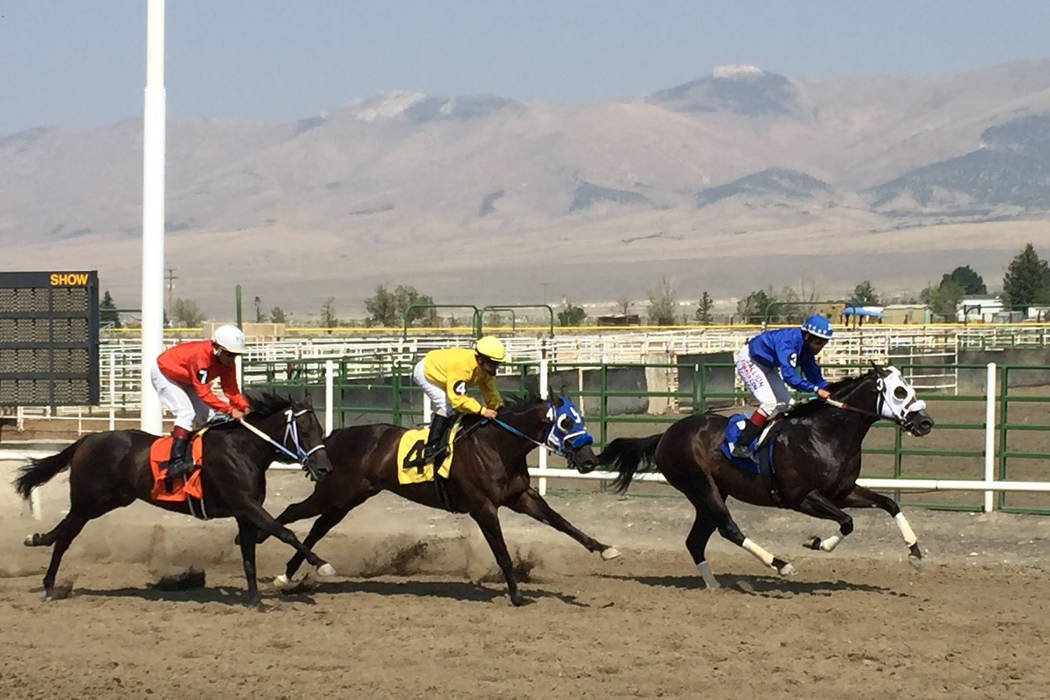 Down the stretch they come at the White Pine Races on Sunday, August 19, 2018 in Ely. (Mike Brunker/Las Vegas Review-Journal) 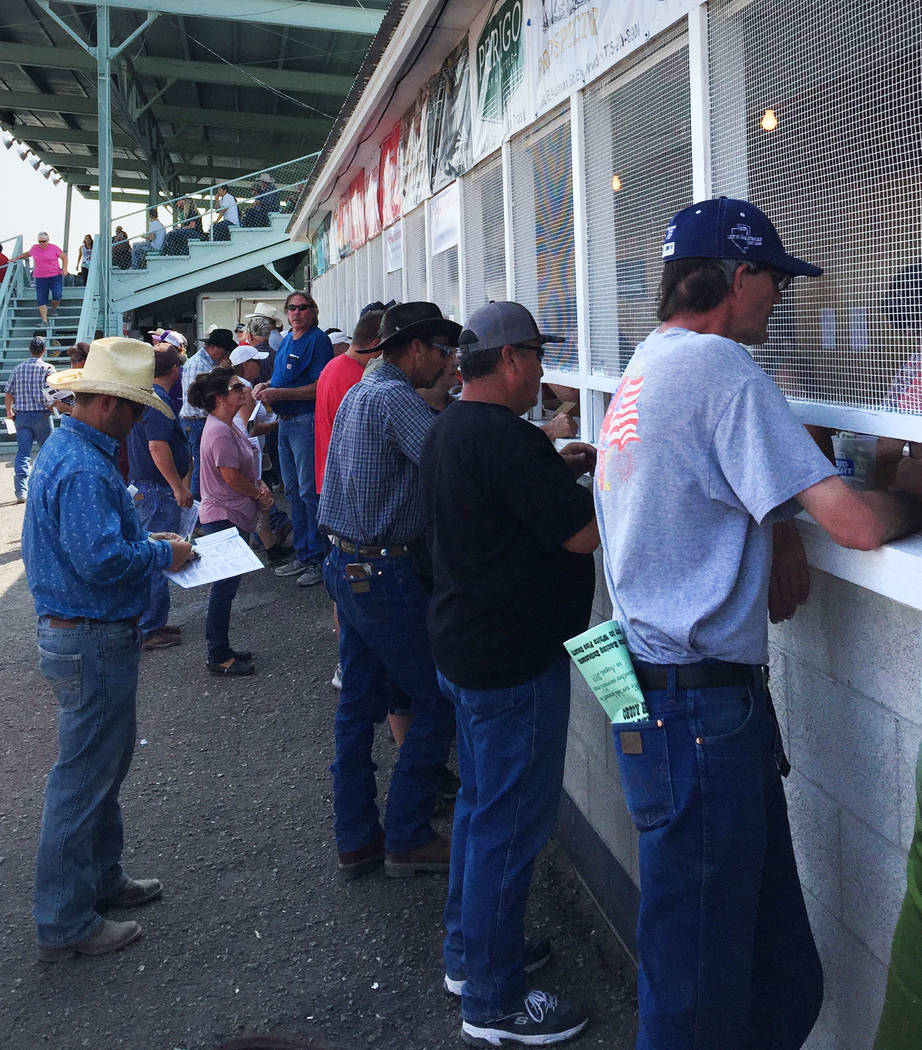 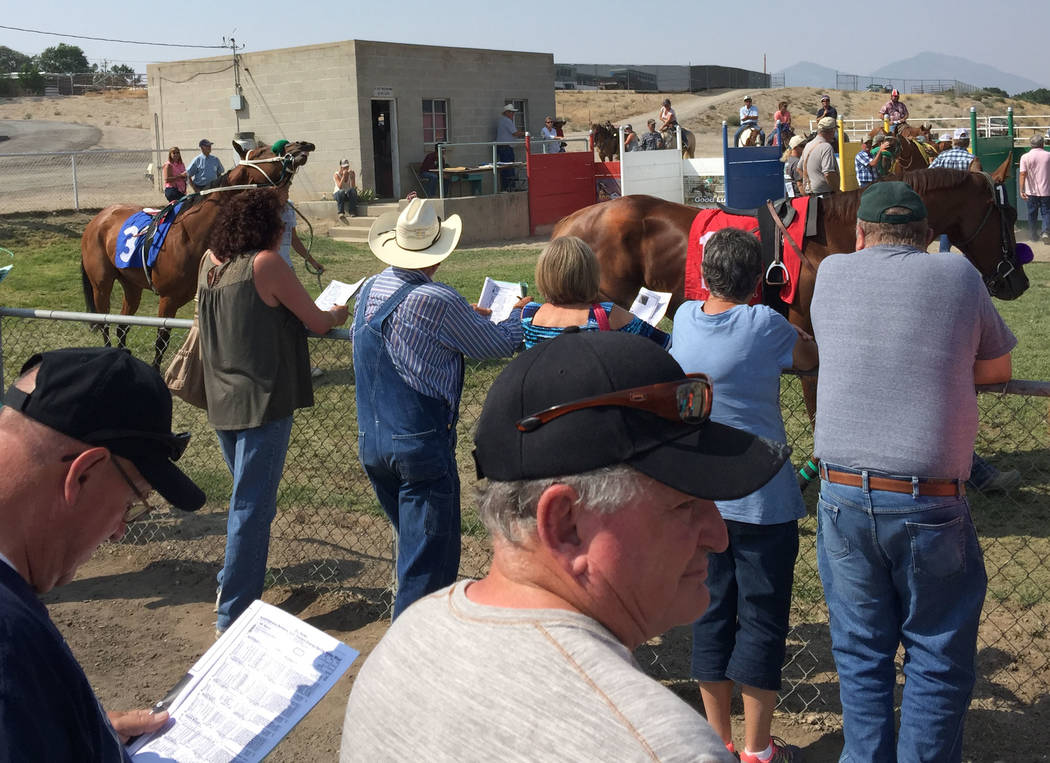 Handicappers study the body language of entrants at the paddock at the White Pine Races on Sunday, August 19, 2018 in Ely. (Mike Brunker/Las Vegas Review-Journal) 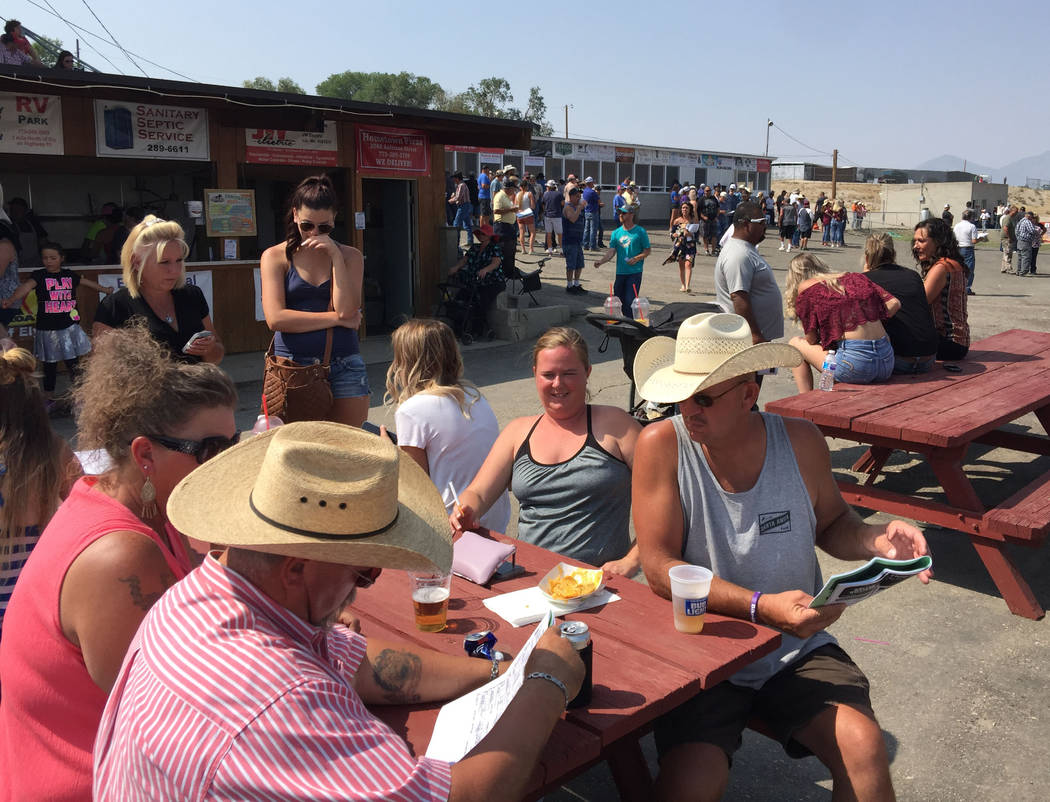 Fans handicap the next race at the White Pine Races on Sunday, August 19, 2018 in Ely. (Mike Brunker/Las Vegas Review-Journal) 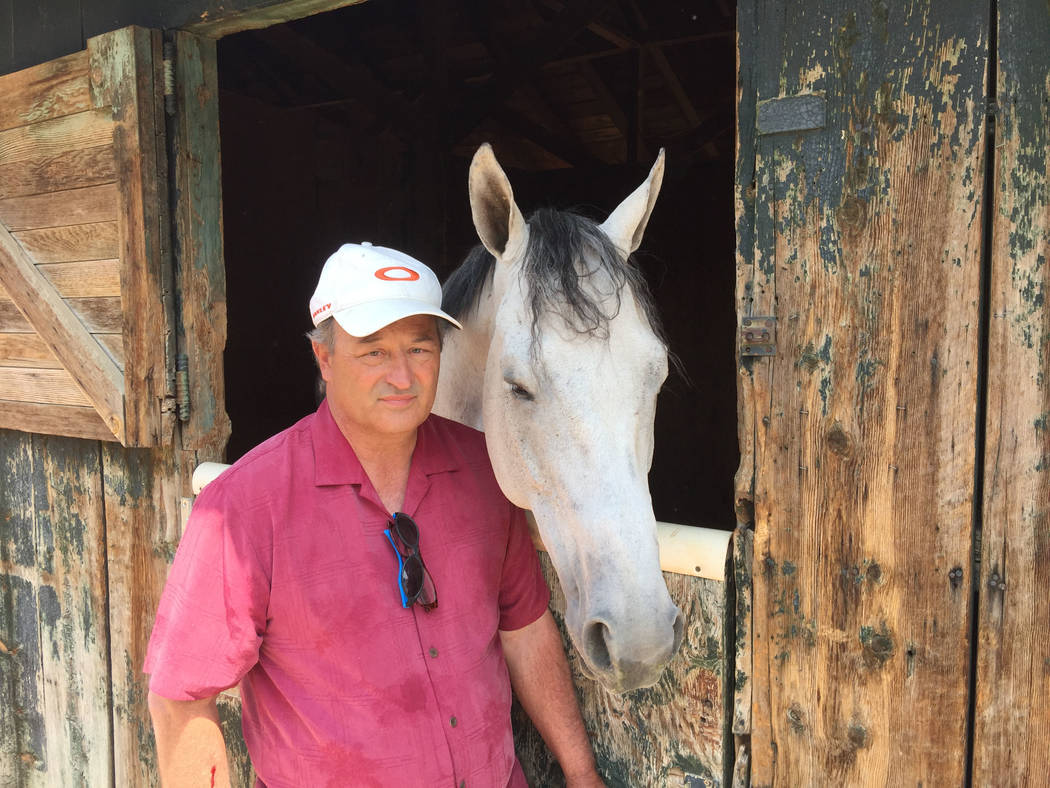 Co-owner Robin Dunn with Generations, a 9-year-old gelding who he says has won 25 straight races, both recognized and unrecognized, at the White Pine Races in Ely. (Mike Brunker/Las Vegas Review-Journal) 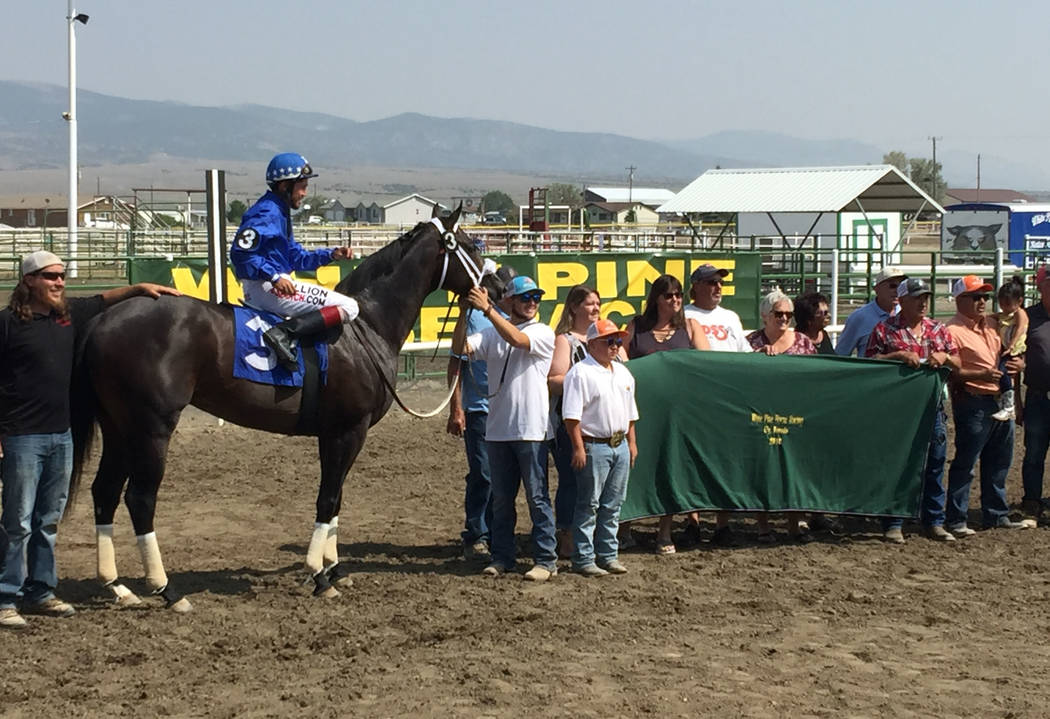 Winning connections bask in the joy of victory at the White Pine Races on Sunday, August 19, 2018 in Ely. (Mike Brunker/Las Vegas Review-Journal) 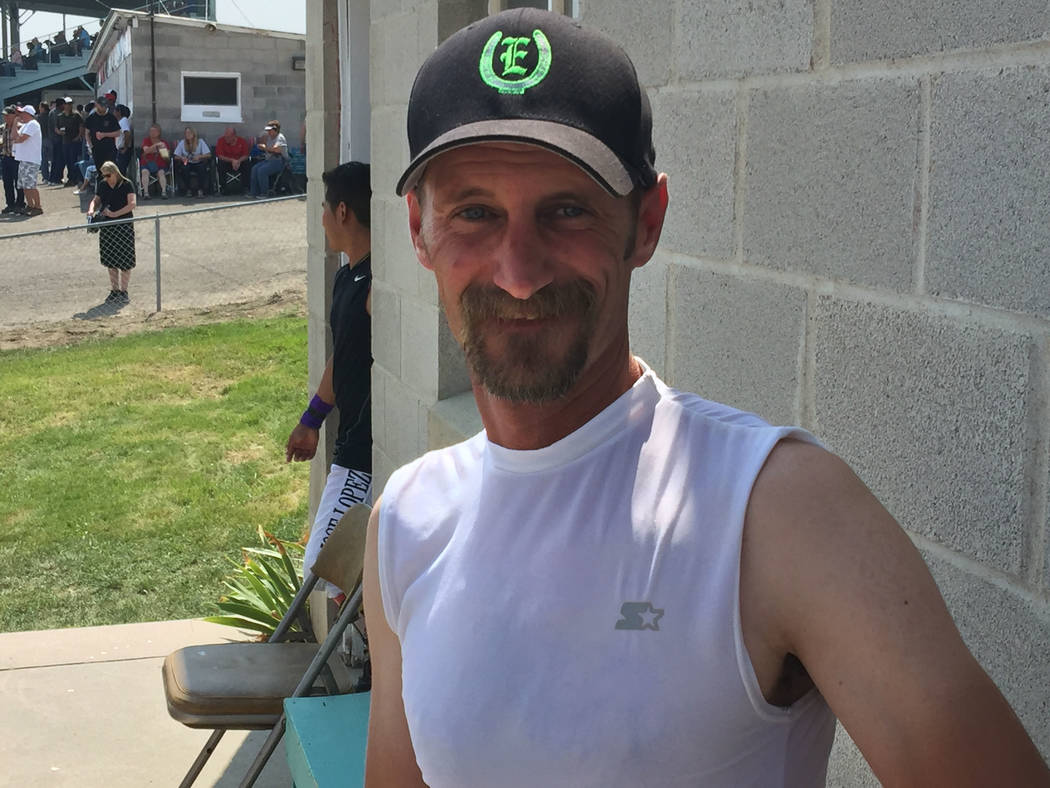 Jockey Dallas Erickson drove for 5 1/2 hours to ride in one race to replace fellow rider Jose Figueroa, who was injured. His mount ran third at the White Pine Races on Sunday, August 19, 2018 in Ely. (Mike Brunker/Las Vegas Review-Journal) 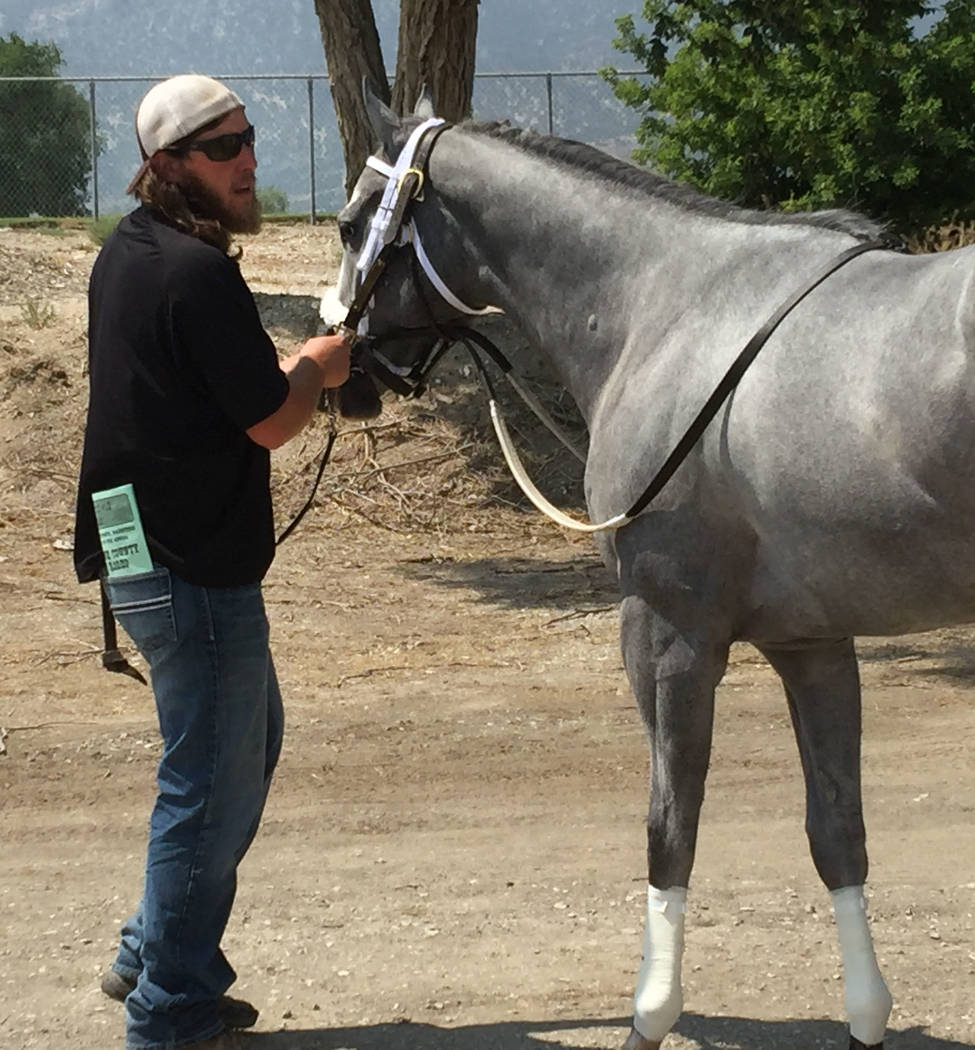 This week we check in on two extremes of the horse racing world — prestigious Saratoga Race Course and the White Pine Races in Ely, one of two live racing meets in Nevada.

On the surface, there is no comparison.

Saturday’s Saratoga headliner, the $1 million Grade 1 Travers Stakes, will pit Wonder Gadot (pronounced “gah-DAHT”) against many of the nation’s top 3-year-old colts, including Good Magic, Catholic Boy and Gronkowski, as she tries to become the first filly to win the prestigious Midsummer Derby in more than a century. And the six other graded stakes races on the undercard also drew full fields of some of the best horses in North America.

The 20 races run over three days at the White Pine Races, on the other hand, averaged purses of just over $3,500 and featured horses that are generally either slow or have left their best days behind them.

Nonetheless, my first visit to the fairgrounds in Ely reminded me about what I love about horse racing at its most basic.

I met some serious and knowledgeable trainers — Chet Child, Mark Hanson and Mike Monson — all of whom noted that there is a camaraderie among those who compete at the fairs that you don’t find in racing’s big leagues.

At the same time, the fair circuit purses help keep afloat these small operations, many of which break horses for other outfits in addition to conditioning runners for their breeder clients.

“This is my sole source of income, so I have to do well,” said Hanson, 28, who races out of Pocatello, Idaho.

I also spoke with journeymen jockeys Jose Figueroa, 31, who suffered a broken arm in a hard spill Friday and will miss at least six weeks of action, and Dallas Erickson, 41, who drove 5½ hours from Malta, Idaho, to replace him aboard one mount for Monson on Sunday. The horse, Mick Lovin, finished third in the AQHA Bonus Challenge Stakes for quarter horses, adding a bit of gas money to the roughly $60 fee that jockeys receive for each race they ride.

Then, I bent a knee before fair racing royalty.

Generations, a 9-year-old gelding, has won 25 straight races, according to his co-owner, Robin Dunn. I could only document 19 through Equibase and American Quarter Horse Association records. Dunn said the other wins occurred at “unrecognized” racetracks in places such as Beaver, Utah, and Blackfoot, Idaho, which is why they’re not in the record books. According to his research, Generations has the second-longest active win streak in the world, trailing only Australian sensation Winx, who recently won her 26th in a row.

It’s a great example of how the lower-level fair tracks enable a horse such as Generations, who couldn’t cut it in Southern California early in his career, to have a long livelihood in the lower rungs of the sport.

“He gets treated like a king,” said Dunn, who claimed the earner of almost $100,000 with partner Jim Hanson for $5,000 out of a race at Los Alamitos. “Fans love him, and everybody knows him.”

Another thing about live racing is that it mints new fans in ways that TV and simulcasting don’t. I lost count of the number of young kids racing around the apron and lining up at the paddock to learn the fine points of equine body language from their parents.

So as you admire the best the sport has to offer this weekend, spare a thought for the people and horses who work far from tracks such as Saratoga and Del Mar. And think about supporting local racing in the year ahead with your presence.

In the Sword Dancer, a 1½-mile race on the inner turf course for 3-year-olds and up, the crowd ’cappers give a narrow edge to 7-2 morning line favorite Sadler’s Joy over Spring Quality (4-1) and Channel Maker (5-1).

I’ll see if I can beat the deserving favorite with the steadily improving Funtastic (9-2), using Sadler’s Joy and Bigger Picture (8-1) to round out my top three.

In the Travers, run at 1¼ miles on the main track, the crew is deadlocked between the two Chad Brown stablemates, 2-1 morning line favorite Good Magic and Gronkowski (4-1), with Wonder Gadot (5-1) holding down the third spot.

In this week’s featured comment, veteran handicapper Patrick Morrison makes this observation about the hazards of betting races overflowing with quality contenders.

“I don’t think races like this can be successfully handicapped with any degree of success by me for sure and maybe by anyone,” he wrote. “I will enjoy watching them and keep my money in my pocket.”

Sound advice that I’d normally follow. But if my top pick, Catholic Boy, goes off anywhere near his 8-1 morning line, I might just throw caution to the wind. I like Wonder Gadot to nose out Good Magic for second.