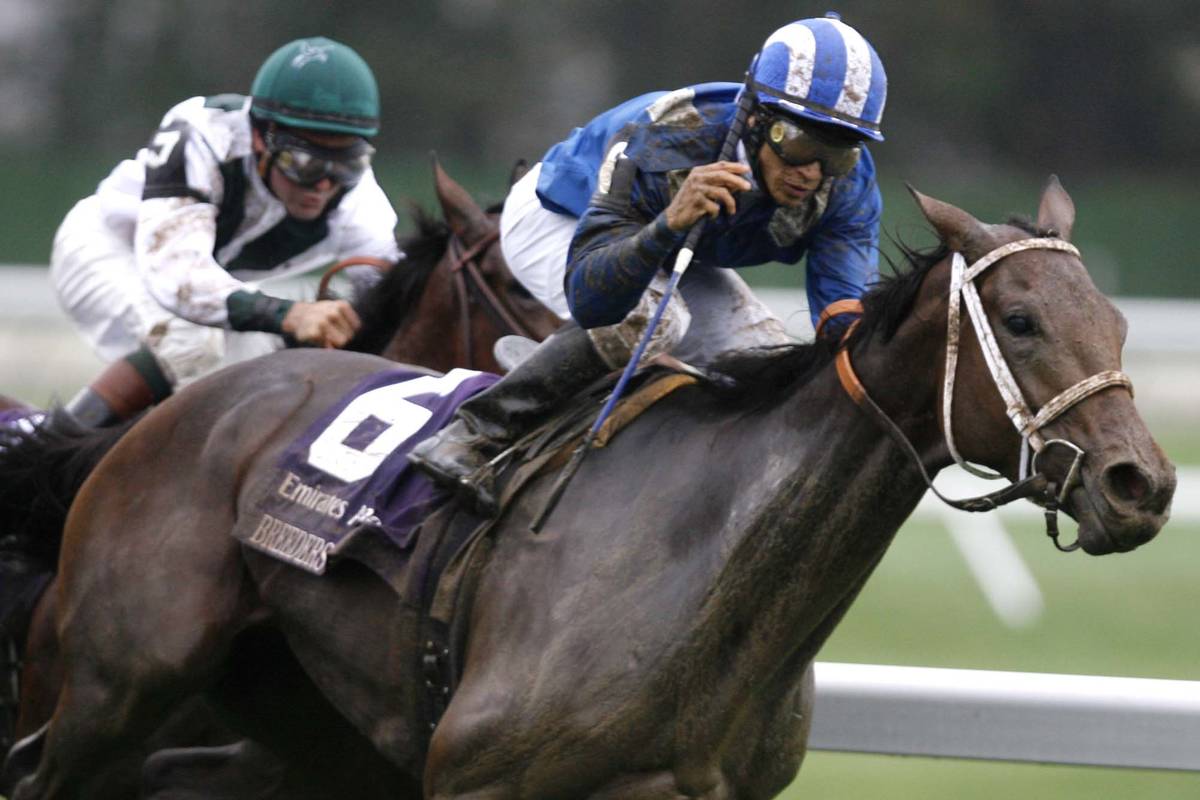 FILE - In this Saturday, Oct. 27, 2007 file photo, Lahudood of Great Britain, right, ridden by Alan Garcia, rounds the fourth turn before winning the Breeders' Cup Filly and Mare Turf horse race at Monmouth Park in Oceanport, NJ. The most stringent rule regarding the use of a whip in thoroughbred horse racing will be the controversial focal point when Monmouth Park opens its meet on Friday, May 28, 2021. The new rule adopted by the New Jersey Racing Commission allows a horse to be struck with a riding crop only for safety reasons. (AP Photo/David Gard, File)

Imagine you’re driving in a NASCAR race at Talladega and suddenly you realize the steering wheel isn’t responding to your attempts to negotiate the turns. When you glance to your left and right, you see that other drivers also are struggling to control their racing machines.

Sounds like a bad dream, but it’s a rough analogy for the situation confronting thoroughbred jockeys at New Jersey’s Monmouth Park as they attempt to navigate a new “no whip” rule imposed by the state’s Horse Racing Commission.

The rule — the strictest in the U.S. – allows jockeys to carry a riding crop but bars its use “except for reasons of safety.”

Hitting a horse to encourage it to run faster or even waving the stick at a horse during a race — a common technique used to keep a mount focused on running — can result in a $500 fine and/or five-day suspension for the first offense, with the penalty potentially doubling with each occurrence, according to Terry Meyocks, CEO of the Jockeys’ Guild.

No serious incidents have occurred in the first seven days of racing at the seaside oval, which opened its 53-day meeting on May 28. But Meyocks said he considers that fortunate, calling the rule handed down by the racing commission in September “irresponsible” and “dangerous.”

“It’s unfortunate for everybody, for our industry,” he said of the rule, which Hall of Fame jockey John Velazquez, co-chair of the Jockeys’ Guild board, has compared to playing Russian roulette. Some top riders at Monmouth, including “Jersey” Joe Bravo, Anthony Gallardo and Daniel Centeno, have said they will ride elsewhere this summer, with the former saying he will shift his tack to Del Mar.

The guild has filed a lawsuit seeking to block the rule, but its request for an emergency stay was denied and a court is not expected to hear the challenge until later this year.

Kathy Guillermo, a senior vice president with People for the Ethical Treatment of Animals (PETA), doesn’t buy the safety argument and said the jockeys are ignoring growing public sentiment opposing the practice of whipping horses.

She pointed to a three-year study in Australia that found banning the use of whips during races did not result in “statistically significant differences” in terms of increased risk, jockey behavior or race finishing times.

“We do not have a problem with jockeys carrying a whip and, if they get in a situation, using it,” she said. “… But the aspect of this that I don’t think the jockeys are thinking of is what it looks like to the public.”

Another important constituency in the debate is bettors, though it’s not yet clear whether they will redirect their wagering dollars to other venues in response to the rule. Handle has been down in the early stages of the Monmouth meet, but bad weather and short fields may have played a role in suppressing wagering.

The parade of winning favorites at Monmouth, which has seen the chalk win nearly 48 percent of all races heading into Friday’s card, also may be a factor.

This is all likely just a preview of the debate that will surround the debut of the new federal Horseracing Integrity and Safety Act next year. The act, approved by Congress in December, created a federal body to design and implement uniform national medication and safety standards, including whip use.