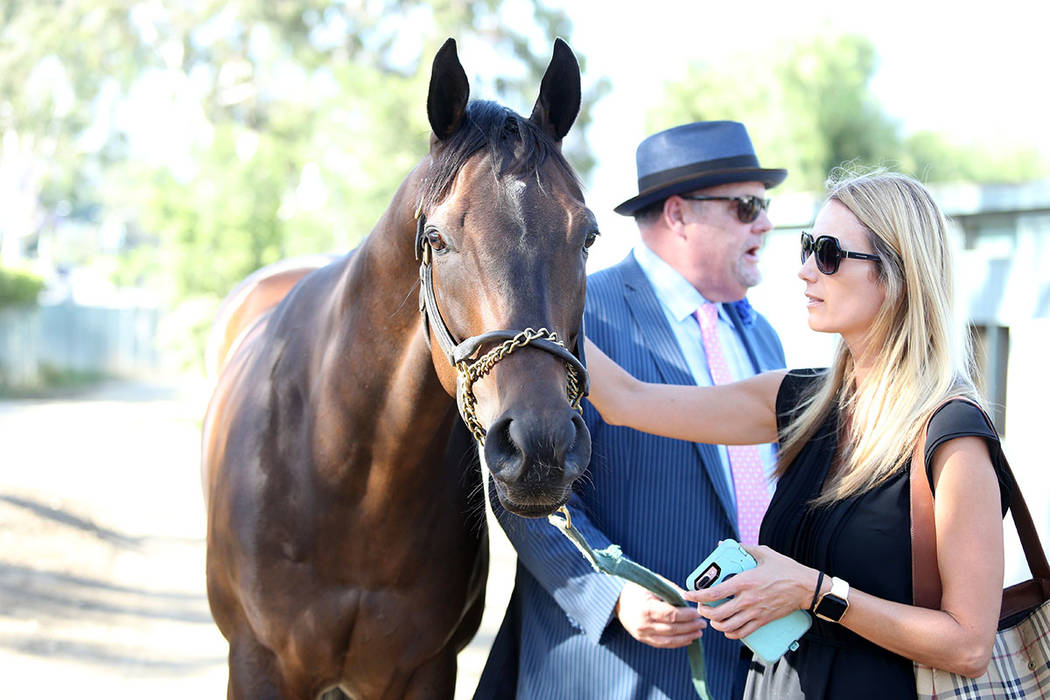 An owner pets Swiss Minister, who is held by trainer Nick Hines. (myracehorse.com) 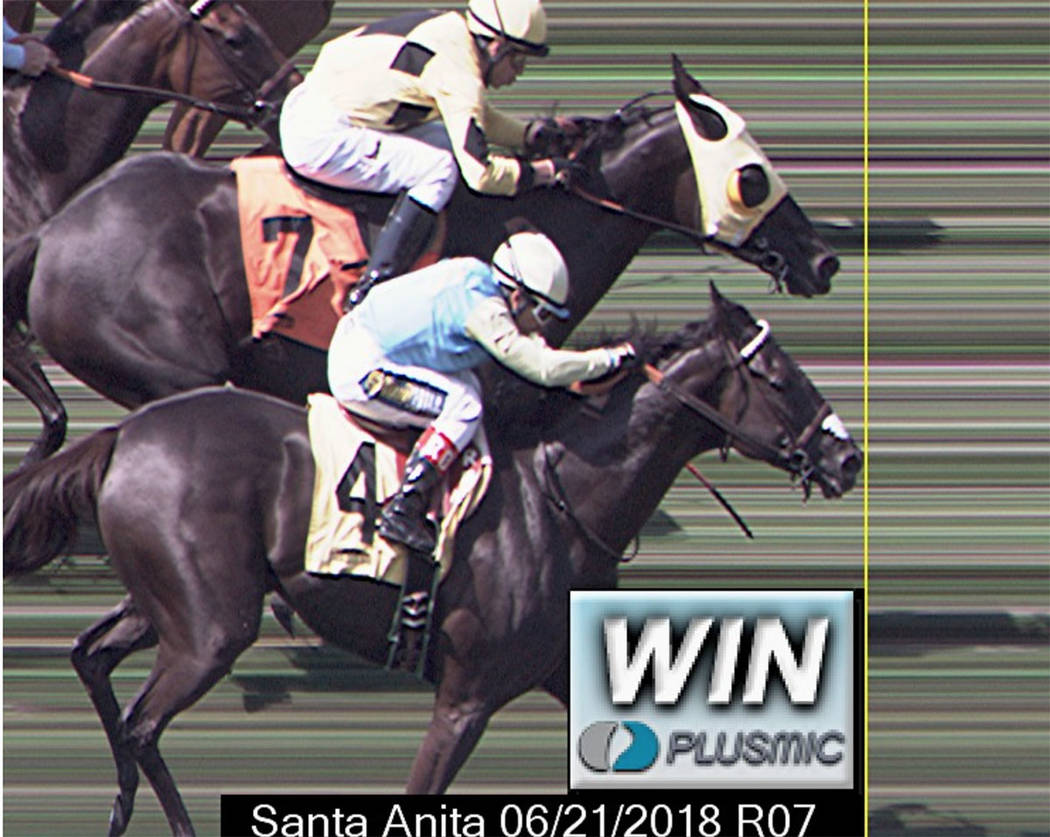 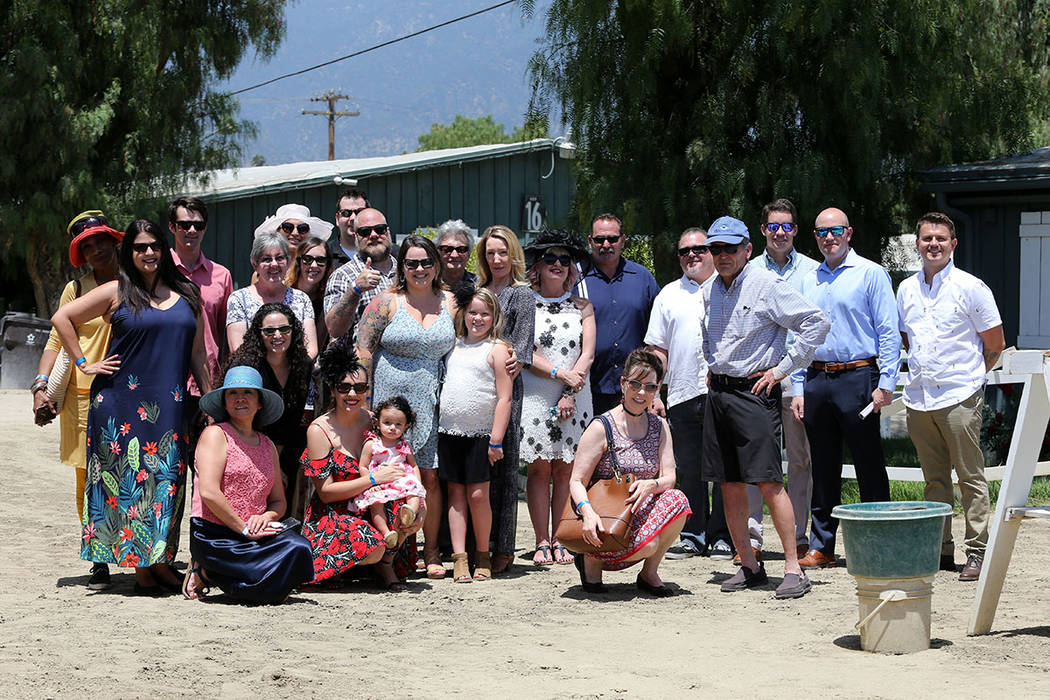 It’s long been my opinion that owning racehorses is only a slightly less effective means of burning cash than tossing it into an incinerator.

But I might be have to reconsider thanks to a novel startup that is allowing regular Joes and Jills without a national treasury at their disposal get involved as owners in the sport of kings.

Experiential Squared’s Myracehorse app enables you to buy into an active racehorse or a promising prospect for as little as $100. Yes, that only gets you a tiny share — maybe no more than a handful of mane — but it also gives you entree into a rarified world usually restricted to sheikhs, titans of industry and those to the manor born.

The app is available in Apple and Google stores and on the web at https://MyRacehorse.com. Opportunities are now largely limited to residents of California, but its creators hope to take the concept national later this year if they can gain approval from the Securities and Exchange Commission.

The app is the brainchild of Michael Behrens, a longtime racing fan, and his business partner, David Kandasamy, who have cleverly married the trend of syndicated ownership groups in racing with the microfinancing that is all the rage in technology circles. They’ve also made it devilishly simple to participate, as shareholders needn’t worry about ongoing expenses such as training and vet bills after the initial investment.

“At the core, we both believe it’s just a cool thing that everyone should be able to experience,” Behrens said of the opportunity to own even a tiny piece of a racehorse.

Dozens of early-adopters have taken the plunge, including a gang of about 50 that recently visited the Santa Anita backstretch to meet their steeds.

But such events only work for limited numbers of shareholders in the vicinity, so the developers are fine-tuning delivering content via the app to keep everyone in the loop. After buying a share, for example, you might get video of “your horse” working out, then hear the trainer assess its fitness. Or, if you buy into a yearling, you might get periodic updates from the breeder along with video showing it growing into its long legs.

Behrens said his team also is working to develop a suite of “Ownership 101” content to help those who are new to the business find their feet.

The myracehorse app is a great idea to get people involved in racing, and I will report back if it begins broadly offering Nevadans a chance to participate.

The #RJhorseracing handicapping corps heads north this week to tackle Saturday’s $1 million Queen’s Plate at Woodbine Racetrack in Toronto and the next race on the program, a salty optional claiming race.

In the former, a 1¼-mile test for 3-year-olds on the artificial Tapeta track, the crew likes the filly Wonder Gadot, the 3-1 second choice on the morning line, to upend the boys, picking her over favored Telekinesis (5-2) and distaff rival Dixie Moon (4-1).

“Lots to like — the extra quarter-mile, addition of blinkers, getting Johnny (Velazquez) back,” wrote Charlie Cronin of the group’s pick. “Note the Beyer on 6/9 was the same as Telekinesis two races earlier and in a stronger race.”

I agree that Wonder Gadot is the horse to beat. I’ll use her in exactas over two long shots that could hit the board, Neepawa (15-1) and Say the Word (20-1).