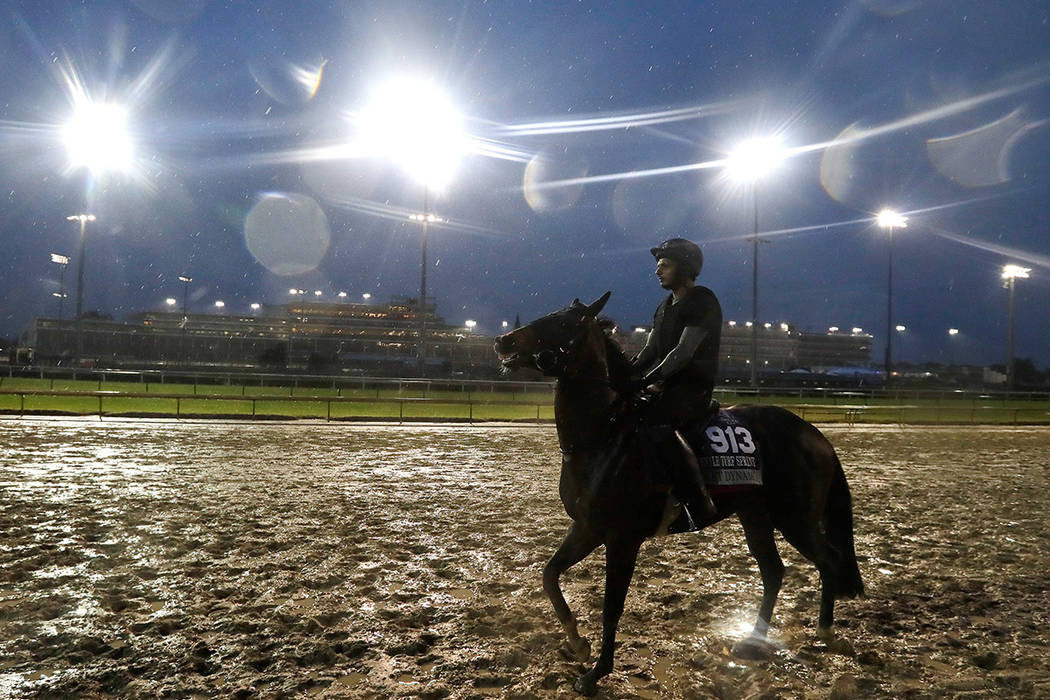 Pay attention, Eliza, and repeat after me: “The rain in Louisville falls mainly on the oval.”

That was a tip of the hat to the many fair ladies in my life, but also an effort to make the point that the weather is likely to play a role in the outcomes of at least some of the 14 Breeders’ Cup races run at Churchill Downs on Friday and Saturday.

Rain began falling early Wednesday in Louisville and continued into Thursday. It was expected to stop by midnight, but according to my observations of a nearby online rain gauge the historic racetrack received more than 2½ inches of precipitation since Wednesday morning.

I’m not the only handicapper playing amateur meteorologist this week. While the main track is known to drain quickly and might be rated “fast” by the time the first Breeders’ Cup race is run Friday, the turf course will take longer to dry out and will almost certainly be on the soft side on Friday and likely on Saturday as well.

That should favor European runners, who are far more accustomed to galloping in the gunk than their U.S. counterparts, but it also can provide some big surprises when horses who have never run on an “off” track discover they really like it.

In the meantime, the #RJhorseracing handicappers are champing at the bit to get into this week’s featured races on Saturday, the $2 million Mile and the $6 million Classic. We’ll get to that momentarily after I deliver my customary cautionary note about betting the Breeders’ Cup.

With so many races overflowing with talented horses, it’s easy to get caught up in the pursuit of a life-changing score. I’m not against sudden riches, but I advise setting aside a minimum of 60 percent of your bankroll for win bets. You’ll be far less likely to head home with empty pockets if you hit even one of those, and you’ll still be able to swing for the fences a few times in hopes of hitting one out of the park.

Also try to pick your spots. While it’s tempting to gorge on the racing delights laid before you over the two days of racing, remember these are some of the most-challenging handicapping puzzles out there. Consider sitting on your hands for those races in which you don’t have a strong opinion and save your scratch for the ones where you do.

The #RJhorseracing handicapping crew is tackling the Mile, a middle distance turf race that looks to me like the most wide-open contest on the Breeders’ Cup program.

The crowd’ cappers are siding with Oscar Performance, the co-second choice on the morning line at 6-1, over 5-1 favorite Polydream and Next Shares (10-1).

“Throw out last year’s Breeders’ Cup and Oscar should give an “Oscar” performance, but not likely at 6-1,” wrote crowd ‘capper Mas Yoshinaga of the crew’s choice.

I’m a big Oscar fan myself, but I have the order reversed, with Polydream, a 3-year-old filly from France trained by the redoubtable Freddie Head, taking the measure of Oscar and fellow Euro I Can Fly (10-1) for the show.

In the headline race, the Classic at 1¼ miles on the main track, the handcappers were deadlocked at press time between 5-2 morning line favorite Acclerate and West Coast (5-1) third behind Gun Runner in this race last year.

“West Coast just keeps getting better and better — and his latest workouts show that. The race should set up nicely for him to pounce after a stalking trip,” wrote crowd ’capper Dean Wright of the crew’s co-choice, who is trained by Bob Baffert.

I’m going a different direction and siding with Mendelssohn (12-1). I like that trainer Aidan O’Brien abandoned the usual tactic of parachuting in to run and has instead been teaching the 3-year-old son of Scat Daddy to race American-style. He got caught in a speed duel with Diversify last out, but I think he will stalk and pounce in the Classic. I’ve got Catholic Boy and Mind Your Biscuits filling out the top slots.