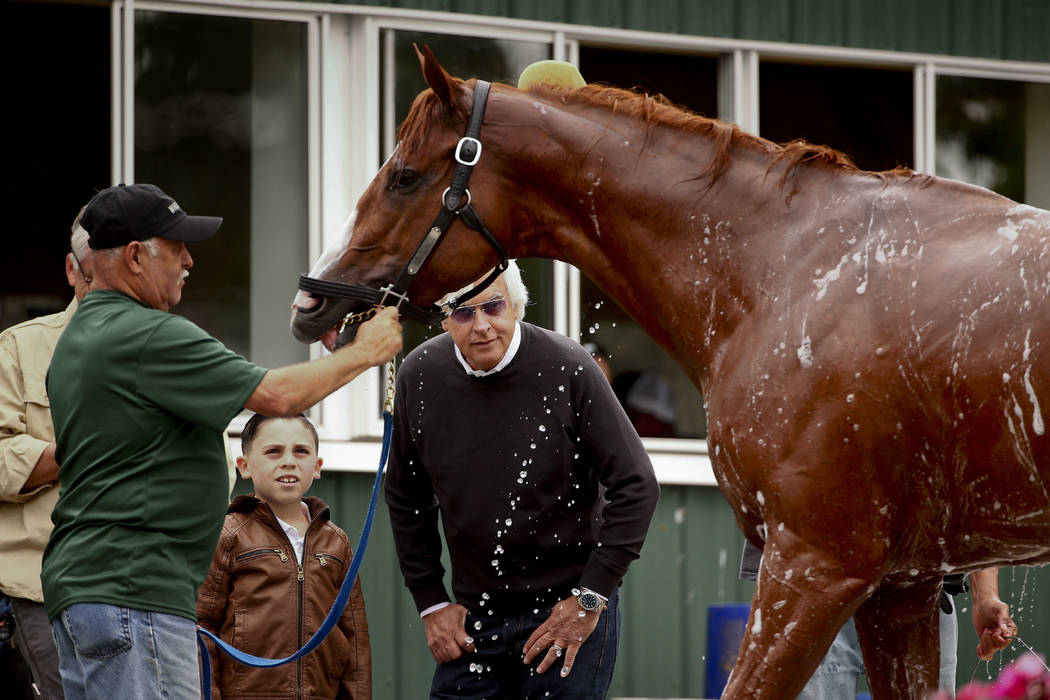 Trainer Bob Baffert, right, watches as Triple Crown hopeful Justify is bathed after a workout at Belmont Park, Thursday, June 7, 2018, in Elmont, N.Y. Justify will attempt to become the 13th Triple Crown winner when he races in the 150th running of the Belmont Stakes horse race on Saturday. (AP Photo/Peter Morgan)

I asked for your thoughts on horse racing’s worst problems as we turn the calendar to 2019 and boy did you respond. I heard from ardent horseplayers, workers in the industry and even a few people who don’t give a damn about the sport.

Here is a Top 7 — 10 if you’re reading online — list of their (and your) gripes, arbitrarily ordered by me:

No. 10: The rise of “super trainers.” @Urbanhorsedoc responded on Twitter that the rise of the so-called super trainer — conditioners like Bob Baffert and Todd Pletcher who have hundreds of horses in their barns — is detrimental to the sport. Others have noted that they can drive other trainers out and hurt handle by often entering multiple horses in a race.

No. 9: Treatment of horseplayers. Mark Wayman, a horse owner and fan for 40 years and a member of the #RJhorseracing crew, notes that casinos are brilliant at retaining customers back with loyalty marketing, but racetracks and betting services, not so much. “They need to provide offers to the players that incentivize them to participate,” he wrote.

No. 8: Racing of 2-year-olds: A number of respondents wrote in to argue that the racing of still maturing 2-year-olds prevents them from having long racing careers (see No. 4).

No. 7: Uncoupled entries: Several of you wrote to say that rules in some racing jurisdictions allowing trainers to run more than one horse in a race without requiring them to be “coupled” — or considered as a single entry — are unfair to bettors and enable trainers to set up betting coups.

No. 6: Cheating: I’m not sure this is a big problem, though there’s little doubt that it goes on. And there’s no doubt that there is a perception that owners, trainers and jockeys are all involved in fixing outcomes, which is in itself a concern.

No. 5: Lack of public awareness: #RJhorseracing handicappers David Williams cited an recent episode of “Jeopardy” in which the clue was “Bob Baffert trained American Pharoah and this horse to Triple Crowns in the past three years.” “None of the three contestants even ventured a guess!” he wrote.

No. 4: Early retirements: Racehorses come and go so quickly now that there is little opportunity for the public to embrace a star, let alone get interested in the sport. Several blamed greedy thoroughbred breeders for the problem.

No. 3: Failure to promote the horses: “They are taking a ‘thinking man’s game’ and turning it into a four-legged lottery, and the people have responded by staying home in droves,” Jack Pritchard, who describes himself as a former professional handicapper, opined via email. #RJhorseracing handicapper Les Izmore lodged a related complaint blasting racetrack owners for promoting entertainment like infield concerts rather than the sport itself.

No. 2: Use of computer algorithms by big bettors: Caller Paul left me a voicemail saying that the increasing use of computerized software by syndicates with direct access to the Tote system cheats players by creating dramatic late odds shifts. “The computer guys have the biggest edge. They’re allowed to bet about a second before post time, and even if they lose 5 percent of what they wager, they’re giant winners with the rebates,” he said.

No. 1: Racing horses into the ground: “Racing owners need to take responsibility for ensuring safe retirement for thoroughbreds,” wrote Alicia Windsong Diamond of Abingdon, Virginia. “The sport must ensure that TB’s do not end up in slaughter here or abroad. It’s repulsive and unethical.”

Remember to send me your thoughts on what it is about this game that still gets your pulse racing, or at least something that the people calling the shots are getting right, for use next week. Also, I’d love to hear what you’d like to see more of in this column.

The #RJhandicappers are tackling a pair of challenging races Saturday at Santa Anita: a $25,000 claiming sprint race for 3-year-olds and the American Oaks, a Grade 1 turf test for 3-year-old fillies run at 1 1/4 miles.

In the former, a wide-open affair run as the 6th race on the card, the crowd ‘cappers are lining up behind Treasure Hunter, 4-1 second choice on the morning line, over Neighborhood Bully (5-1) and JT’s A.T.M. (5-1).

“Like the drop, the distance, history at SA, and (jockey Tiago) Pereira back. Should be enough against these,” writes crew member Charlie Cronin.

I landed on Treasure Hunter, too, though because I think he ran against a closer bias in his last race at Del Mar. I’ll use My Heart Awakens (12-1) and favored Saratoga Morning (7-2) beneath.

“Lightly raced and has won two of three this year,” crowd ‘capper Andrew Millbrooke wrote of the group’s pick.

I like Californiagoldrush as well, though primarily because it looks like she can control the pace from start to finish. I’ll use Paved and Competitionofideas below as well.