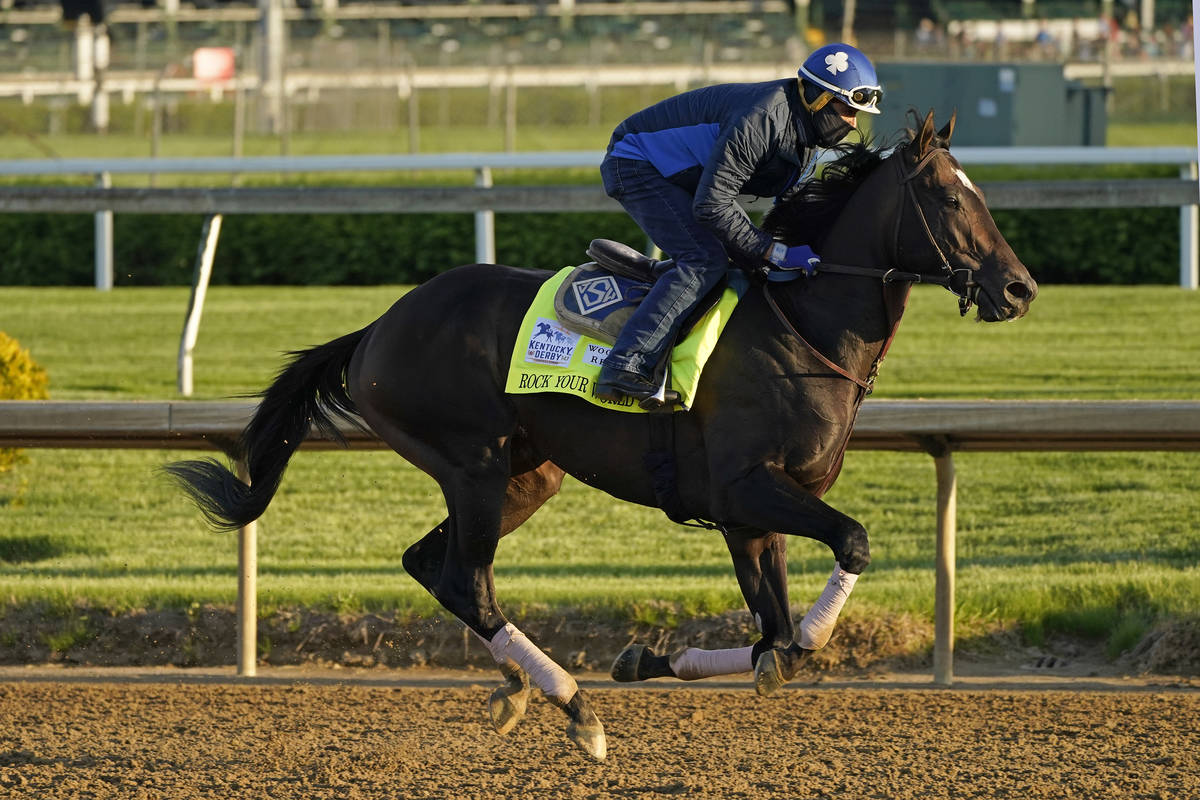 Kentucky Derby hopeful Rock Your World works out at Churchill Downs Tuesday, April 27, 2021, in Louisville, Ky. The 147th running of the Kentucky Derby is scheduled for Saturday, May 1. (AP Photo/Charlie Riedel)

The “other” shoe in the Derby controversy fell with a thud Wednesday. A test of a “split sample” of blood drawn from the Bob Baffert-trained colt confirmed the presence of a minute amount of betamethasone, a therapeutic steroid used to treat joint inflammation that is banned at any level on race day.

That prompted Churchill Downs to slap a two-year suspension on the Hall of Fame trainer, during which he will be prohibited from entering horses at any track owned by the company.

The Kentucky Horse Racing Commission is expected to make Medina Spirit’s disqualification official within days, awarding the Derby victory to the runner-up in the race, the Brad Cox-trained Mandaloun.

But that is unlikely to be the final word on the matter. Baffert and his lawyer have suggested they’ll go to court to attempt to block any disqualification of Medina Spirit, arguing that the positive test was the result of accidental contamination from a skin cream used to treat a rash and did not provide the colt with any unfair edge.

It’s against this backdrop that the 153rd running of the $1.5 million, 1½-mile “Test of the Champion” at Belmont Park will attempt to return the focus to the racetrack where it belongs.

Despite drawing a relatively compact field of eight, the Belmont offers great betting opportunities. And there’s no need to sit on the bankroll until the big event, with seven Grade 1 stakes enlivening the undercard. The race will be broadcast on Saturday by NBC, with post time at 3:49 p.m.

Rock Your World, second choice in the Derby wagering before blowing the start, and Known Agenda, impressive winner of the Florida Derby before finishing ninth in the Run for the Roses, also figure to attract their share of support at the betting windows.

I think pace will be the decisive factor, with Rock Your World seizing control of the proceedings early.

The Santa Anita Derby winner did not get to show his brilliant speed in the Kentucky Derby, when he broke slowly and was then sandwiched leaving the gate. After that, the John Sadler-trained son of Candy Ride was then pinched back and found himself at the back early rather than on top where he was projected. After that, he made a mild midrace move before fading to 17th in the 19-horse field.

With a better break, jockey Joel Rosario should be able to carve out moderate fractions of 1:13 and change for 6 furlongs and 1:38 and change for the mile, leaving horses trying to make up ground late facing a tall challenge.

I will put 60 percent of my bankroll on his nose to win.

The rest will be invested in exactas — Rock Your World boxed with Known Agenda and Rombauer — and trifectas, using Rock Your World over Known Agenda, Rombauer and Hot Rod Charlie and a wider selection of all primary contenders as well as Bourbonic and Overtook for third.

I’m taking a big chance by leaving Essential Quality off the top of my tickets, but with risk comes the opportunity for substantial reward.