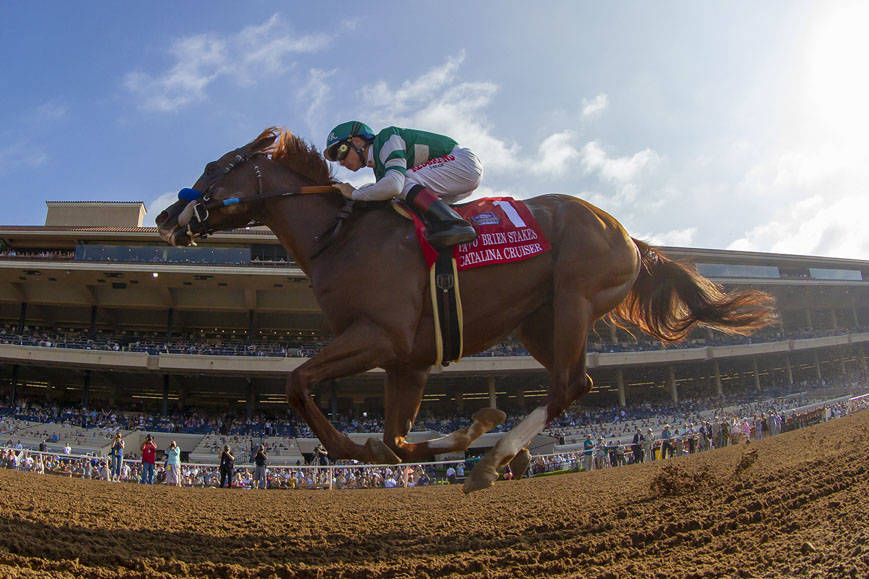 The Breeders’ Cup Dirt Mile was an afterthought when the series was created in 1984, but it’s become one of my favorite races in the Thoroughbred World Championships.

Creators of the series understandably focused on the turf Mile at the beginning to ensure that the Europeans bought into the Breeders’ Cup concept. But in 2007, they added the Dirt Mile, along with the Juvenile Turf and Filly & Mare Sprint, to the menu, making my day and many days to come.

That’s because I really like the ’tweeners — the horses that aren’t pure sprinters or gallopers but have some of the best qualities of both. And in the Breeders’ Cup, you often get horses who have excelled running longer or shorter trying their luck against the best middle distance horses, which makes for an intriguing handicapping challenge.

As part of our continuing early review of the individual Breeders’ Cup races to be run Nov. 2 and 3 at Churchill Downs, here’s a look at the leaders of the Dirt Mile division with five weeks to go.

Catalina Cruiser looks like the horse to beat. The 4-year-old John Sadler trainee is 4-for-4 and won the San Diego Handicap and Pat O’Brien Stakes, both Grade 2s, at Del Mar with ease in his most recent starts.

Sadler is planning to train the strapping son of Union Rags up to the Dirt Mile.

Other possible contenders from the West include City of Light, who started the year on a high note before being beaten in the Gold Cup at Santa Anita and the Forego Stakes, and Battle of Midway. Last year’s champ, who was unretired after proving subfertile as a stallion. But he may not even make the race after suffering two defeats in his first two races since his return.

With Met Mile winner Bee Jersey retired, the cast on the East Coast is a bit murkier.

Mind Your Biscuits, the richest New York-bred of all time, would be a solid contender, but trainer Chad Summers is considering the Sprint, Dirt Mile and Classic for the versatile 5-year-old. He’s scheduled to race Saturday in the 1⅛-mile Lukas Classic (Grade 3) at Churchill Downs, which should provide a good clue on where he’ll land.

Others in the hunt include Pattern Recognition, who stepped up into stakes company for trainer Chad Brown and came away with a victory in the Grade 2 Kelso Handicap last month at Saratoga; Promises Fulfilled, winner of the Grade 1 H. Allen Jerkens Stakes and the Grade 2 Amsterdam Stakes at Saratoga in his last two starts; and Limousine Liberal, a multiple graded-stakes-winning sprinter.

Trainer Ron Moquette also is said to be considering a run in the Dirt Mile for Whitmore, another crack sprinter who captured the Grade 1 Forego Stakes at Saratoga in his most recent start. He’ll square off Saturday in the $250,000 Phoenix Stakes at Keeneland with last year’s Breeders’ Cup Sprint winner, Roy H, as well as Promises Fulfilled and Limousine Liberal.

The #RJhorseracing crowd handicappers are focused on the lush turf of Belmont Park this week, tackling the Grade 1 Joe Hirsch Turf Classic Stakes for 3-year-olds and up at 1½ miles and the Grade 3 Pilgrim, a 1 1/16th-mile test for 2-year-olds.

In the former, a “win and you’re in” race for the Breeders’ Cup Turf, the crew is firmly in the corner of favored Robert Bruce, 2-1 on the morning line. Carrick (8-1) and Spring Quality (4-1) were tied for second.

I agree that Robert Bruce looks tough, but I give Carrick, the only 3-year-old in the field, a chance to upset and will go that way. And I’ll use long shot European shipper Teodoro (15-1) in hopes that he can inject some value into the exotics as the lone speed in the race.

In the Pilgrim, the crowd is staying chalky and going with 9-5 favorite Opry over Forty Under (6-1) and Somelikeithotbrown (7-2), who were knotted for the place.

I’ll take a shot with Social Paranoia (10-1), over Opry and Somelikeithotbrown.