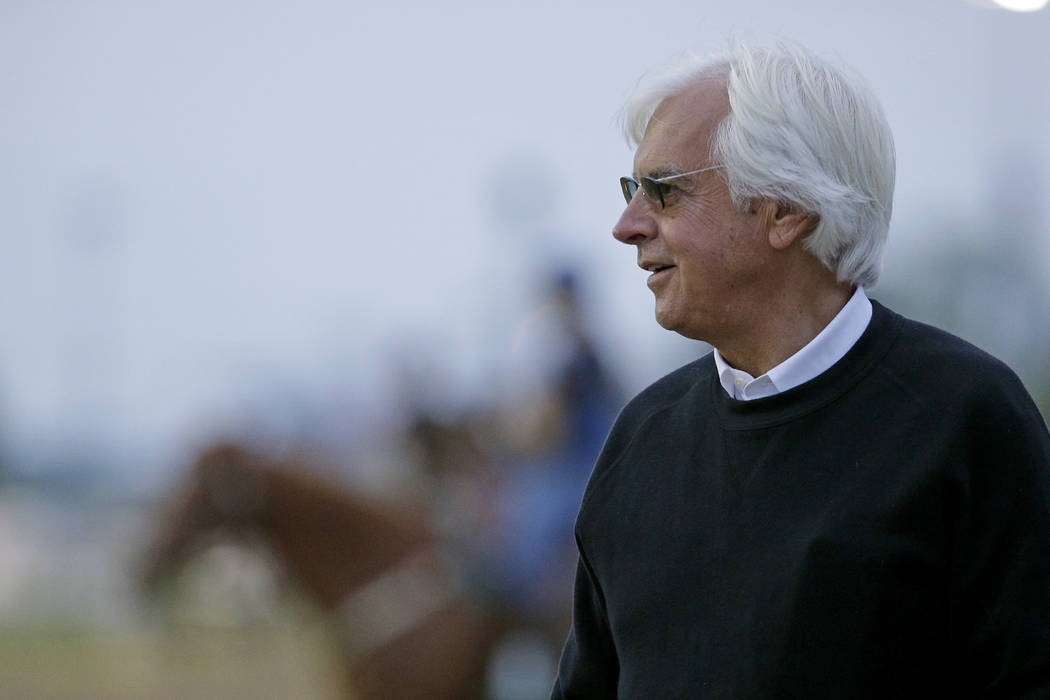 Trainer Bob Baffert watches a workout at Churchill Downs Tuesday, May 3, 2016, in Louisville, Ky. The 142nd running of the Kentucky Derby is scheduled for Saturday, May 7. (AP Photo/Charlie Riedel)

Is Justify the colt to snap the “curse of Apollo” by winning the Kentucky Derby?

Perhaps, but those backing the colt better hope he’s a quick learner and has a street fighter’s mentality.

Before we get to Justify’s chances of defying Derby history, a bit of background:

In 1882, a lightly raced colt by the name of Apollo pulled off an upset for the ages, defeating 4-5 favorite Runnymede on a “muddy” track to win the Kentucky Derby.

Given that was just the eighth Run for the Roses, fans could not have known the rarity of what they had just seen. Since Apollo’s victory, no horse that didn’t race at 2 has won the Derby.

Many have tried. Since 1937, 61 horses have entered the Derby without a race at 2. Their record is a collective “0-fer.” Some have come close — three seconds and five thirds — but Apollo’s mark still stands.

Justify probably will be the next to test the curse. The son of Scat Daddy demolished a maiden special weight field at Santa Anita by 9½ lengths Feb. 18, earning a Beyer speed figure of 104, then came back to romp by 6½ lengths against allowance foes Sunday at the Great Race Place while trying two turns for the first time.

In doing so, Justify registered a 101 Beyer over a “muddy” track, the same figure earned the previous day by Bolt d’Oro and McKinzie as they battled through the stretch in the San Felipe Stakes (Grade 2). The difference was that Justify earned his while coasting through the final quarter mile.

This horse clearly has the talent to break the curse, and he has trainer Bob Baffert in his corner. But remember that 0-for-61 stat and that he has not been challenged, bumped or trapped in a tight spot. And in the Derby, with 20 horses, that can be a fatal flaw.

The best thing for Justify would be a tough test in his final Derby prep, which has not been announced. Otherwise, he had better truly be a superhorse or the curse will be extended come the first Saturday in May.

The #RJhorseracing handicappers continue on the Triple Crown trail this week, taking on Saturday’s $900,000 Rebel Stakes (Grade 2) at Oaklawn Park and the $200,000 Jeff Ruby Steaks (Grade 3) at Turfway Park.

In the former, the ’capping crew likes 3-2 morning line favorite Solomini over Magnum Moon (7-2), with Title Ready (8-1) and Sporting Chance (5-1) tied for third.

“Solomini is getting a late start on his Derby run, but I find it hard to use the layoff as a reason to doubt him,” wrote (PonyPicker) Joe Mainardi. “The string of bullet works helps his cause. … One more thing, (jockey Flavien) Prat ships in with him.”

I like the ’cappers top 2, but will box them with High North (12-1), who ran a sneaky good comeback race and attracts Gary Stevens to ride.

In the Jeff Ruby, the handicappers see a wide-open race, narrowly siding with Mugaritz (6-1) over Hazit (co-morning line favorite at 5-1) and Archaggelos (6-1), who tied for second.

I’m parting company with the crew and taking Blended Citizen (6-1), who ran a credible third against a talented filly in the El Camino Real Derby at Golden Gate Fields. In exactas, I’ll use him with Pony Up (6-1) and Hazit.

Join the fun next week. Email me or hop on Twitter and search for the #RJhorseracing hashtag.