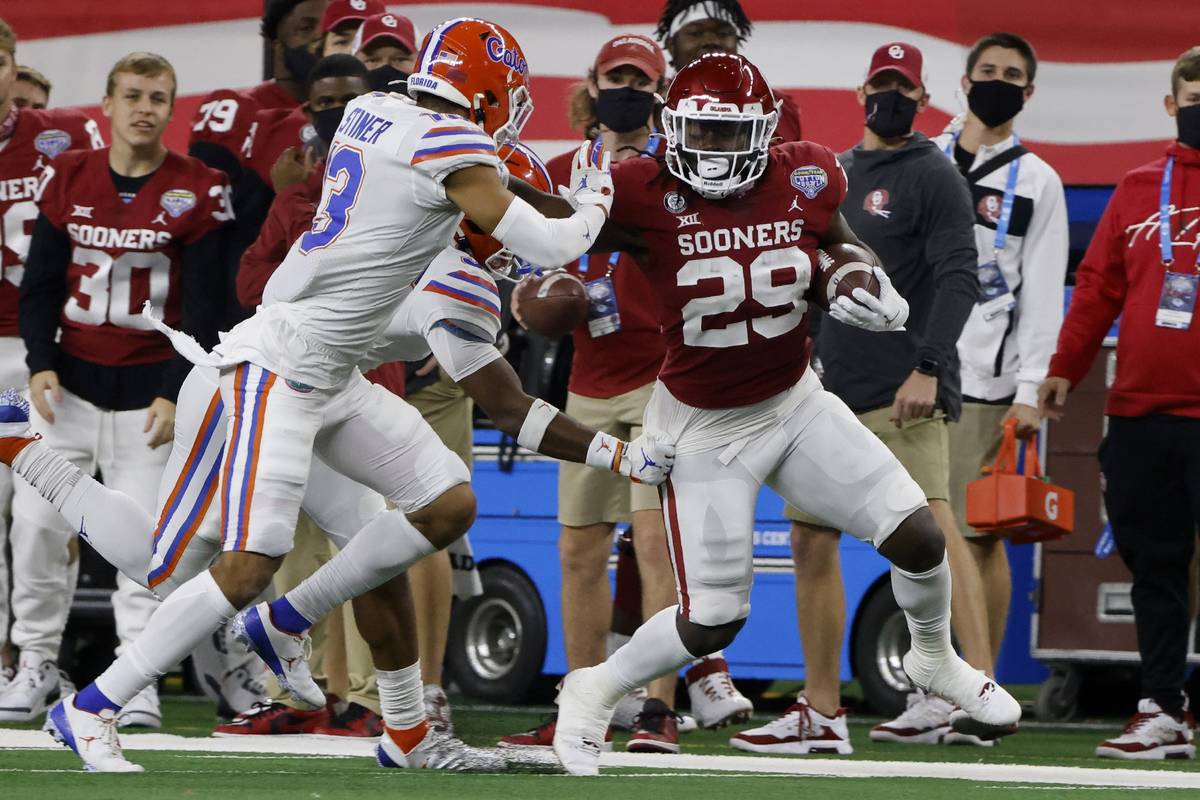 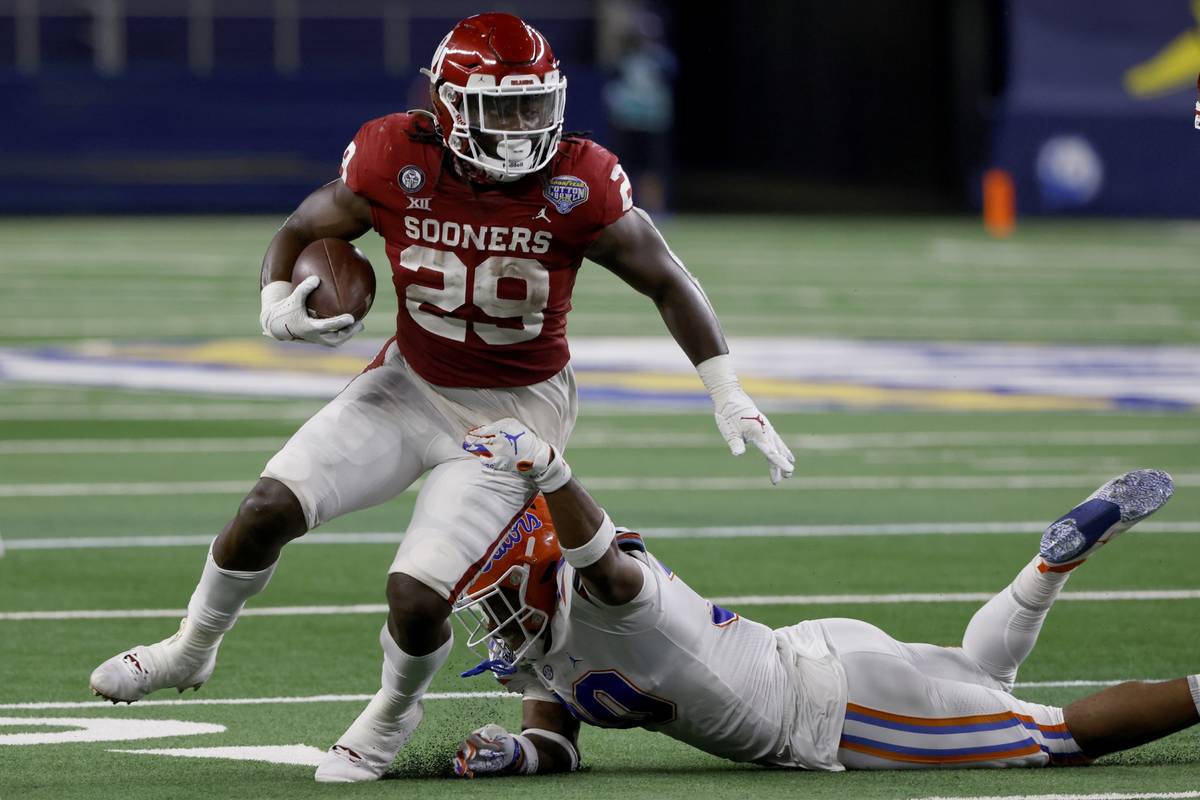 Oklahoma running back Rhamondre Stevenson (29) breaks a tackle attempt by Florida linebacker Amari Burney, right, on his way to a touchdown during the second half of the Cotton Bowl NCAA college football game in Arlington, Texas, Wednesday, Dec. 30, 2020. (AP Photo/Ron Jenkins) 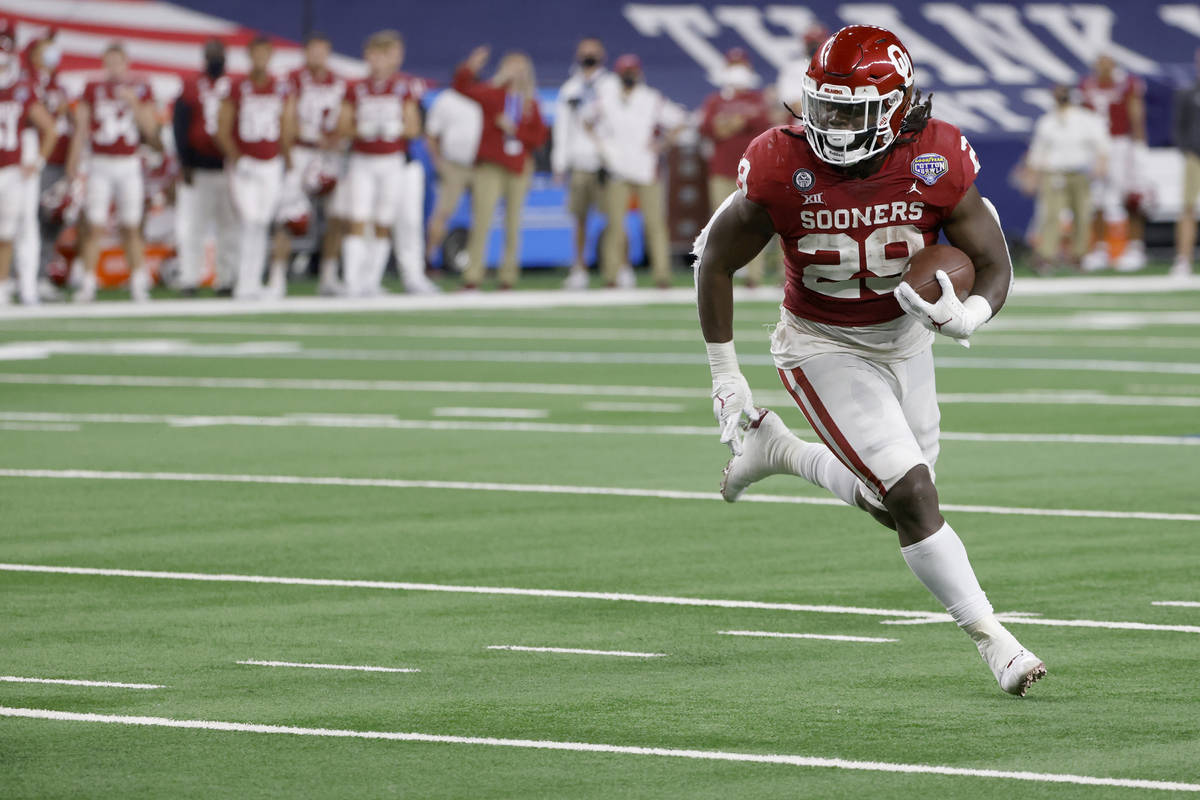 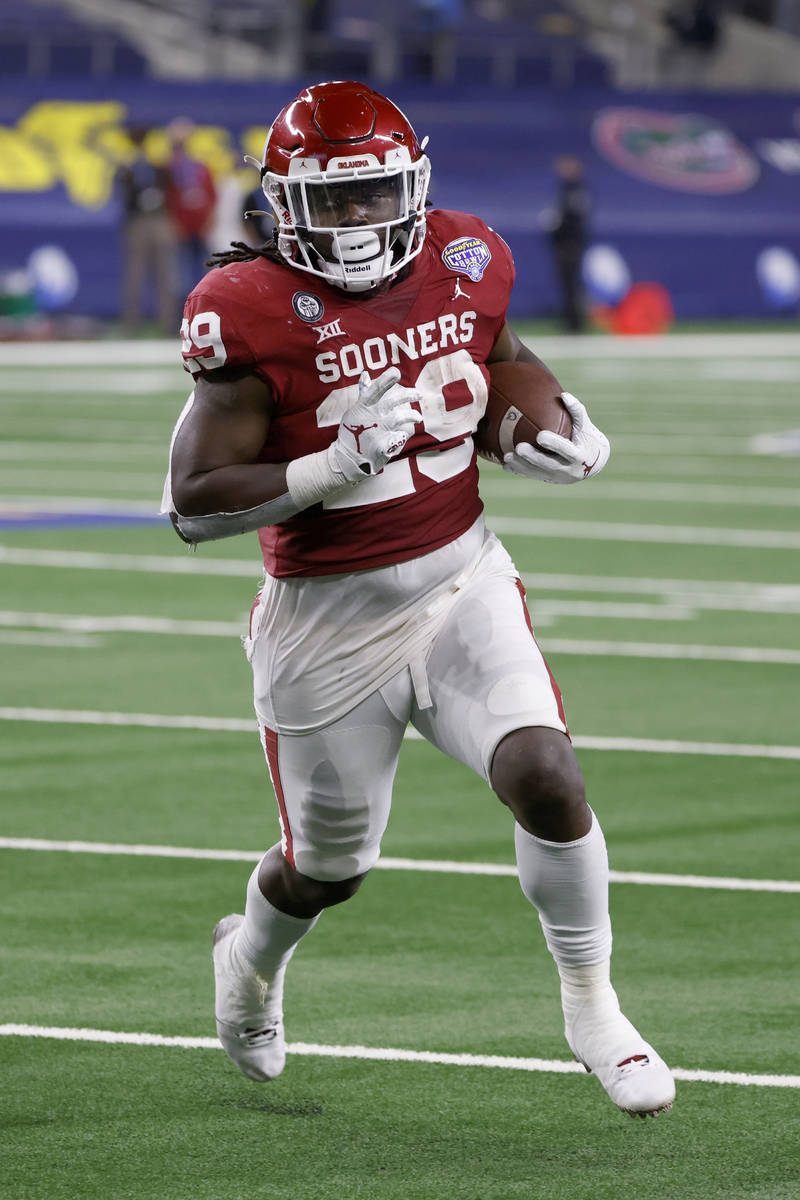 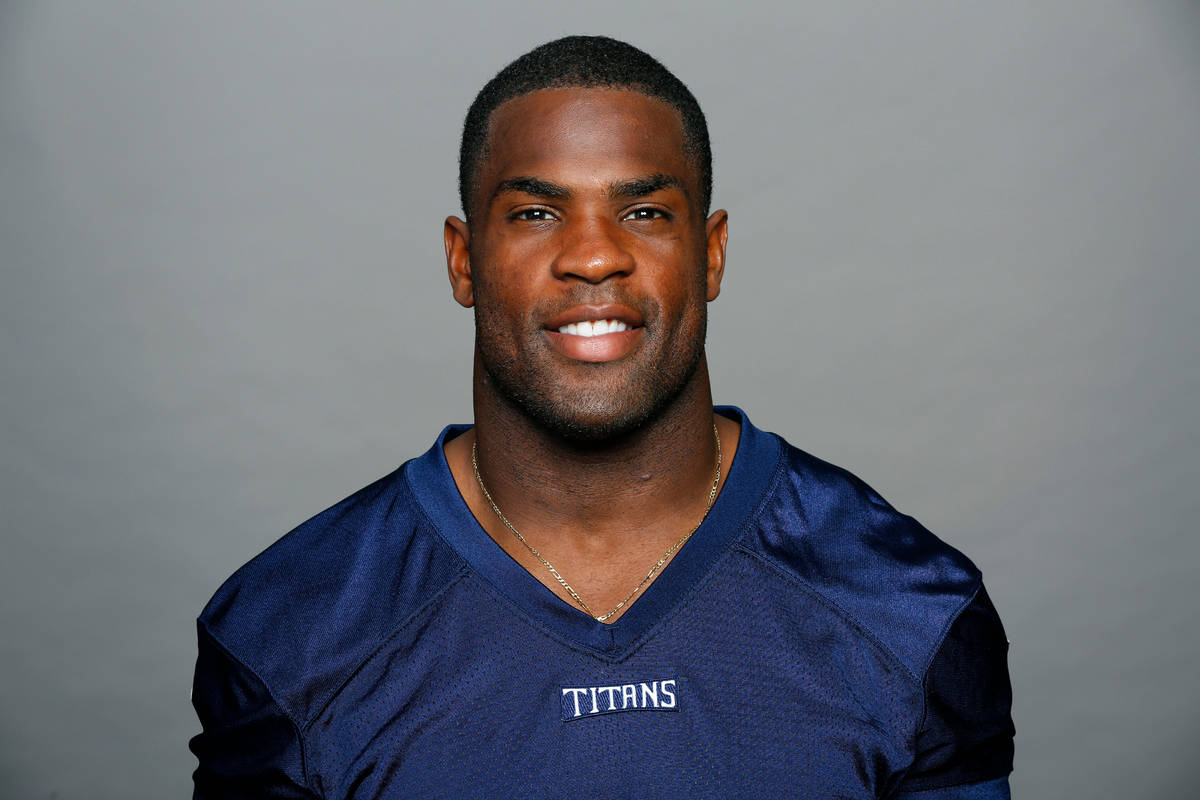 According to the somewhat underwhelming slogan that once appeared on license plates, Oklahoma is OK.

It usually has been much better than that on the football field. This is especially true at the running back position, where a couple of Las Vegans have excelled as Sooners.

First there was DeMarco Murray, who finished his Oklahoma career with 3,685 rushing yards, 50 touchdowns, 157 pass receptions and 1,462 yards in kickoff returns before playing in three NFL Pro Bowls.

The Sooners thought so much of the Bishop Gorman High product that they brought him back as running backs coach this season.

One of those who blossomed under his tutelage was Rhamondre Stevenson. The former Centennial High standout rushed for 186 yards on 20 carries and scored a touchdown en route to being named the offensive MVP of Oklahoma’s 55-20 rout of Florida in Wednesday’s Cotton Bowl.

Stevenson recently told the Daily Oklahoman that Murray was his favorite running back, but it had little to do with their Las Vegas upbringing.

“He just runs the ball really well,” said Stevenson, who missed most of his senior year after he and two teammates failed a drug test and were suspended by the NCAA. “He can catch it out of the backfield. He can pass block. He’s just a complete back to me, so I kind of looked up to him. That’s why he was my favorite back.”

Stevenson is a senior, but will have the option to play another season at Oklahoma because of the COVID-19 provision. ESPN NFL draft analyst Mel Kiper Jr. ranks Stevenson No. 2 among running back prospects should he decide to opt out.

I have a pretty good feeling who he might turn to first for advice.

A Dallas Cowboys fan from a young age, #Sooners running back Rhamondre Stevenson grew up rooting for DeMarco Murray.

Now, Stevenson gets to learn under the tutelage of the man he calls his "favorite back."https://t.co/bg0GmIXNRJ

— You never know who you might meet at torch level at Allegiant Stadium.

I introduced myself to one of the personal seat license holders who lit the Al Davis Memorial Torch before the Raiders’ last home game of the season. He said his name was Dave Pappas.

It was the same guy who played defensive end for UNLV when Wayne Nunnely was coach.

We were both at Nebraska in 1988 when the Rebels lost 48-6 after trailing the heavily favored Cornhuskers 10-6 at halftime. But of the two of us, Pappas was the only one who had a scar on his chin to show for it after being lit up on an onside kick.

Proud to be a @UNLVFootballF Board of Director member. Our group of dedicated men and women helped raise $100,000 for @UNLVSanchez and UNLV Rebel Football program. The money helps build our new world class $35M Fertitta Football Complex! #UNLVAlumni #Compete pic.twitter.com/3yv5Hwqa1o

— Becky Hammon, who made history by becoming the first woman to serve as an NBA head coach Wednesday after San Antonio Spurs coach Gregg Popovich was ejected in the second quarter of a loss to the Los Angeles Lakers, was a great player at Colorado State before she became Pop’s right-hand woman.

After coaching the Spurs to a Las Vegas Summer League victory a few years back, she still was harboring a bit of ill will for UNLV’s Lady Rebels when asked about her Thomas & Mack Center memories.

“Yeah. Losing my senior year. I remember that,” Hammon said about leading Colorado State to a 33-3 record and the NCAA Sweet Sixteen after losing to UNLV.

The versatile and personable racer was projected for stardom before being sent to prison for failing to testify in a 1986 drug smuggling case against his father. He drove in 53 IndyCar races, winning two, and qualified seven times for the Indianapolis 500. He also finished second to Mario Andretti in the 1983 Caesars Palace Grand Prix.

John Paul, Jr. was the last Indy car driver to lead a race with a Menard/Buick V6, at the 1996 IRL Vegas race. He did it with this cool looking ‘93 Lola, and raced competitively against the ‘95 cars. https://t.co/bM63BZewmt

Everyone at IMS extends their sincerest condolences to the family and friends of Indianapolis 500 veteran John Paul Jr., a versatile and talented racer.

Five years ago, Christian Wood rented a suite at Caesars Palace for a draft party, only to go unselected by NBA teams. Which turned out to be only the start of a terrible night for the former UNLV basketball standout.

“I lost my girlfriend that night, too,” Wood said in an Instagram post. “I dropped her off at the airport and never saw her again.”

He gave no reason for the breakup. But if it had anything to do with Wood not being able to provide for the young lady while keeping his NBA dream alive in the D-League, well … during the recent NBA offseason, he signed a three-year deal with the Houston Rockets worth $41 million.

As someone responded under a photo showing Wood with his head in his hands on 2015 draft night: “Now she crying.”