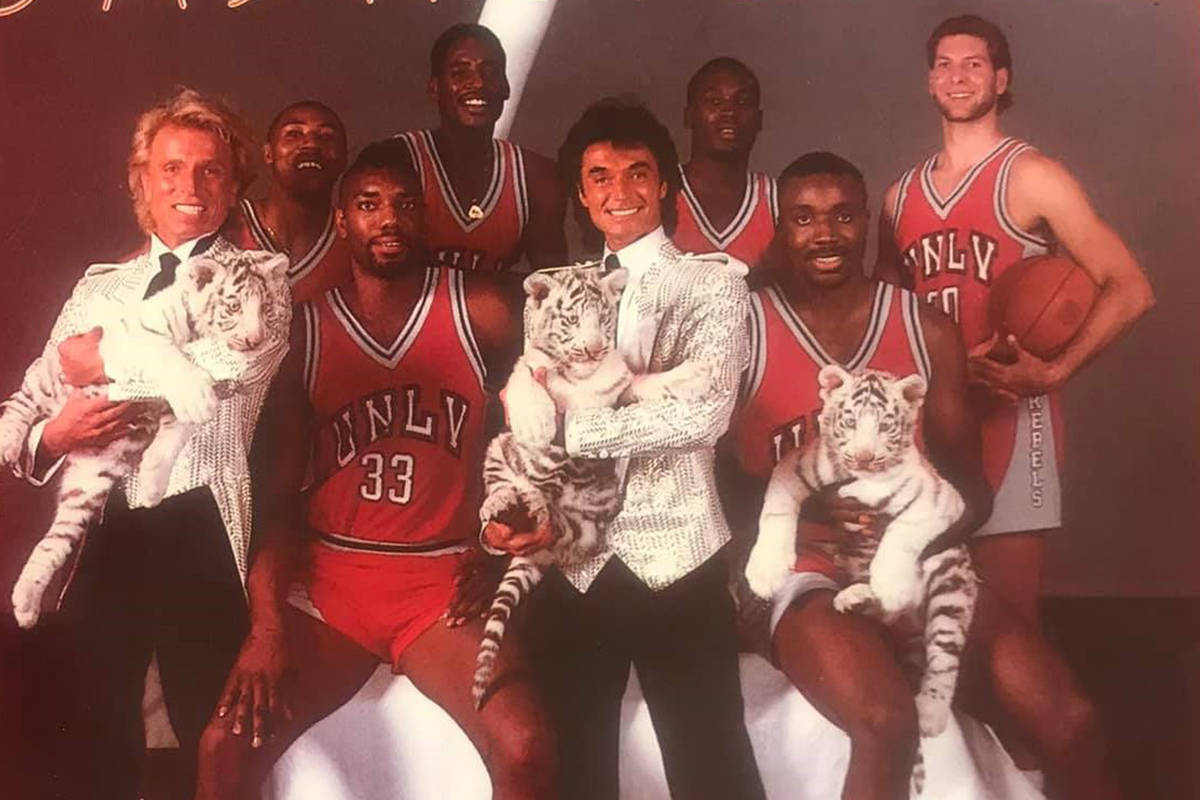 It was 1986 and magic was in the air at the Thomas & Mack Center, where the UNLV basketball team was about to embark on its second trip to the NCAA Final Four, and at the Frontier, where Siegfried & Roy were in the midst of a 6½-year residency.

After the Las Vegas icons pooled their respective magnetic personalities, there was magic on the cover of that season’s media guide, too.

When Siegfried Fischbacher died from pancreatic cancer this past week at age 81, it rekindled visions of that media guide and magical season for UNLV fans of a certain age — and for Joyce Aschenbrenner, the school’s former sports information director who orchestrated the photo shoot.

“The thing I remember most is when they brought the cats out, Armon Gilliam was deathly afraid,” she said of the white tiger pups who posed with the Rebels’ All-America forward and teammates Freddie Banks, Gary Graham, Mark Wade, Leon Symanski and Eldridge Hudson, along with Siegfried and Roy Horn, who preceded his sleight of hand partner in death in May.

Gilliam led the Rebels to a 37-2 record and the national semifinals, where they were beaten 97-93 by eventual champion Indiana. He would have a long NBA career before dying of a heart attack in 2011 at age 47.

“Armon didn’t want anything to do with any of the animals, even the little ones,” Aschenbrenner recalled. “The guys went over in their uniforms to take the picture, and people were going nuts because the Runnin’ Rebels were walking through the casino.”

It was a monumental meeting of Las Vegas icons and hottest tickets in town. Aschenbrenner was asked if Siegfried & Roy seemed aware of the team’s celebrity status.

The 1990 UNLV team was men against boys. I think they rolled Duke by 25 to win it.
The Thomas & Mack Center was the hottest thing in LV (behind Siegfried & Roy of course). You would've loved covering sports back then. We couldn't wait to get the LAT w Jim Murray the next day

— Dick Calvert is resting at home more comfortably after contracting COVID 19 during the holidays. The longtime UNLV public address announcer and Southern Nevada Sports Hall of Famer was complaining Friday about having lost his satellite feed before a big sports weekend. He’s still bedridden, but his voice sounded more loud and clear.

— Johnny Field, the former Bishop Gorman High star who played in 83 major league games for the Rays and Twins, has signed for a second tour of duty with the Australian Baseball League’s Brisbane Bandits. Field, 28, spent the 2014-15 season with Brisbane. The Bandits are managed by former Brewers catcher Dave Nilsson, who in 1999 became the first Aussie to play in the MLB All-Star Game.

— The Golden Knights’ Marc-Andre Fleury is tied for most NHL opening night wins (10) with Martin Brodeur and Curtis Joseph. Astute local hockey fans might recall that Joseph spent 15 games between the pipes for the International Hockey League’s Las Vegas Thunder in 1995-96, posting a 12-2-1 record and 1.99 goals-against average during a contract dispute.

— UNLV forward Marco Gonzalez is on the list of eligible players for Thursday’s Major League Soccer SuperDraft. He started his high school career at Valley and finished at a prep school in Arizona before joining Rich Ryerson’s Rebels.

List of players eligible to be selected in this year's #SuperDraft: https://t.co/5t2KsqRGUI pic.twitter.com/Cfsi2sPIAL

— NFL draft analyst Mike Renner used the Mountain West and a popular video game to put Nick Saban’s accomplishments at Alabama into perspective. “Nick Saban has reached the stage in ‘NCAA Football 14’ dynasty mode where you’re so dominant that it’s not fun anymore, so you start over with Wyoming,” he wrote in a Twitter message.

Twitter user James@OaklandAboveAll, commenting on the Nickelodeon network’s coverage of the NFL playoffs:

“They out here on Nickelodeon explaining what the redzone is, sayin’ you’re likely to score a touchdown. Just straight lying to all the kids of Raiders fans.”

They out here on Nickelodeon explaining what the redzone is, sayin you're likely to score a touchdown. Just straight lying to all the kids of Raiders fans