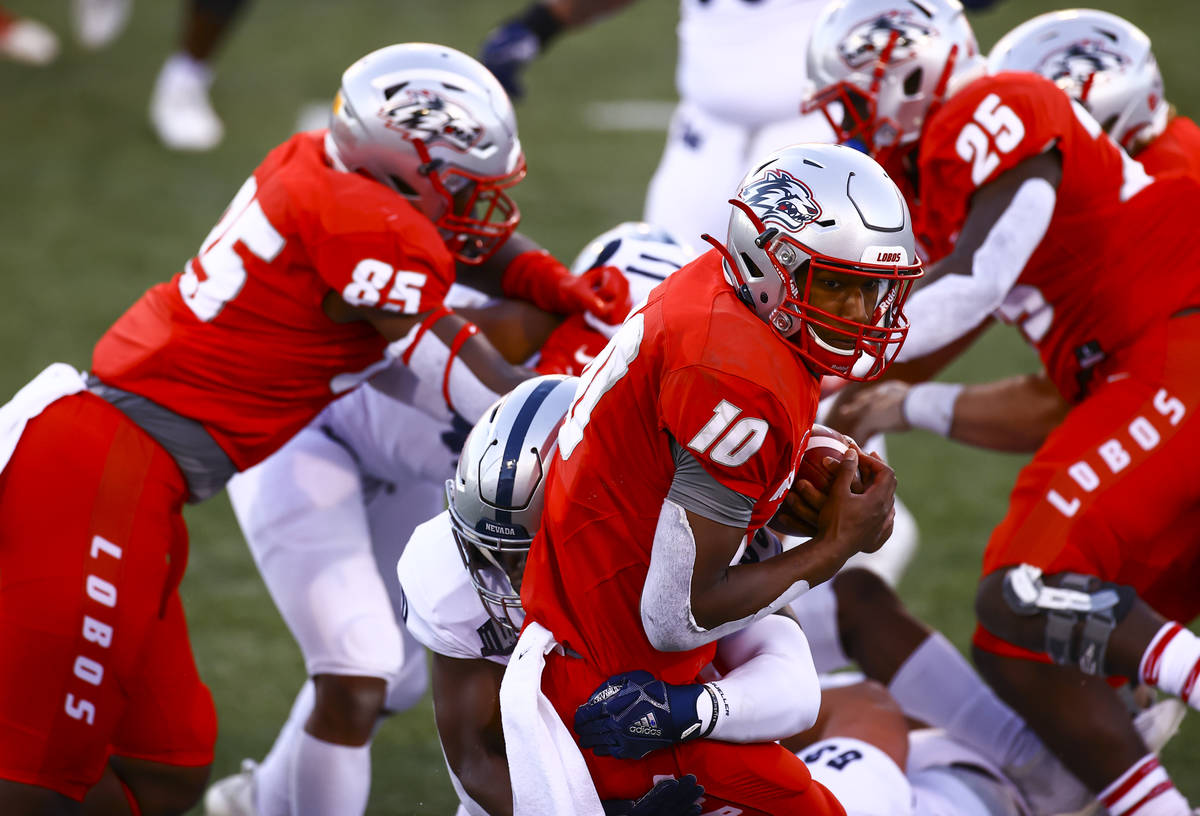 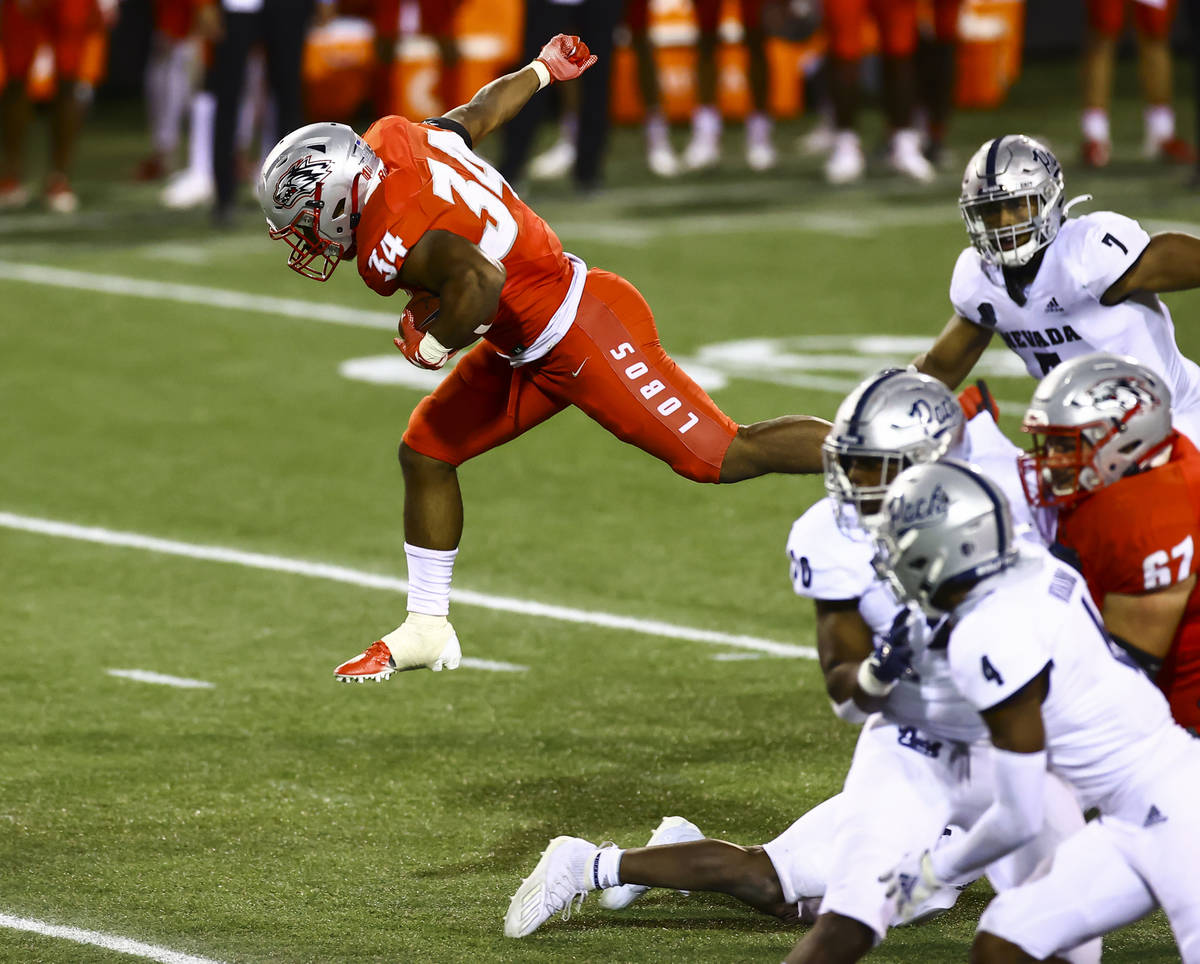 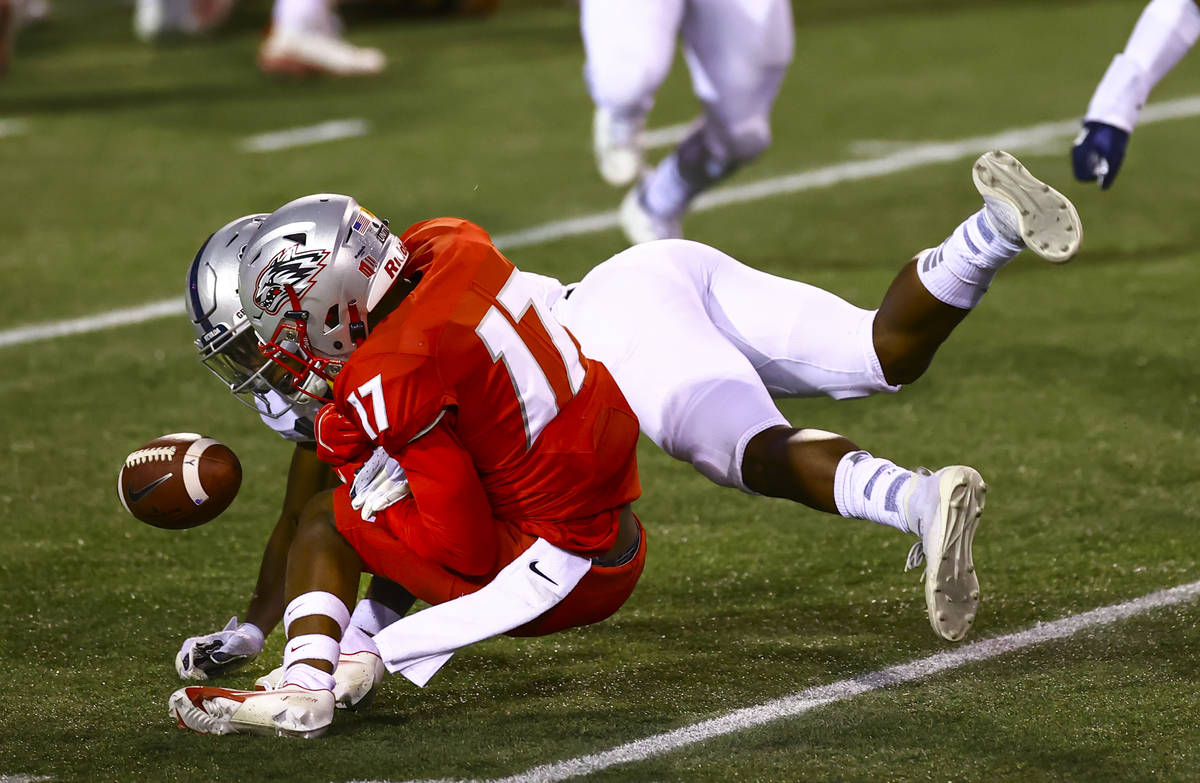 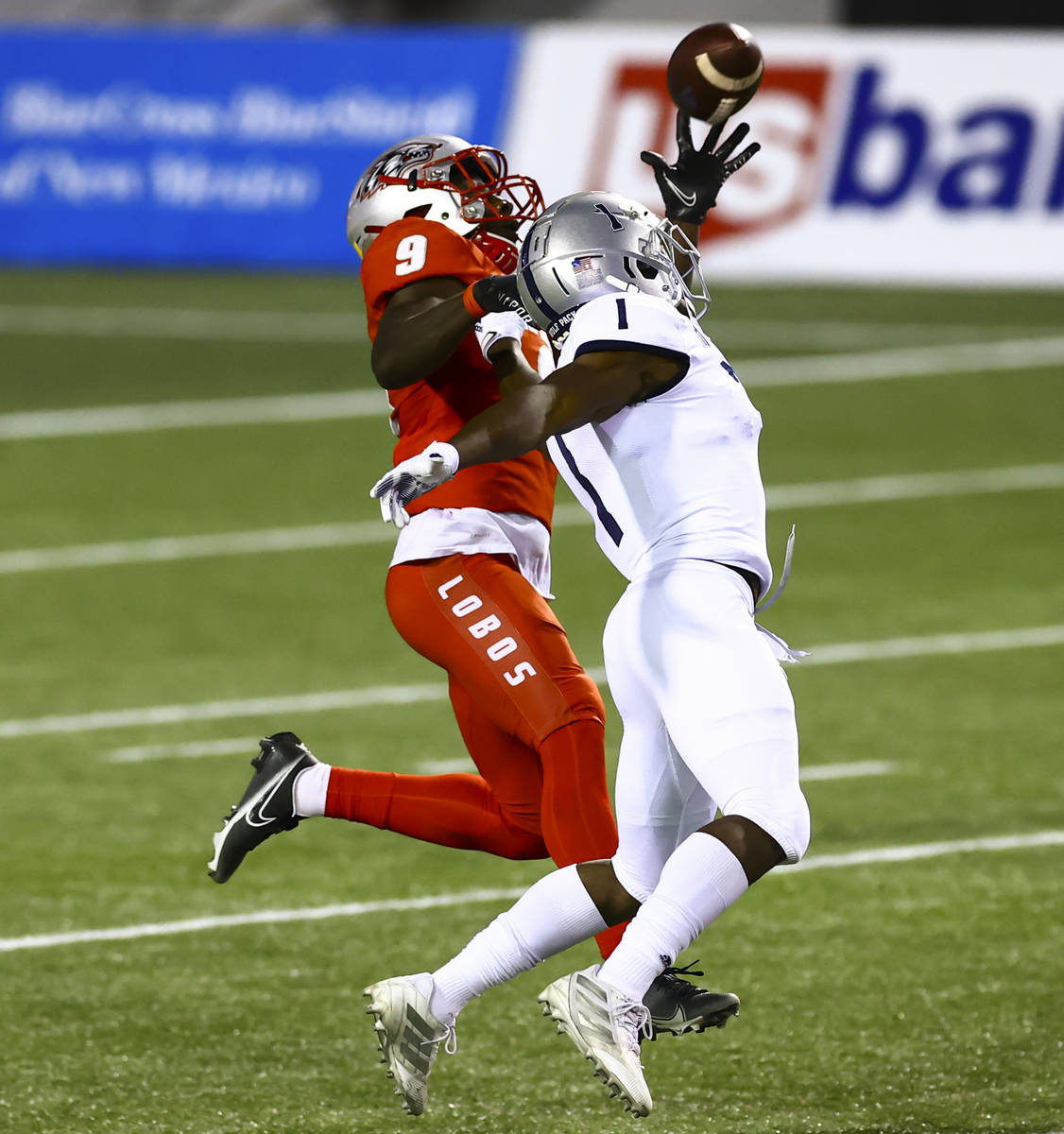 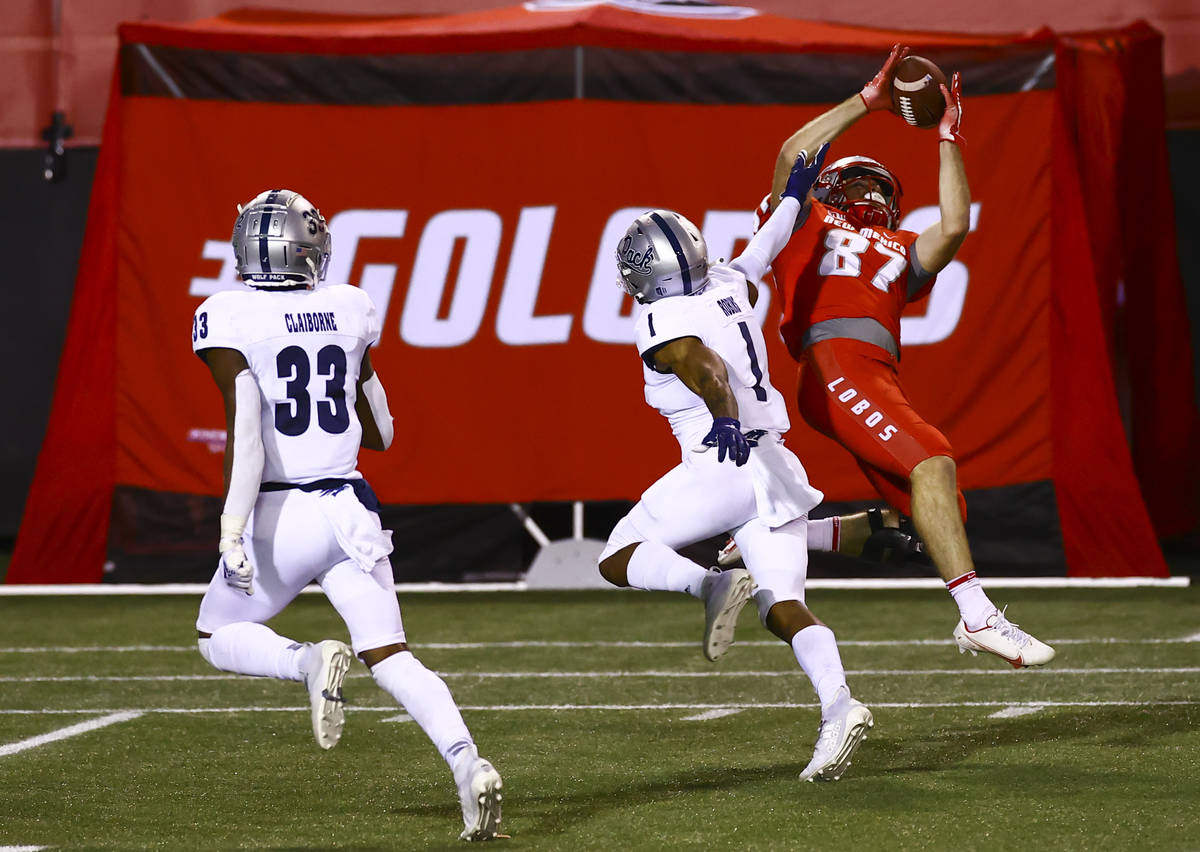 After the New Mexico football team’s 49-39 season-ending victory over Fresno State, it was disclosed that the Lobos had gone 7,000 days between starting walk-on quarterbacks — only to do it in back-to-back games to close their pandemic-riddled season in Las Vegas.

Even more astounding: New Mexico won both of those games with greenhorns under center.

But an even more remarkable statistic was the 0-for-42 they compiled while making Sam Boyd Stadium their home away from home. That’s 42 days spent here while the pandemic kept them from practicing and playing in Albuquerque and zero positive tests for COVID-19.

The craftsmanship and efficiency of the Lake Las Vegas bubble is nothing to be sneezed at. Not even at social distance.

“I’ll tell you what, the folks at the Hilton Lake Las Vegas were wonderful in helping us maintain that bubble,” wrote New Mexico sports information director Frank Mercogliano in a text message.

Before relocating to Southern Nevada — it cost New Mexico $70,000 a week to hole up here, an expenditure that was more than offset by playing games on TV that otherwise would have been canceled — the Lobos had eight players and a coach test positive.

They were zero for 3,811 swabs — Mercogliano keeps track of everything — at Lake Las Vegas.

“We are thankful to the folks at UNLV who did everything possible to make us feel at home,” he wrote. “It was a 42-day stay that none of us will ever forget, and I think we showed the nation how it can be done.”

— Las Vegas author Randy Cannon, whose most recent book on local auto racing, “Caesars Palace Grand Prix,” has been delivered to publisher McFarland & Company, did a few laps with the rhyming dictionary (and “Twas the Night Before Christmas” author Clement Clarke Moore riding shotgun) to summarize the year in auto racing that he shared in an email.

‘Twas the month before Christmas in the year 2020,

and the season wraps up, with weirdness aplenty.

In March, we all looked up a new word, “pandemic.”

From NASCAR to Formula One, and all in between,

Not a race to be found, the race venues cleared clean.

No teams, no fans, no podium glories.

But the racing returned, and the racers were tasked.

With trying to lure sponsors, while wearing a mask.

Slowly, then surely, the feeling came back,

The sounds, the cars, and the thrill of the track.

The Indy 500 marked a season restored,

While the headcount was bolstered with faces cardboard.

But champions were crowned in all series with wheels,

Then silly season, contracts, and some really weird deals.

And Sergio Perez made his Racing Point more pointed.

So the season concludes and the racing is done,

To the press, the drivers, and the great racing teams,

I wish all the best, and victorious dreams.

— Shane Steichen, who drew up plays for the Los Angeles Chargers during Thursday’s overtime victory over the Raiders as their offensive coordinator, once played quarterback for UNLV with his injured wrist encased in an elaborate brace that was compared to a jai alai cesta — a description that for some reason resonated with then-Rebels coach Mike Sanford.

A cesta is the wicker basket that jai alai players use to hurl the pelota, or ball, against the front wall of the fronton — the Spanish word for the jai alai court — at Henry Ruggs speed.

It turned out Sanford probably knew more about jai alai, an ancient sport that originated in the Basque region of Spain and was once wagered on at the old MGM Grand in Las Vegas, than he did coaching football. But give him credit for guiding the Rebels to 5-7 finishes in 2008 and 2009 — and for making a young beat writer’s day by acknowledging his esoteric reference to a nearly forgotten game.

— Fox sports talk personality Colin Cowherd has been teasing social media followers about returning to Las Vegas, where he once broadcast games for the Triple-A Las Vegas Stars and was sports director at KSNV Channel 3.

The move could be tied to Barstool Sports, a digital media company partly owned by Penn National Gaming in which Cowherd holds stock.

Ever feel like a city is calling you? pic.twitter.com/ixO58uophm

A paid obituary in Newsday, after the Raiders defeated the winless New York Jets on a Hail Mary pass from Derek Carr to Henry Ruggs:

MAZUR — Edward Michael, beloved husband, grandfather, uncle and friend, drew his last breath on December 9, 2020 mainly, we suspect, to avoid having to watch another Jets game …”

Hell of an obit for a Jets fan in Newsday… pic.twitter.com/ySDR2KoaFv