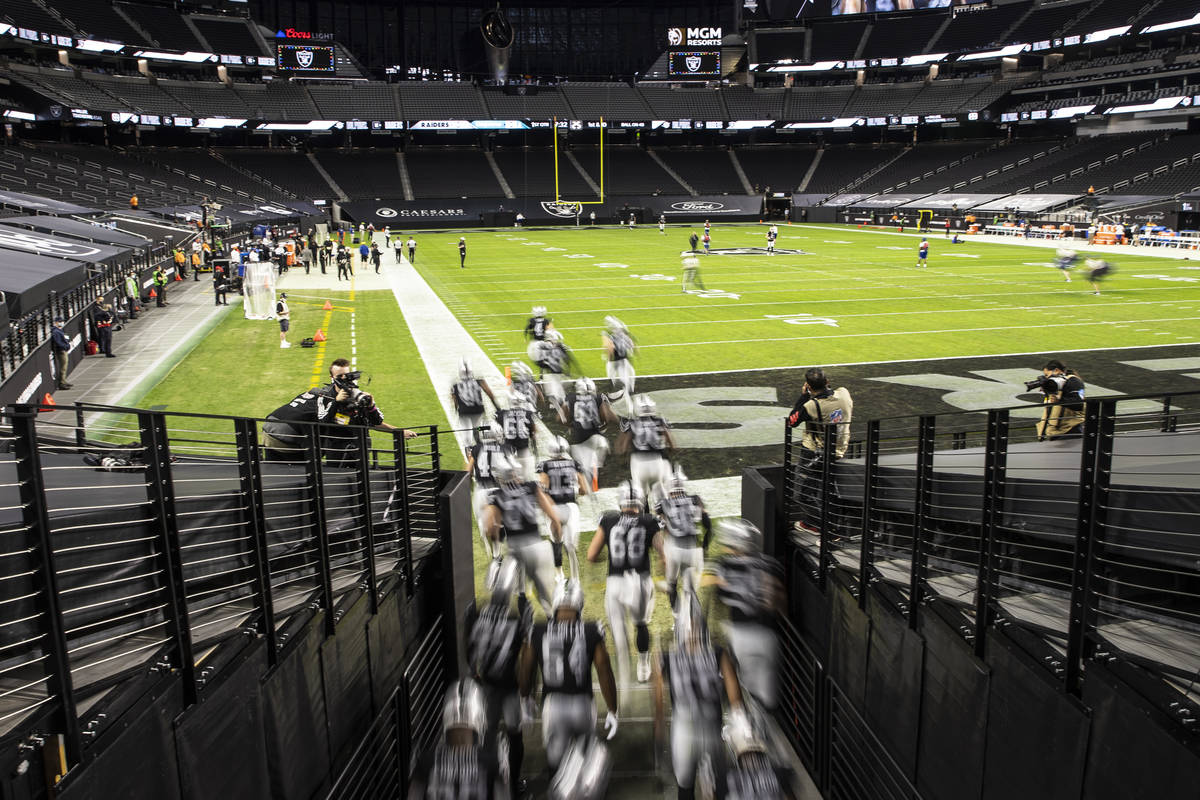 The Raiders take the field at an empty Allegiant Stadium during an NFL football game against the Miami Dolphins on Saturday, Dec. 26, 2020, in Las Vegas. (Benjamin Hager/Las Vegas Review-Journal) @benjaminhphoto 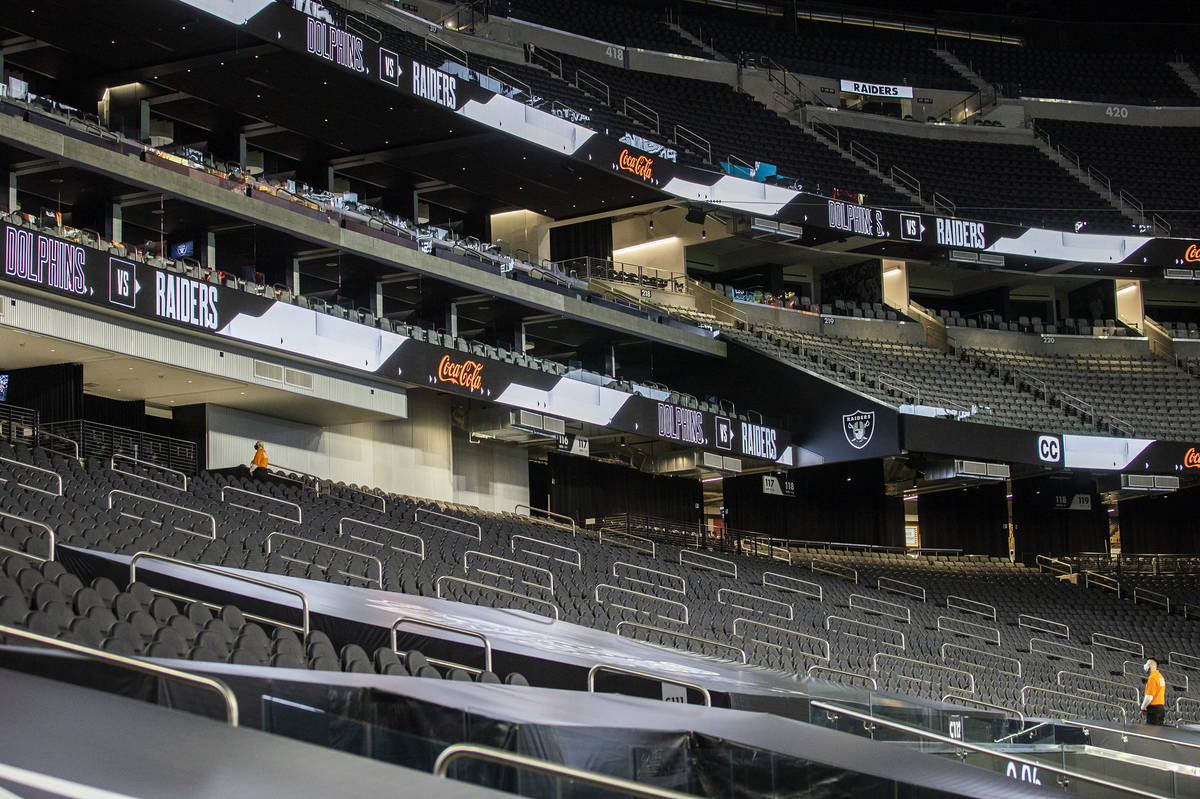 The seats at Allegiant Stadium are filled with a single usher during an NFL football game between the Raiders and Miami Dolphins on Saturday, Dec. 26, 2020, in Las Vegas. (Benjamin Hager/Las Vegas Review-Journal) @benjaminhphoto 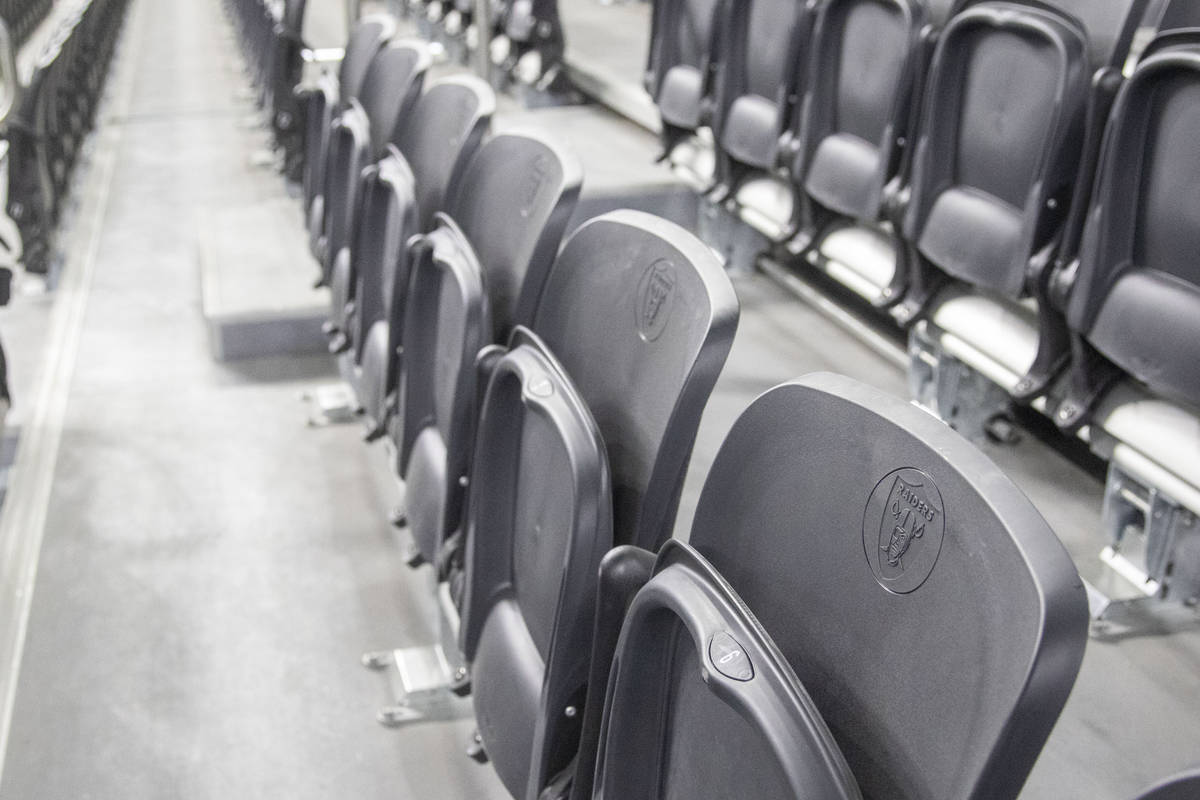 The Raiders logo is seen on empty seats during the fourth quarter of an NFL football game between the Raiders and the Miami Dolphins on Saturday, Dec. 26, 2020, at Allegiant Stadium in Las Vegas. (Heidi Fang/Las Vegas Review-Journal) @Heidi Fang

It was the contention of Bowie Kuhn, the former commissioner of baseball, that while it is possible to derive aesthetic value from a one-sided ballgame played on a quiet Tuesday afternoon, football is a game best played in front of a full stadium.

“You can watch a tight, well-played football game, but it isn’t exciting if half the stadium is empty,” the commissioner once said. “The violence on the field must bounce off a lot of people.”

The Raiders played their last game of 2020 in front of an empty stadium Saturday night. The violence on the field was abundant and reached a crescendo during the final 19 seconds when Raiders defensive end Arden Key grabbed Dolphins quarterback Ryan Fitzpatrick by the face mask and spun his head around like Linda Blair’s in “The Exorcist.”

But there were no people for the violence to bounce off of. Not with this virus still causing more problems than James Harden with the Houston Rockets.

Fitzpatrick managed to complete the long pass while looking through the ear hole of his helmet, and when 15 yards were added on to the gain, it set up a 44-yard game-winning field goal by Jason Sanders and a fantastic finish that would have made NFL Films proud.

But without the reaction from the crowd, it just didn’t seem like one.

This was my first Raiders game at Allegiant Stadium. It was almost unrecognizable from the last one I had witnessed in Oakland, which was the last one played there.

I was standing on the field near the goal line pylon on Dec. 15, 2019. The Jacksonville Jaguars had embarked on one of those inexorable drives that often lead to fantastic finishes. Decrepit Oakland Coliseum was a cauldron of nervous energy.

When the Raiders failed to provide any, the Jaguars scored the winning touchdown.

A basket of nachos whizzed by my ear. A glop of cheese sauce landed near the 5-yard line. A couple of fans leapt from the Black Hole onto the playing field and cops were forced used their batons.

There were 52,736 people in the stands. And two on the field for the violence to bounce off of.

Hopefully, we have now seen the last empty stadium for a Raiders home game.

It became abundantly clear Saturday night that whereas football people may have you believe the game is more important than the fans, the opposite is true. Without the fans, the NFL game-day experience is nothing to text your friends about in an effort to impress them.

The lack of energy is apparent from the moment you get off the elevator from the concourse to the press box. My first impression of Allegiant Stadium was how drab the gray and silver seats appear without spectators in them. It almost gives the place an institutional look.

With no warm bodies to absorb it, the thumping bass emanating from the public address system during pregame warm-ups dulls the senses. Even the NFL Films refrains and opening salvos of classic rock anthems by the Who sound distorted.

Other initial reactions: Las Vegas’ version of the Al Davis Memorial Torch is impressive, and when the lanai doors are opened to provide an unhindered view of the Strip, it will become Allegiant Stadium’s most distinguishing characteristic.

Based on what I saw of the San Manuel Club — somebody had left the door cracked open — the well-heeled and well-connected are also going to enjoy their game-day experience when it’s OK to have one.

Some of the mottos and catchphrases associated with the Raiders myriad Hall of Famers are prominently displayed on the suite level. One attributed to former Raiders coach John Madden says the only yardstick for success in our society is being a champion, and that nobody remembers anything else.

I know what the old coach was getting at. But I think I will always remember the season of the pandemic when the Dolphins ended the Raiders’ playoff hopes with a fantastic finish that didn’t sound anything like one.