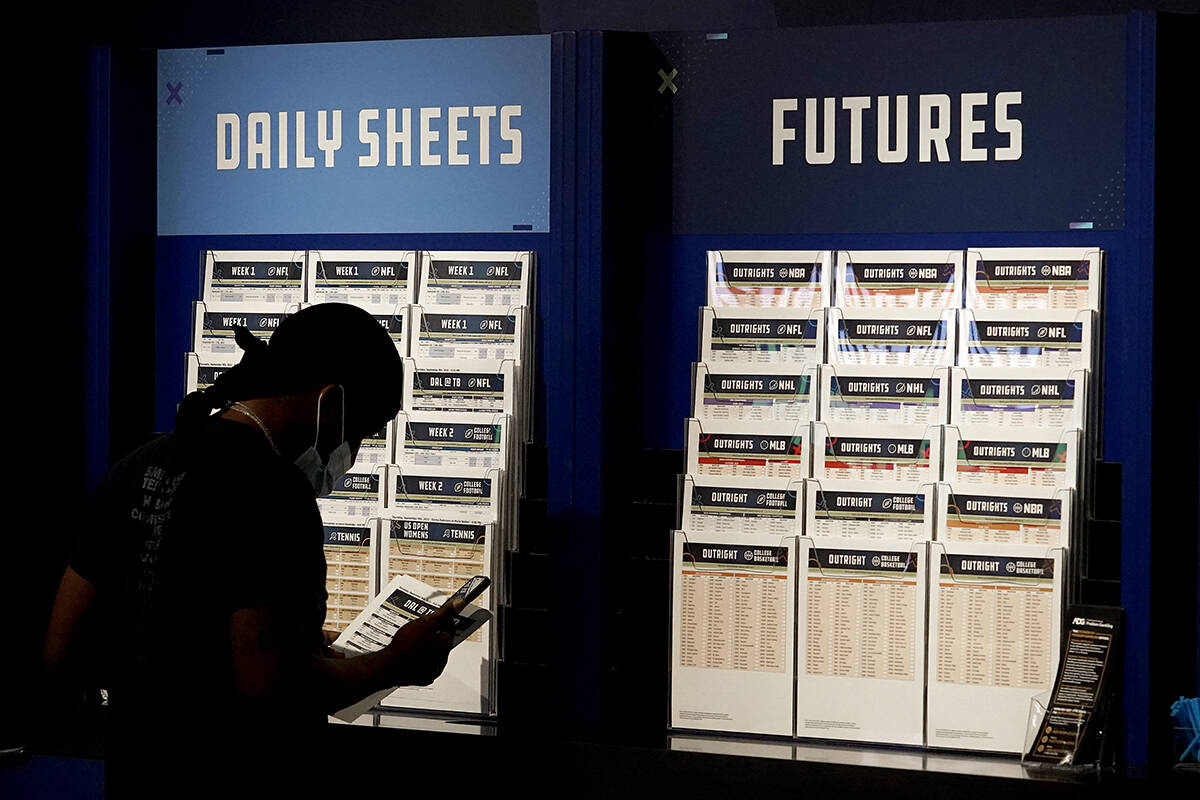 A customer looks over daily sheets inside FanDuel Sportsbook inside Footprint Center, Thursday, Sept. 9, 2021, in Phoenix. The Nevada Gaming Control Board on Wednesday, Aug. 10, 2022, unanimously approved a recommendation for Dublin, Ireland-based Flutter Entertainment Plc. and several of its divisions and subsidiaries, including FanDuel, to be licensed to collaborate in the operation of Boyd Gaming Corp.’s Fremont casino property in downtown Las Vegas. (AP Photo/Matt York)

Daily fantasy sports giant FanDuel is halfway home in its bid to establish a toehold in Nevada sports wagering.

The Nevada Gaming Control Board on Wednesday unanimously approved a recommendation for Dublin, Ireland-based Flutter Entertainment Plc. and several of its divisions and subsidiaries, including FanDuel, to be licensed to collaborate in the operation of Boyd Gaming Corp.’s Fremont casino property in downtown Las Vegas.

FanDuel is the first daily fantasy sports operation to seek licensing in Nevada.

In 2015, websites for FanDuel and DraftKings were prohibited from offering contests in the state after both companies argued their fantasy sports games were skill-based and not games of chance.

Backed with an attorney general’s opinion, the Control Board in October 2015 announced the two fantasy sports operations could not conduct business in the state unless licensed as gaming companies. Neither came forward for licensing — until now.

If approved, the collaboration between FanDuel and Boyd is expected to begin within a couple of months.

The Fremont sportsbook would adopt FanDuel branding, but existing Boyd personnel would continue to run the sportsbook. Under Boyd’s agreement, FanDuel would provide advice on odds and risk management through Boyd’s existing IGT sports-betting system.

Executives told regulators they have no immediate plans to introduce FanDuel’s mobile gaming technology in Nevada. A Boyd spokesman on Wednesday said the FanDuel partnership would only exist at the Fremont and not at Boyd’s other Southern Nevada properties.

Eilers &Krejcik last month reported that FanDuel is the top brand in 14 of the 15 states in which it operates with a nationwide market share of 47 percent of the gross gaming revenue generated in mobile sports gaming. It most recently started operations in Arizona, affiliated with the Phoenix Suns National Basketball Association team at Talking Stick Resort Arena in downtown Phoenix.

During Wednesday’s two-hour Control Board hearing, executives explained FanDuel’s bid to expand its commercial gaming operations from its existing 26 locations in 14 states. Half of those locations are through its affiliation with Boyd Gaming, which owns 4.5 percent of FanDuel.

The FanDuel sportsbook at Fremont, if approved, would have seating for 76 people and wagering would be provided by Boyd at four windows and seven self-service kiosks.

Regulators questioned several Flutter board directors and executives as well as FanDuel CEO Amy Howe, and noted all of them had clean background checks.

Howe, the former president and chief operating officer of Ticketmaster, has led FanDuel since last year.

She said most of FanDuel’s revenue is generated in sports wagering, while daily fantasy sports games are used primarily for player acquisition.

FanDuel has offices in its home base of New York, in Los Angeles where she is based and in Atlanta, Howe said.

She said the company has no plans to open an office in Las Vegas, prompting Board Chairman Brin Gibson to note that FanDuel rival DraftKings has an office and call center here.

The only concern aired by board members involved potential consumer confusion over which company players should approach with player disputes. Howe affirmed that FanDuel would have only an advisory role to Boyd Gaming in such matters.