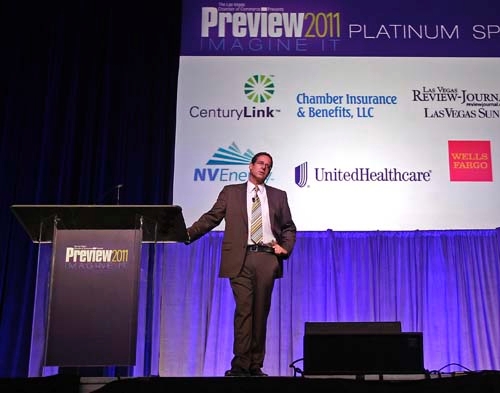 An eerie, disturbingly uncomfortable hush fell over the audience Friday at Preview Las Vegas 2011 after speaker Jeremy Aguero finished his tale about the rise and fall of a great economy.

The principal of Applied Analysis research firm described the next decade as a period of people leaving Las Vegas because they’re unable to find gainful employment, setting off further declines in home prices, more foreclosures and burdening the state with irreversible losses of tax revenue.

Nevada’s Legislature will cut deeper into education, health services and public safety. Funding for road maintenance and infrastructure improvement will have to be deferred.

The Ivanpah airport, an interstate highway to Arizona, solar power plants — they’re all good ideas, but for some other day, Aguero said.

A frustrated citizenry will launch initiatives to increase taxes on casinos and mining, some of which will work as intended and some that will miss their mark.

“Southern Nevada struggles to redefine itself,” Aguero said at the economic forum presented by the Las Vegas Chamber of Commerce. “There are good years and bad years, but clearly the best years are behind us.”

OK, maybe the Mayans had it right with their Living Prophecy of 2012 and it doesn’t matter anyway, Aguero postulated. Maybe California falls into the ocean and Las Vegas becomes beachfront property, or the Legislature taxes the state into oblivion.

Or maybe — just maybe — visitor counts continue to increase as they did last year, unemployment claims level off, business formation matches business closings, consumer spending increases and the state funds education to levels needed to improve upon our ranking of 46th in the nation.

“Economic development becomes a core focus … a broad effort to reposition the state to attract health care, renewable energy, logistics, information technology and digital entertainment.” Aguero said. “We have renewable energy at all four corners of the state and we export it throughout the West.”

Ultimately, Aguero’s theme for Preview Las Vegas was that momentum at the end of 2010 continues and improves into 2011, he said.

Robert Lang, director of Brookings Mountain West at the University of Nevada, Las Vegas, dovetailed his presentation into Aguero’s, talking about keys to Las Vegas becoming a world city. They include transportation links, a vibrant downtown, and demographic and economic diversity.

“Despite all the talk about diversity, the first concern is to preserve our core industry and that’s tourism,” Lang said. “Before we run off into diversity, let’s lock down this industry. What Houston is to energy, Las Vegas is to gaming and entertainment.”

Completion of the third terminal at McCarran International Airport will open Las Vegas up to global commerce and air freight service. It will bring more federal government jobs such as Federal Aviation Administration and Transportation Security Administration staff, Lang said.

Las Vegas experienced visitor volume growth in 15 of the past 16 months, with 1 million more visitors in 2010 than the previous year, though they’re not spending as much, said Rossi Ralenkotter, president and chief executive officer of the Las Vegas Convention and Visitors Authority. He projected 1 million more visitors this year and an economic impact of $643 million.

Las Vegas will always attract its core visitors, people who’ve been here before and know the brand, Ralenkotter said. The challenge is reaching the 44 million Millennials, those who recently turned 21 and have yet to visit Las Vegas.

“The core visitor to Las Vegas loves us. They’ve already been accepted into our fraternity or sorority,” the tourism executive said. “The persuaders are the ones we’re after. They need to be sure they’re doing the right thing with their money. They will spend, but they need to know what they’ll get. They want reassurance they made the right decision.”